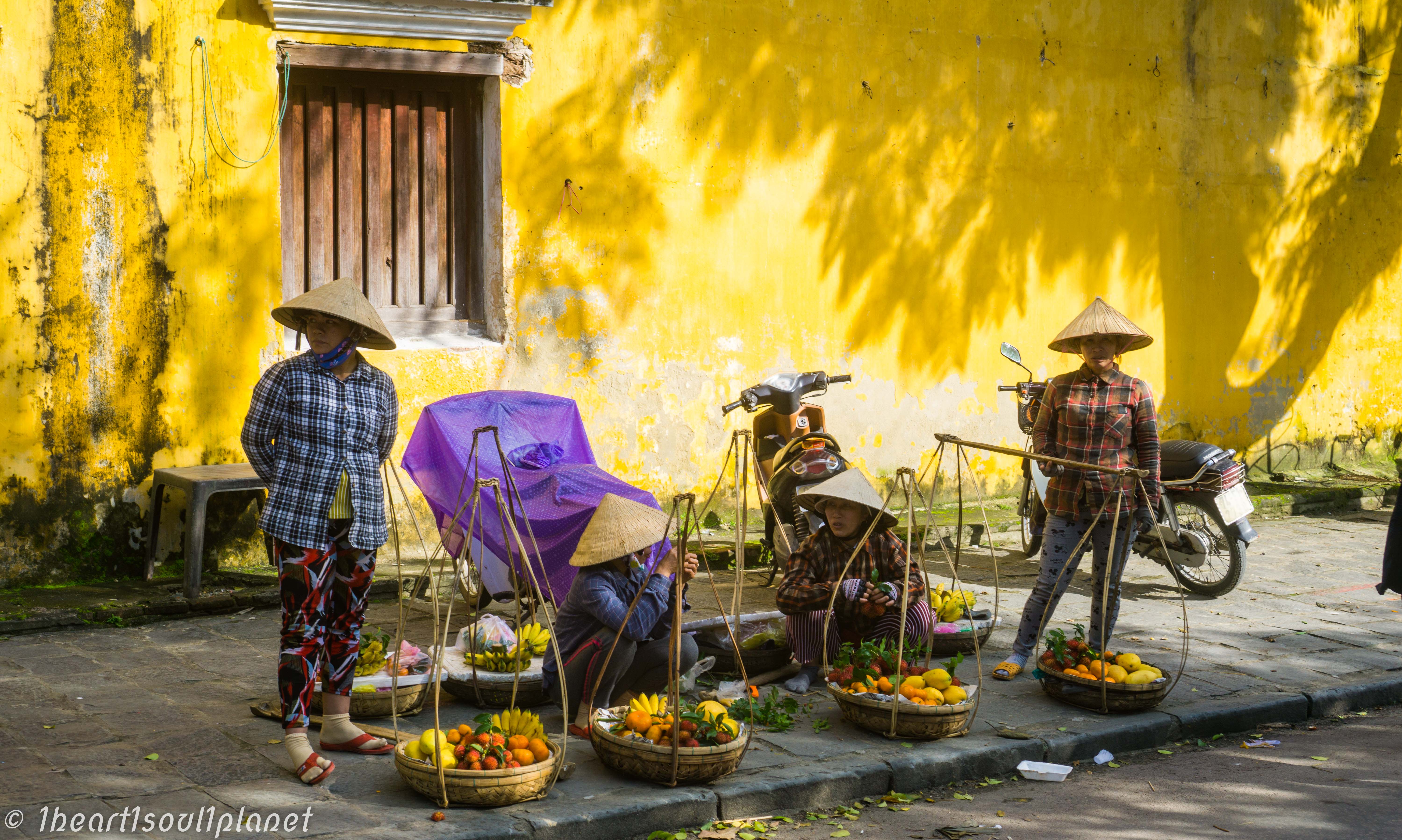 Vietnam looked cloudy even when we flew over it, nonetheless we enjoyed a beautiful sunset from the plane window.

We had to wait a couple of hours to get the visa and then again about half an hour for the stamp, but everything at Ho Chi Minh City’s airport was well organized and we were greeted by many booths selling sim cards, money or taxi rides.
Buying a sim card seemed like a smart idea and then we could Uber to our hotel. 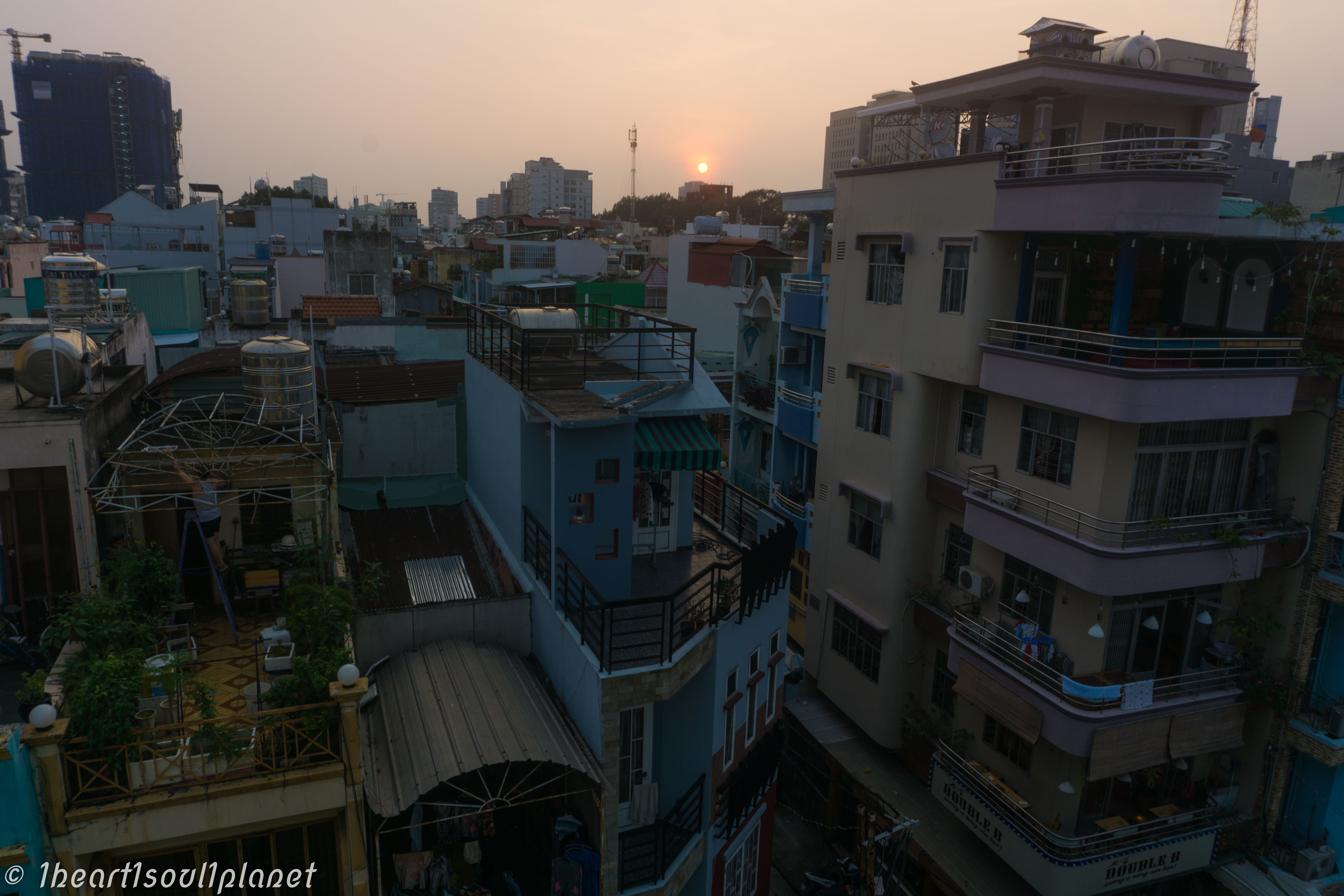 Since our friend from Switzerland was going to meet us some days later, we had booked almost a week in a room with two beds- or rather a bed and a mattress, but it looked comfortable enough.

The weather remained cloudy and since we’re not big fans of big cities, we didn’t do much more than sleep and eat, so I’m afraid there’s not much more we can tell you about.

Vietnam has great food and lots of vegan restaurants with mockmeat. We don’t know if it’s just Vietnam or if generally, the world is becoming a better place, but finding food had never been so easy.

When our friend arrived three days later, we showed him all the good places to eat and we also went to see the new Star Wars movie, which we loved, though the sound in the cinema was way too loud and gave all of us a headache. 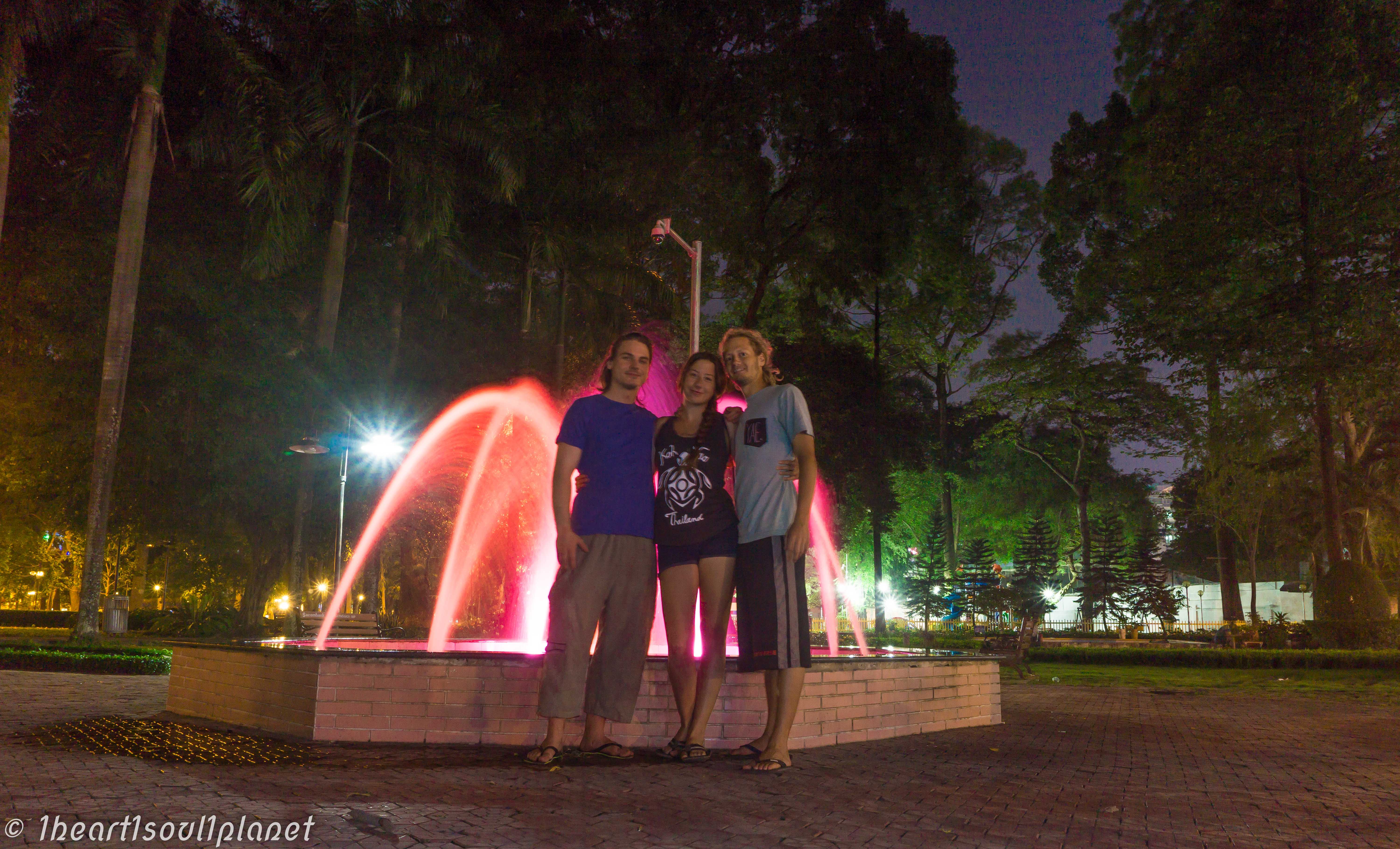 The Vietnam War museum is a must-see in our opinion, so we spent an afternoon learning about the war from Vietnam’s perspective.
It was shocking and the pictures of mutilated war victims left us in a very bad mood, but it was nice to finally read something else than America’s version. 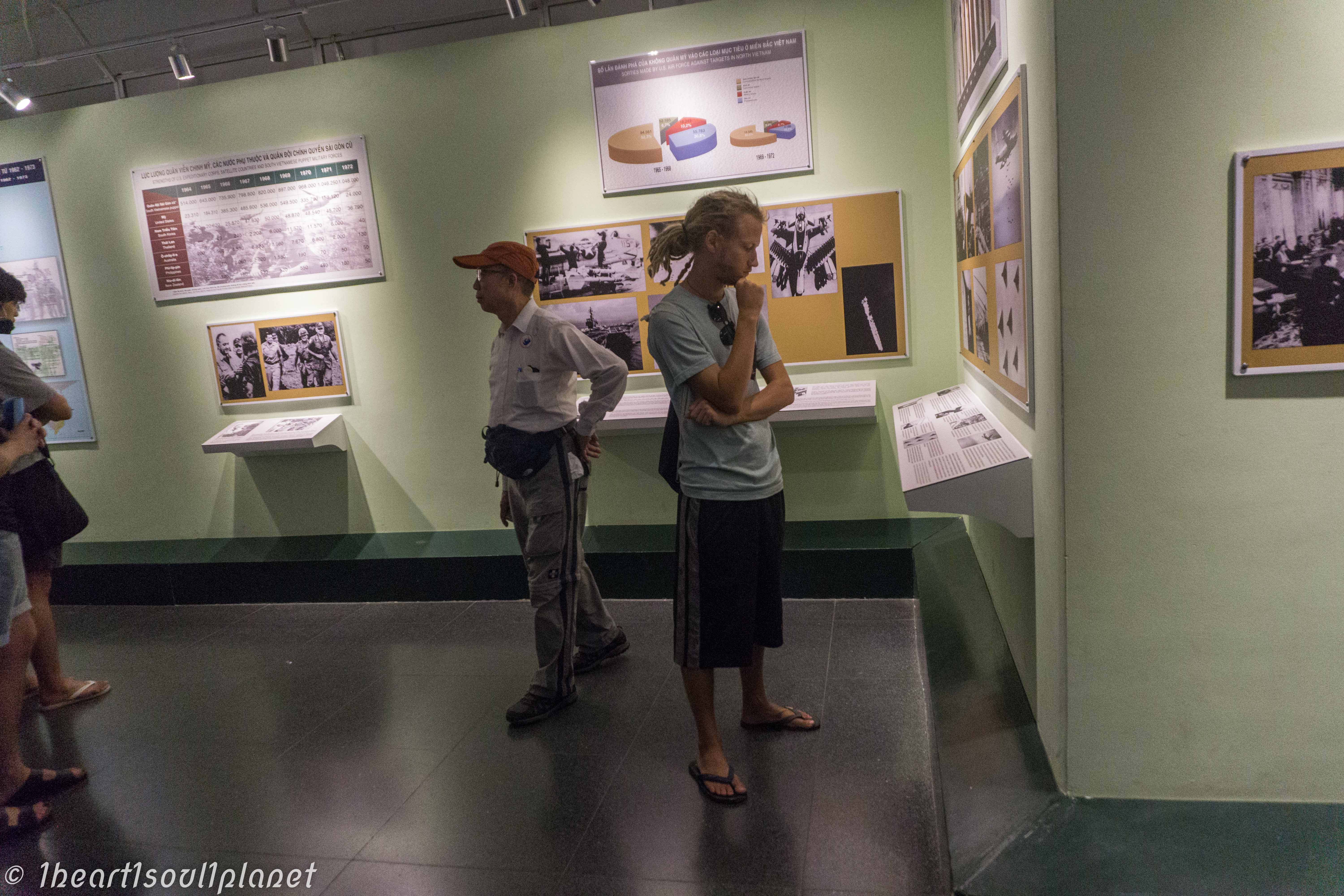 It was also very interesting to see how the whole world actually opposed the USA’s aggression war on Vietnam, but that only makes it all the more appalling, how long they proceeded to attack.

Lots of war crimes are also documented in the museum, such as whole villages being destroyed and its citizens, including children and pregnant women, being shot dead just for the hell of it.

All of that was so sickening to read and see, that we left out the part of the museum, where the chemical attacks are documented. 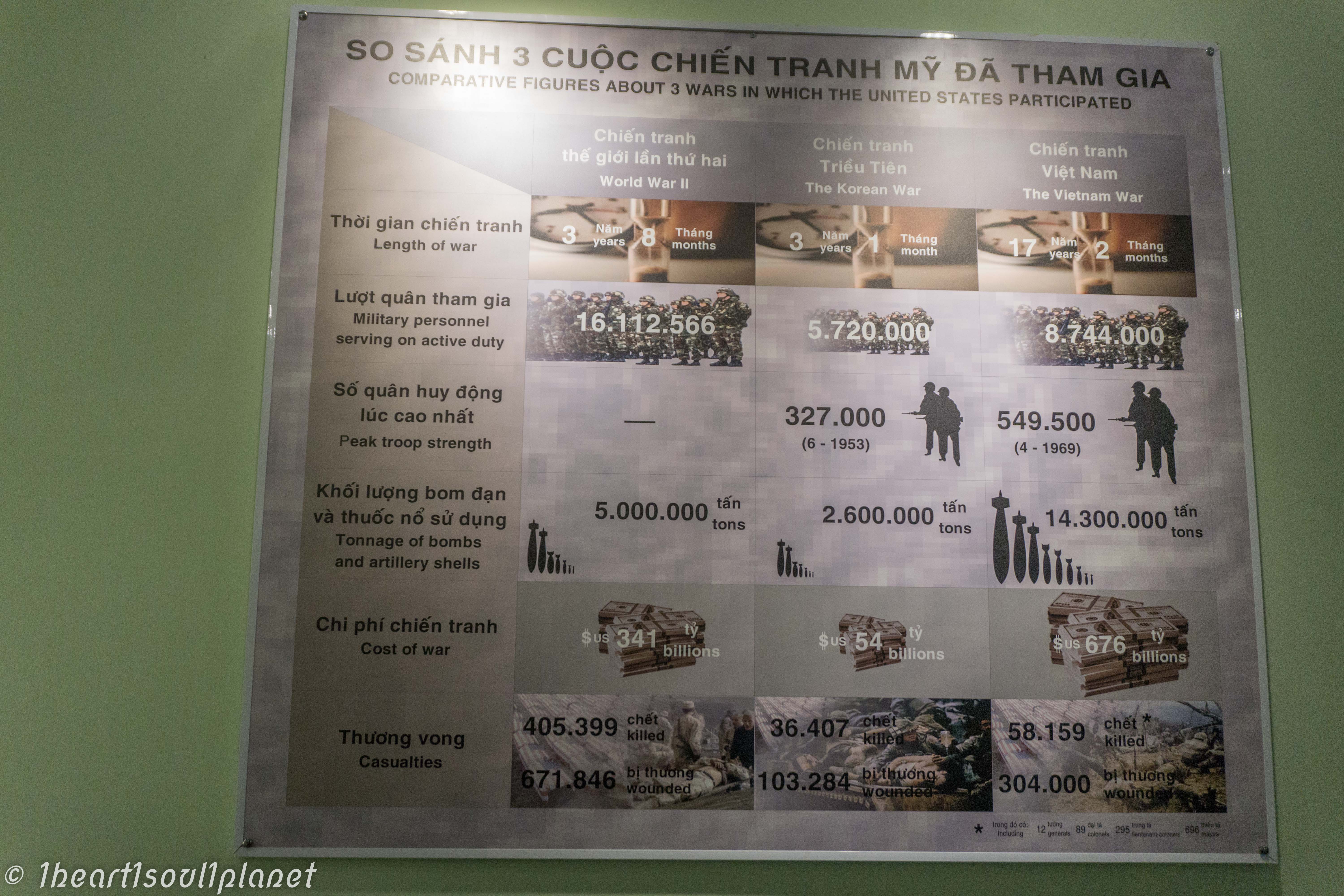 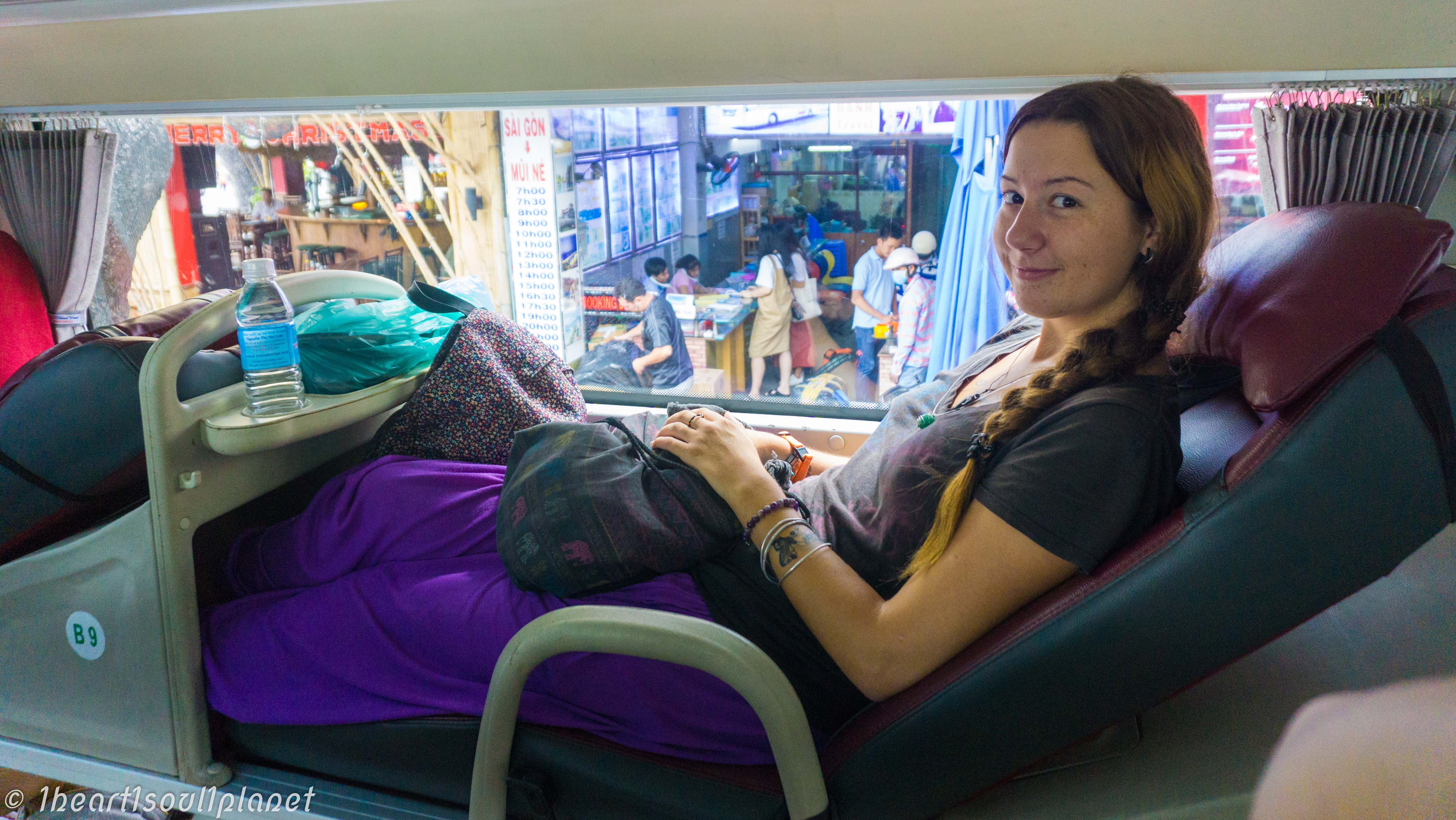 On the way, we came by a horrible accident. A motor bike had been hit by a bus and the dead victim was still lying on the road. Nici was sitting near the window and saw everything, but René and Chris were lucky enough not to see anything.

Still, we weren’t very lucky with the weather, but our guesthouse was really nice and had good wifi. The vegetarian restaurants were a bit far away though and we also wanted to explore the region, so we rented two motor bikes.

As soon as we were on the bikes though, on the way to the Red Sand Dunes, the police stopped us. They wanted over two million Dongs because apparently, we weren’t allowed to drive a scooter without an international driver’s license.
Of course, that was just an excuse, because other tourists were stopped as well and we witnessed one of them arguing with the police, because he had all the required documents but still had to pay.
We got the price down to 1 million Dongs in total though, so 500’000 per bike, which is about 25 dollar, and were able to pay it right away in cash.
When we asked for a receipt though, the police refused. We said we wanted a guarantee that they would not stop us again, but all we got was a handshake and the officer’s word.

The Red Sand Dunes were very nice, but we didn’t slide down. We got sand in our pants nonetheless, because we took somersaults for the camera. 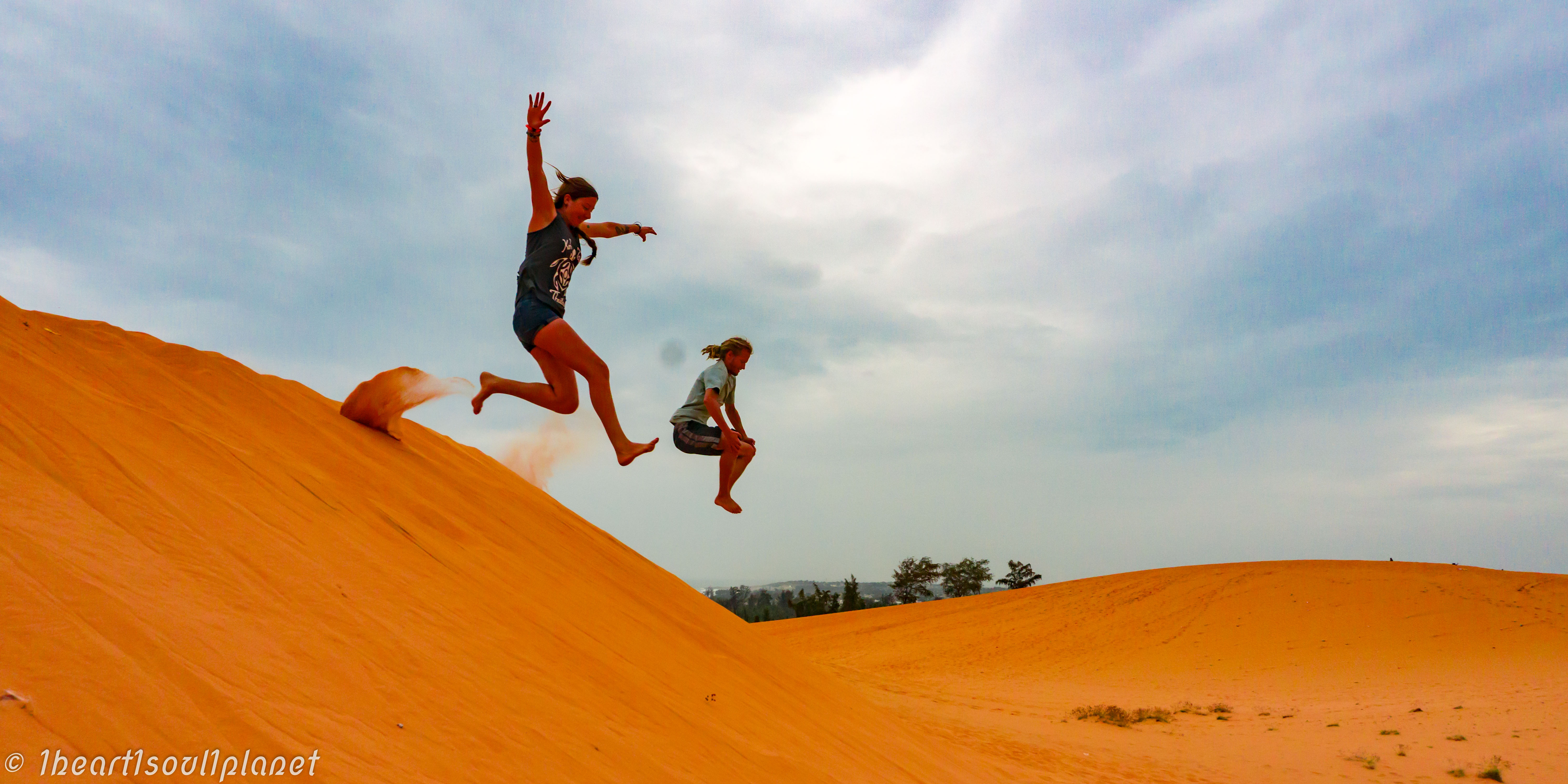 Then, we enjoyed a cool beer like we did all the time those days, since beer is really cheap here.

Later, when we were on the way to eat dinner, two motor bikes collided right next to us on the road. One just drove away and the driver of the other lost control and crashed. He and his passenger remained on the road, they moved but one of them couldn’t get up.
The three of us were shocked at first and not sure what we were supposed to do, since we didn’t know any emergency numbers in Vietnam. It didn’t take long until other locals approached and took care of the victims, so we walked on.
Our appetite wasn’t big after that, but beer helped to get the food down.

The White Sand Dunes was also something, we definitely wanted to see. The ride there was quite long though and again, we got stopped by the police.
We couldn’t believe it at first.
René and Chris had to sit down on plastic chairs and one of the officers told Nici to put away the camera, which she was carrying, probably afraid she would film how they asked us for bribes.
Surprisingly though, when René told them that we had already paid, they let us go without a fine.

Right in front of the White Sand Dunes, we came across another accident. Again, it looked quite bad, but at least there weren’t any victims to be seen and helpers were already there, so it was none of our business.

The dunes were crowded but still very beautiful and we got to enjoy another breathtaking sunset there. 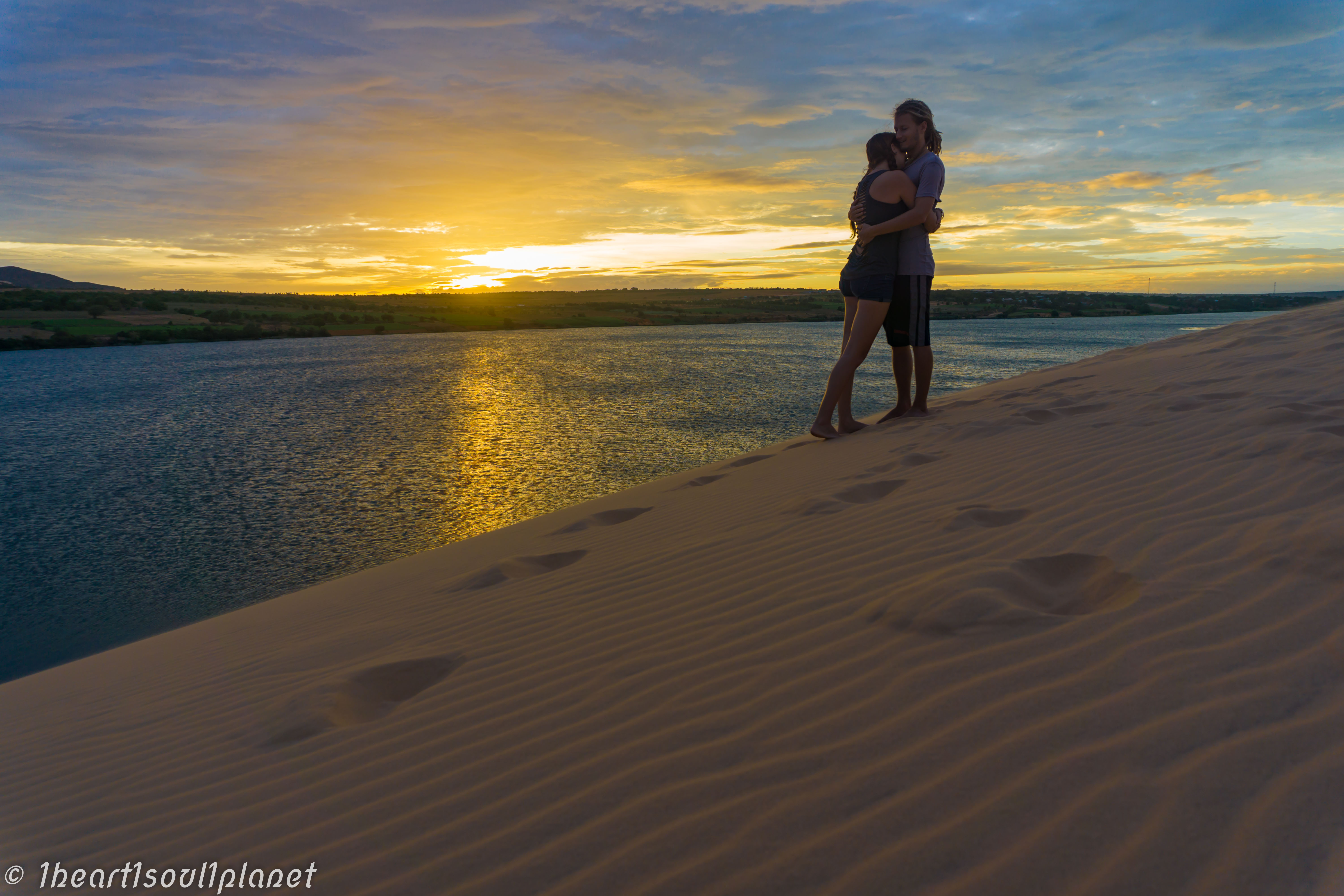 After Mui Né, we went to Nha Trang, which was an about five hours bus ride.

Nha Trang looked a bit bigger, with lots of high buildings and everything was excessively decorated for Christmas. 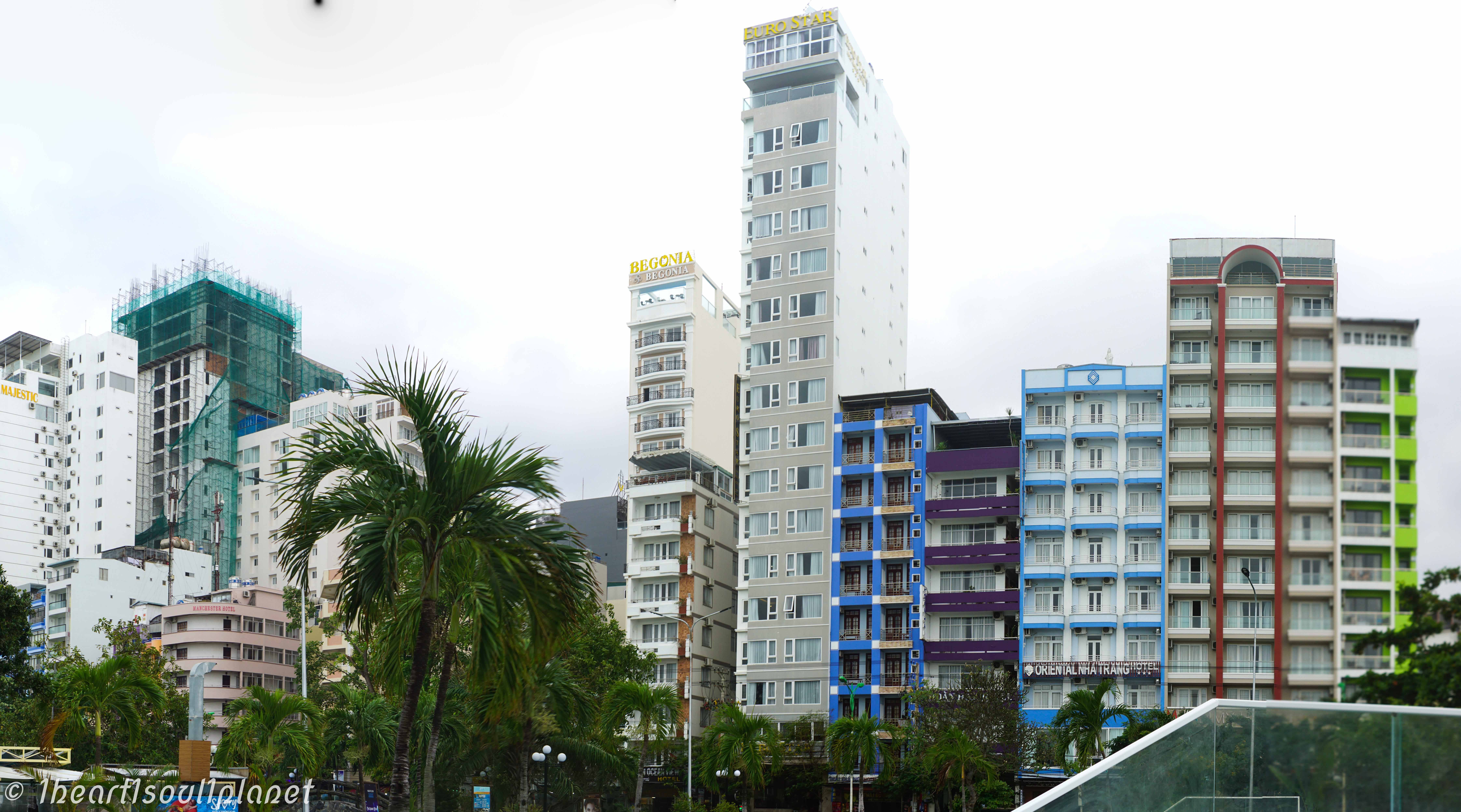 We stayed on the fifth floor of a hotel without elevator, which kept us fit.
That, and the walks, we took through the city, looking for food.
Vietnam can be tough for animal lovers, since restaurants keep living sea animals, including fish, in very small plastic tanks, until someone orders them. We even saw “live seafood” on one of the menus, which we interpreted as animals being served alive. In China that’s often the case. We can only hope that we misunderstood the menu and that this horrible way is not happening in Vietnam as well…

Google maps had said there would be many vegetarian restaurants, but we barely found any. Maybe they had closed recently. There was a food stand serving vegetarian Banh Mi, though, which is a Vietnamese sandwich. 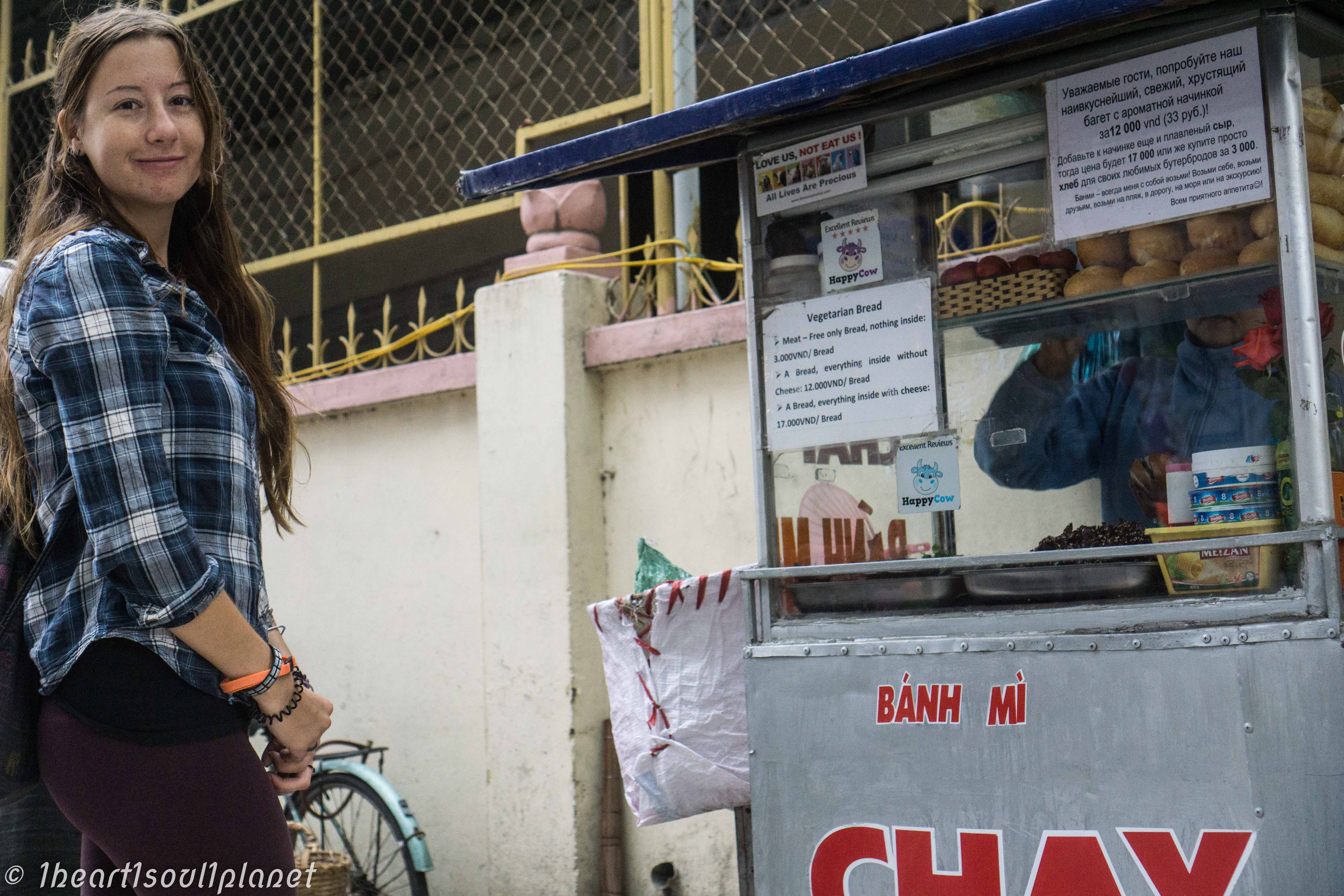 It wasn’t that bad though, because at least we got some exercise and reached our goal of 10’000 steps almost every day.

The weather got worse and the waves on the normally beautiful beach were too high to go swimming. We found a brewery on the beach though and had beer for breakfast, while one of the two typhoons, that hit Vietnam at the time, seemed to rip the brewery apart. Even the roof was leaking. 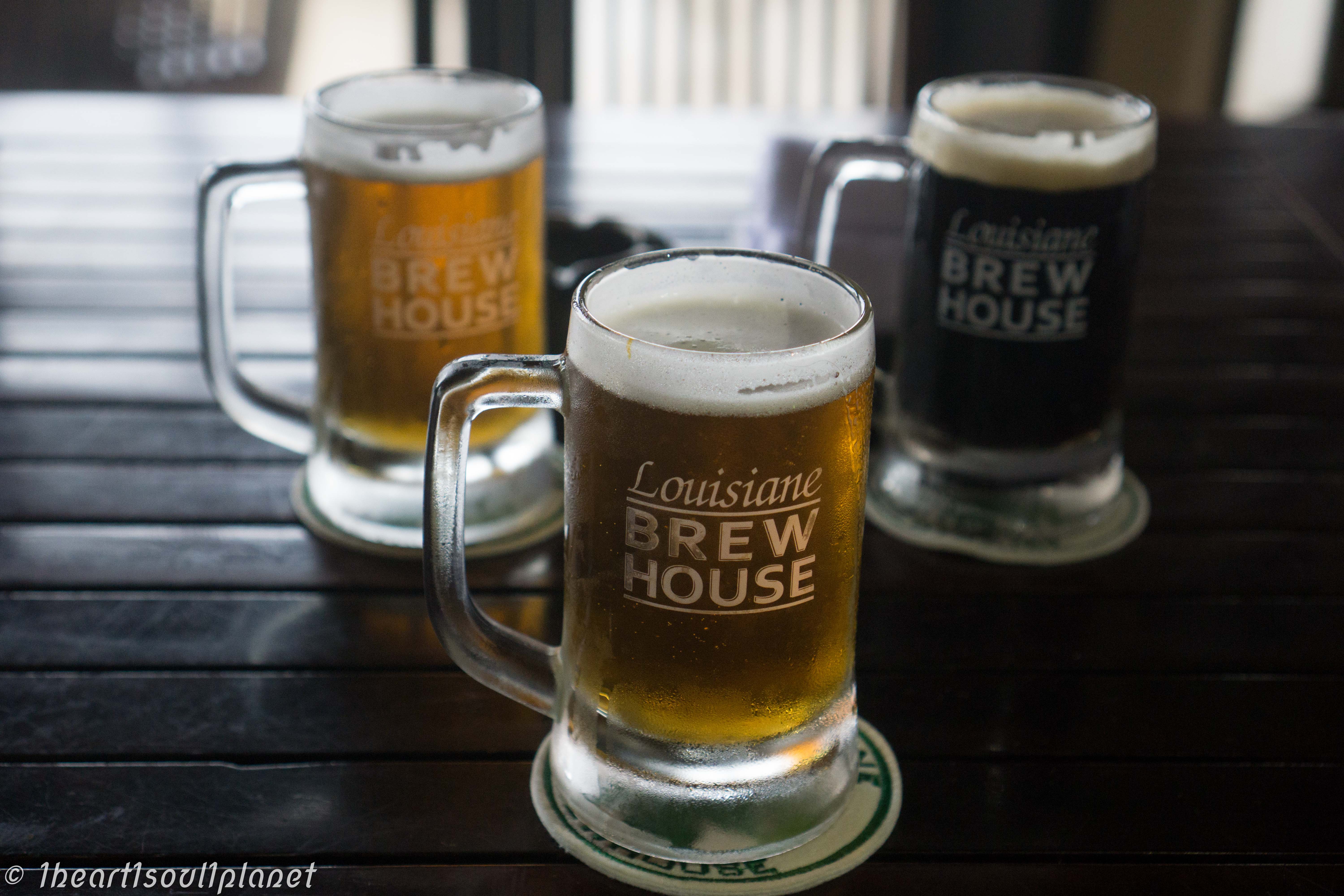 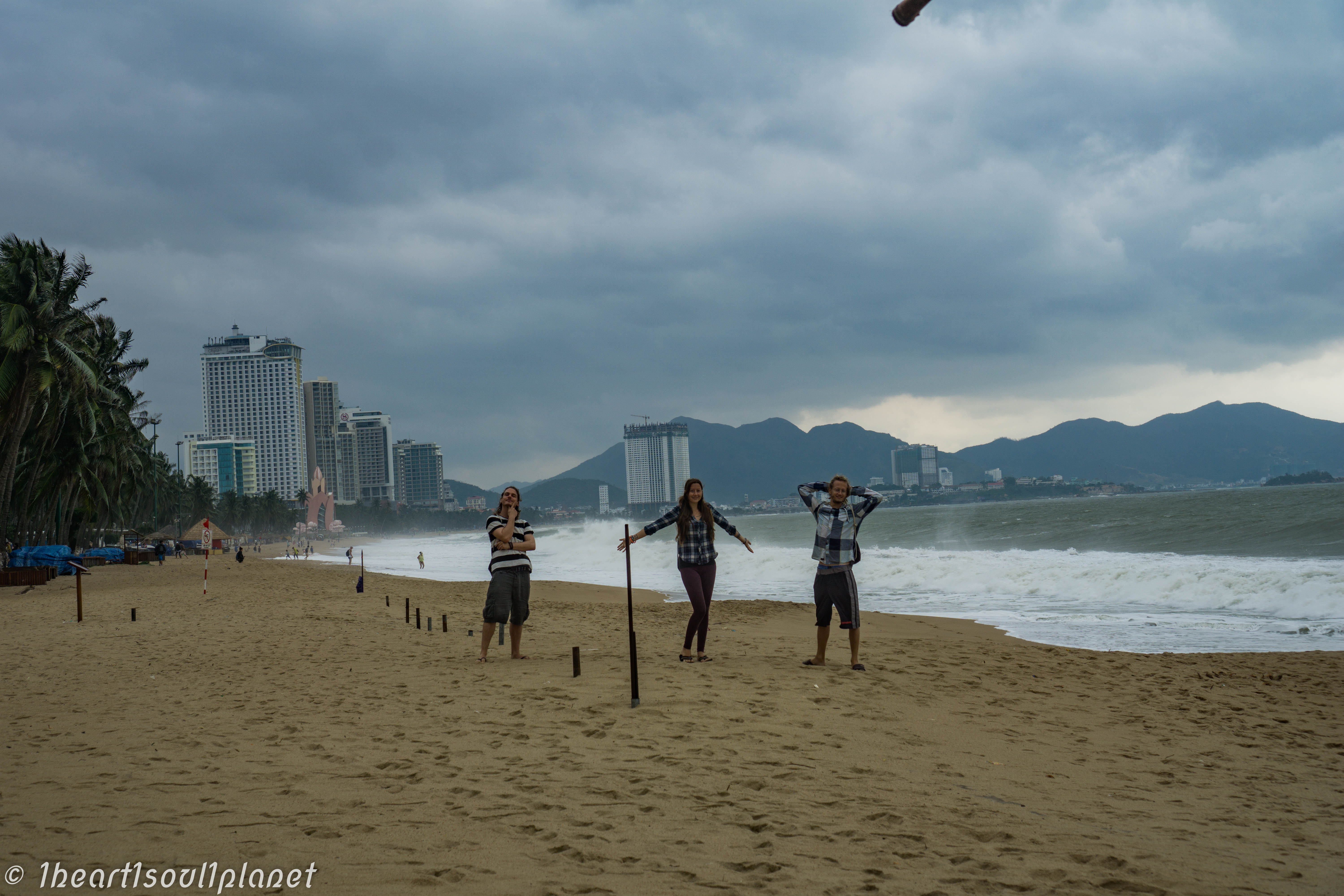 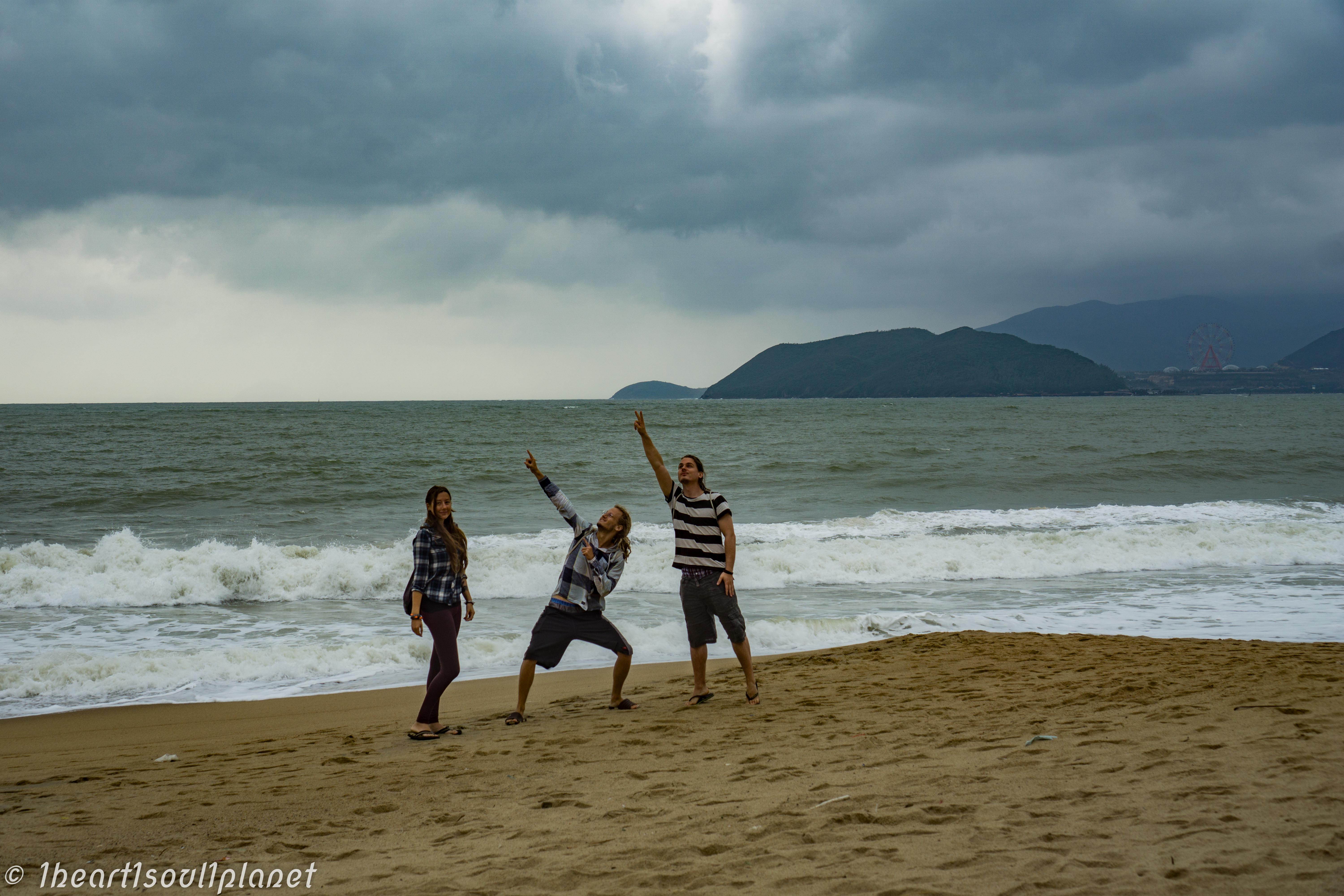 That called for another trip to the movies and this time, we watched the new Jumanji, which turned out to be hilarious. Even the sound was on a good level this time.

On our last day in Nha Trang, we cured our cold bones in a Spa and enjoyed a mud and mineral bath.

The next place on our list was Hôi An and the ride there was longer, so we took a night bus.

At least the storms seemed to be over, but the rain remained, even here, so much farther north.

Our accommodation was the Mina Le Villa, a very nice place right next to the river, only 200 meters away from a vegan restaurant and with extremely nice and helpful staff.

Nici was worn out from the trip and stayed in the room, emptying the mini-bar, while Chris and René strolled around to explore the town. They found a brewery and walked through Hôi An’s magnificent Old Town, which is traffic-free. 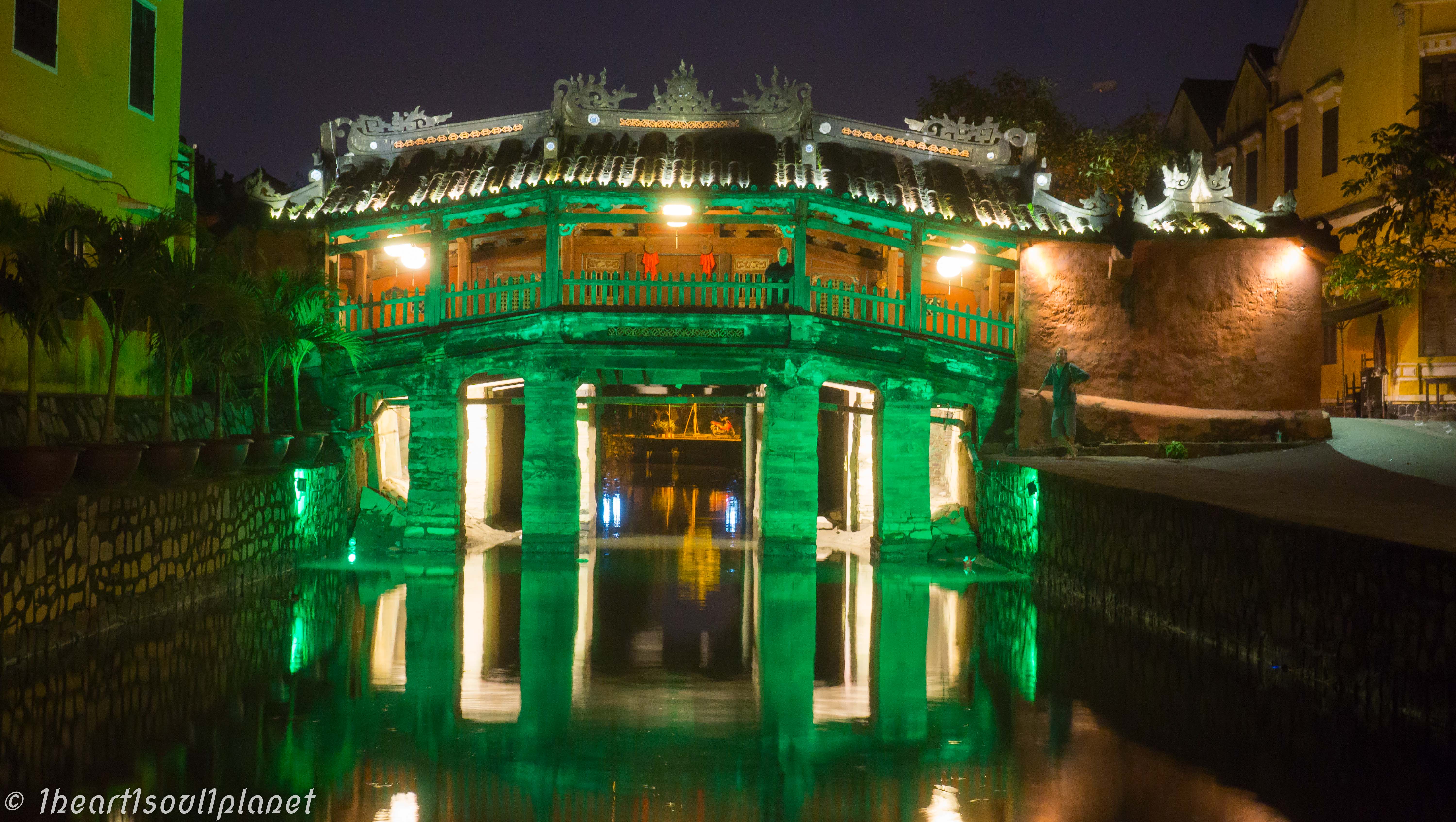 In the vegan restaurant, Karma Waters, we devoured Hot Dogs, Pancakes, Burgers and so on.

The sun made an appearance on December 31st, shining down upon us while we strolled around beautiful Hôi An.
Chris went to try on the suits, he had ordered, and took the opportunity to order three shirts as well. 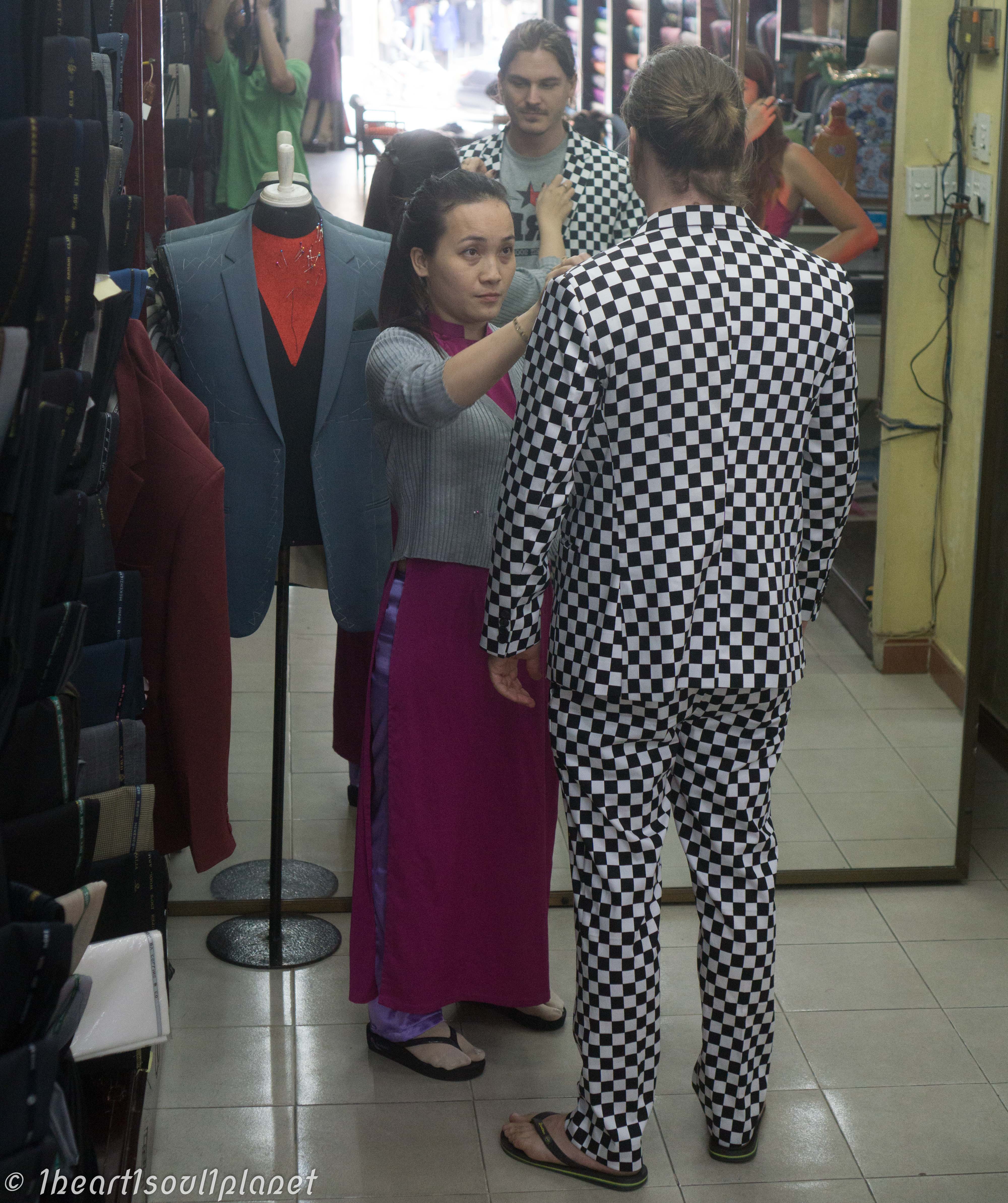 That night, we got invited by the staff of Mina Le villa to join their barbecue. We had already eaten, so it didn’t bother us that there was only meat, but nonetheless, they prepared tofu for us and we enjoyed the food as well as a lot of beer while talking to other guests of the hotel and the staff.
There was a lot of cheering and we learned how to say ‘cheers’ in Vietnamese.

For the countdown, we wanted to go to Hôi An’s Old Town and two couples, who stayed in the Mina Le Villa, joined us.

The area near the river was packed with people and we drank beer and had a good time, until the countdown came and Nici reached 100 beers on Untappd (an app for beer lovers), (not all were drunk in that night, of course.)

The excessive celebration of NYE led to a very lazy January 1st.

On January 2nd, we went to get lunch at the vegan café and had to “save” a woman from a very aggressive tourist, who attacked her for sitting down at his table. Well, that led to interesting conversations and then we took an Uber to the Marble Mountains, where we did a lot of walking and took some nice pictures. 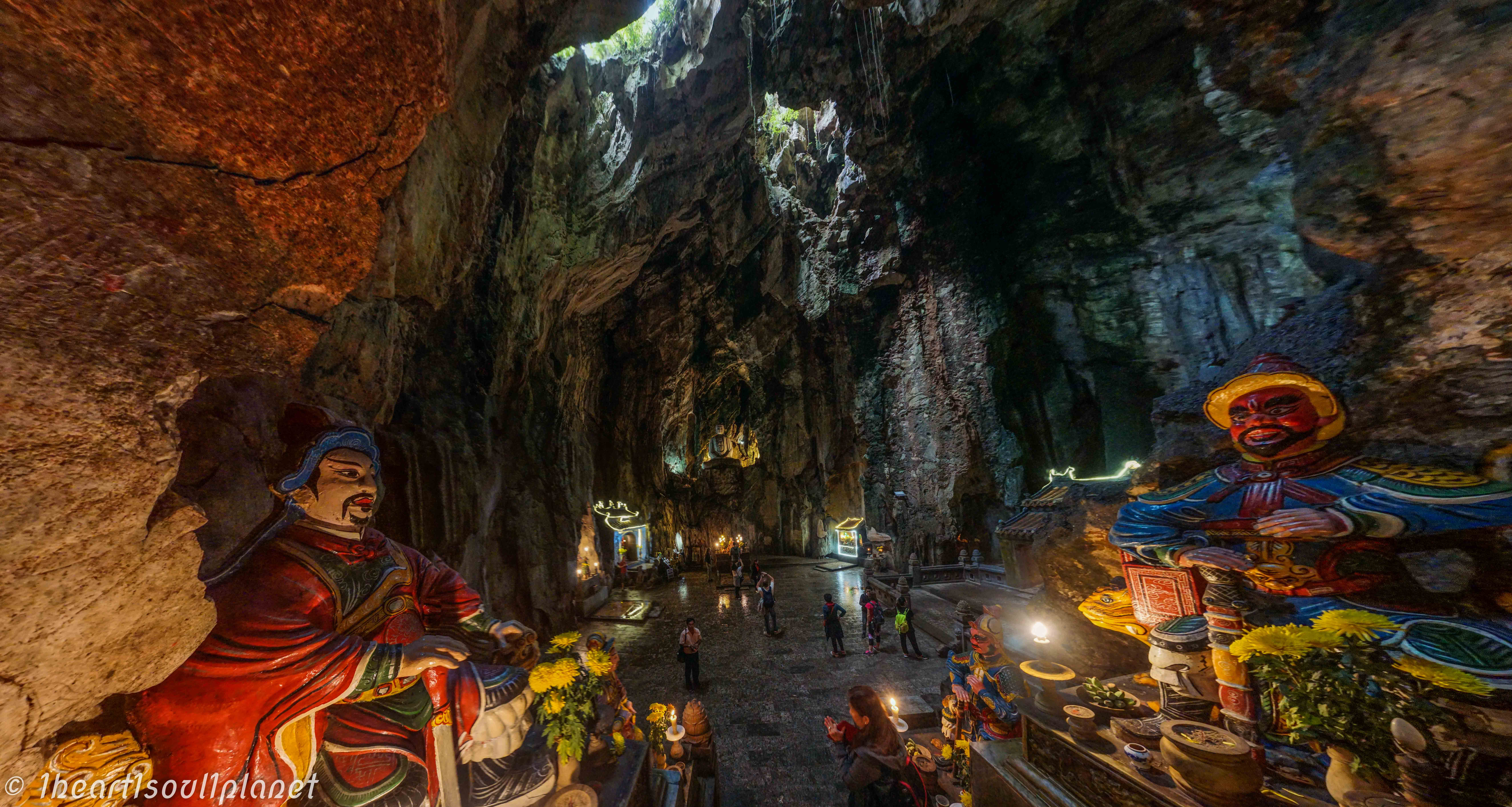 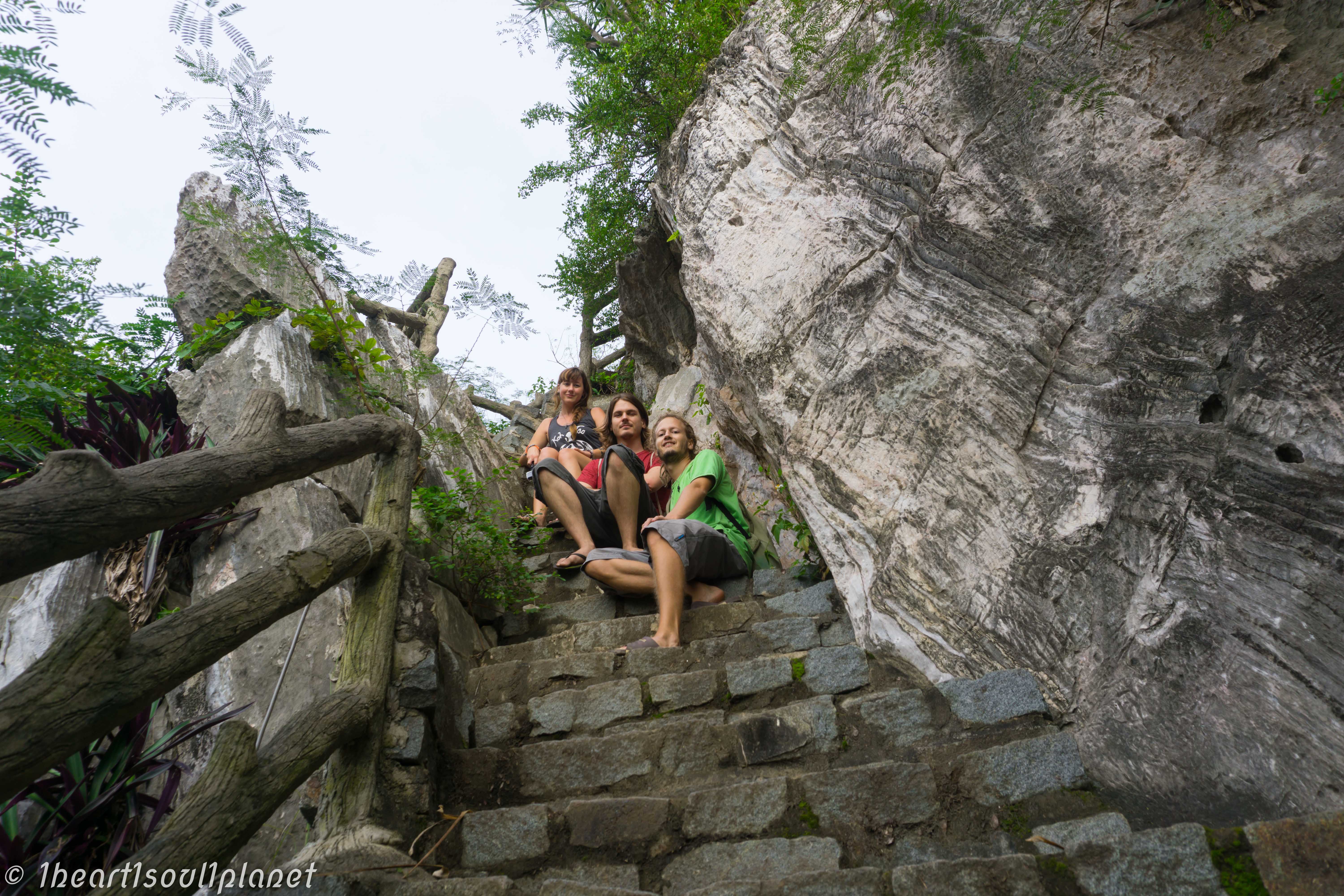 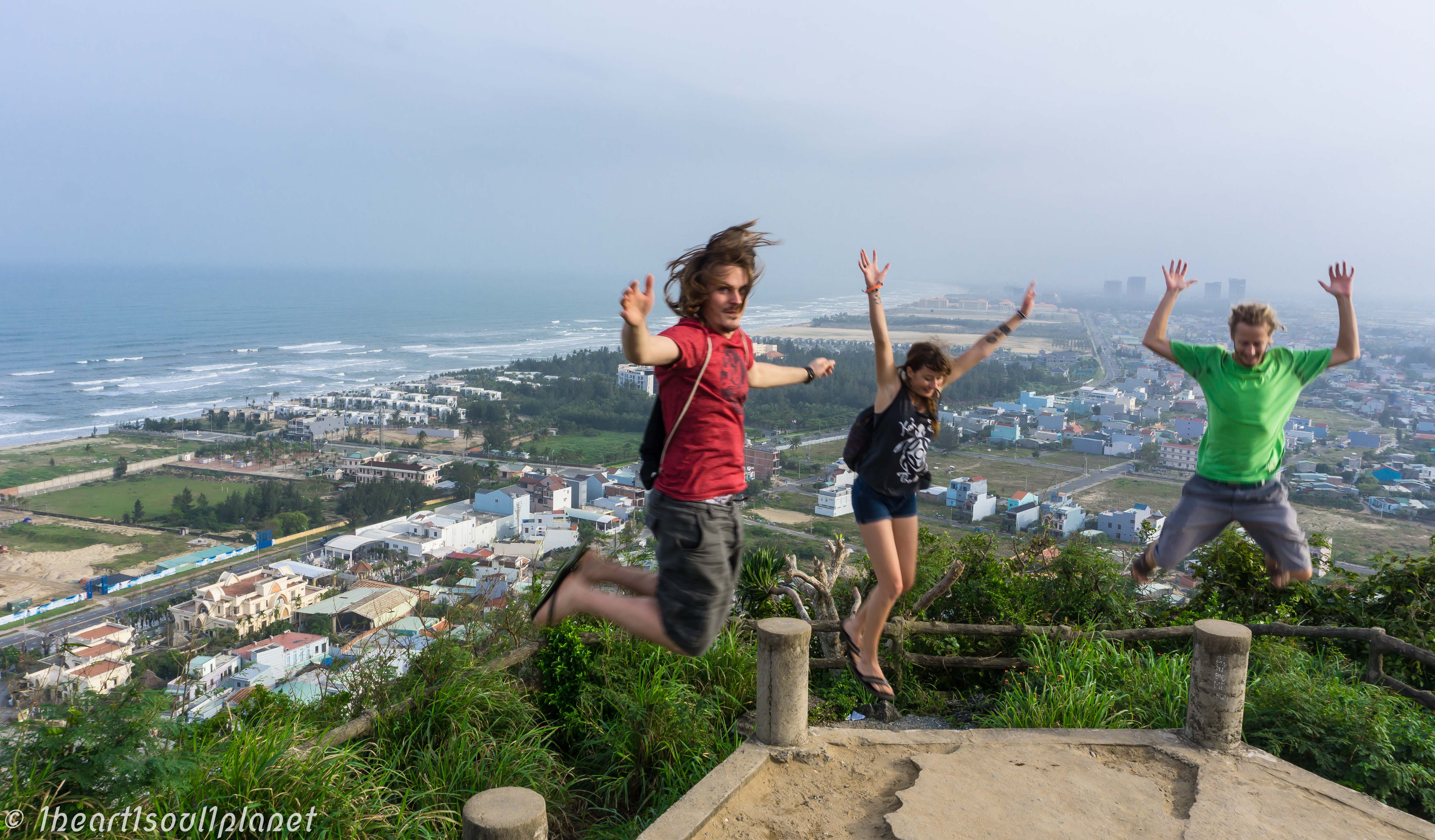 Chris got his first tattoo on our last day in Hôi An and it took quite long, so there wasn’t much time for anything else.

A taxi brought us to the airport in Danang the next morning, where we boarded a plane to Kuala Lumpur and then Bali…