Some people collect stamps… and we do, too!
We collect country stamps though and so it seemed only logical that we would not just look at Dubai from the airport window, but actually stay there and get our passports stamped.

When you think about it- it really doesn’t make sense to just skip countries even though your plane lands there… at least if you got enough time to explore.

Dubai turned out to be worth the effort of leaving the airport!

Though… leaving the airport took a bit longer than expected, because other than in Africa, the people here believe the same stereotypes as the people in Europe, and so when they saw René’s dreadlocks, they immediately directed us to the security counter and had someone search his bag.
How we know that?
Well, the security guy pointed at Nici’s bag first to be searched, but when he saw who it belongs to, his finger wandered over to René’s bag. That’s quite obvious.
Anyway, the woman who searched the bag was very friendly and also funny, she didn’t seem to actually be looking for anything illegal, she merely took out everything she found interesting- including two big African masks we had got from Irene- and held them up to her colleagues and they all started laughing.
We chatted a bit with her and were quite entertained ourselves, especially when she tried to open one of our hard discs… probably thinking it was some kind of box.
She also found our African dresses to be “way too thick to wear in Dubai”, but Nici proved her wrong later…

The taxi driver who brought us to the hotel was also a woman and she too was very friendly and wanted to know where we came from etc.
We arrived at the wrong hotel though, because there’s two with the same name (it’s the same chain) and in our booking confirmation, they had given us the wrong address.
The staff of the Panorama Hotel was very helpful and they called a driver who brought us to the Panorama Grand Hotel for free.

When we arrived in our room, it was already 2am and the room was a fridge…
People in the desert love their aircons.
We turned it off, of course, but the damage was already done and we shivered quite a bit while falling asleep.

Breakfast was supposed to be included, so we set the alarm for 9am.
When we arrived in the hotel restaurant, however, they were cleaning up and told us that breakfast time was over.
We said: “But breakfast’s supposed to be until 10 and it’s only 9.35!?”
The waiter just smiled and said: “Not here in Dubai”
Nici then checked her phone and really, it was 10.35…
René had set the time on his phone as soon as we had arrived at the hotel, but apparently, it had decided to switch back to Nairobi-time without our knowledge.

Shit happens, but we filled our empty stomachs with delicious Thai-food at the Dubai mall instead… no regrets! :-)
Though it was rather expensive, prices are about the same as in Switzerland. 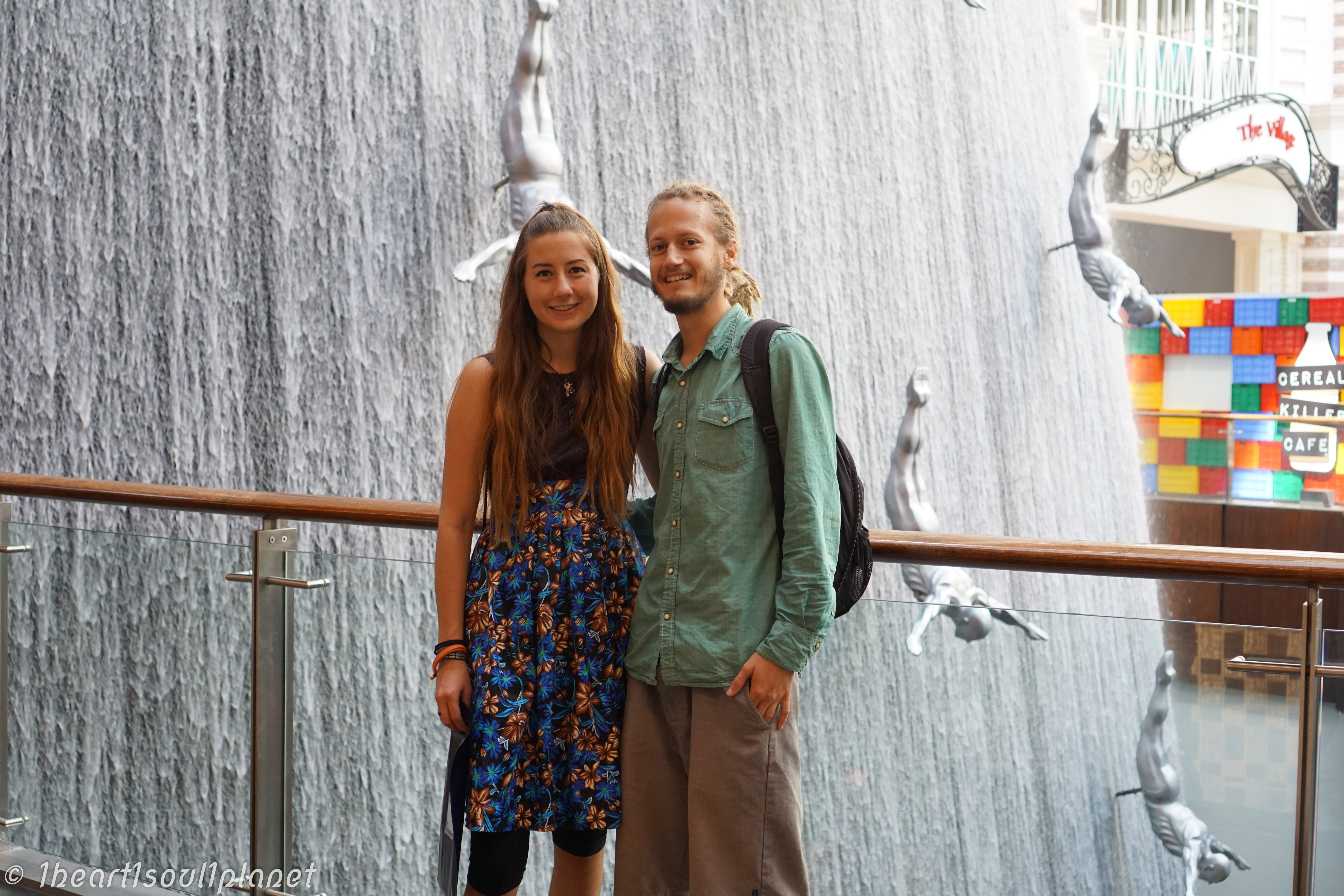 We then bought tickets for the sightseeing bus, because the lady who sold them offered us a 2-day ride plus a night-tour for the price of a 1-day ticket. The cost was still way higher than it had been in Johannesburg and Cape Town, but we didn’t want to refuse the good deal and bought the tickets anyway.
It was definitely the best way for us to go around and see things, since we only had two days in Dubai.

Even though we don’t really like big cities, it was a relief to be in a clean place where everything works and people drive the way they are supposed to.
Compared to Africa and India, Dubai was clearly the other extreme- but also a nice break in between.

The weather was also very nice- hot, of course. We needed it after travelling Kenya and Uganda during the rainy season.

The sightseeing ticket included a boat cruise as well and after that, there was no time to grab dinner before the night-tour started. 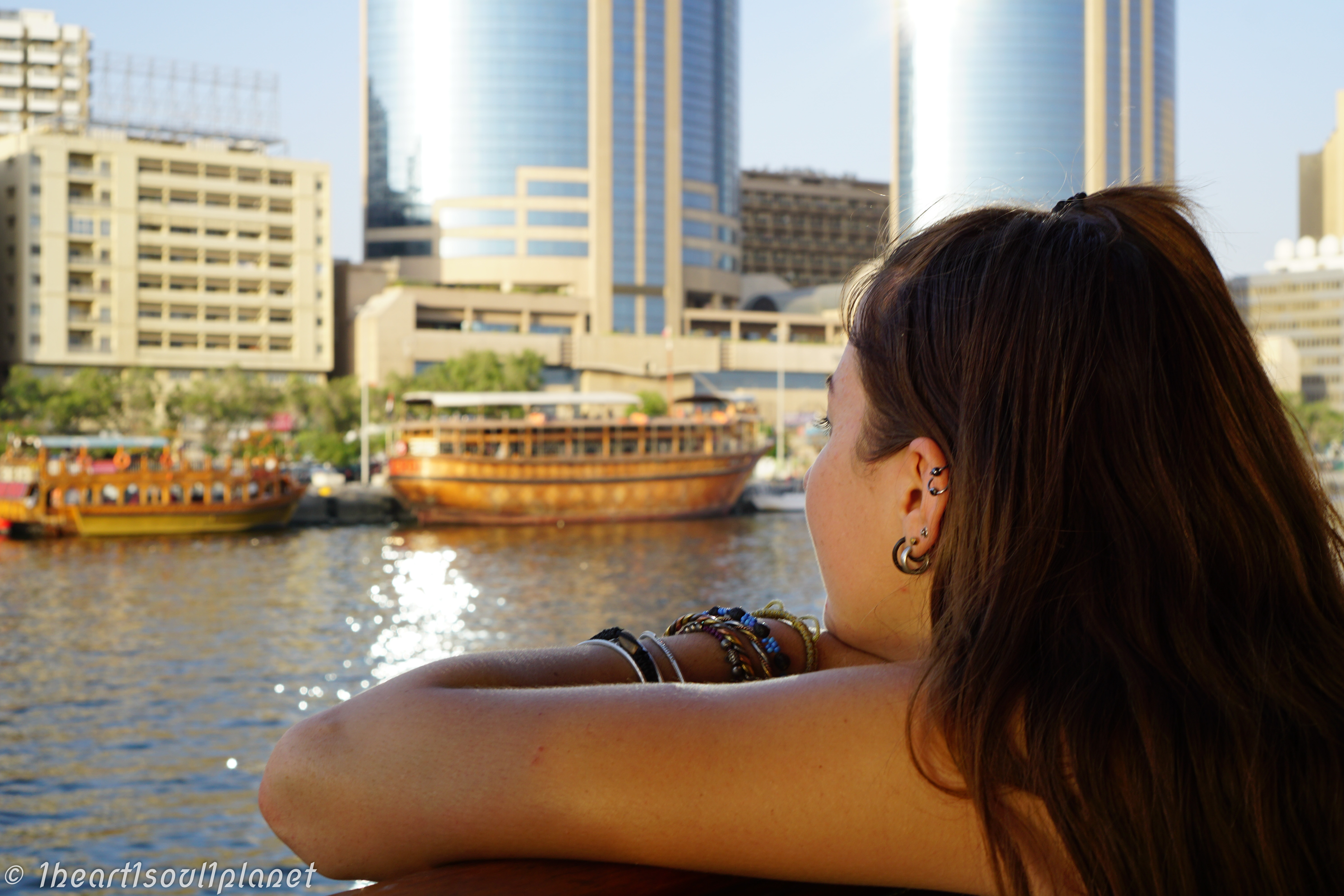 Dubai by night is beautiful! The buildings glow in all colors and give the whole city a magical touch.

Also magical was the water-show near the Burj Khalifa. We enjoyed watching it before finally looking for a place to eat. We chose Lebanese food and it was delicious! 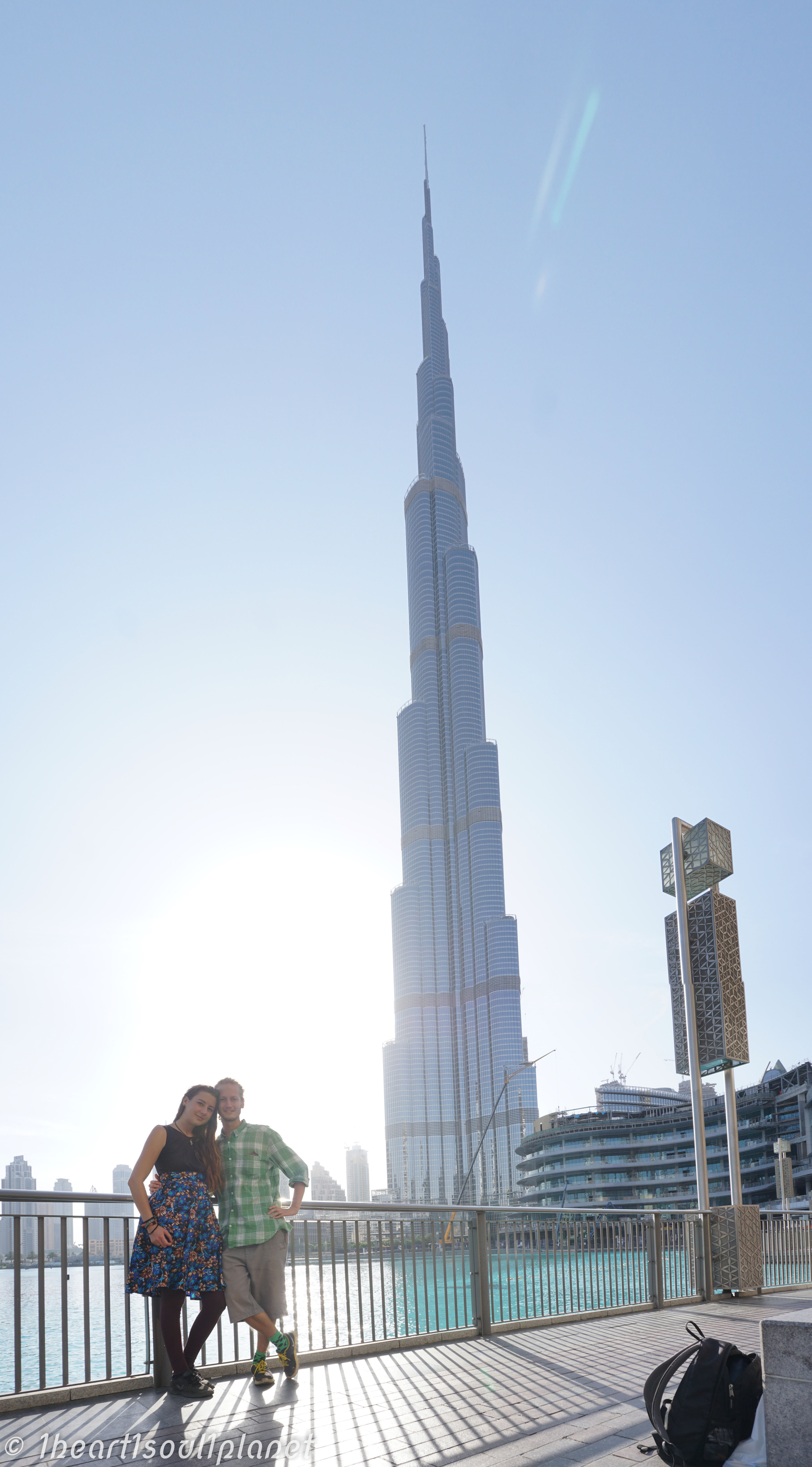 When we arrived back at the hotel at around midnight, we were annoyed to find that the staff had turned the aircon back on and it was set on 10 degrees! Who does that? Most people don’t find 10 degrees a comfortable temperature, so why cool a house down like that?
Again, we turned it off and opened the windows to let the heat back in, but what really bothered us was, that they had wasted so much energy during our absence.

Then we took the metro back to Dubai mall (there’s wagons only for women and children, by the way) and hopped back on the sightseeing bus.
This time, we were driven to the palm and it was nice, though honestly not so impressive when you’re on it. To really grasp the size of it, you’d have to see it from afar…
we didn’t want to pay for a helicopter flight though.

After the tour, we went to Dubai Garden Glow- definitely a place we would recommend!
There we found tasty falafels and waited for the sun to go down and the lights to be turned on.

Once they had, it was incredibly romantic, but we had to hurry up because our plane to India was going to leave a couple of hours later. 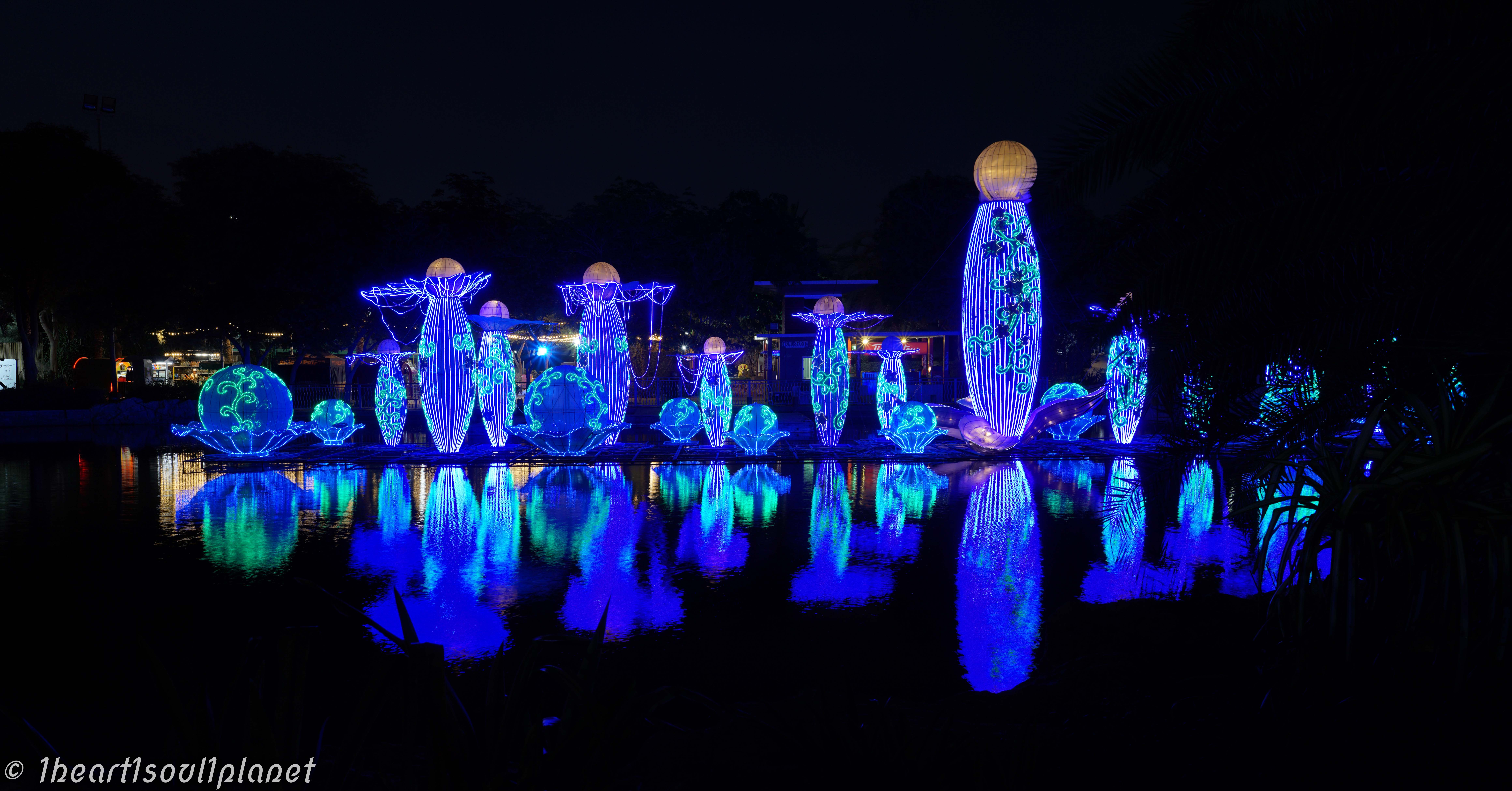 We still managed to take some nice pictures though and the taxi driver who then drove us to the airport was very nice and told us a lot about India. 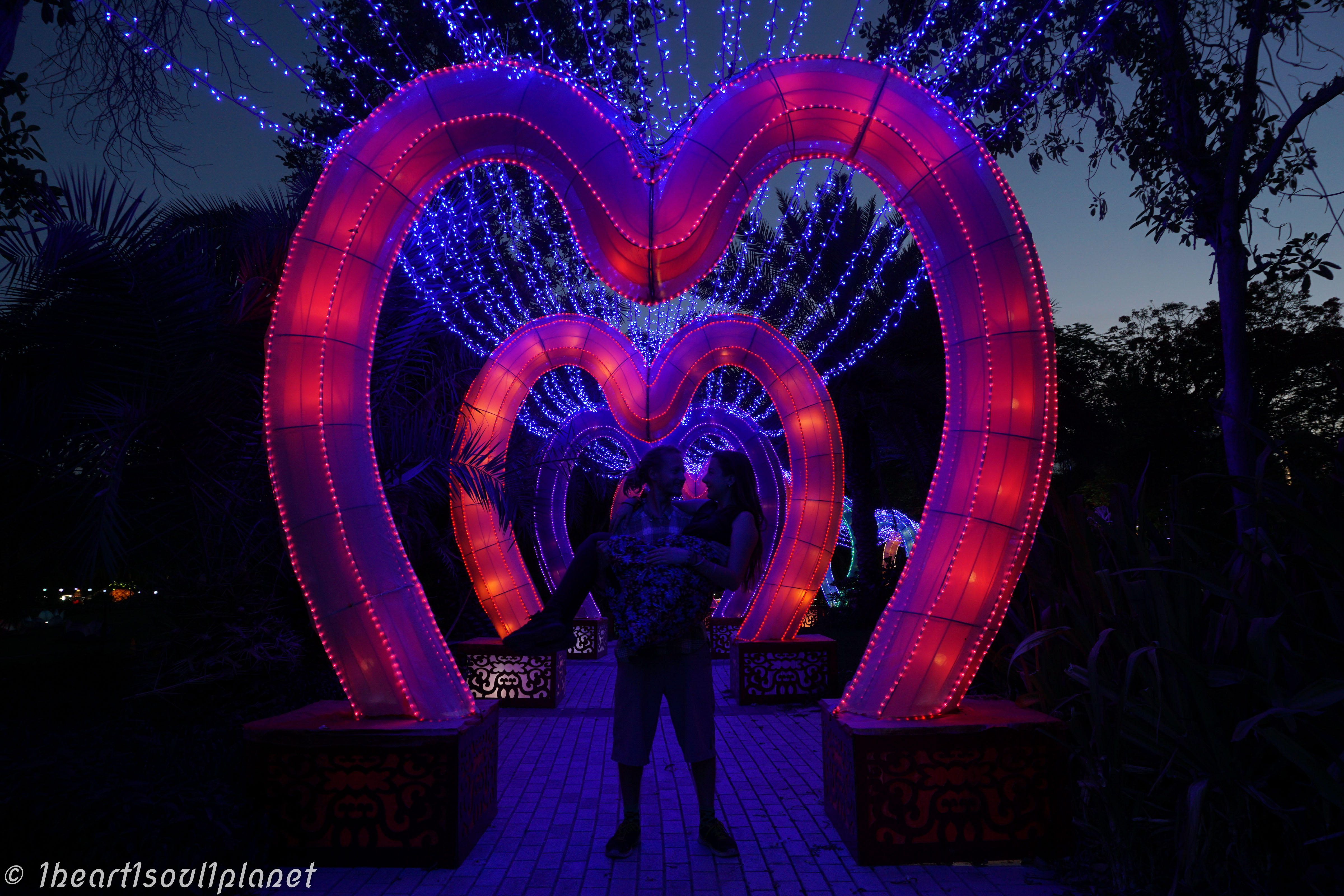 All in all we’re extremely glad to have planned those two days in Dubai! It’s absolutely worth visiting and it let us enjoy some luxuries before flying to Mumbai :)