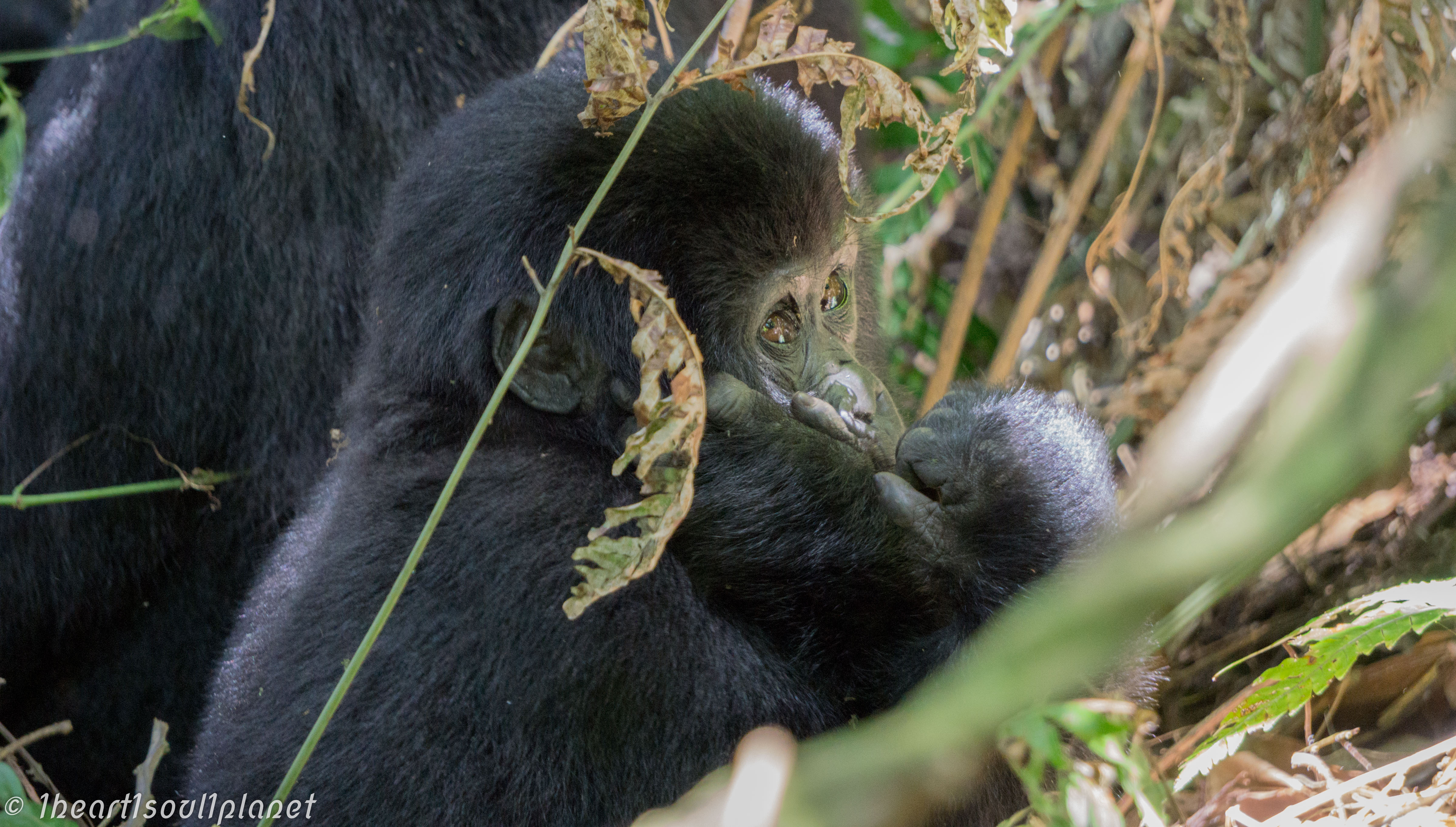 After reading very bad reviews about the Simba Coach Company, we decided to book our tickets for Kampala at the Modern Coast office.
That was a good decision!
The bus was on time and we had our reserved seats with USB-plugs and there were even more seats than passengers.
We had chosen a night bus to not waste any time and it got quite cold in certain parts of Kenya, before we reached Kampala at approximately 10 o’clock in the morning.
Our first impression of the city was a good one, there were big and modern looking buildings and despite being a capitol city, Kampala was much calmer than Nairobi. However, we had to bargain a lot until a taxi driver gave us a price with which we were able to live. Since Uganda is one of the top tourist destinations at the moment, the locals are used to foreigners paying more than what’s normal.

We were driven to the Backpacker’s Hostel, which we had chosen because it has its own booking office for gorilla-tracking.
We then booked one night in a dorm to save money, but that seemed quite pointless after booking a gorilla-package at the booking office. We had known that gorilla-tracking is very expensive and something that you normally do once in a lifetime, but we ended up paying almost twice as much as we had anticipated.
Even with rainy-season discount, whatsoever.
Our package included being driven from Kampala to the Bwindi Impenetrable National park by a personal driver, two nights in the park and all meals and drinks.
It would have been possible to take local transportation and go to the park by ourselves, but since we only had one week in Uganda and also Nici was tired of travelling, that would have been a bit daring and we chose the easier but more expensive way.

Khalif, our driver, picked us up at 8 o’clock the next morning (after a free breakfast in the hostel) and told us Uganda’s history while driving through the country for 11 hours.
We enjoyed the ride very much, because Khalif had even brought pillows and we were able to lean back, listen to music and watch animals in one of the game reserves we drove through.
We also stopped at the equator to take some pictures. 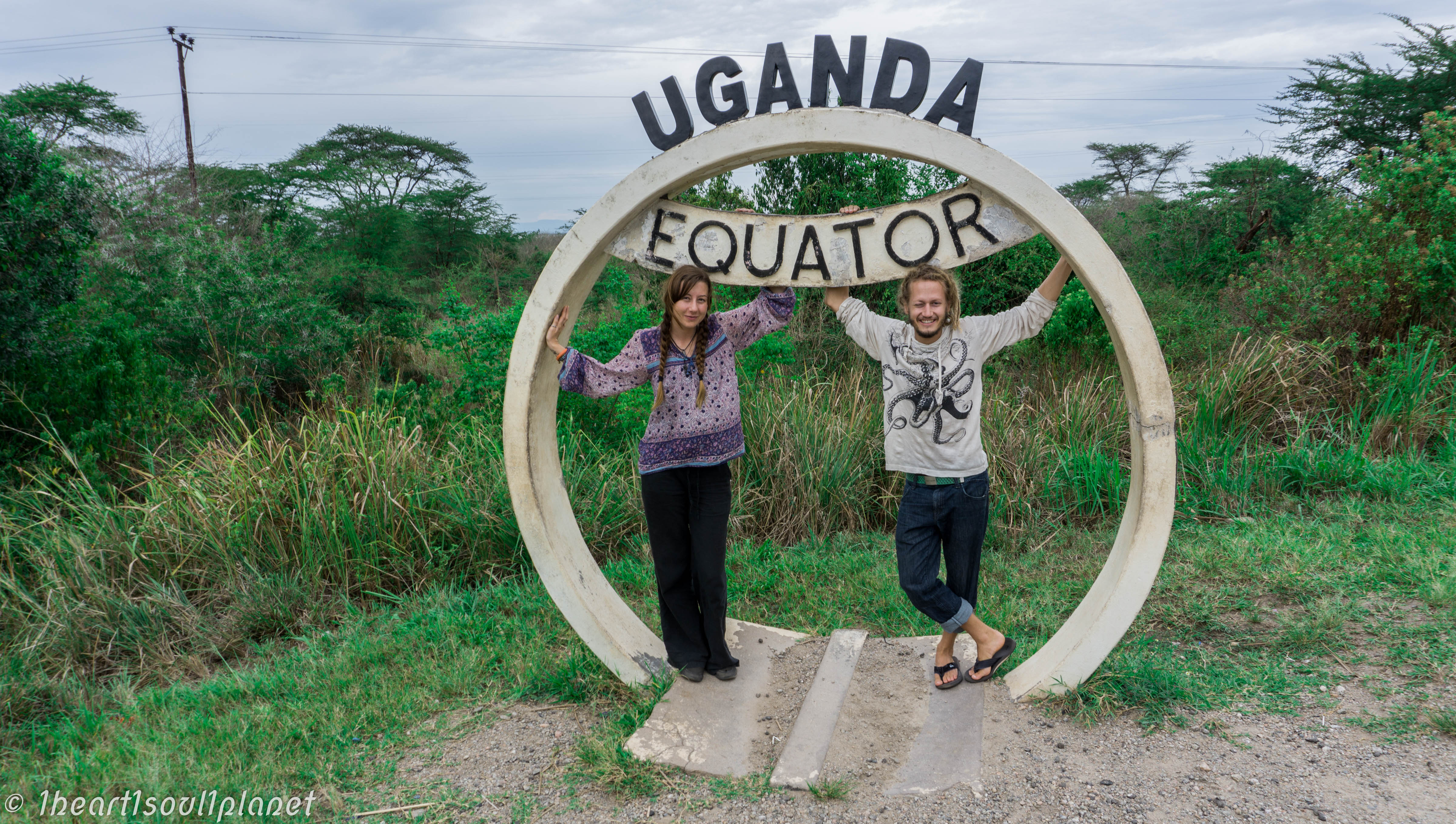 Barbara from the booking office had booked the package for us as cheap as possible, so we were supposed to sleep in a dorm.
To our surprise, we were led to a beautiful double-room with its own bathroom and afterwards, we were served a vegan three-course meal and the lodge even had wifi…
Well, at least we now knew where our money had gone and we were able to enjoy the unexpected luxuries ;-)

The program started at 7am the next day and after a delicious breakfast, we went to the ranger’s station to watch a short documentary about gorillas and were then given a briefing about the tracking.
Thanks to low season, there weren’t too many guests around and our group only consisted of four people, instead of eight.
We were chosen to visit the Mubare gorilla family and the rangers told us that the chance of seeing the gorillas is 99%, because every day, a group of rangers goes ahead and tracks the gorillas through the jungle, and then calls the other rangers to tell them where the apes are, so the tourists can simply be led there.
However, the hike is unpredictable and can range from 30 minutes up to 6 hours.

The Mubare family apparently did not want to be visited and gave us quite a hard time.
When we started the hike, the group of rangers who had gone ahead had not yet found them.
We hiked up beautiful hills and enjoyed the marvelous view over Uganda’s landscape, with its vast forests and banana trees.

Along the way, we met many locals who greeted us friendly.
It was a sunny day and pretty soon, we were soaked in sweat and even entering the thick jungle didn’t bring much relief.
The hike went on and on and the ground got steeper and steeper.
We felt the hope of finding the gorillas grow smaller with every hill we went up, just to find that the apes were not on its top.
We had both already been on jungle-trekking in Asia, but never before were we on such a hard hike.
The rangers were out of breath themselves and told us that they had never before had such troubles finding the gorillas and they were extremely glad that our group only consisted of young and more or less fit people.
When we left the path to enter the untouched jungle, we both ripped our pants and scratched our arms, climbing over bushes and ducking underneath branches, while the rangers cut our way through the trees with machetes.
But hey, we’re not complaining!
It was extremely interesting to discover what we are capable of and it felt as if we were in a movie, fighting to survive in the wild.

After about six hours, the rangers who had gone before us finally called and said they’d found the gorillas!
It took us another 30 minutes to reach them, but when we saw their black fur shimmering in the bushed, all exhaustion seemed to vanish and made room for excitement! 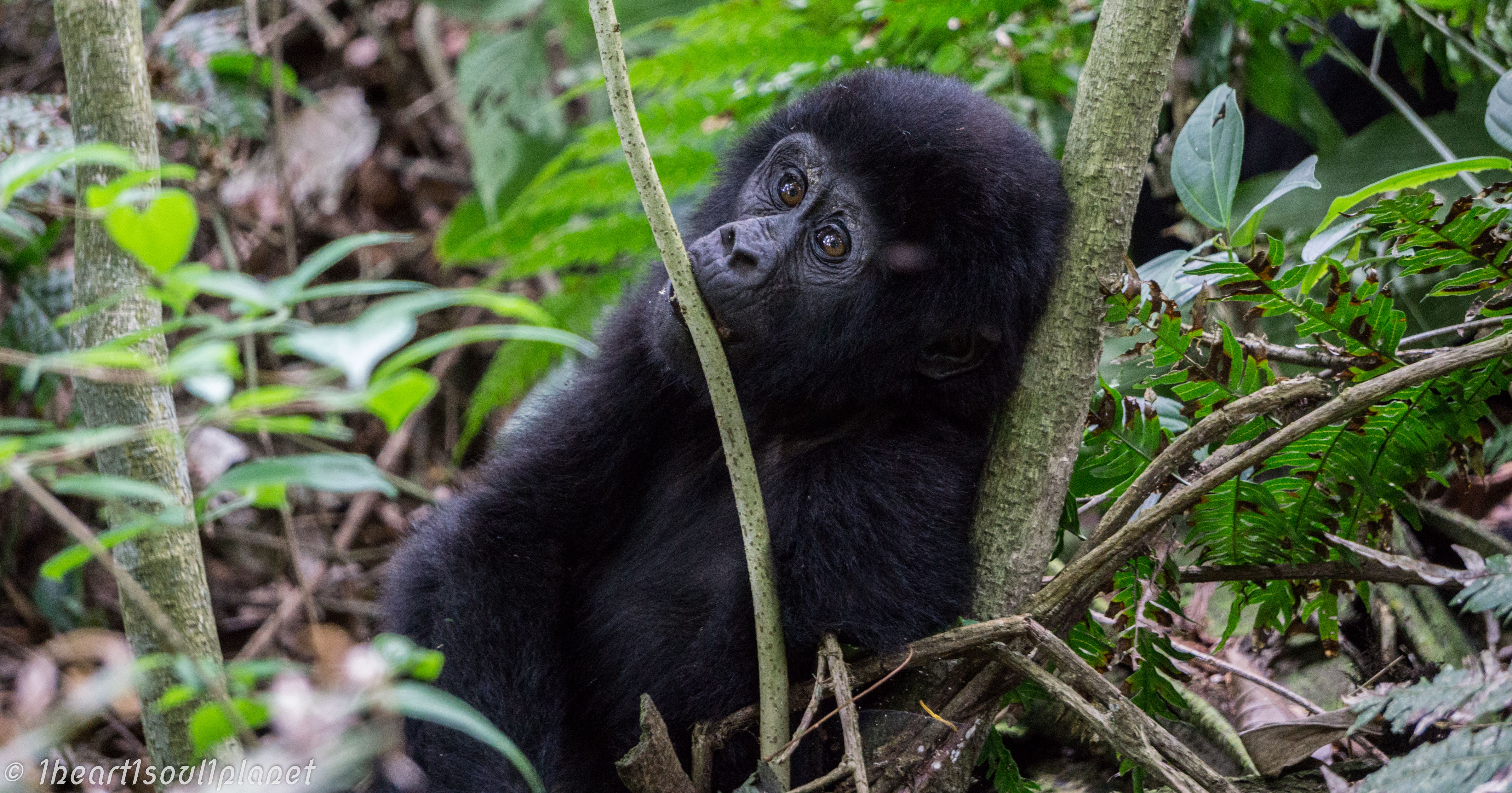 We were surprised at how close we were allowed to go to the gorillas, but apparently, they are used to humans and really, they almost completely ignored us, while we took pictures and filmed from a very short distance.
The silverback was different, though. He always turned his back towards us and when we got too close, he walked away. Or maybe he just wanted to show us his beautiful shiny back?
The women were quite photogenic and remained close to us, but the star of the show was one of the babies!
He showed us his climbing skills and played on one of the trees by swinging from a branch and spinning himself around.
When his mother suddenly left her place and walked towards us, our hearts stopped for a second, but she just walked through our group to climb up a tree and she didn’t seem to care that her baby was still on the other side of us- even though it is said that you should never get in between a gorilla mother and her baby. 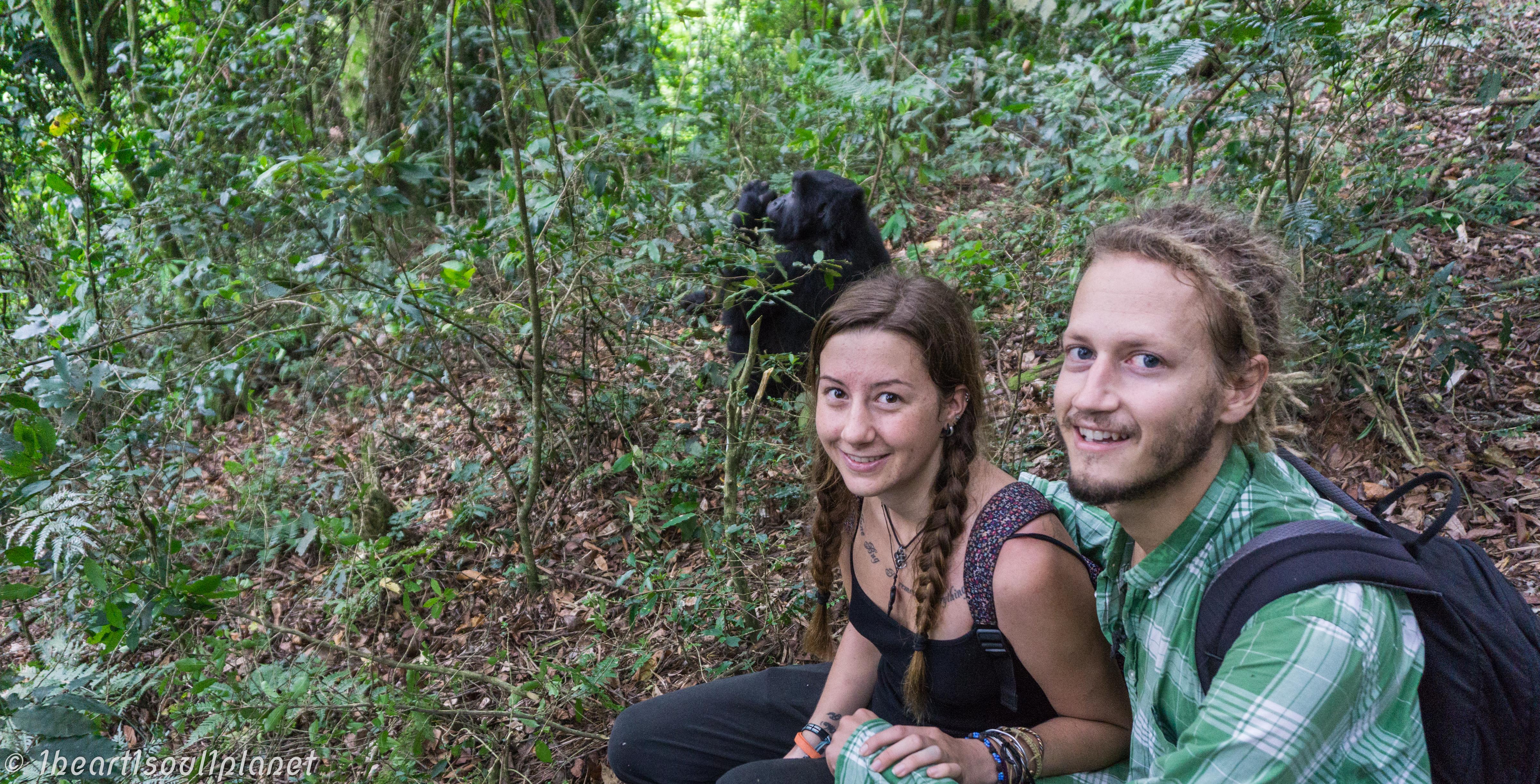 Another adrenalin-increasing moment happened at the end of our hour with the gorillas.
We were supposed to leave them, but we requested another few minutes to maybe be able to take some better shots of the silverback.
The rangers led us towards him and even though the silverback growled warningly, they went closer, knowing that it wasn’t dangerous.
The silverback, however, suddenly charged and despite knowing that you should never run from a gorilla- we all ran.
It just happens automatically when a gorilla charges you, trust us.
The rangers screamed “don’t run” and we all stopped and the silverback stopped as well and continued eating, as if nothing had happened.
The rangers found it funny and we too started laughing after our heartbeat had returned to normal.
The guides then explained that sometimes the gorillas charge to warn the people, if they’re too close, but they never actually attack- as long as you don’t push the situation further.

The hour that we were allowed to spend with the gorillas was over way too soon, but we were satisfied and happy.

It took us another two hours to walk back to the camp and we were so exhausted, our legs were burning and we felt dizzy.

A shower and an hour of lying down helped, though and afterwards, we were ready to go souvenir-shopping in the village nearby.

The children of a local boarding school showed us their dancing skills and kept us entertained, before we were once more spoilt with a delicious three-course meal. 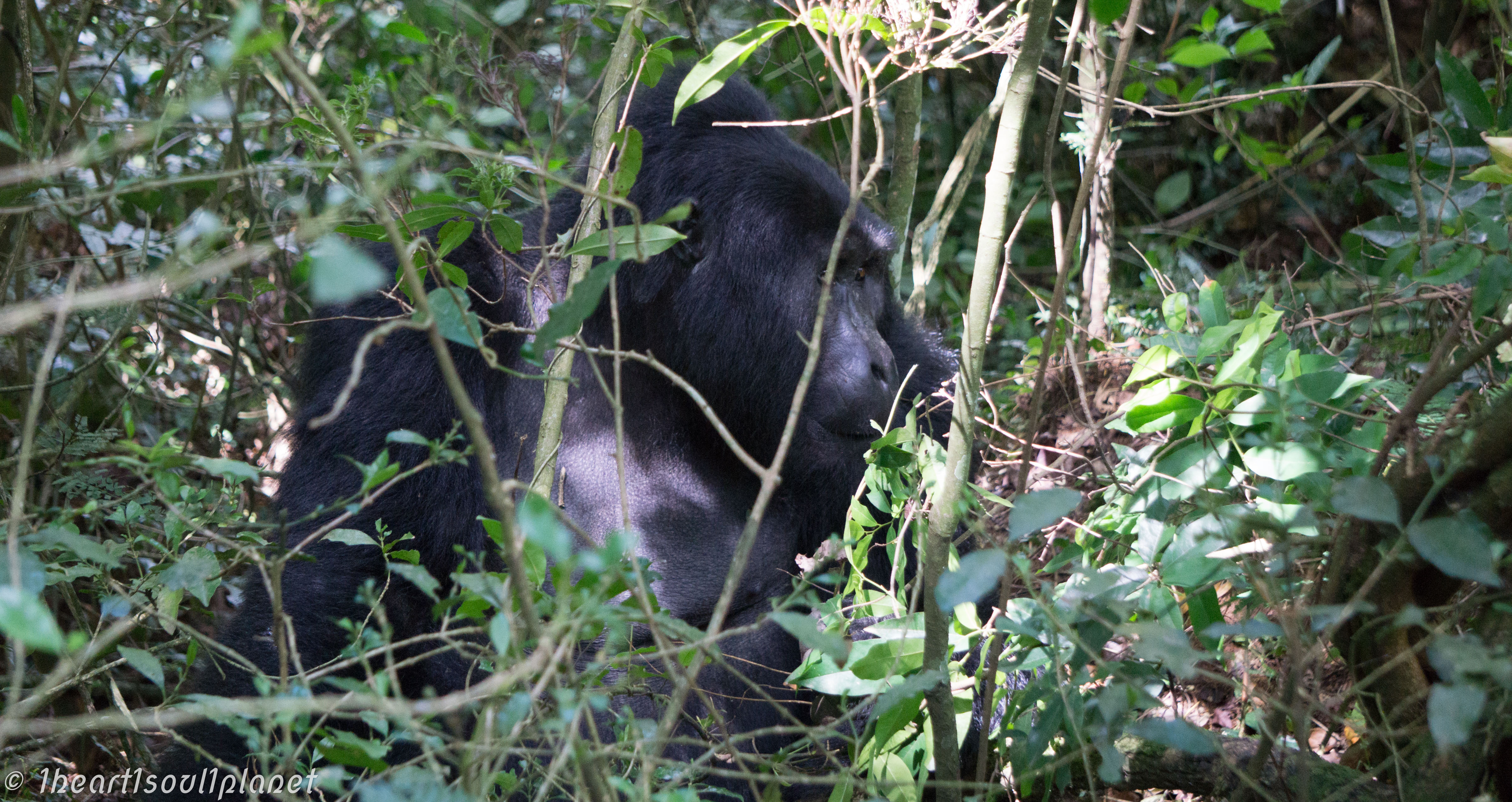 The next day after breakfast, Khalif drove us back to the Backpackers Hostel in Kampala- another eleven hour drive.
On the way, however, we enjoyed lunch in a restaurant that had a buffet, of which approximately 90% was vegan :-)

René was very eager to spend our last three days in Uganda exploring the country further, but Nici had some kind of travel-burnout and just wanted to lie in bed with the blanket pulled over her head.
René wasn’t happy about that, but seeing that travelling with Nici when she’s in a bad mood isn’t fun, he decided to stay in Kampala.
We enjoyed another shopping-tour in the city and bought many beautiful fabrics and dresses.
The Backpackers Hostel has its own pizzeria, so we enjoyed cheese-free pizza for dinner.

The Modern Coast night bus then brought us back to Nairobi, but this time, it was an older vehicle and the window wouldn’t close, so we spent quite some hours shivering while driving through the colder parts of Kenya.

Irene and her family welcomed us back warmly after we arrived, and we enjoyed once more their generous hostility and the soft bed and… Netflix ^^

On the day before our departure from Africa, we went to the city of Nairobi for a last time and enjoyed the view from the conference center tower- something most tourists do in Nairobi.

And then the day came and we said our tearful goodbyes to Irene, Grace and Natasha, before an UBER (with a very nice driver) brought us to the airport. To our surprise, our Kenyan Airways plane was very new and luxurious- something we hadn’t expected after spending more than a month in Kenya.

Since we had unknowingly booked the seats situated right over the wing, we weren’t able to see Africa grow smaller underneath us, but we thought back to the 5,5 months of travelling through this incredibly beautiful continent and despite looking forward to a change and especially to India, we felt sad.

We don’t even know how to express our feelings for Africa… you hear so many bad things about this continent in Europe and it’s such a shame. We already knew that most of the stories are exaggerated, but we never expected travelling Africa to be so easy and fulfilling!
There’s so much to see and the locals were always welcoming and extremely friendly and helpful, it made us feel at home right away.

We can only recommend you to visit this beautiful place yourself, because trying to truly describe our experience would fill books and we don’t have time for that ;-) 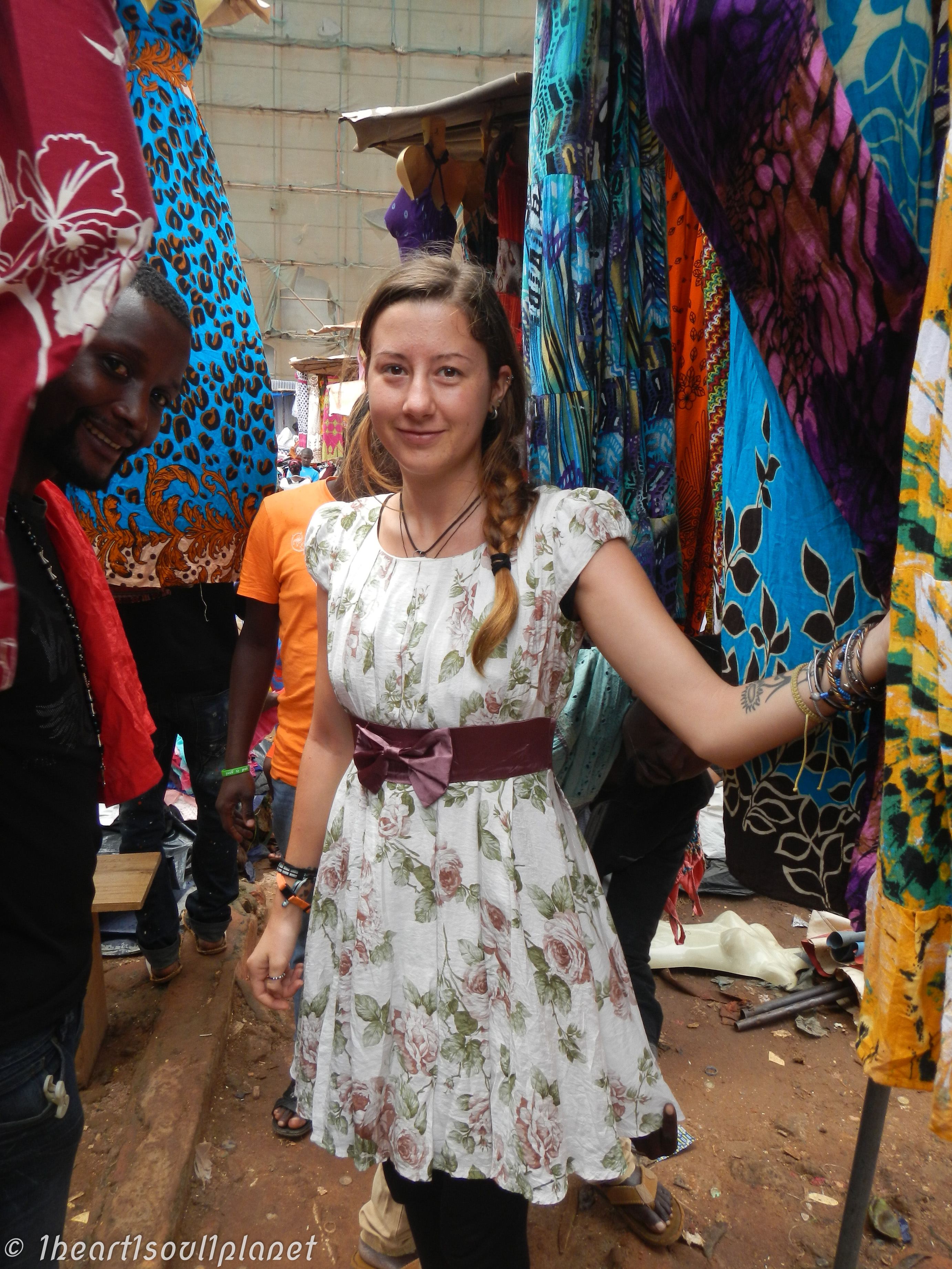 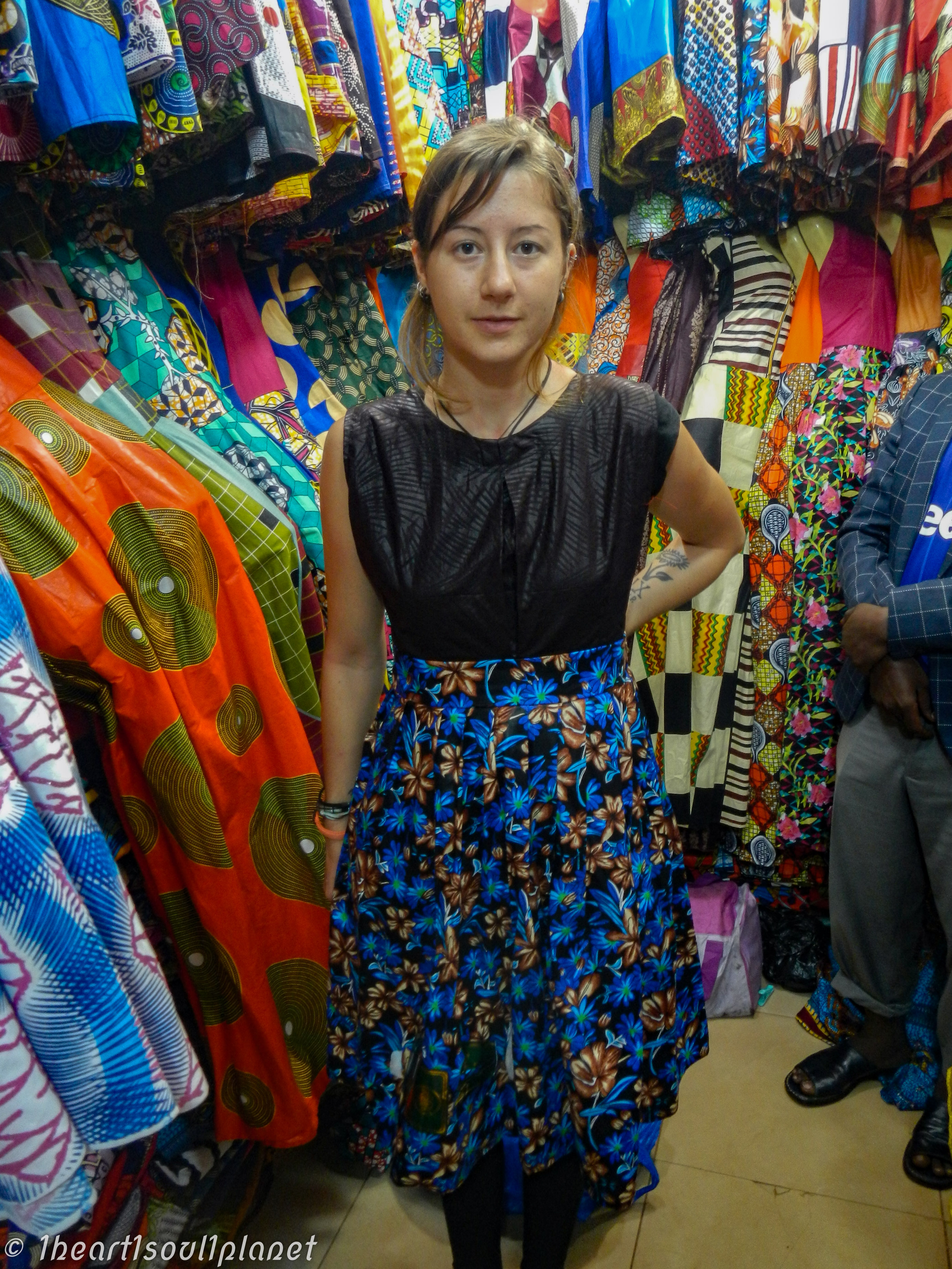