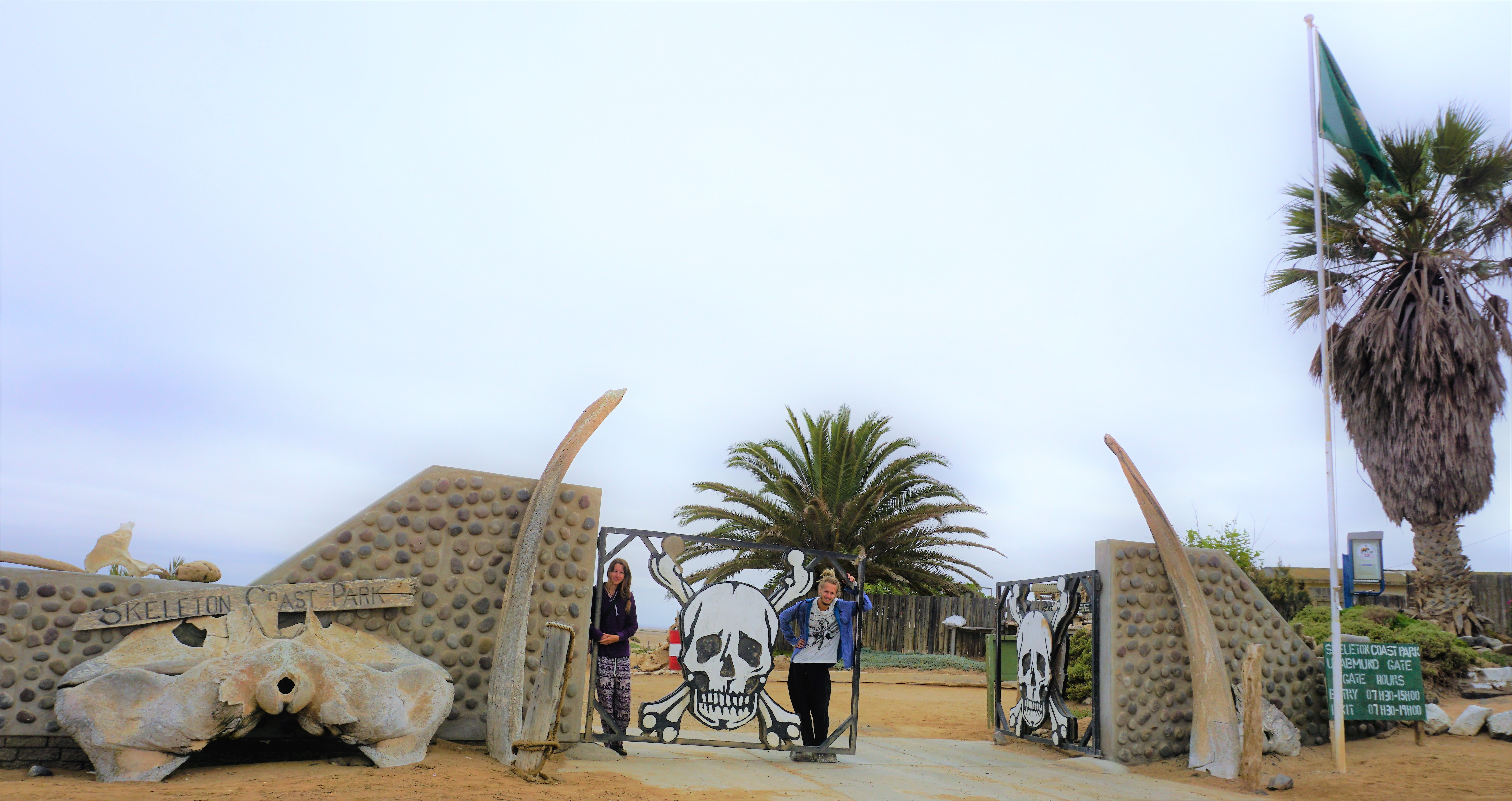 We arrived at the Namibian border in the middle of the night and had to fill out our entry forms. They weren’t happy that we hadn’t filled in an address- but we had nothing booked, so we didn’t know what to write.
They let us pass anyway, but in the future, we will just make up some address to make things easier.

Our arrival time was 7am in Windhoek. We were supposed to pick up our new rental car at 12, but when we showed up in the office 4 hours too early, they gave us the car anyway.
This time we had decided to rent a Toyota Hilux. The prices in Namibia are generally higher than in South Africa and we were prepared to pay more for a car. Another Hyundai i10 would’ve cost us more for two weeks than what we had paid in South Africa for one month. The difference between the Hyundai and the Toyota however, was only 600 N$ (Namibian Dollars have the same value as South African Rand), so we chose the Toyota. We thought it would get us better through the deserts of Namibia… well…

The first campsite that we found on iOverlander, was the Elisenheim Camping. The owners are german and we were greeted in German, which was a bit surprising after weeks of speaking only English. The woman who greeted us was really nice. She told us that they were actually still closed, but that we could use the camping and the facilities anyway. We decided to book two nights there, since we still had a lot to organize and we needed some time to settle and let our minds arrive in Namibia.

Since we need a visa to go to India in April, we had to go to the embassy of India in Windhoek. It was Friday and therefore our last chance before the embassy would close for the weekend. So we changed our clothes and made ourselves presentable, after a long night in the InterCape bus. That effort was wasted though. At the embassy, they told us that we had to apply online and then print the form and bring it to the embassy. We don’t have a printer though and we never stay longer than a few days in one place, so the whole process seems to be a bit complicated.
The best thing to do is probably to wait until we’re volunteering in Botswana, because we’re going to be in one place for several weeks then and we’re not going to need our passports while working.

The next day, the owners of the campsite had a birthday party and it made us feel like we were on Mallorca, because of all the german hits they played ;P

Our friend Sara, who we had met in Swaziland one month ago, contacted us and told us that she was in Windhoek at the same time :) So we met up with her and decided spontaneously to join her on her trip to Swakopmund. Well, actually we drove and she enjoyed the luxury of our quality camping mattress in the back of our car ;)
Sleeping in our car was really comfortable this time!

Swakopmund is a beautiful town in the desert, next to the ocean.
We didn’t have time to go swimming, but we took some nice pictures of the colorfully painted playground and benches near the beach.

Before driving up the Skeleton Coast, we drove south to the Walvis Bay, where we visited the flamingos and the unexpected group of pelicans…
Then we continued up north and enjoyed the peaceful and quiet desert. It was a great feeling to drive several hours without seeing another person or a house!
To our left was the Skeleton Coast- which got its name because it’s a huge area that spreads over millions of hectares and there’s only sand, stones and bones. To our right was the seemingly endless desert.
Earlier in time, many people crashed ashore with their ships and the instant they looked around, they knew they were doomed.
Today however, there are a few towns and many people drive along the Skeleton Coast to go fishing, so we encountered other cars once in a while.

That was a good thing actually, but we only realized that after crashing our car in a dune and waiting for help in the middle of the desert.

We enjoyed the absolute emptiness of the desert and encountered some seals on a beach where we had stopped to look at a shipwreck. Then the road got worse and we actually found it weird that the speed limit was 100 km/h. We only drove 80 but even that was too fast when we hit a sandy spot on the left side of the “road” and the tires slipped, which made the car fishtail and we lost control about it. We thought it would just stop at some point but then the car rolled off the road and into the sand… and then we rolled over several times.
It’s exactly the way they picture it in the movies- it feels like everything happens in slow motion. Luckily, our car was like a cat and landed “back on its feet”.
Our cozy “bedroom” got completely destroyed, but hey, the cheap mattress survived and even some of our beer cans are still whole… Actually most of our luggage is still intact, including the laptop and cameras.
We are fine apart from a few bruises and a sunburn because we had to wait in the desert for hours until we got picked up. We were lucky though, because only a couple of minutes after our accident, there were already several cars driving by and their drivers went to get help, since there was no cell phone reception.

When the ambulance arrived, we got quickly checked for injuries and then the chief of ambulance and his wife waited with us for the towing truck. The day was not as hot as a day in the desert could be, the sky was cloudy and it was windy. “It’s a good day to have a bad day”- that’s what the chief of ambulance said to us. He was right.
He and his wife then drove us back to their home and invited us to stay until everything was sorted out.
We stayed for three nights until our new car got delivered by the rental company.
It felt weird. For us, the accident was a disturbing experience and we feel bad about having broken the car. It felt like time had stopped somehow, but the rental company just sent us a new car from Windhoek and our rental agreement continues normally.

Apparently, accidents like ours happen about once a month in this area and the chief of ambulance told us that we are not the first travelers he had invited to his house and that we most certainly won’t be the last…

Thanks to Brian and Emily for letting us stay in their house and to the Lifelink-team for helping us to sort out everything on the phone and with the police! :-)

Turns out, what we told our families and friends before leaving, is true: The most dangerous part of our journey is that we spend so much time on the road… 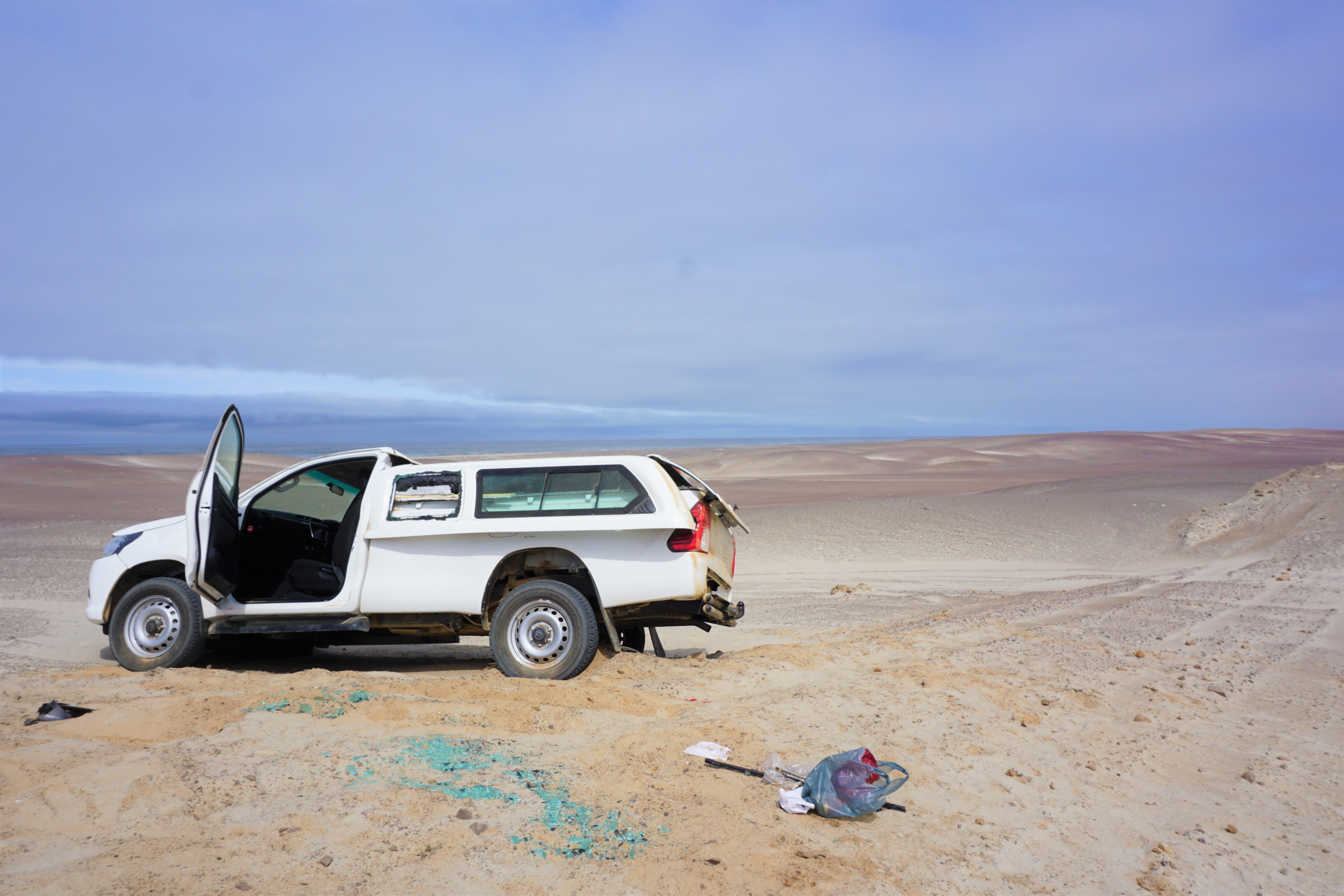