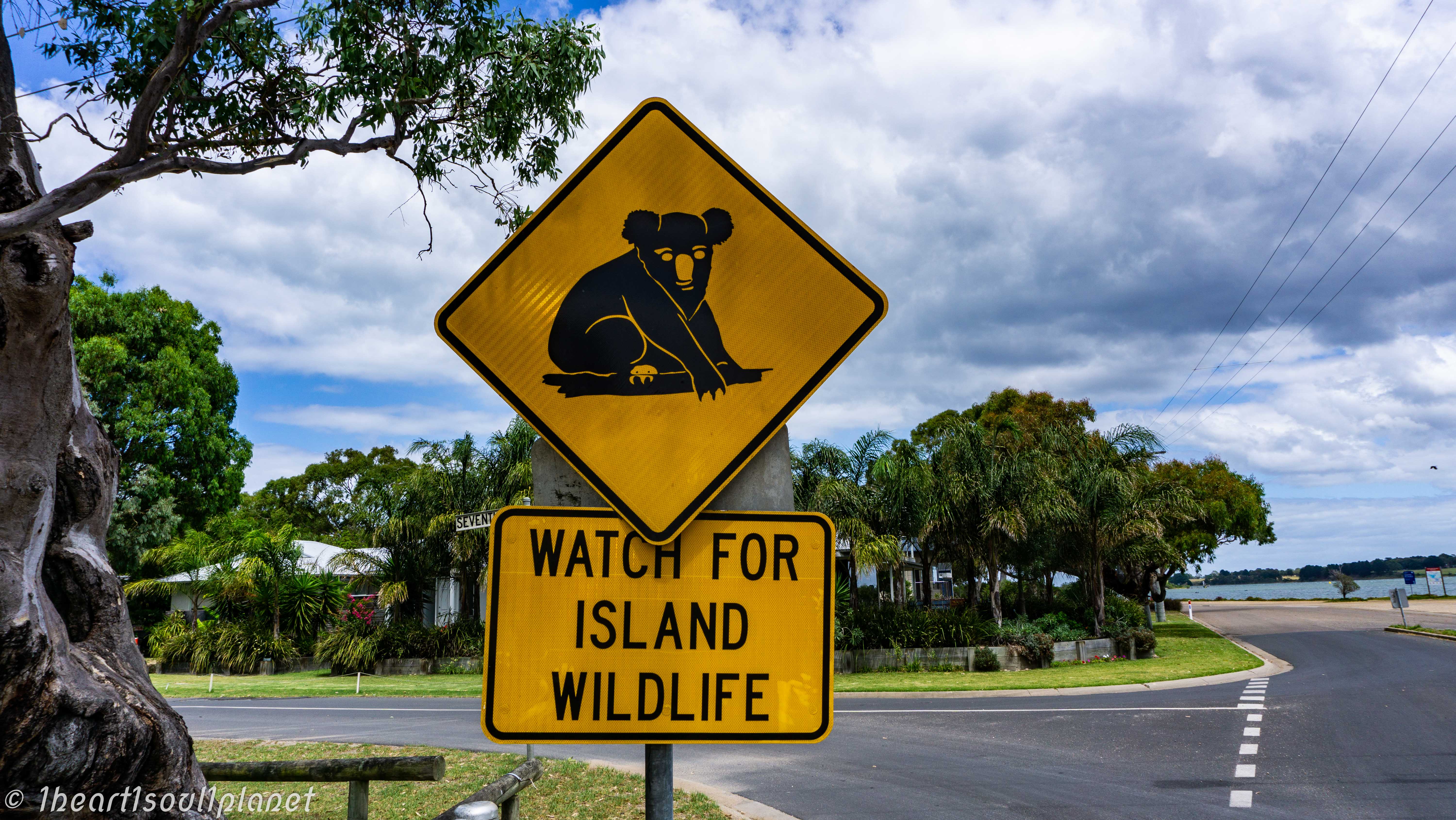 
Our heart rate had gone back to normal, once we reached another nature reserve. There weren’t many other guests on the campsite, but two dogs wanted to play fetch with us, so that’s how we passed our time.
We also met a nice couple who gave us recommendations as to where to go next. 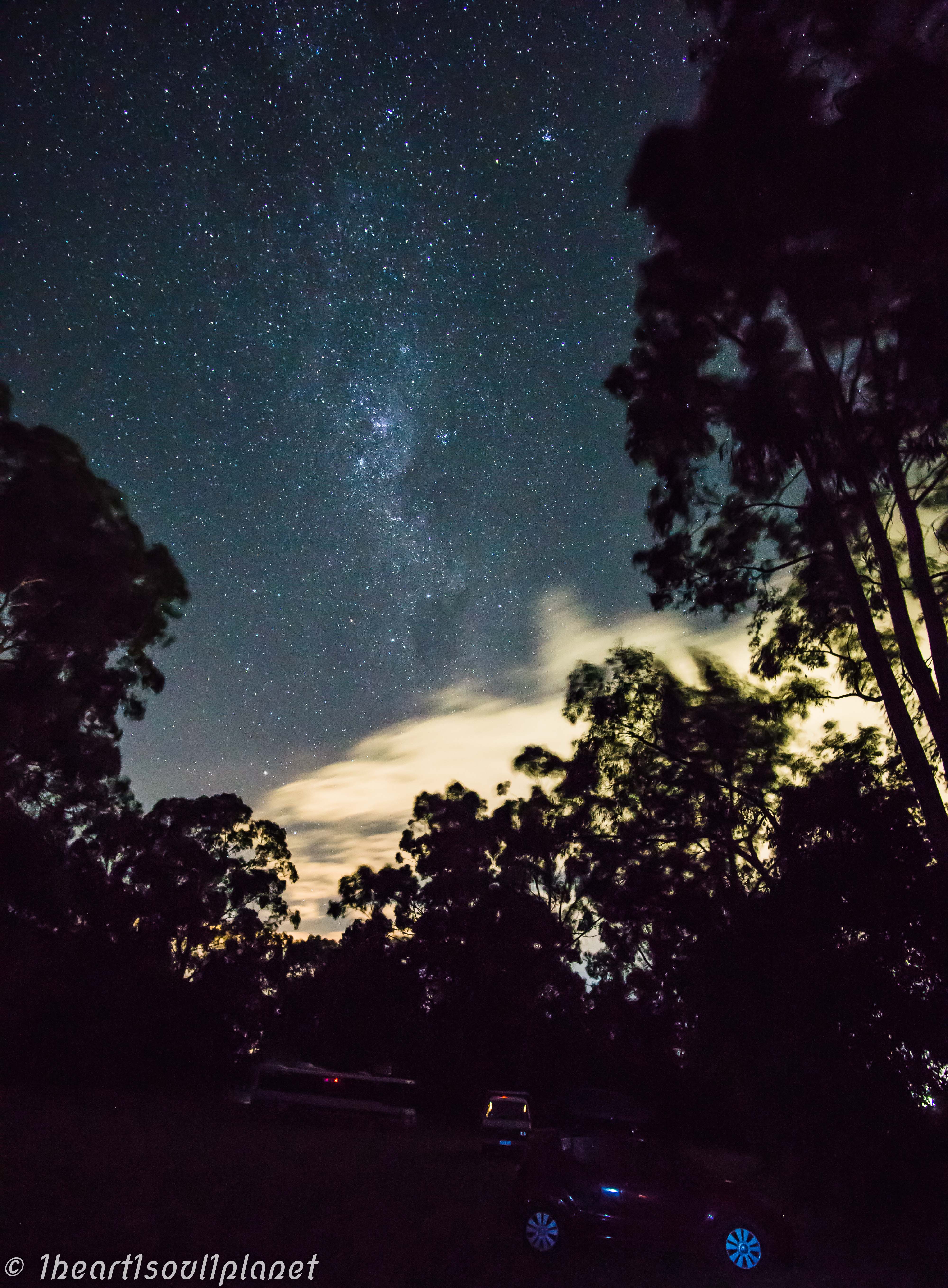 We definitely wanted to see more Koalas and what better place to see them than on Raymond Island?
Wickie, our car, stayed in a big free parking lot, while we took the free ferry over to the island.

There, we wanted to do the Koala trail, but before we could even get started, something else caught our attention:
An echidna!

Of course, we had no idea what it was called, since we’d never seen anything like it before. It didn’t seem to be disturbed by our excitement and waited patiently until we were done taking pictures.

Next, we saw Koalas. This time, they were a bit lower in the trees, which made it easier for us to observe them. 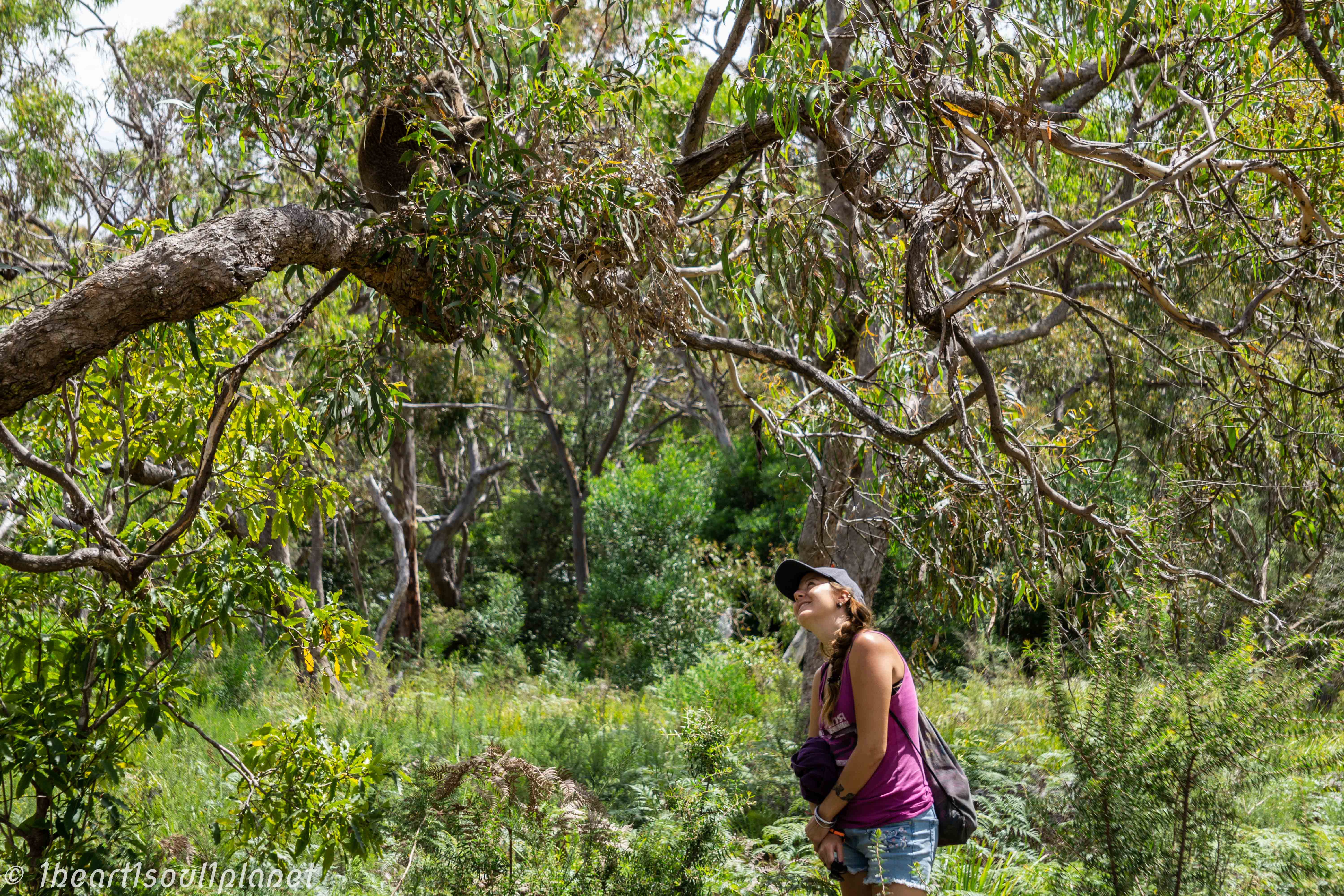 We then spotted something, that looked like a moving branch of the tree.
Turned out, it was an owl. That fella sure knew how to make himself invisible! 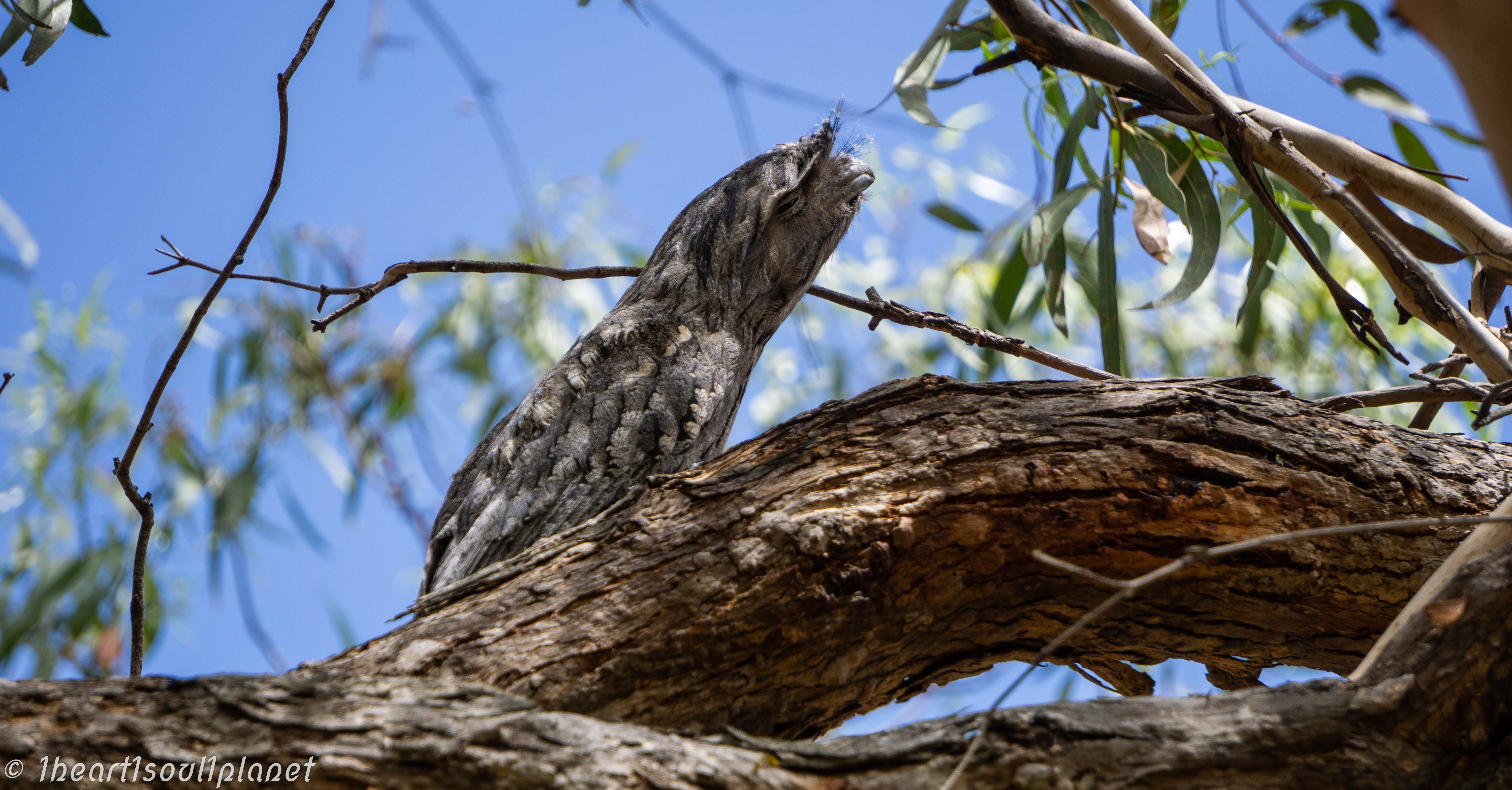 At the end of the walk, we even encountered a Koala on the ground. They’re faster than you’d expect.

Another rather touristic place made it impossible for us to find a free campsite. We absolutely needed a shower though, so we gladly paid 25 dollars for one night. 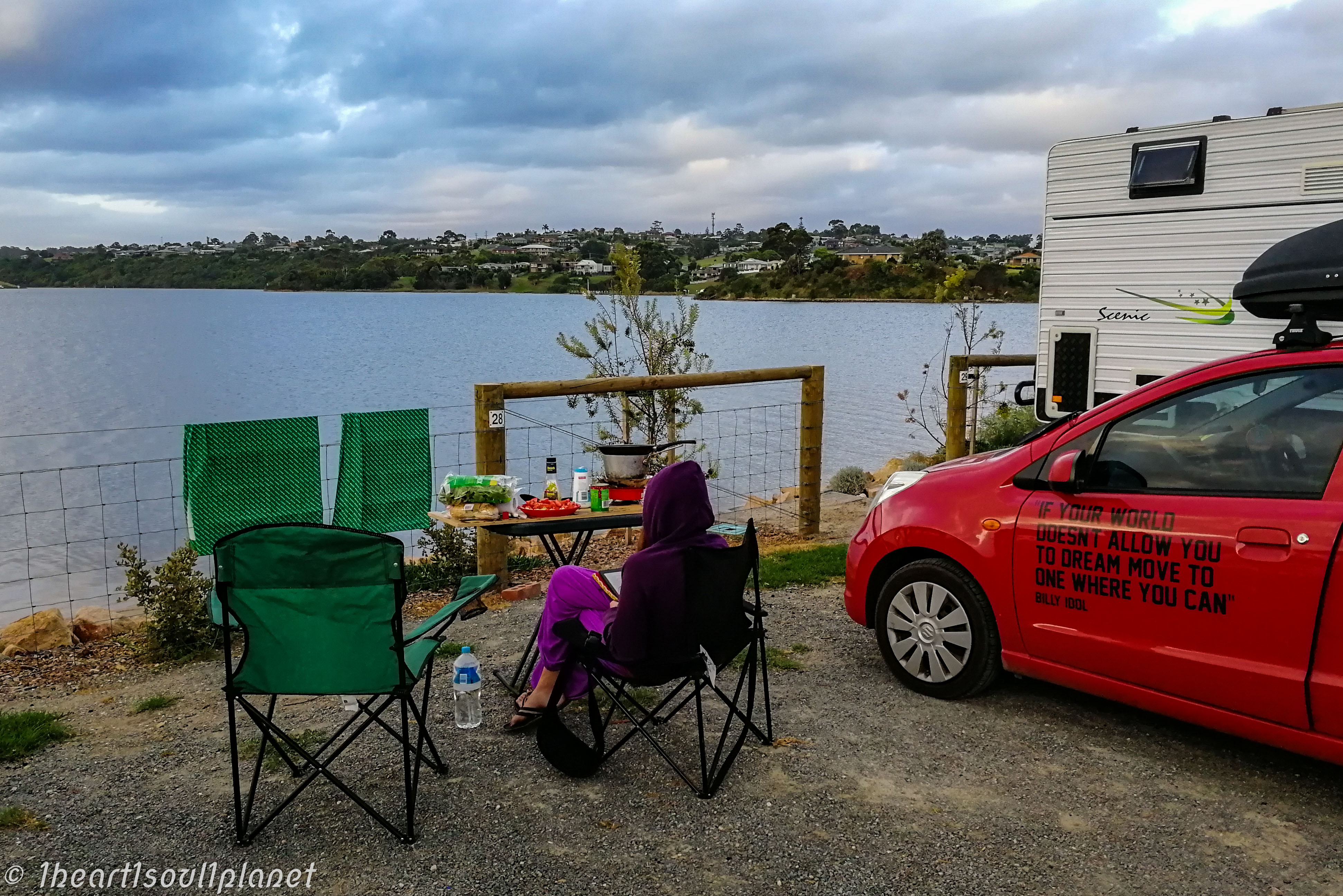 The campsite was crammed, but we got a nice spot right next to the lake, where we watched black swans with babies, while preparing dinner.

As soon as the sun began to set, it got cold though. Really cold.

Big field, big trees and bathrooms with running water. We decided to stay more than one night. You were supposed to pay here, but all they wanted was a donation to keep it running.

Nearby was a hiking trail that leads to Genoa Peak. We challenged our Wickie up the rocky road, scratching it in the process, but it managed all right and just as we drove onto the parking lot, we spotted a huge goanna.

He looked at us lazily and then he walked towards the hiking trail and disappeared in the bushes.

The path was quite nice. It led through the forest and up to the peak, where the wind would have blown us off the mountain, if it hadn’t been for the balustrade.
The view was awesome. 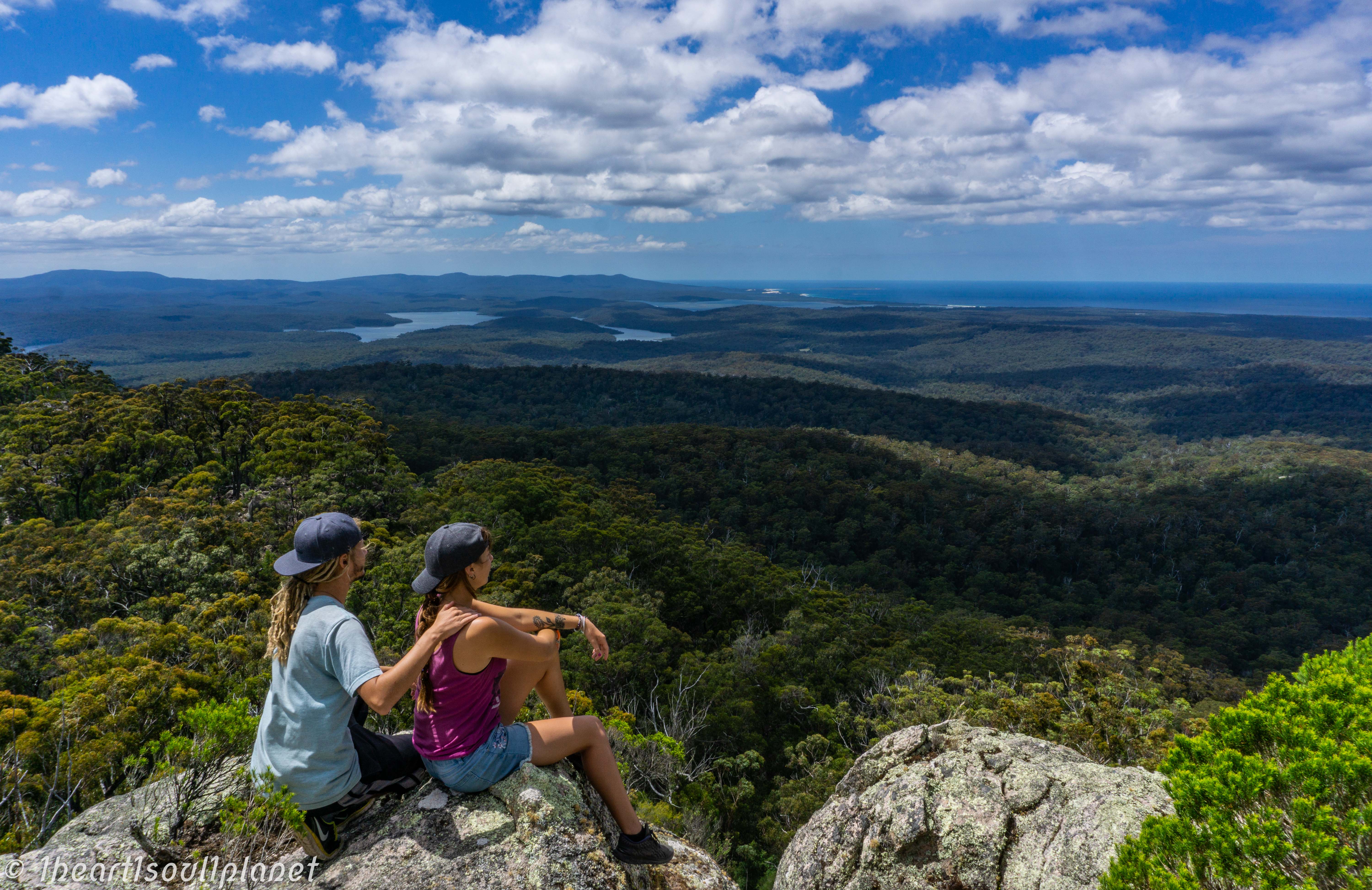 A beautiful free campsite surrounded by forests and grass land. The best is: we were the only guests.
First thing we did was take a long walk, hoping to encounter wombats.

We saw kangaroos and wallabies instead and even a cute little snake, who was so scared when she saw us, that she literally jumped backwards out of the grass, making Nici jump as well.

The night was very windy and we feared for one of the many dead trees to fall down on our car. There were even signs warning about falling trees. 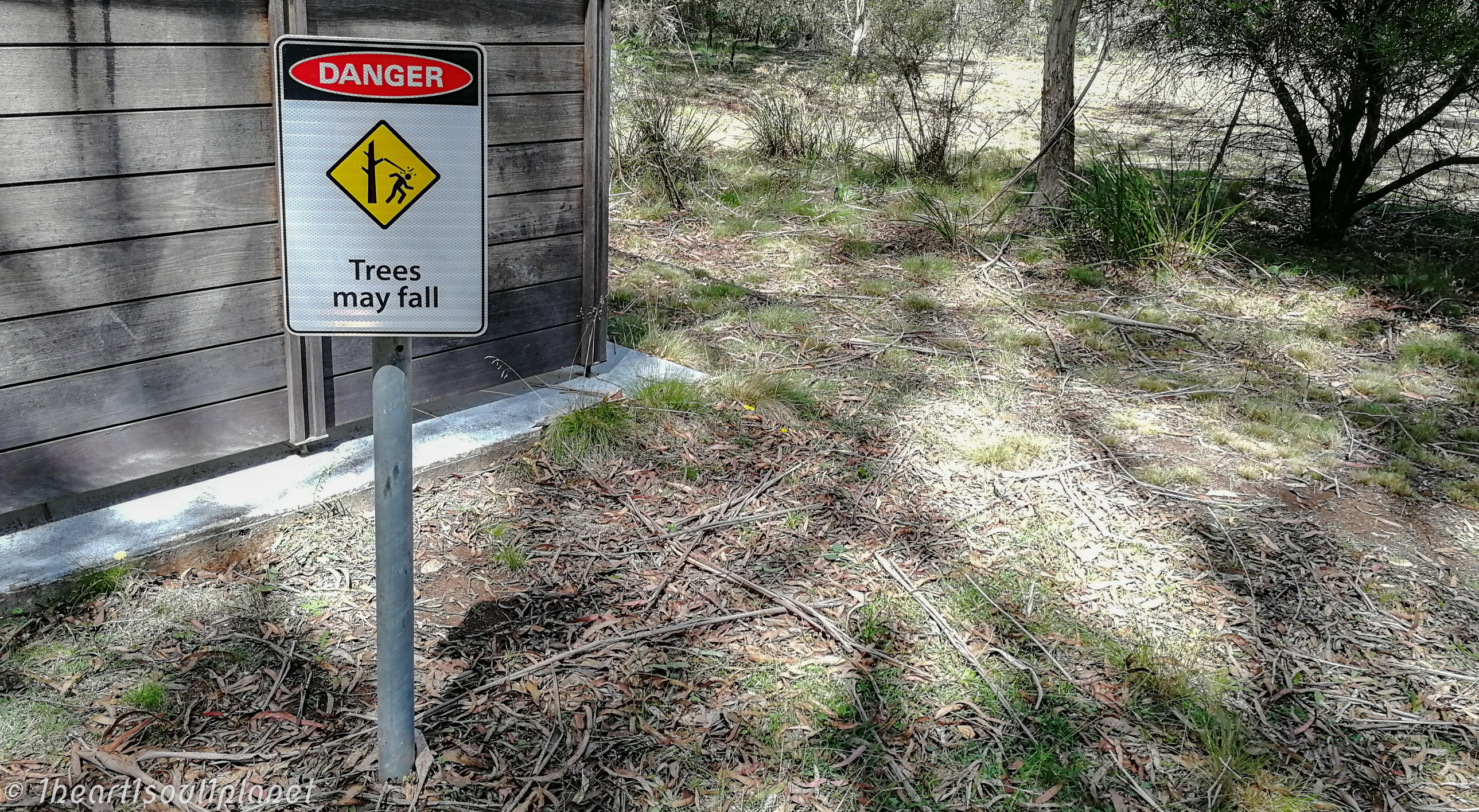 No tree hit us, luckily, but the night was really cold and we shivered in our cheap K-mart sleeping bags.

Before we reached the campsite, we went to a dive school to ask about scuba diving.
The dive school didn’t look very inviting, since it was also a shop for fishing supplies.
The dives turned out to be way too expensive for us anyway, so we decided not to book anything.
Our disappointment vanished, as soon as we reached the campground.
Again, it was surrounded by trees, but it was also right next to a lake AND the sea!

We caught the last sunrays on the beach, but the waves were too big to go swimming.

On our way back to Wickie, we encountered a couple of kangaroos. Then we saw another goanna chilling in the soft leaves on the ground. 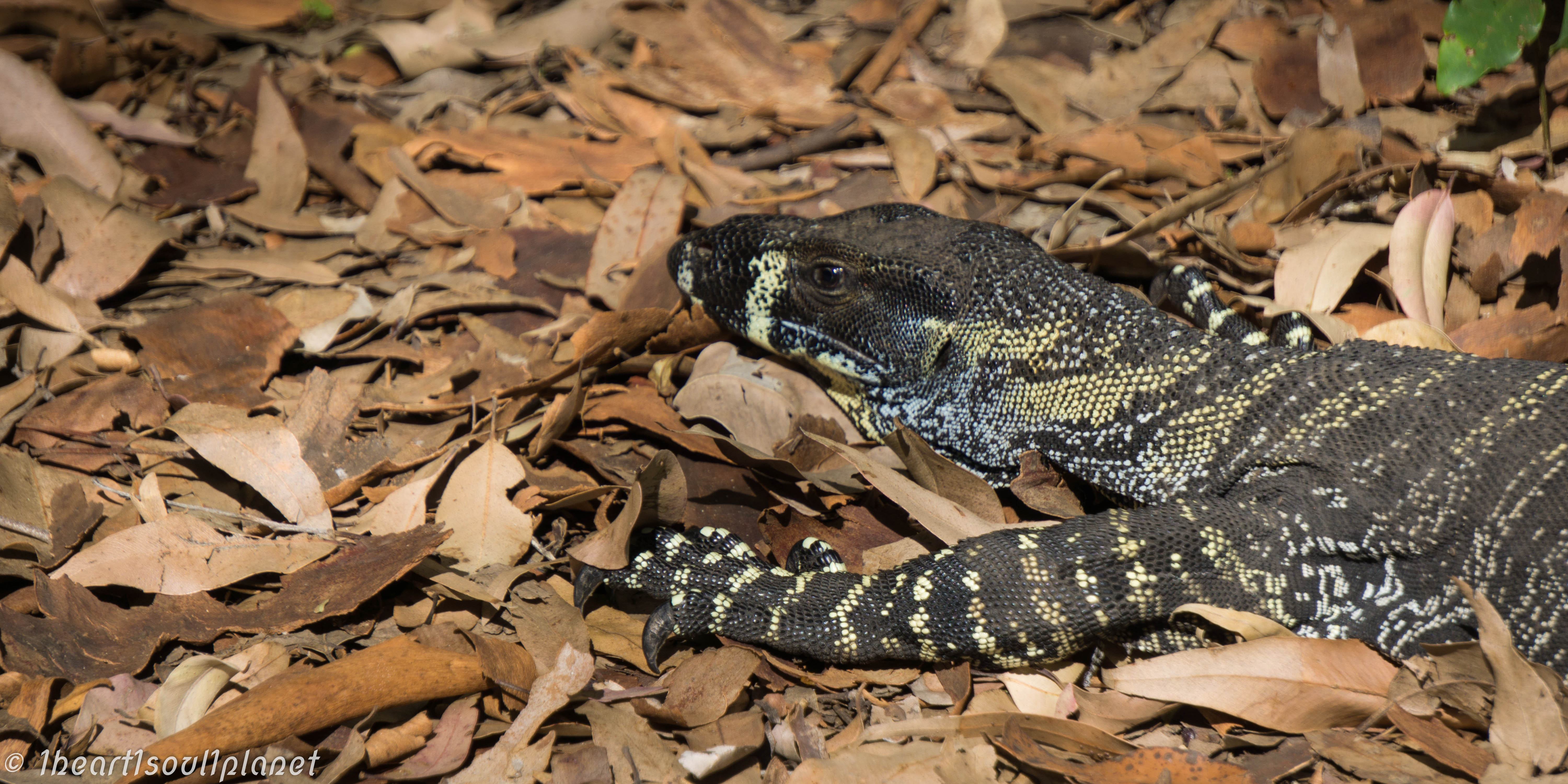 Later that evening, a huge possum visited us to explore our trash bag.

Now we were soo close to Sydney and still hadn’t seen any wombats.
Our last stop before hitting the big city was Kangaroo Valley- we wanted to see if we got lucky.
So, after a delicious self-cooked meal in the blistering heat, we waited for the sun to go down, so we could start looking for wombats with a torchlight.

It soon turned out that wasn’t necessary.
Nici encountered the first wombat on her way to the toilet. He was grazing lazily right on the campsite, surrounded by some people. Some even petted him, so it was clear that he wasn’t shy. 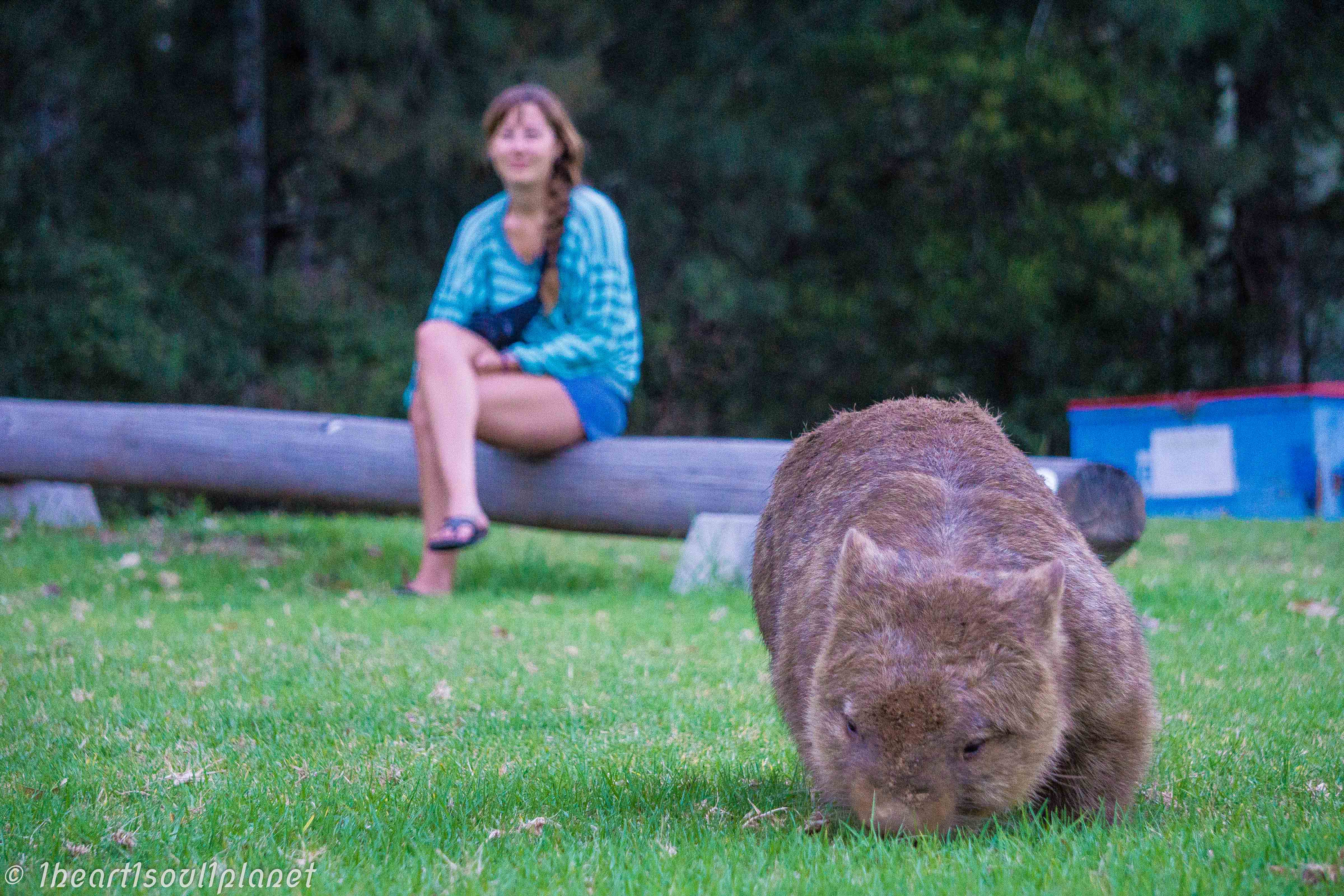 We still went for a walk, though and ended up seeing more wombats than we wanted to count.

Kangaroos were there as well, this time, bigger ones.
We liked it so much here, we decided to stay another night. Even if that meant that we had to leave very early on the next day. 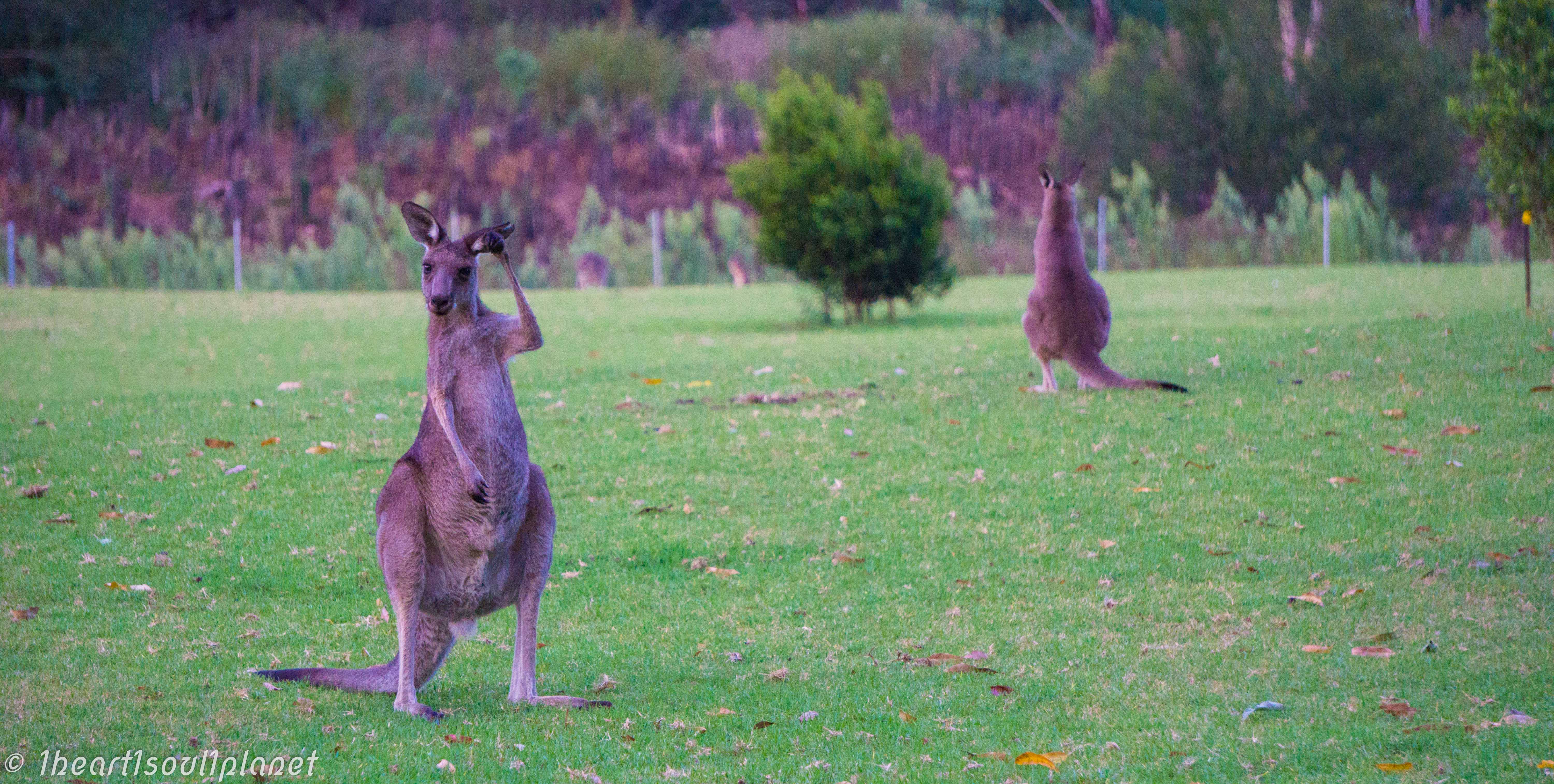 Wickie got a nice bath at the car wash and after dropping our bags off at our Airbnb, we had to return our loyal friend at Wicked Campers.

Our host, Eric, was really nice and his apartment was very comfortable and allowed us to enjoy some luxury after spending weeks on free campsites without showers and running water.

Sydney’s train system was quite convenient and our Airbnb was right next to Cabramatta station, so it was easy to get around.

It took about an hour to get to the city center.
We walked to the Opera house and enjoyed the mild day. 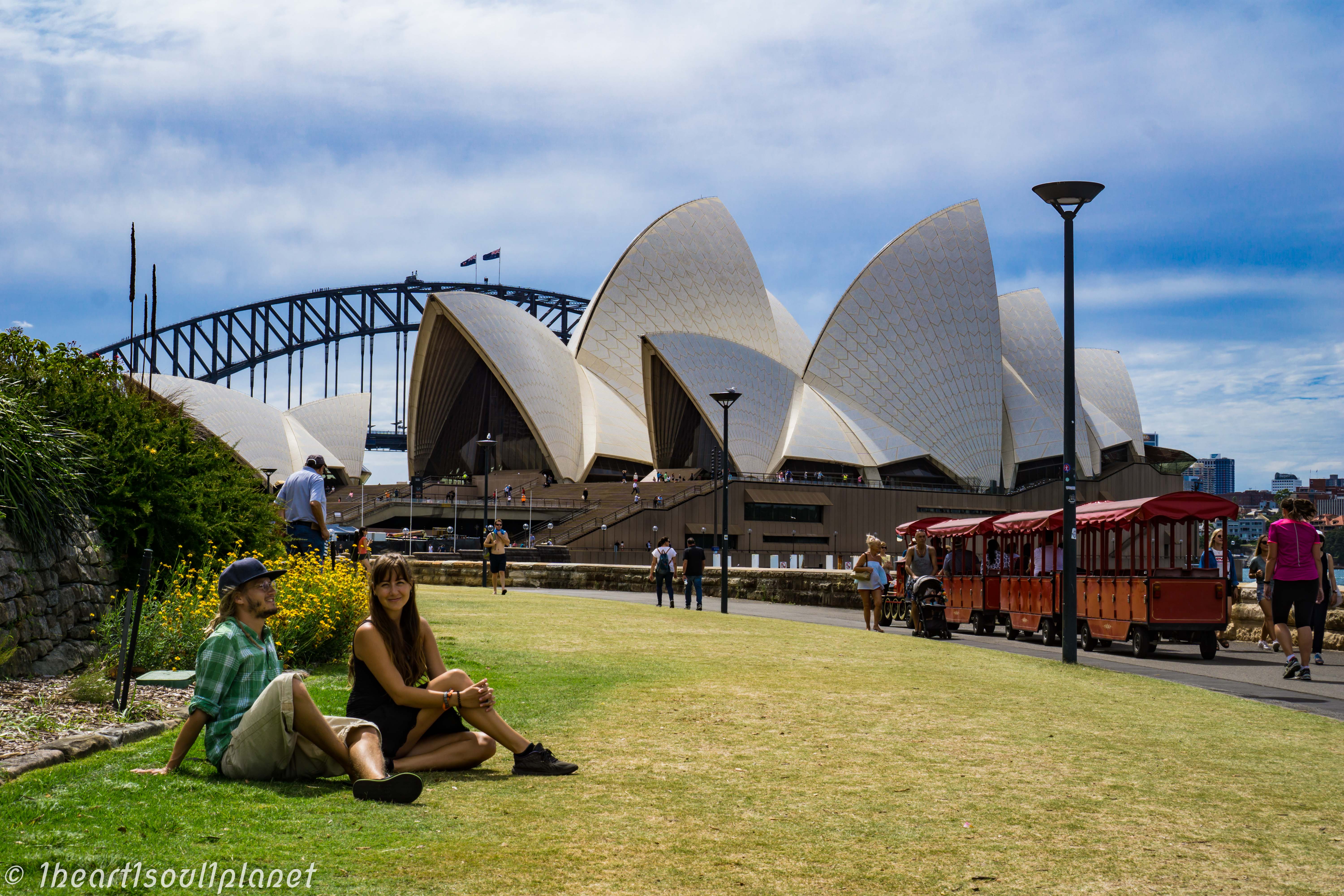 There were lots of tourists though, so we took a train over the bridge to the other side of the canal. From there, we had a great view and almost no one else was around. 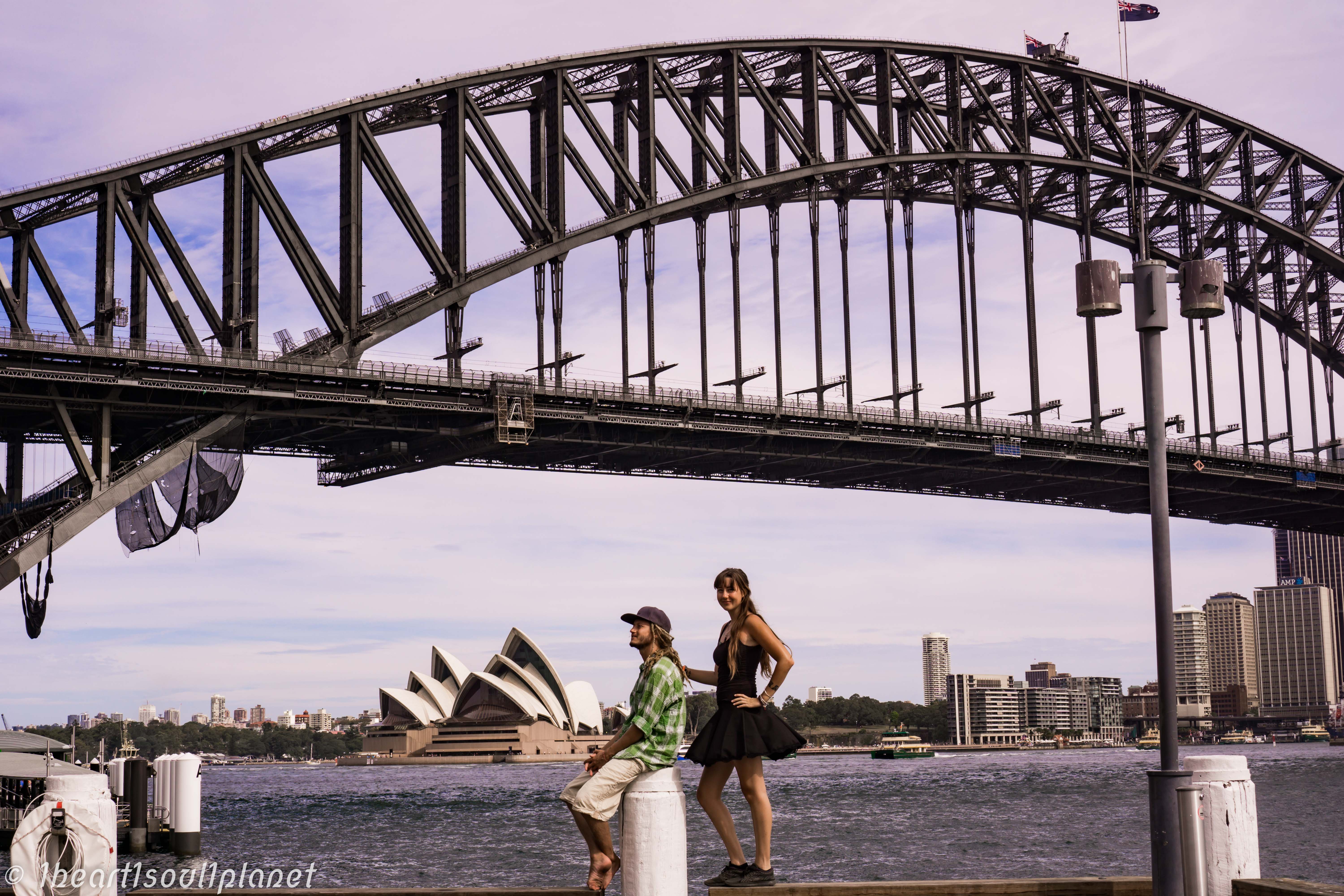 René also went to take pictures at night, while Nici stayed in Cabramatta and did some work. 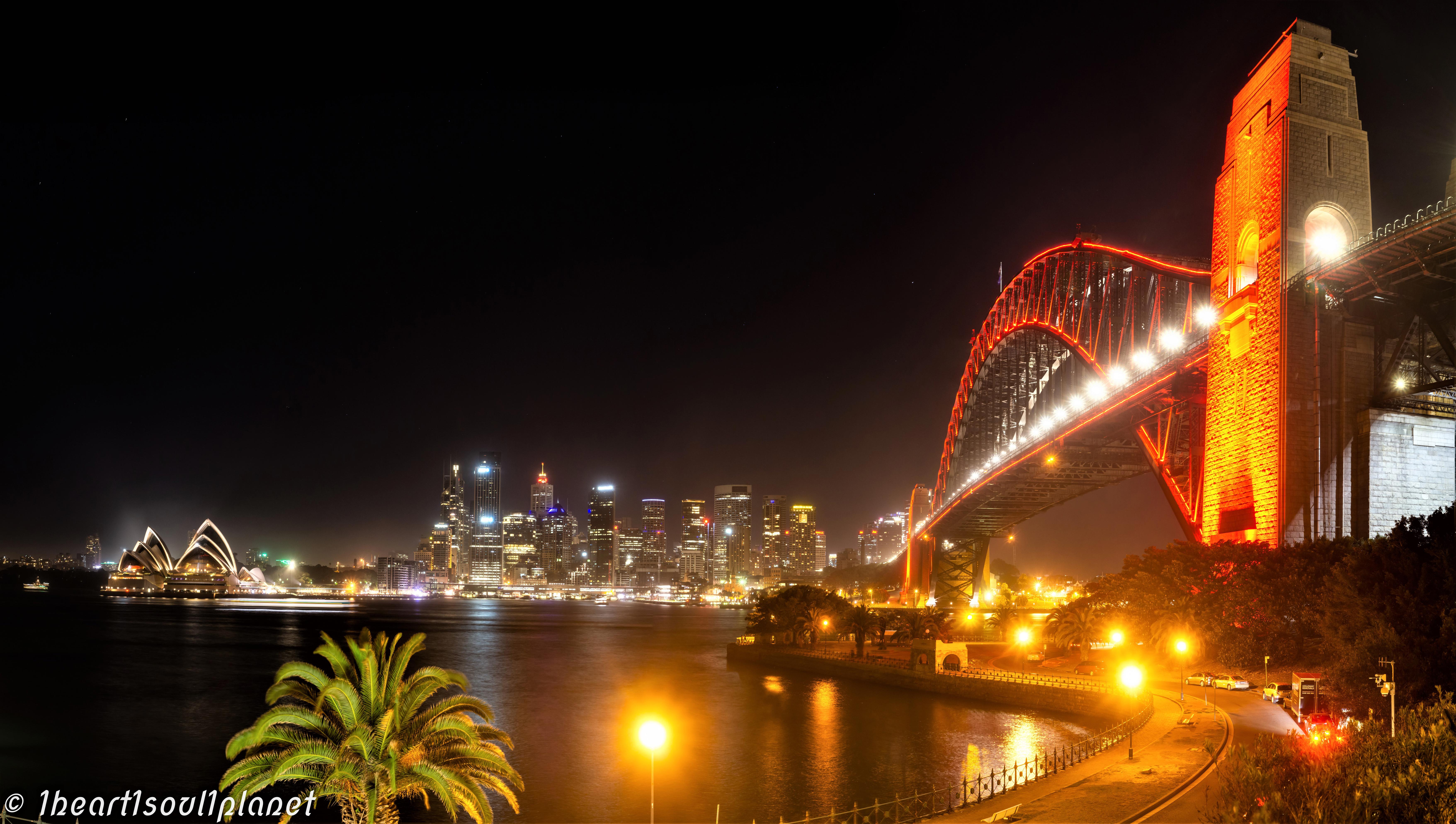 All in all, we stayed six days in Sydney, mostly relaxing, and as always, time rushed by and the day of our departure approached unstoppably.