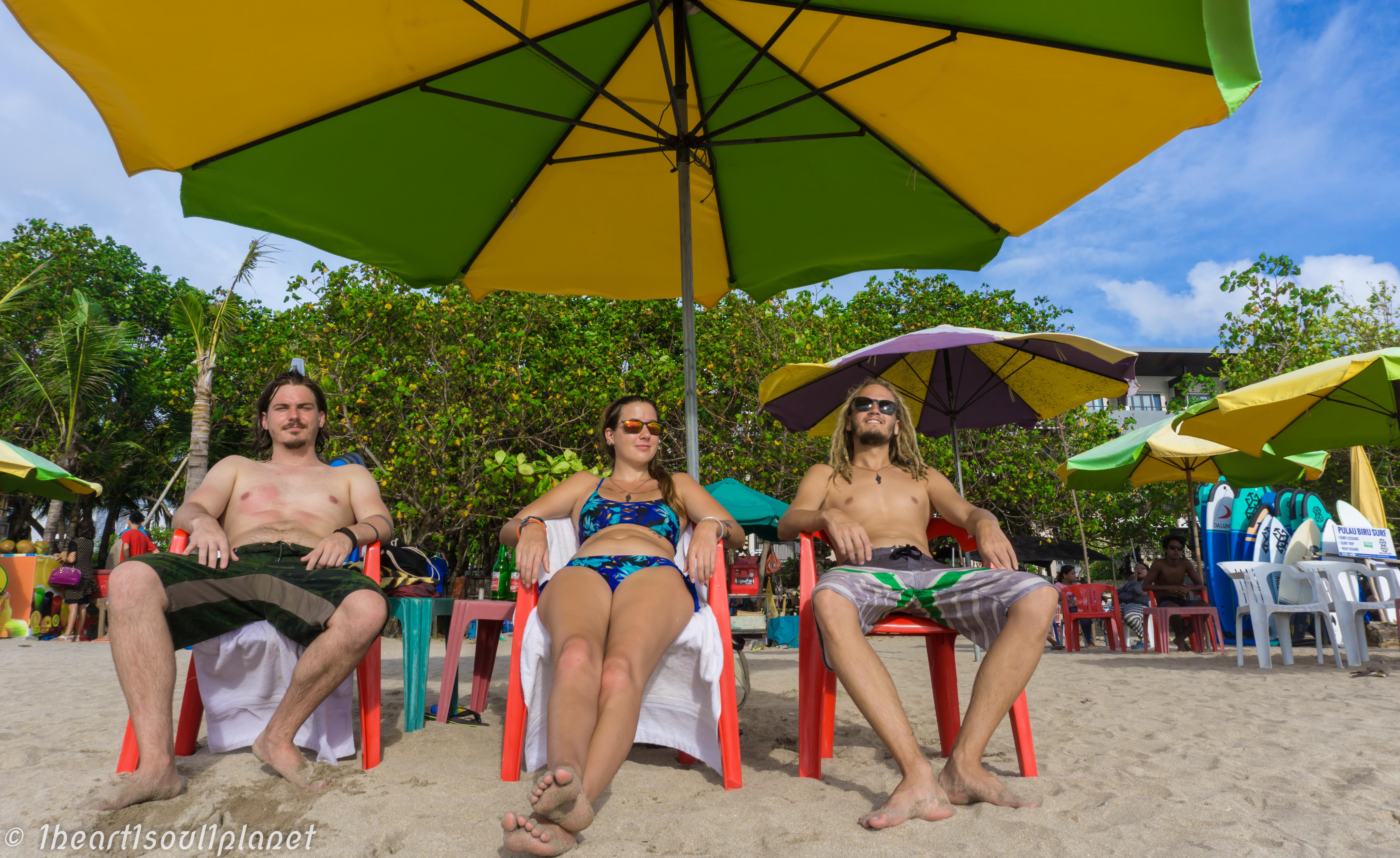 We didn’t have time to travel Malaysia as well, but we had to change planes in Kuala Lumpur, so we at least saw the airport and got to enjoy a Japanese beer.

At first, Bali looked promising.
The sun welcomed us and we went to the beach and had a couple of beers, but shortly after, thick gray clouds appeared and it started to rain. 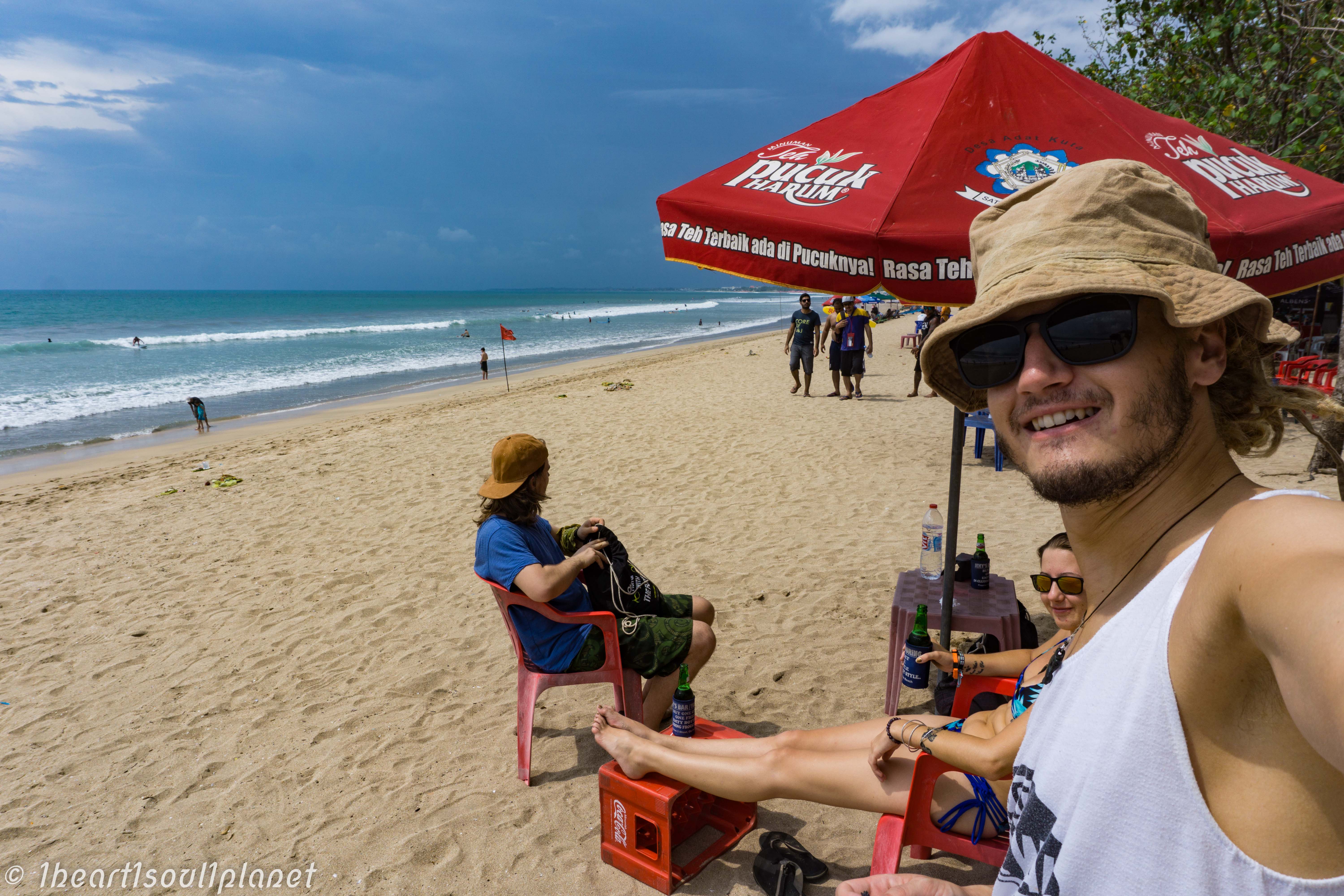 It went like that every day. First sun, then rain.
The problem is, we usually slept so long that we barely got any sun at all.

The weather in combination with the traffic and noise made us take things slow and we didn’t feel like travelling around much. We took strolls through the narrow streets with the honking scooters and markets everywhere though. The locals were very friendly but after the fifteenth time someone said: “Hey darling, shopping?” or “Hey bro, check out my shop”, we stopped saying “No, thank you.”

René travelled Indonesia more than five years ago and he was eager to show Chris and Nici the island Gili Trawangan.

A speed boat brought us there and the first thing we noticed was that there’s no traffic at all.
The only vehicles were horse carriages, which at first seemed nice, but then we noticed how awfully the horses are treated.
Many were thin with their bones showing clearly underneath their skin. Some were panting heavily in the heat and looked as though they were about to collapse, their mouths covered in foam.
The worst thing we encountered was a horse whose belly had open wounds from the straps of the carriage. The wounds were bloody and covered with flies.
Mind- or heartless tourists used the carriages as taxis and apart from us, no one seemed to care about the poor animals.
It was clear that the horses are also beaten by their owners. When we tried to pet one, approaching it slowly and carefully while speaking softly, the animal’s eyes widened in terror and it immediately backed away…

It took a lot of effort to ignore the animal abuse and try to enjoy the island.
Gili Trawangan is a very beautiful place with almost white beaches and turquoise water. Lots of restaurants are aligned on the beach and trees create shady areas to sit in. 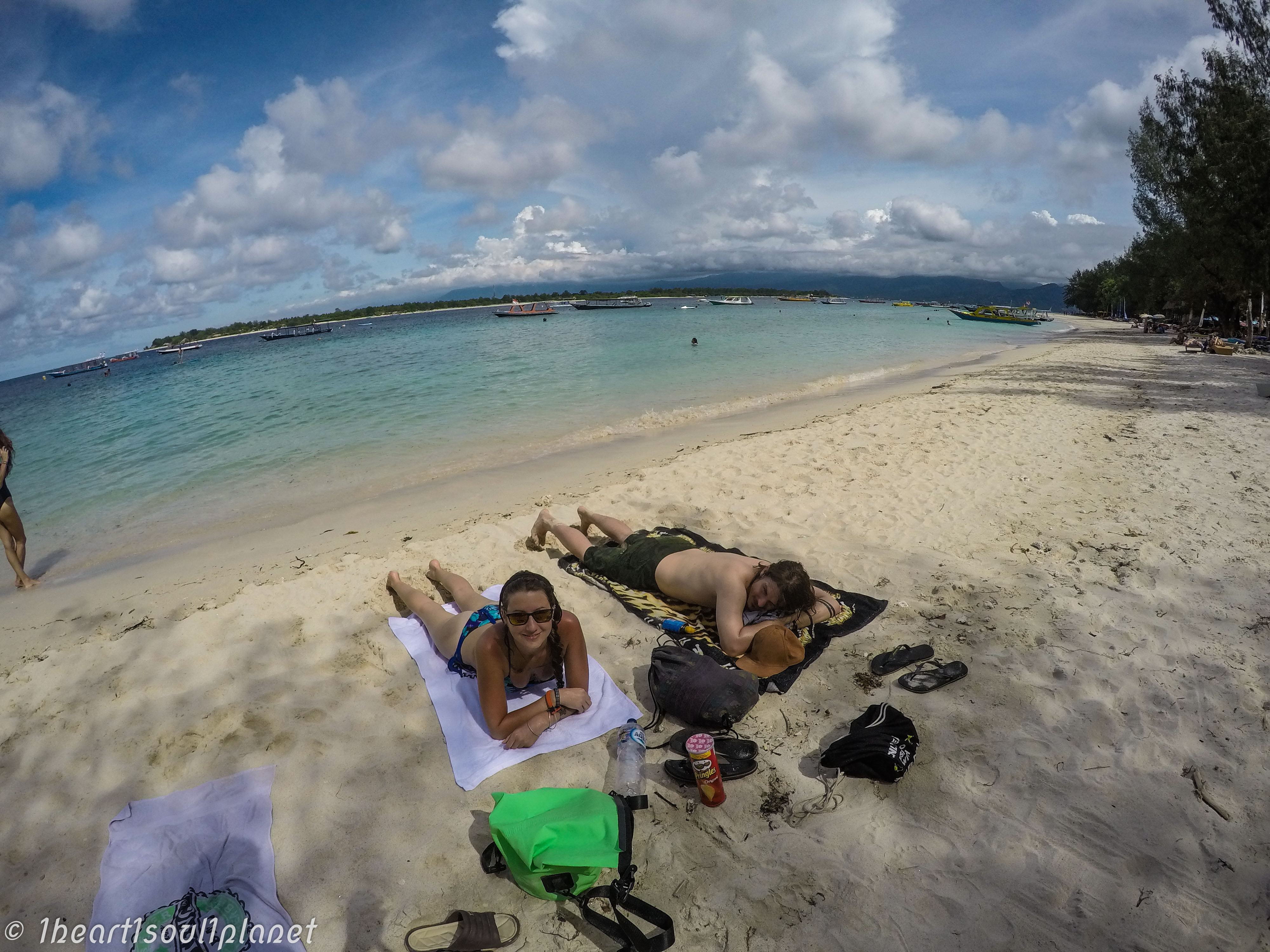 Our first day on the island was even sunny, so we packed our towels and bathing suits and walked to the beach.
As always, we underestimated the sun after our skin hadn’t seen it for weeks, and so all of us ended up with a sunburn.

The following days were cloudy or rainy again, which gave our skin time to recover, but was still a bit annoying.

We usually slept in and went to get lunch in the afternoon, then we went to the beach despite the overcast sky. 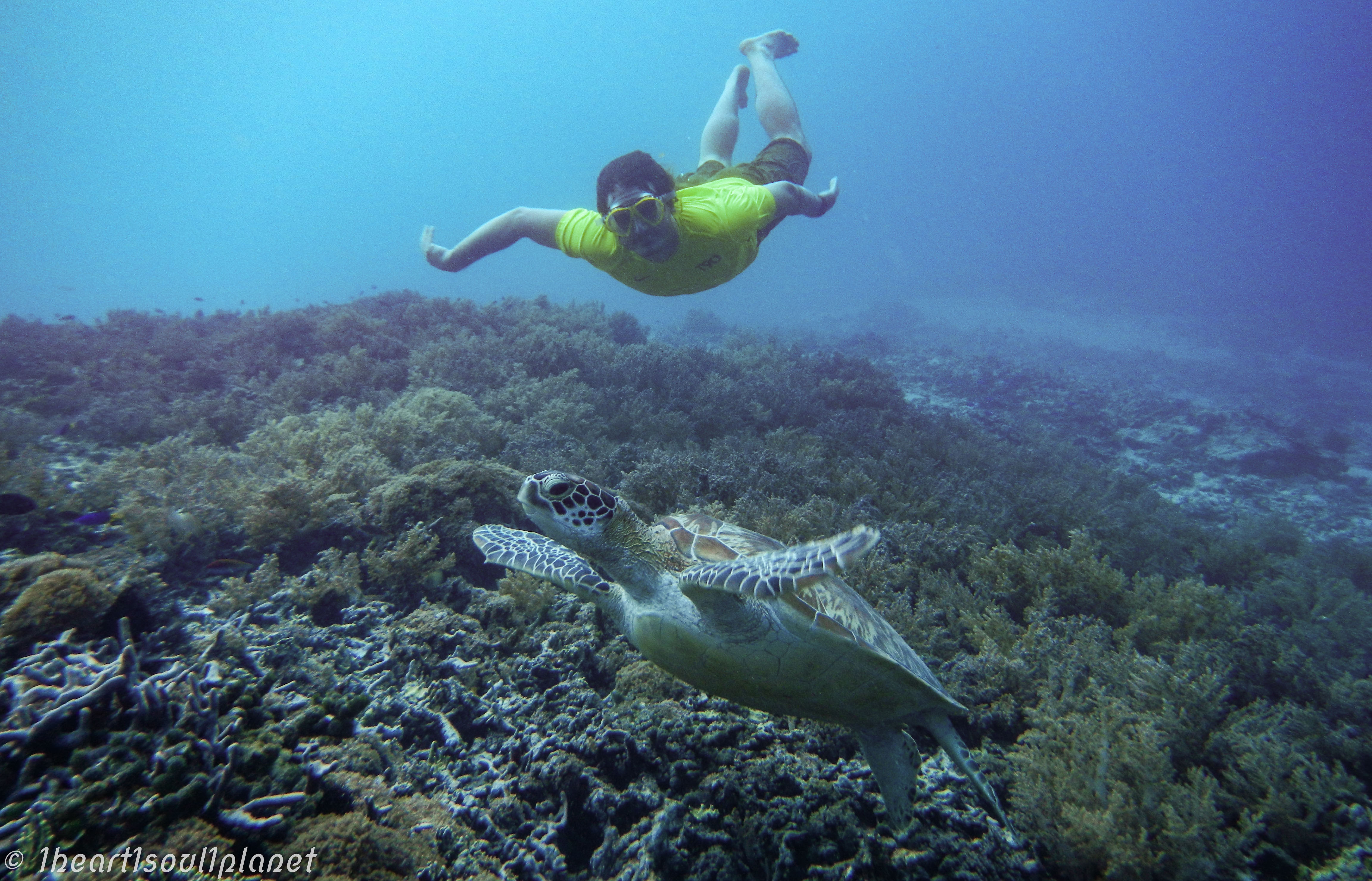 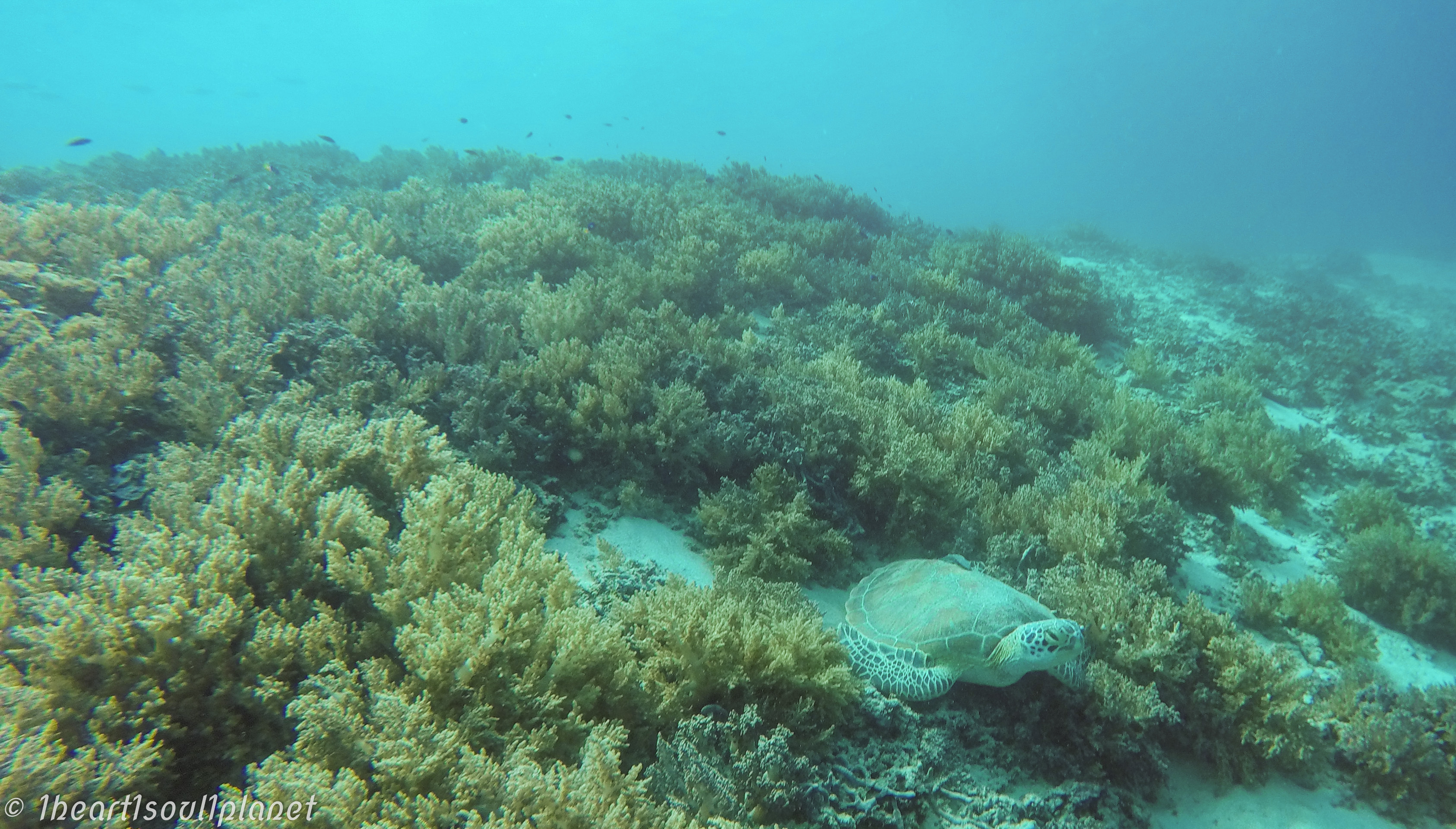 There are also lots of colorful fish and the water is quite warm, so you could probably just float around while observing sea animals for hours.

After a couple of nights in a nice homestay with friendly staff, the question was: should we go to Lombok and do a volcano trekking?
The volcano was covered in clouds every single day though and so we decided against it and instead, we changed into a guesthouse that’s closer to the beach… and further away from the mosque. We usually enjoy listening to the prayers, but here on the island, they sang or prayed all the time. Literally all the time!
The island’s rather small and there are about four mosques on it and each of them barely ever takes a break from sounding the prayers. We wonder, if it’s because they feel they have to make up for the “sinful” tourists and their parties. Sorry if it sounds disrespectful, but it was really annoying.

Gili Trawangan has a great nightlife to offer. Of course, this attracts party-tourists and especially René was a bit disappointed, because five years ago, the island used to be almost empty and untouched.
Now, there are many clubs right at the beach.
There’s a good system, however. Every club gets to host a big party about once a week. That way, there’s always something going on but there’s no fight for customers.
Our favorite place was definitely the Sama Sama bar, a reggae concert location, where a Bob Marley cover band played about every evening.

One day, when it wasn’t raining, we strolled around the whole island, especially interested in the sunset beach, where René had enjoyed magnificent sunsets five years ago.
Well, again he was disappointed. Every single spot has been built on. There are now lots of ‘sunset bars’ aligned on the beach.
Because of the clouds, it wasn’t possible to see the sunset anyway, but at least we got some exercise by walking around the island.

René also went diving twice in the morning and even saw sharks! 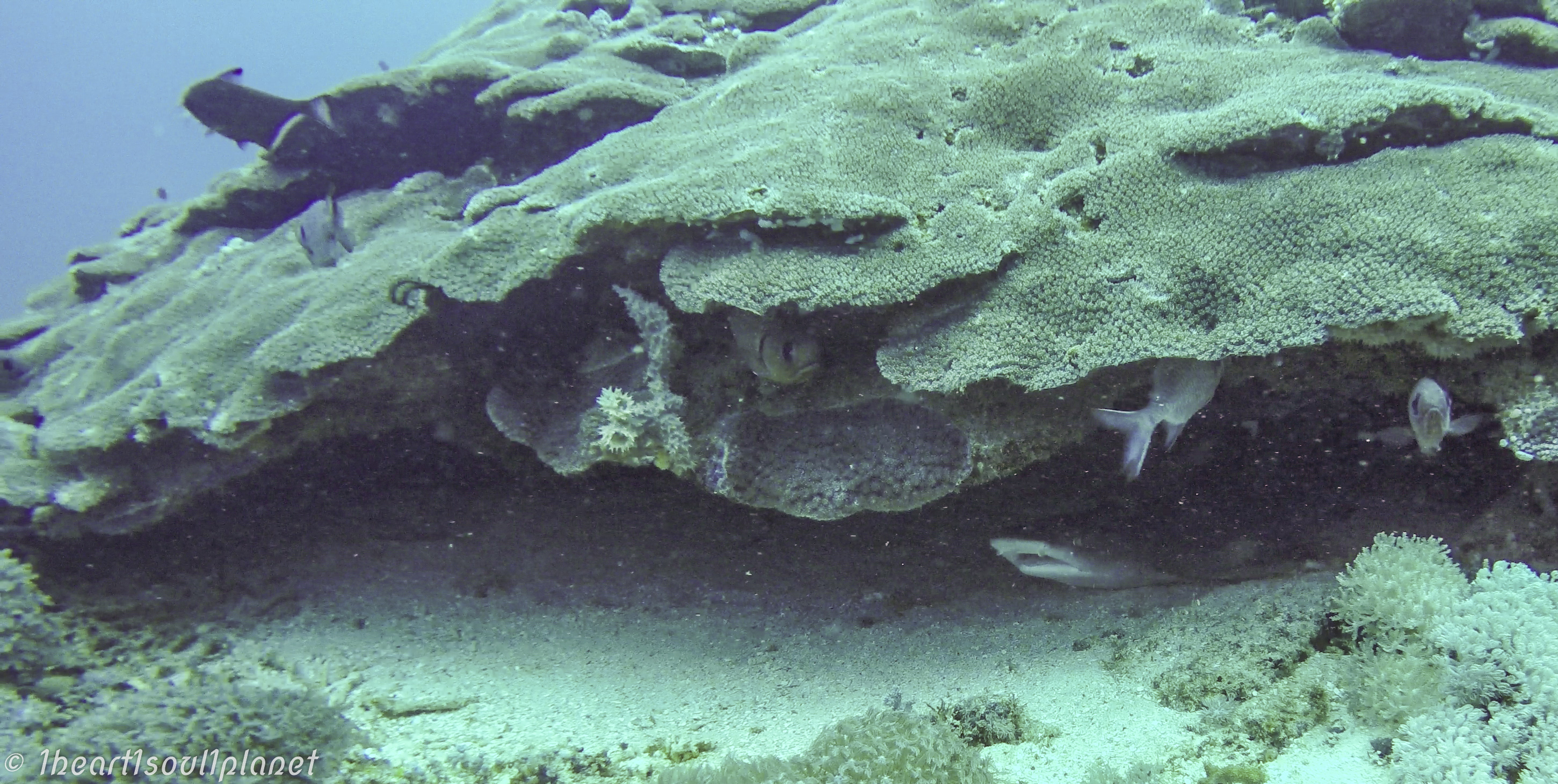 And when snorkeling, he got bitten by a trigger fish…

After about ten days on Gili Trawangan, we took the speed boat back to Bali, where we had booked a room in Grandma’s Plus hotel.
There, we enjoyed some more luxury and Chris did some shopping in Kuta, before going home.
The weather was nice as well and we all tried surfing- which was definitely easier for René and Chris because they’re good snowboarders. Even Nici managed to stand up on the surf board at least once. 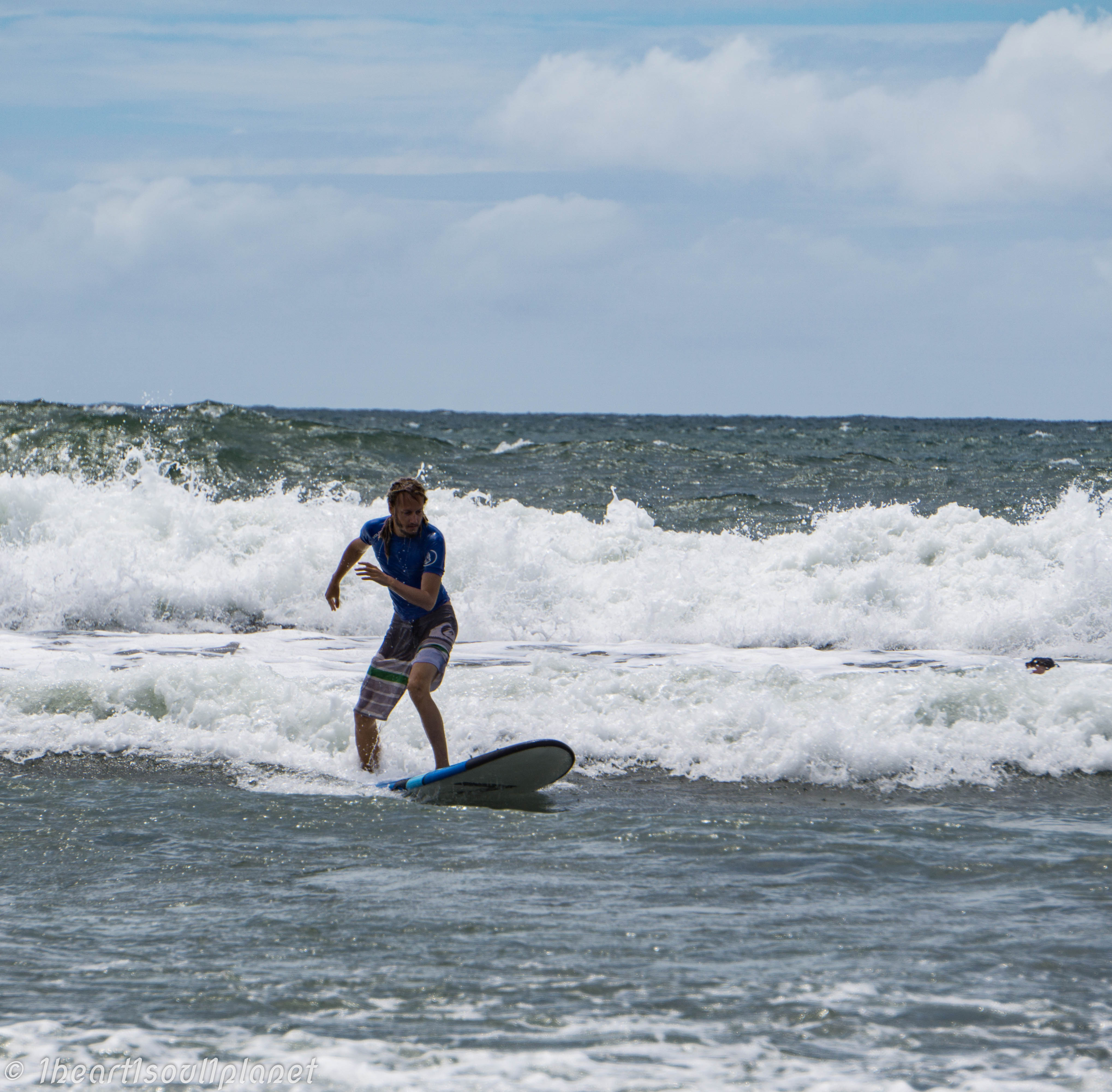 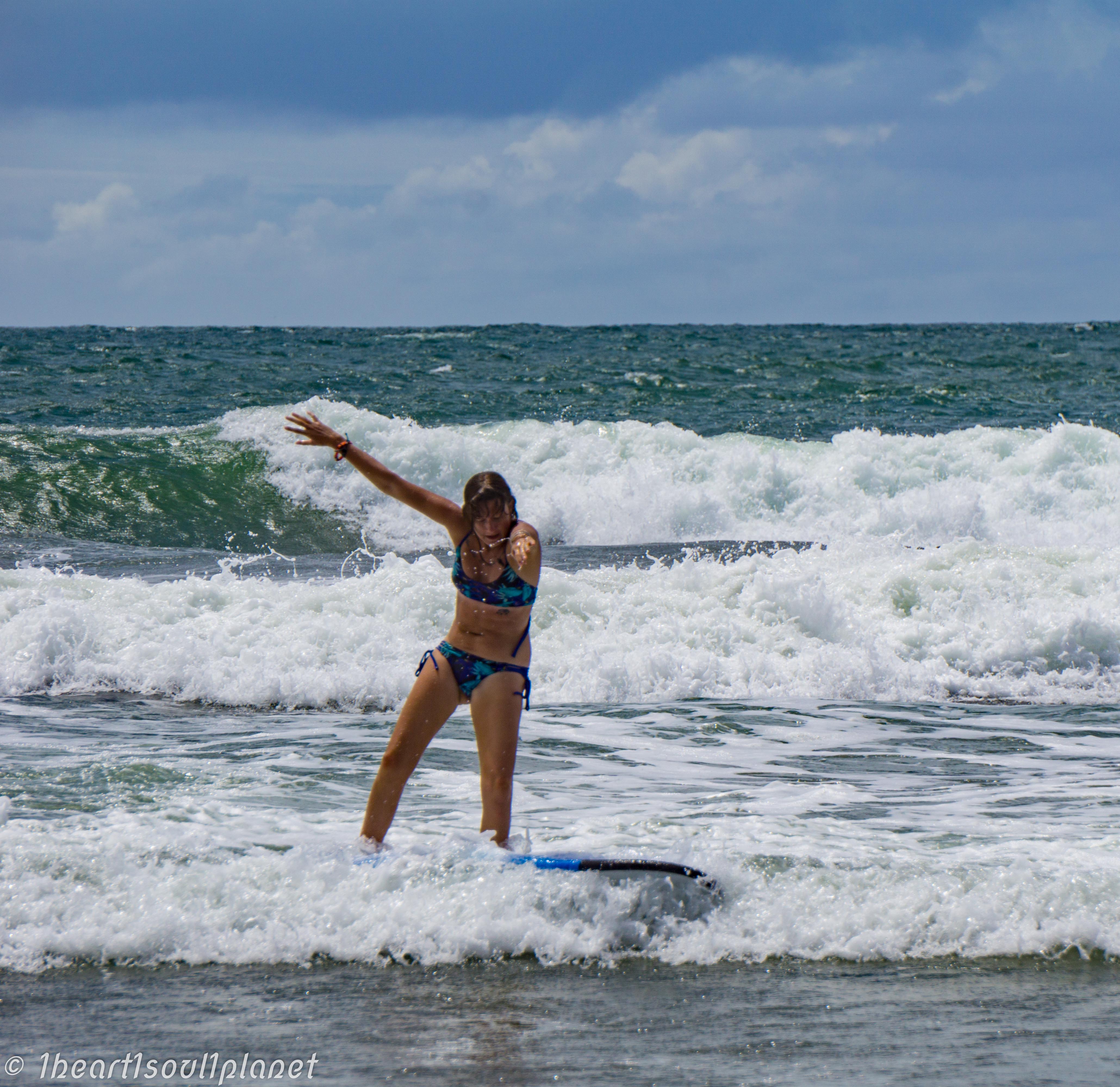 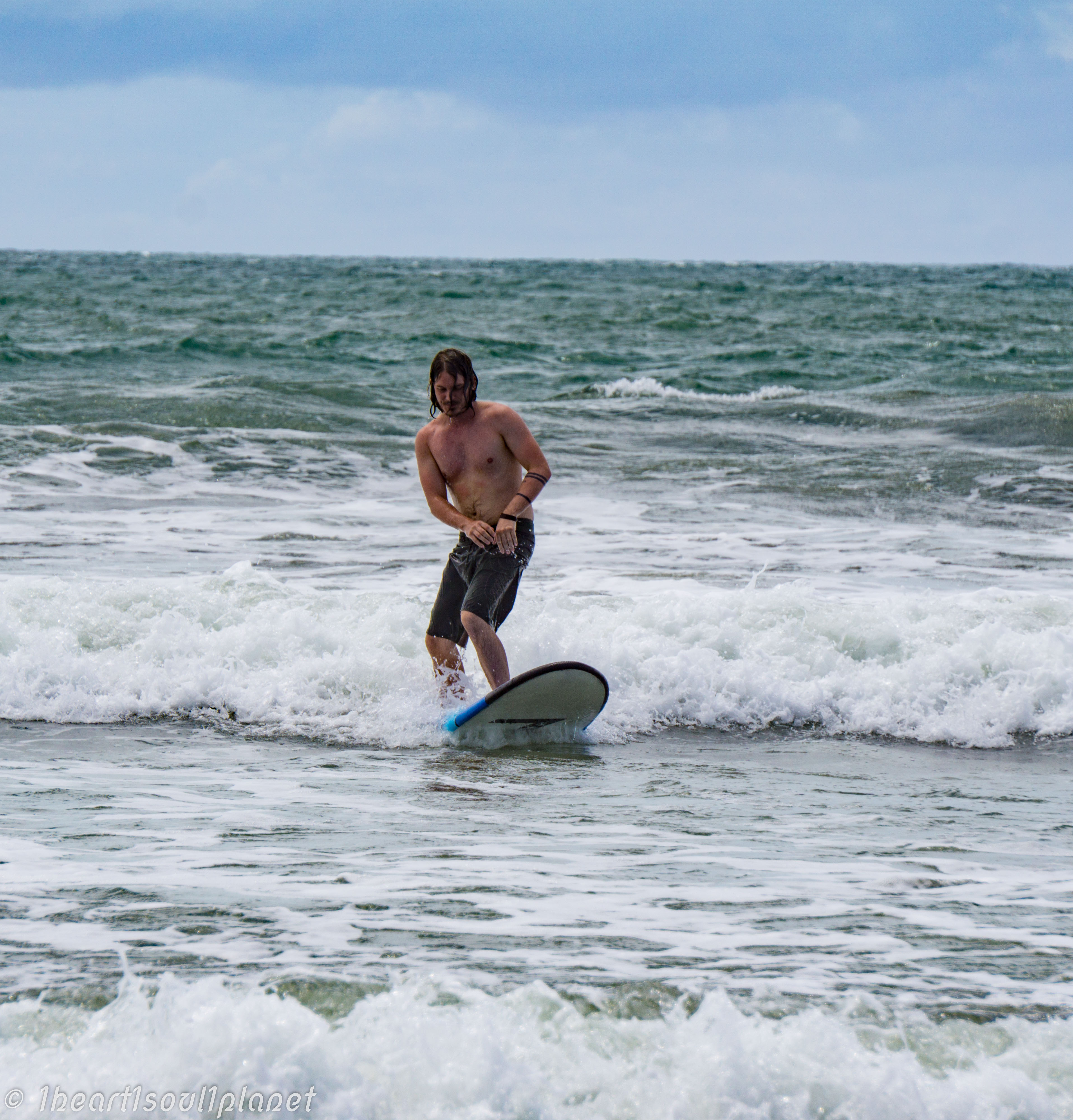 Chris then left us and flew home on the nineteenth of January.
Since René’s birthday is on the twenty-first, we decided to stay three more nights at Grandma’s. On the day of his birthday, we enjoyed an afternoon in the spa.

On January 22nd, we took another speed boat to Lembongan.
That island looked very promising as well. There was traffic, but not as much as on Bali.
Again, it was sunny on the day of our arrival and we got to enjoy about an hour by the pool, before the rain started.
And then it rained every single day… again.
Well, at least that gave us time to organize our future travels and book all flights.

There was one day without rain, so we rented a motor bike and drove around the island. Lembongan has beautiful cliffs to offer and we even found a natural infinity pool on one of them. 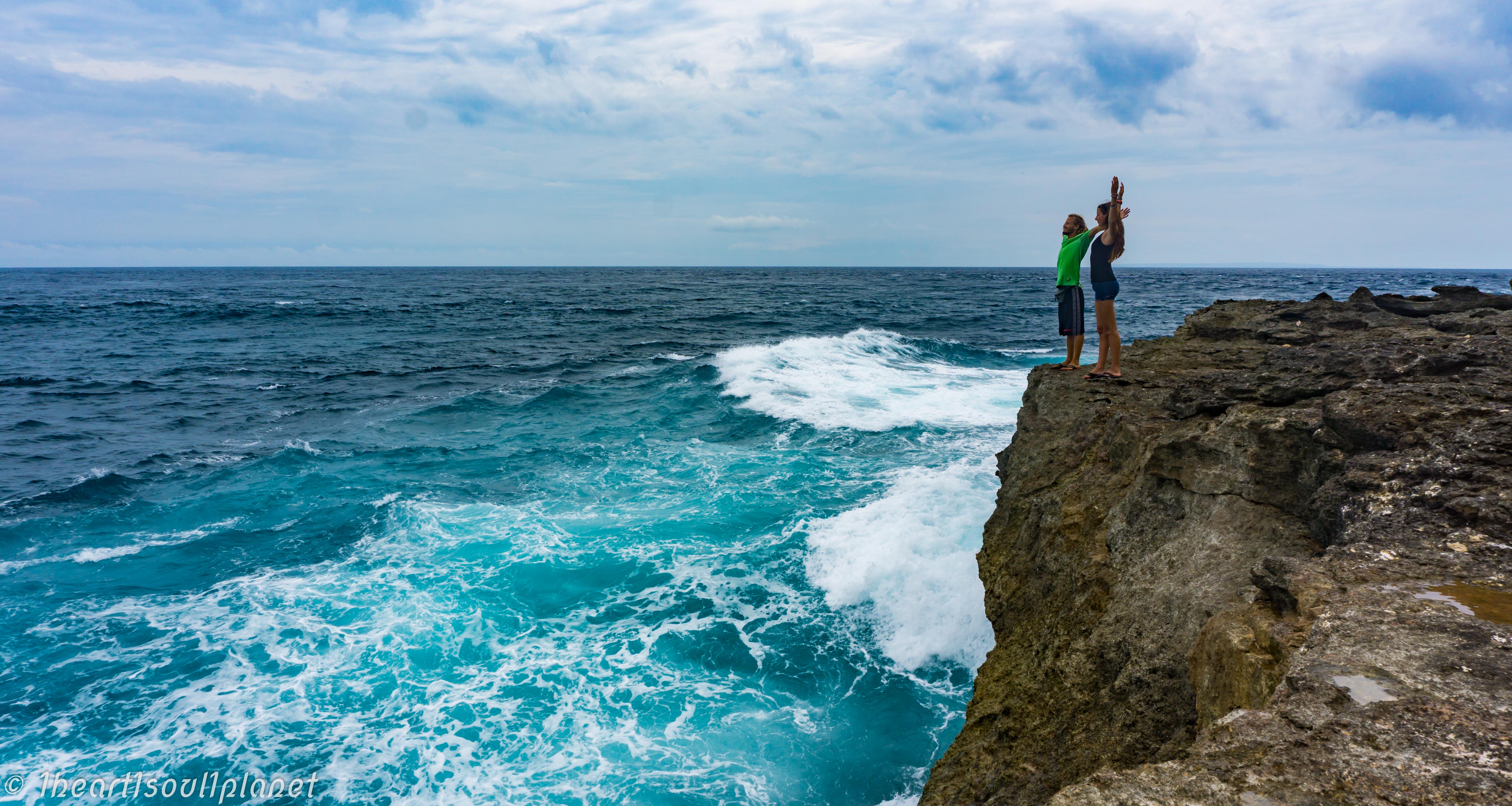 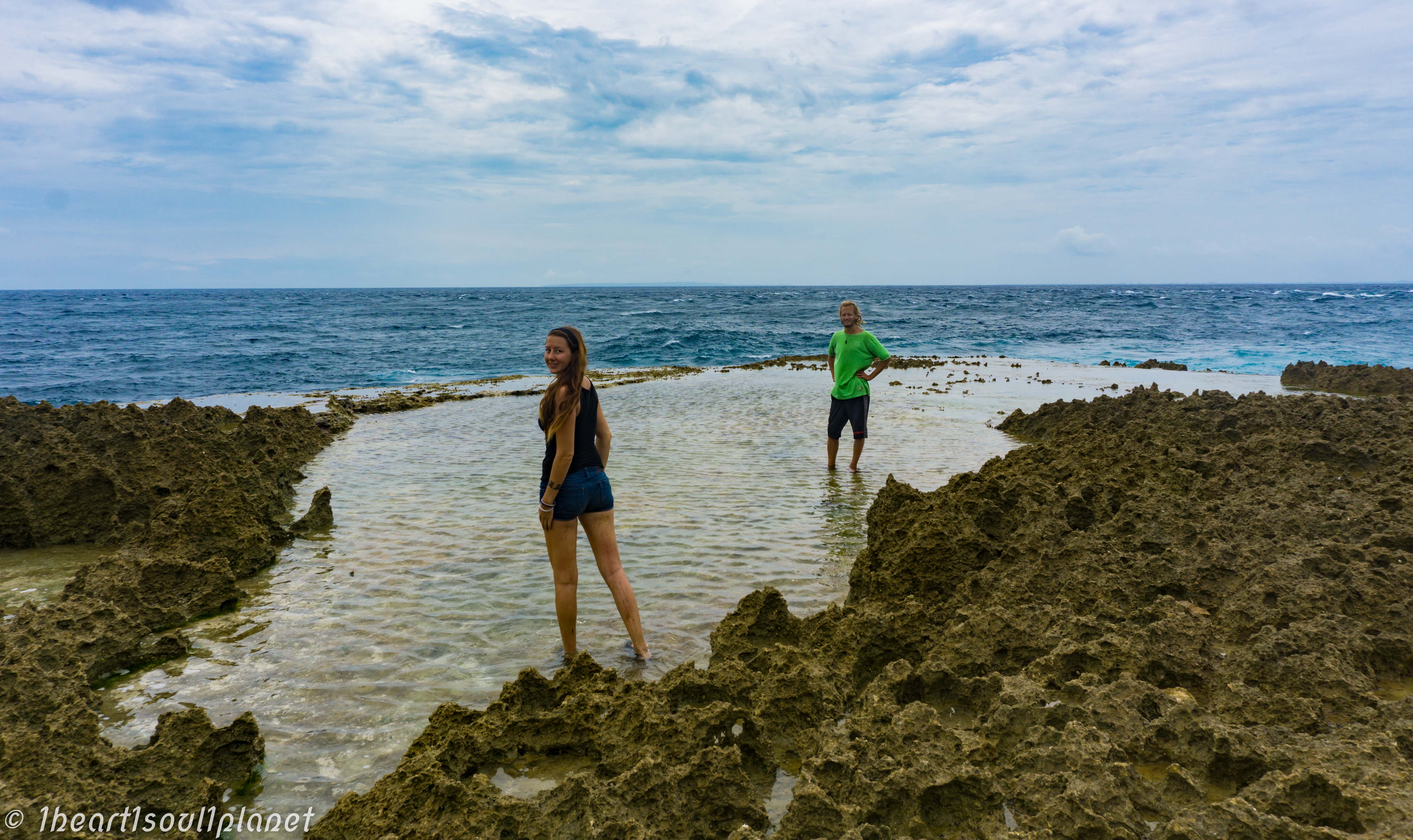 We also wanted to go diving to see manta rays, but the waves were too high so no boats were going there.

With nothing to do and the rain starting to really annoy us, we decided to go back to Bali sooner than planned.

This time, we booked a room in Grandma’s Plus hotel near the airport, which has a pool and two vegan restaurants nearby.

Here, we spent our rainy days watching Netflix and the sunny ones by the pool, before catching our flight to Australia on January 31st.