The weather forecast for Koh Lanta showed rain… lots of rain. But it was the same on every other island, except Koh Chang and we had made our decision.
On that morning, we went to get Tofu Schnitzels with Fries from Yang’s and ate it on the boat.
We had to change the ferry on Koh Phangan and so we at least saw its haven, though we didn’t go anywhere else.

The next ferry brought us to the mainland and from there, a bus went to Krabi. Everything seemed to be going great, but we were only a couple of minutes late and apparently, that was enough to miss the next bus.
We then had to get a private taxi, which cost us 1000 Baht per person. The transportation prices in Southern Thailand really are appalling. They’re almost as high as prices in Europe. At least you get quite luxurious vehicles and they’re very reliable, but we’d rather have lower prices and less luxury.

Well, having a whole minivan to ourselves was something else and our driver brought us straight to our hotel on Koh Lanta.
We were lucky, because the reception closed at 9pm and we arrived at 8.45pm.
We had booked three nights in one of the Maikeaw bungalows, near the Maikeaw cave. The food in the restaurant there was very cheap and tasty, though they didn’t have tofu.
Our bungalow was way more than we had expected. It was huge, with a King size bed and a nice bathroom. There was a porch with a hammock as well, from where you could overlook the whole garden. The bungalows lie right in the middle of a rubber tree farm and while you can’t hear the waves there, you can fall asleep to the rustling of leaves and the singing of birds. 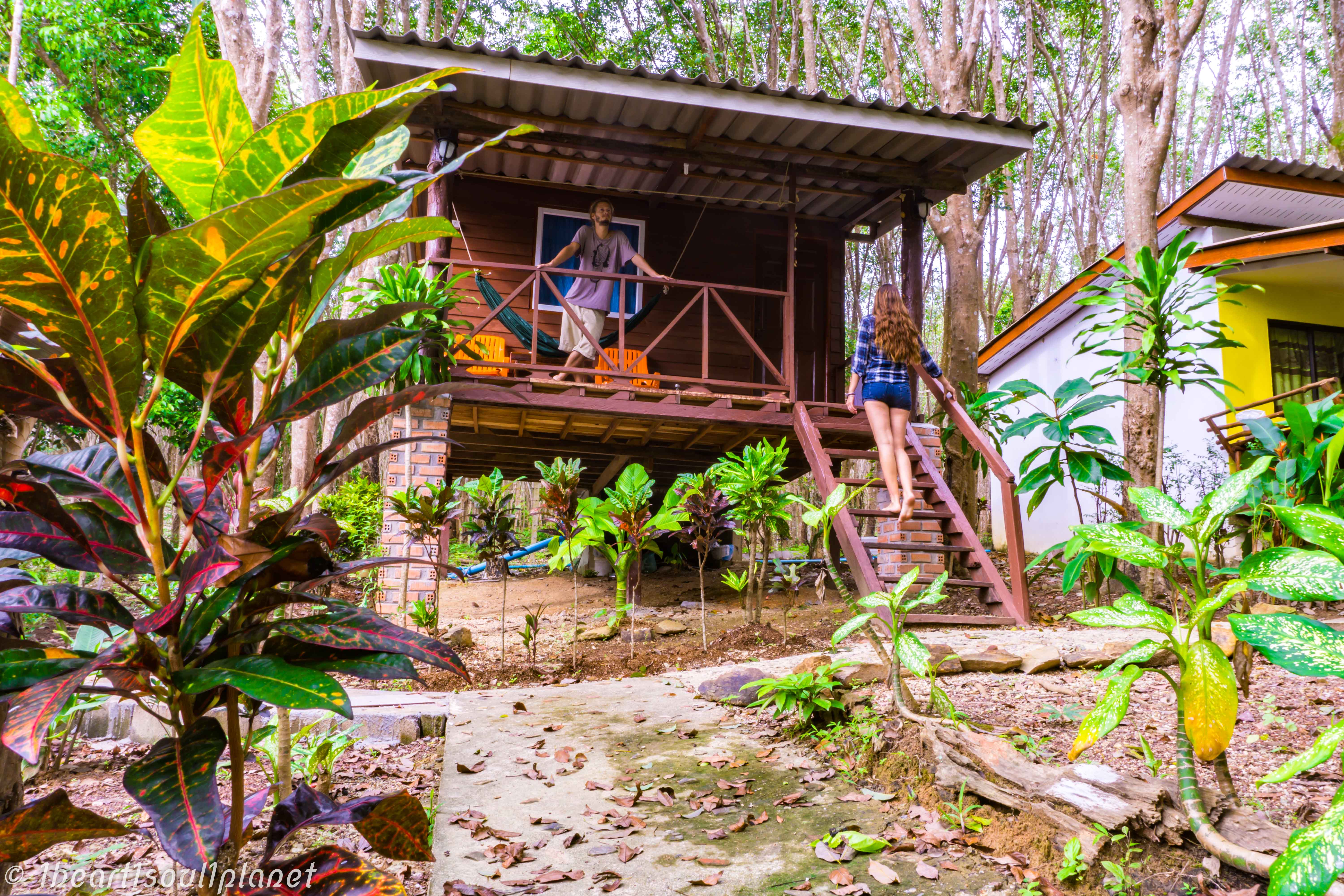 It rained all the time and we were homesick and therefore in a bad mood, but because the bungalow was so nice and the staff so helpful and friendly, we extended our stay to six nights. We also had very strong wifi in the bungalow, which allowed us to spend a lot of time lying in bed and watching Netflix.
No idea if it was the especially comfortable bed, the forest around us or the sound of the rain on the roof, but we slept exceptionally well here.

We then rented a motor bike and went to explore the island. There are a couple of vegetarian restaurants that aren’t bad, but they couldn’t compete with our favorite places on Koh Tao. We did however, find a tattoo place with acceptable prices, and Nici got her first bamboo tattoo. 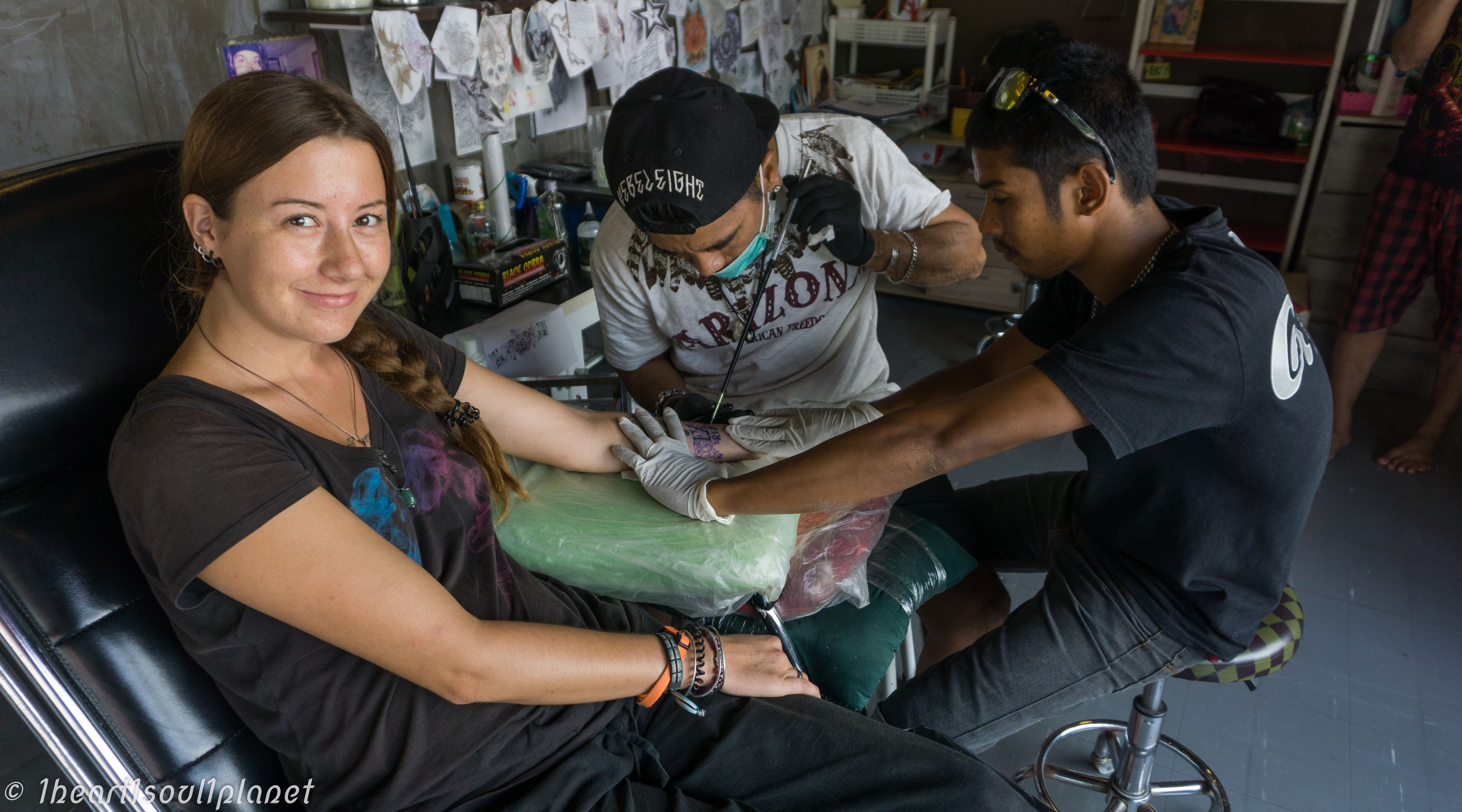 The weather got nice on our last days on Koh Lanta and we were able to keep our tan. The beaches weren’t very appealing to us, but we sound a bit snobby when we say so. Maybe it’s because we’ve been to Sri Lanka, because now, even the smallest amounts of trash make us not want to go bathing. Also, because our bungalow wasn’t near the beach, we didn’t really feel like beaching around. We visited a couple of places though and took pictures.

On our last day though, we came across a wonderful beach on Koh Lanta’s East Coast. It was a stunning little place that belongs to a Guesthouse. If we had known about it beforehand, we’d have booked a couple nights there as well! 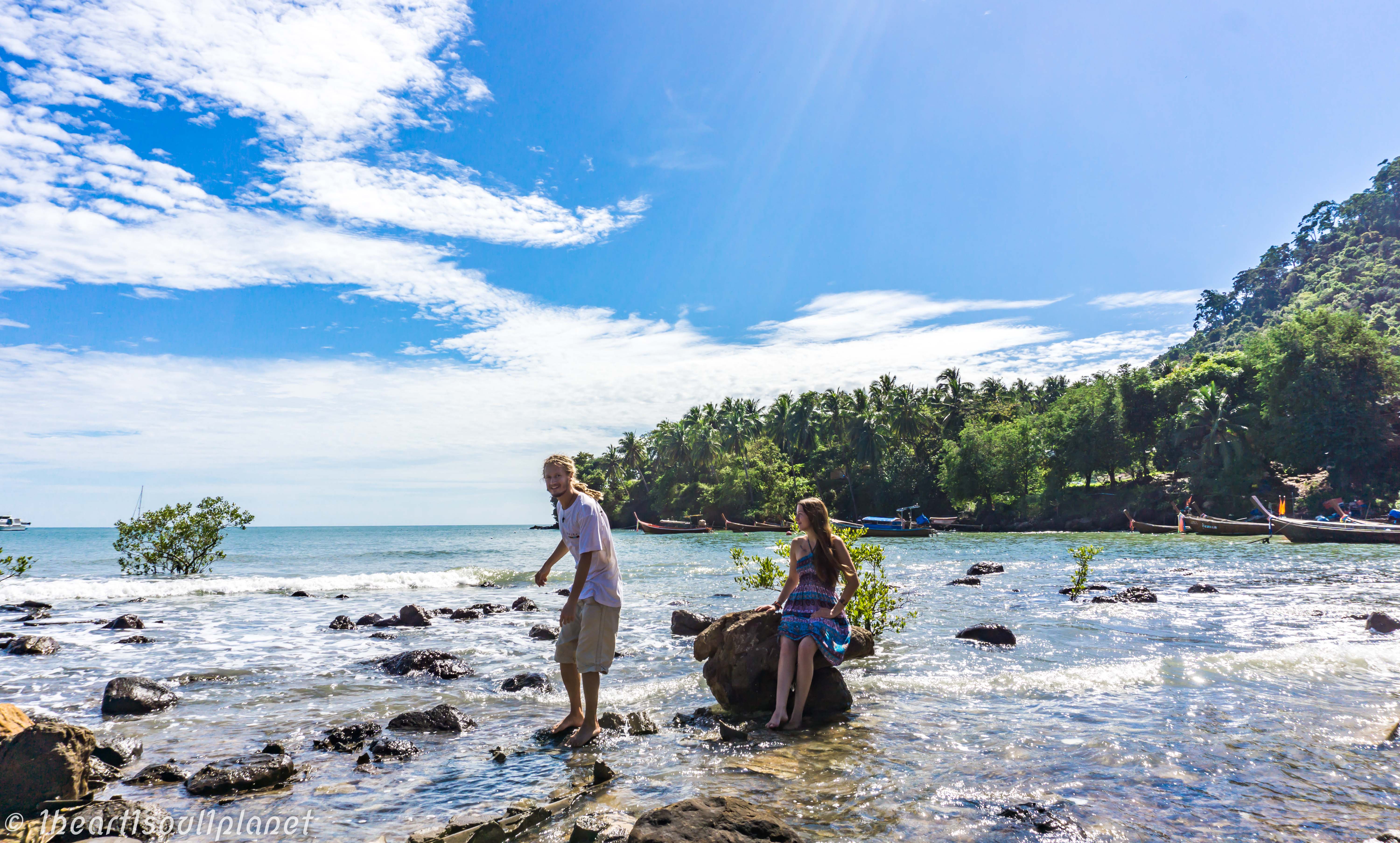 That evening, we met Nici’s school friend and her boyfriend and found a very nice restaurant which served lots of vegetarian dishes.
It was special to suddenly speak Swiss German with someone else than each other, but it was really nice to be able to catch up and exchange travel tips :)

We had gotten ferry tickets to Aonang (Krabi) and this time, it was a smaller boat and we stayed on the deck, where we got a little bit sunburned, but hell, was it worth it!
For those of you who don’t know: Krabi is the place you usually see, when you google Thailand. It’s where the famous beaches with the huge rocks are and our boat went straight past those rocks… that was absolutely stunning!

We had booked three nights in a Lakeside bungalow, and again, it was a very nice one, we even had a pool.
Jonas, our friend from Koh Tao, had also booked one of those bungalows, so we could meet up again. 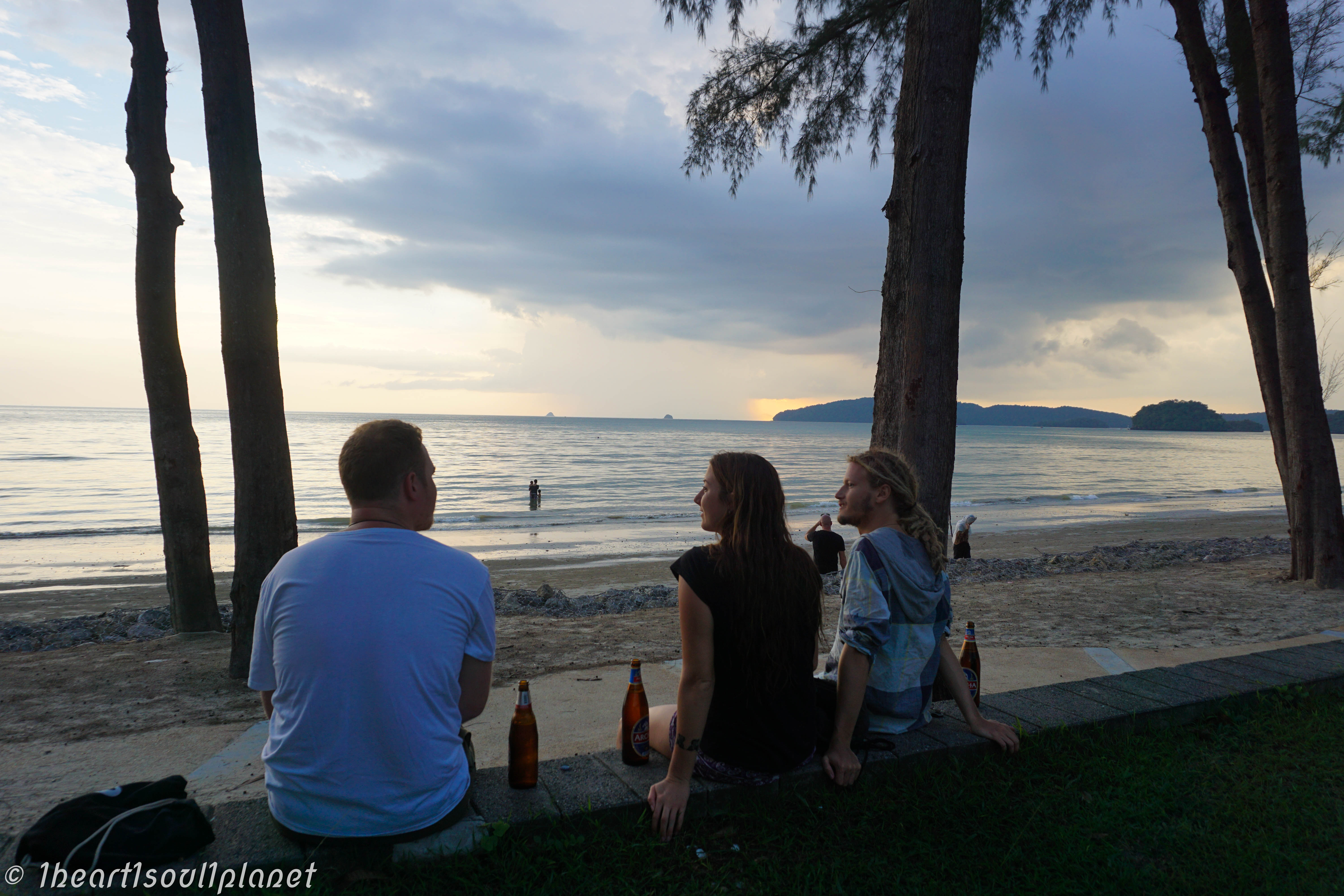 The weather was more than nice, even a bit too hot, to be honest… but we don’t really dare complaining, after having already complained about the rain ;)
Anyway, Aonang is super touristic and it wasn’t easy to find restaurants that serve affordable food. We managed, though and found a place called DS restaurant, where they had lots of delicious vegetarian dishes for a cheap price.

On our first day, we wanted to see the monkey trail, but there were no monkeys at all. We found another friend, though, Robin, from Germany.
From then on, it was always the four of us and we planned on getting together to drink beer and play cards, but Nici had gotten too much sun on the ferry and still felt sick days later, so we never stayed up late.

The last day in Krabi was a great one.
We got up early and took a longtail boat to Railay beach, where we rented a Kayak and explored the ocean. Or parts of it, at least. 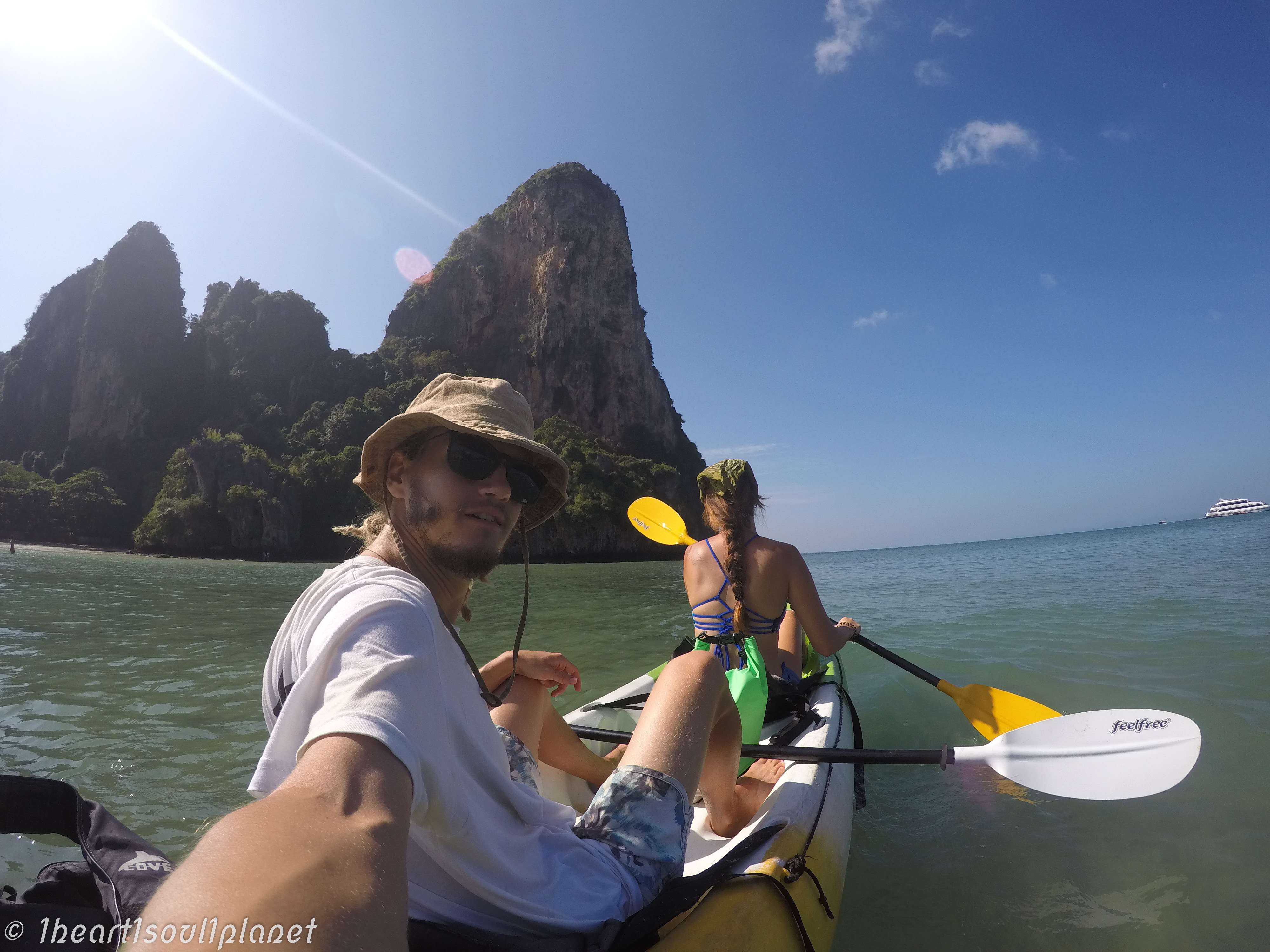 We found a nice little (almost) private beach, where we parked the kayaks and went snorkeling. 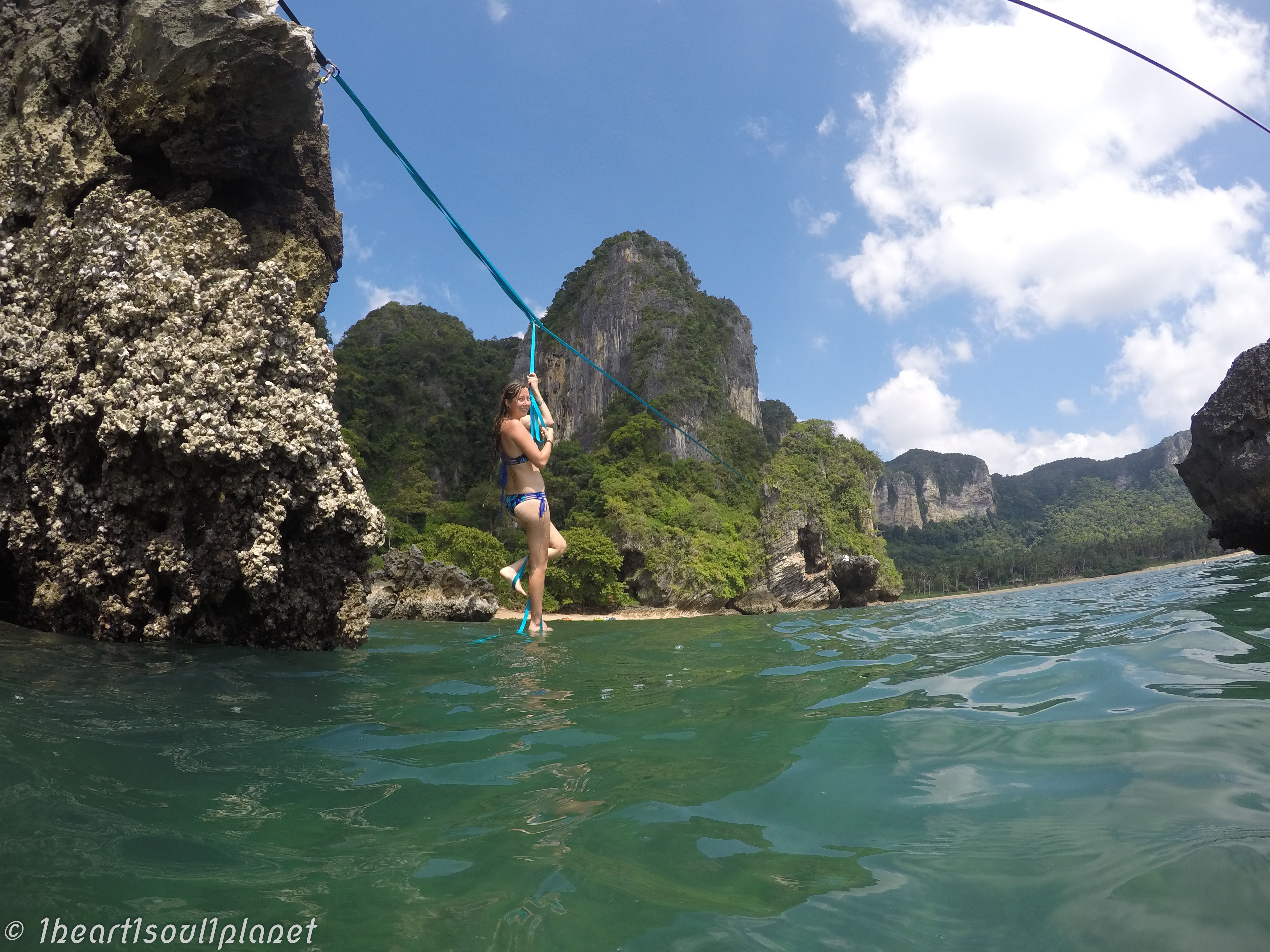 Back on land, we hiked up to the viewpoint and then down to the princess lagoon. We wore only flip flops and the hike was more of a climb, through muddy clay and down bamboo ladders, which looked like they were about to break.
We survived all of it though and reached the princess lagoon. 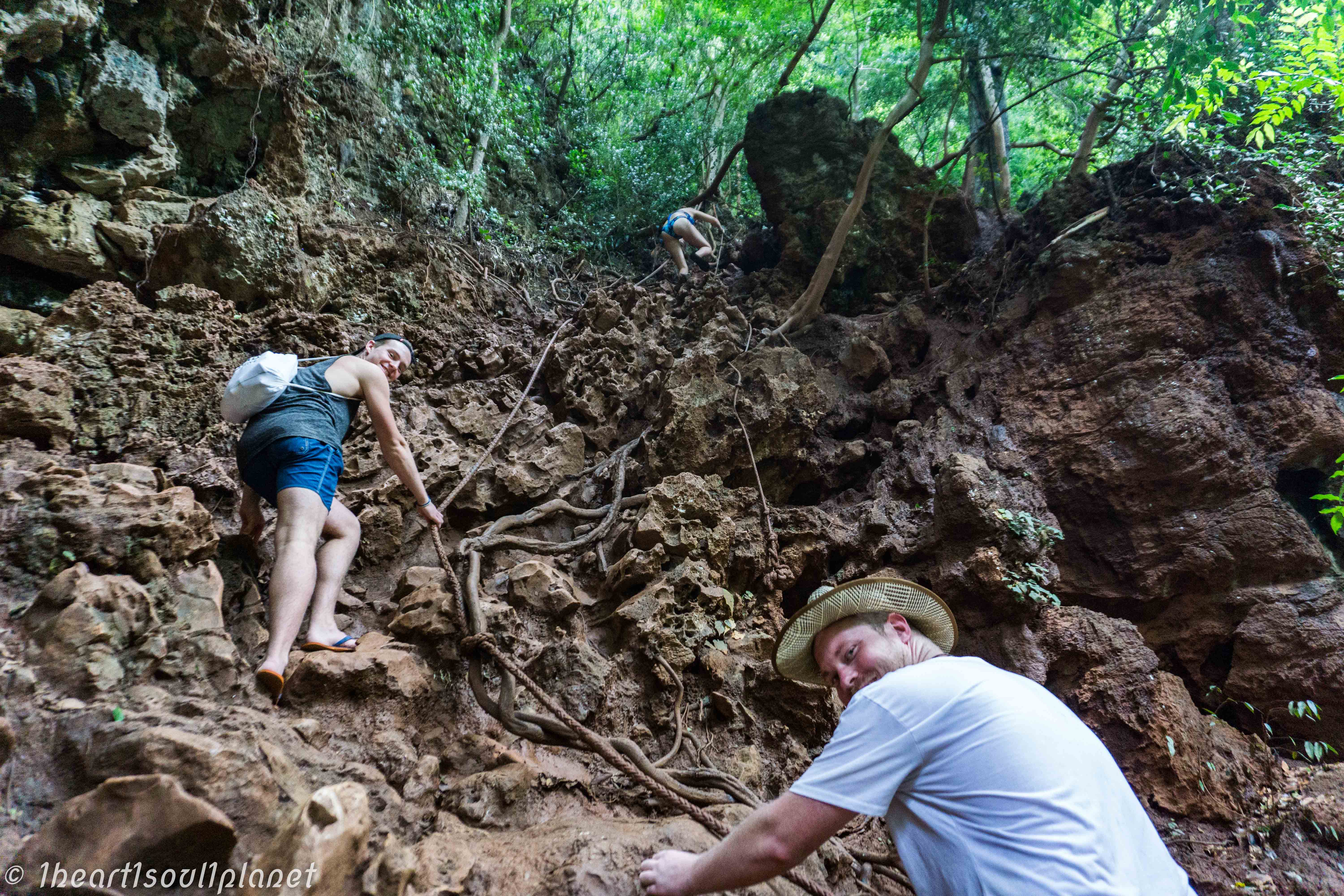 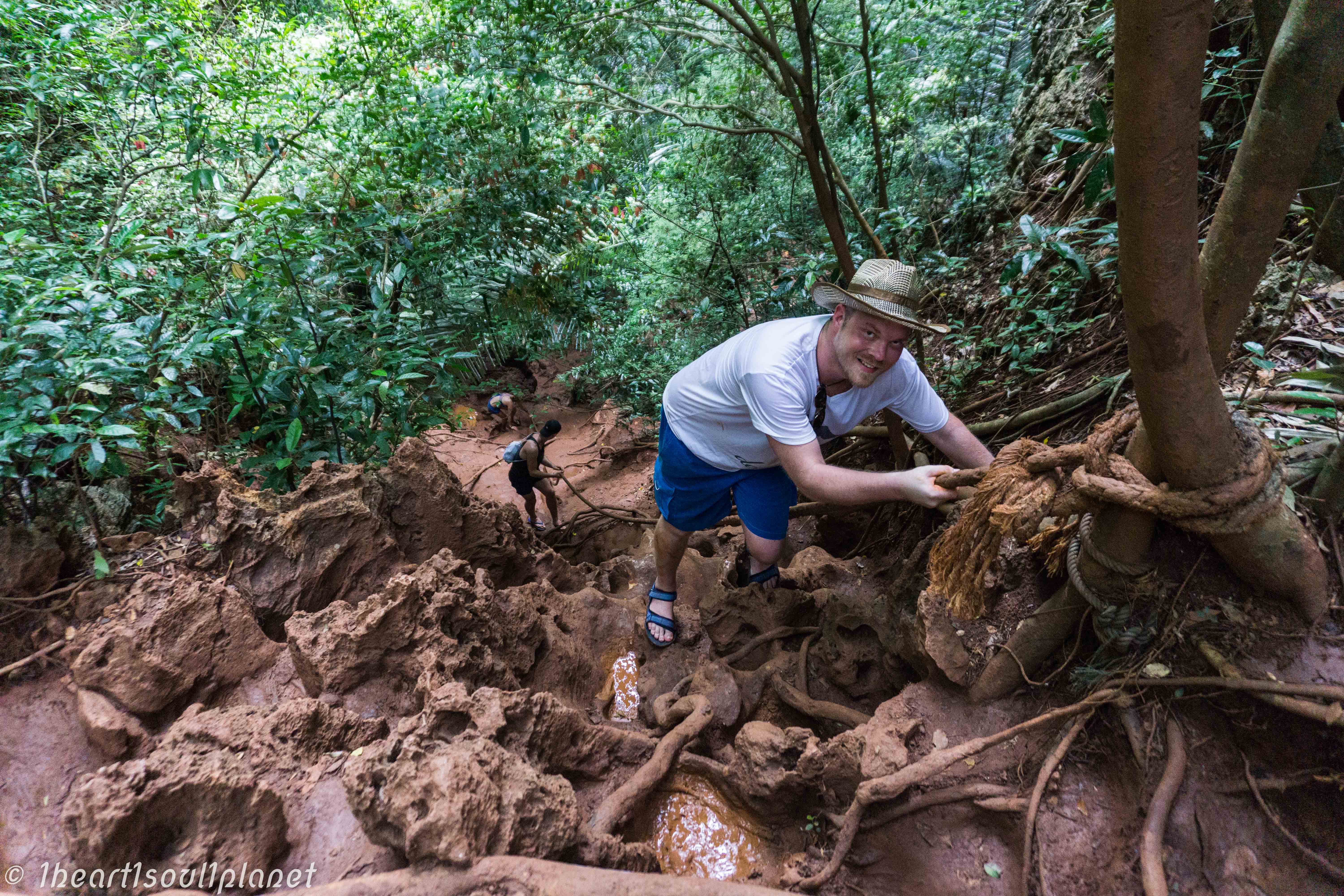 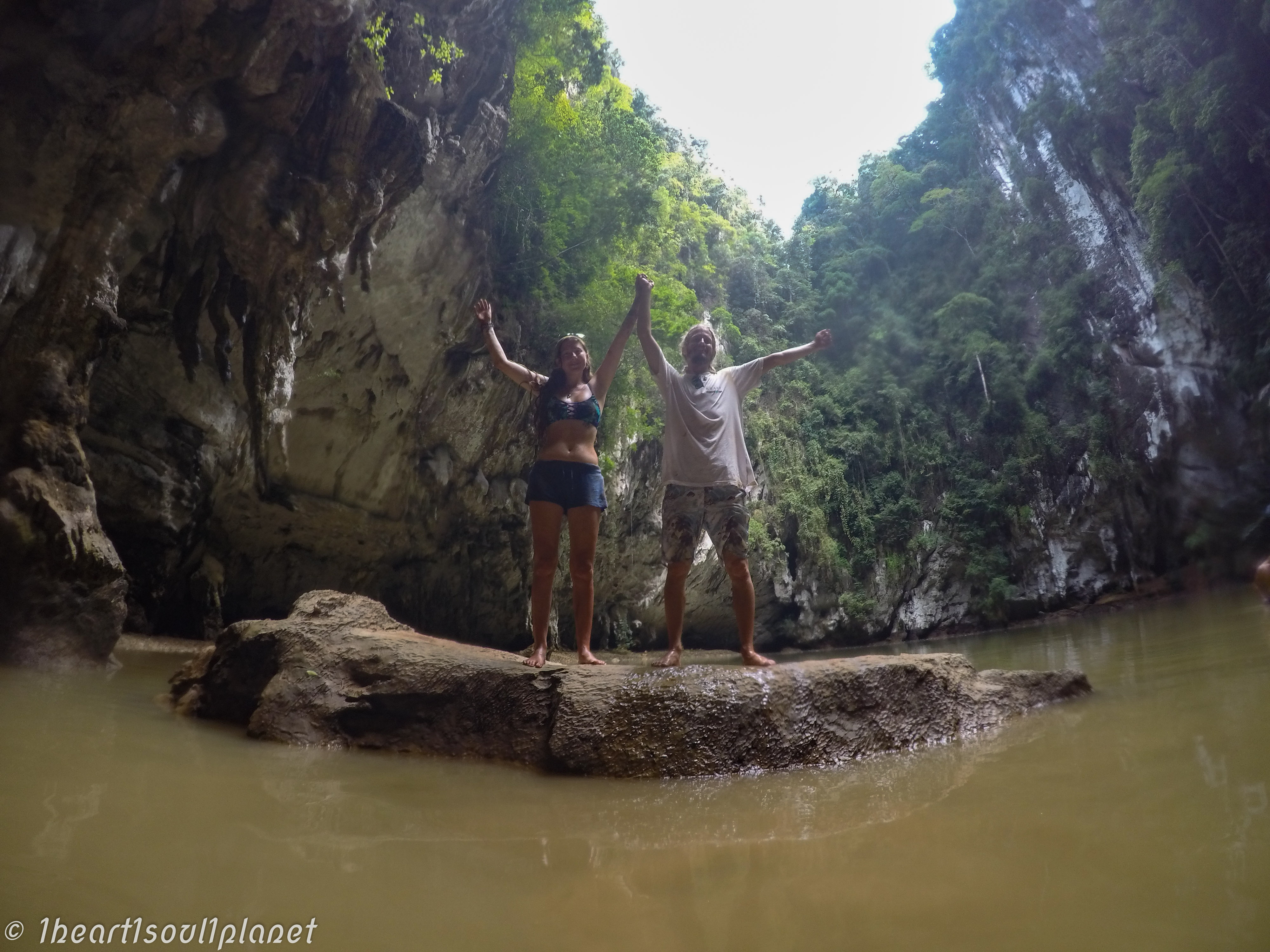 Afterwards, we washed off the mud in the sea and enjoyed vegan milkshakes and the last sunrays of the day.

Shortly before the sunset, we took a longtail back to Aonang beach, where we then stayed to watch the sunset. 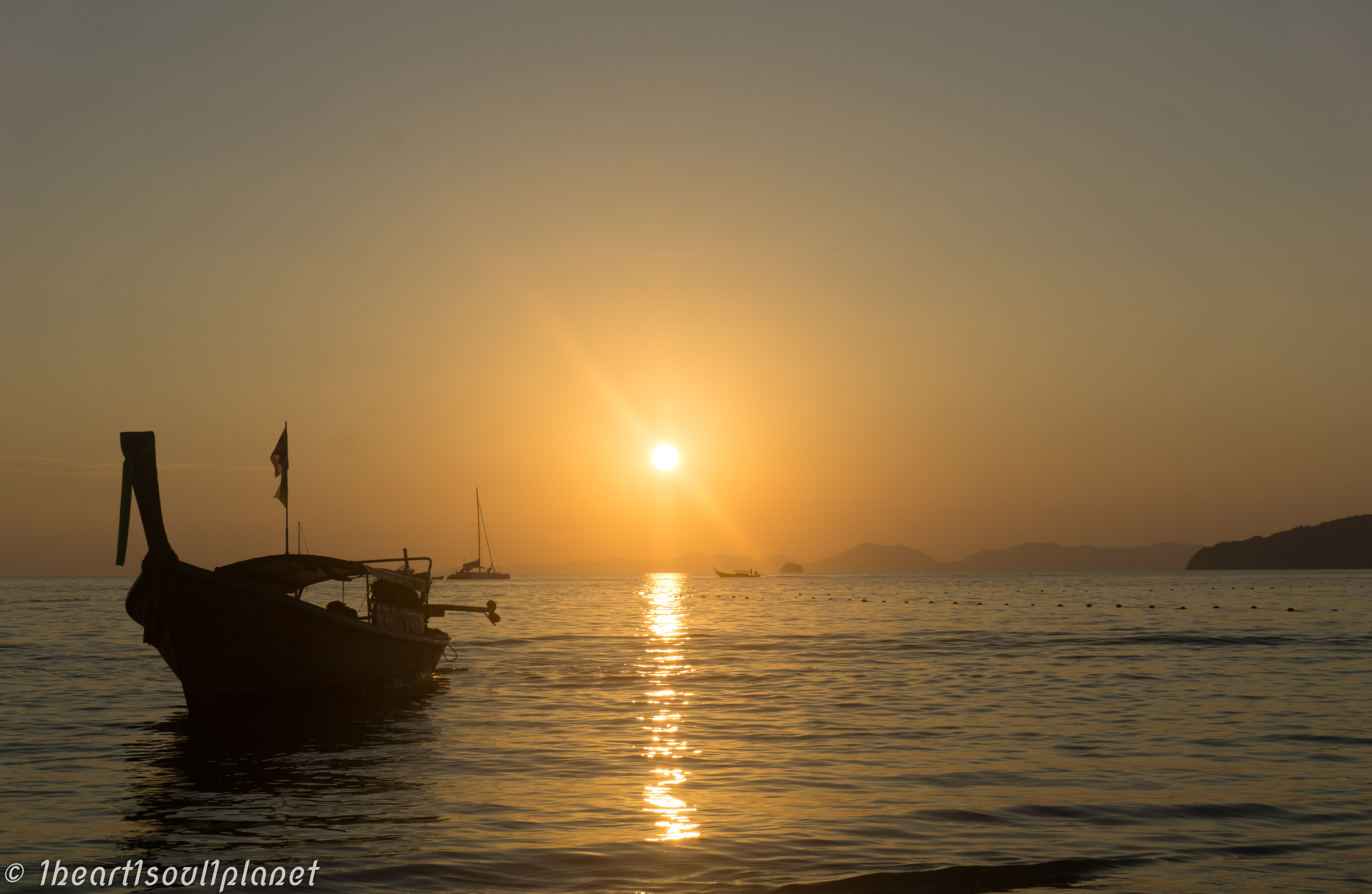 It was a perfect day and a perfect end of our Thailand trip.

A bus then brought us to Bangkok, where we stayed two nights in the nice Hidden Lumpu Guesthouse. 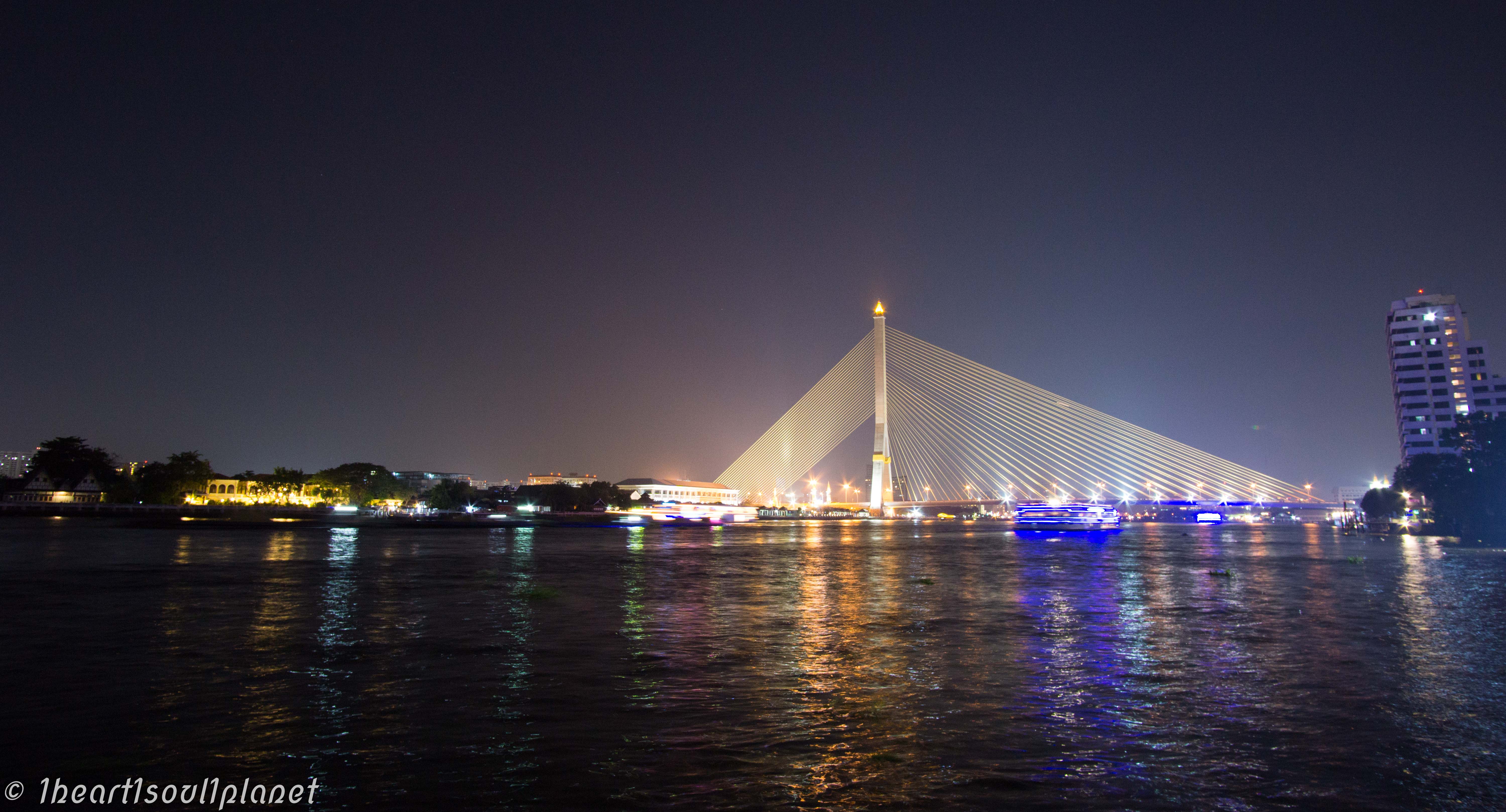 Here, Nici stilled her sugar cravings with delicious vegan pancakes from Mango restaurant. We also enjoyed our last bites of Thai food and got everything we needed for the Vietnam Visa, before Air Asia brought us to Ho Chi Minh City…