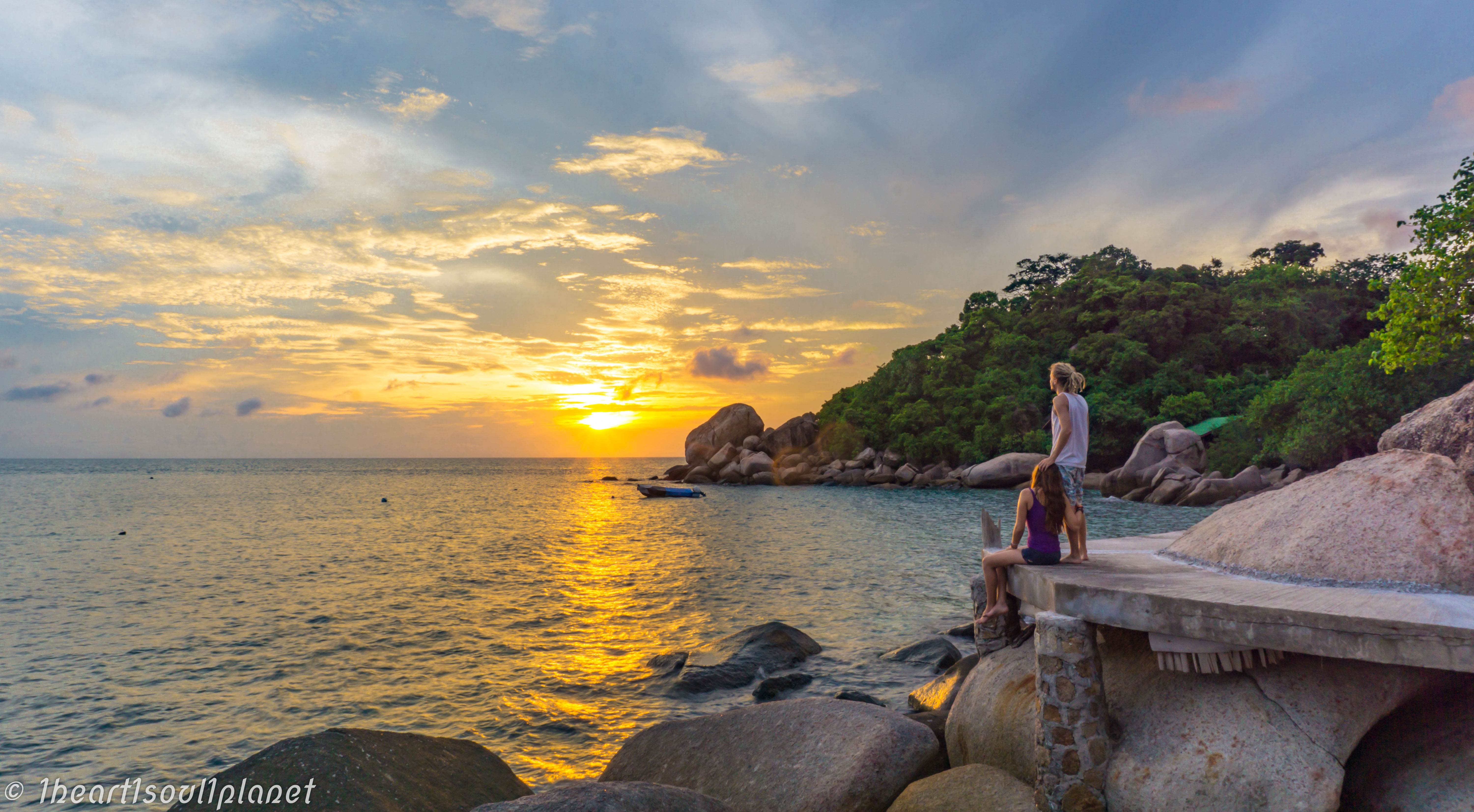 We remembered why we love Thailand, as soon as we went through immigration at the airport in Bangkok. The officer who gave us the stamps was extremely friendly and his good mood was contagious.

We treated ourselves to a hotel far away from Khao San road, where we heard absolutely nothing at night- apart from the sound of our fan.
Since food was one of the main reasons for us to come to Thailand, the first night was a bit disappointing.
We ordered a papaya salad in a restaurant near our hotel… and there were dried shrimps in it :-( Nici mistook one for a piece of tomato and ate it! And now she doesn’t understand why people eat something like that voluntarily. 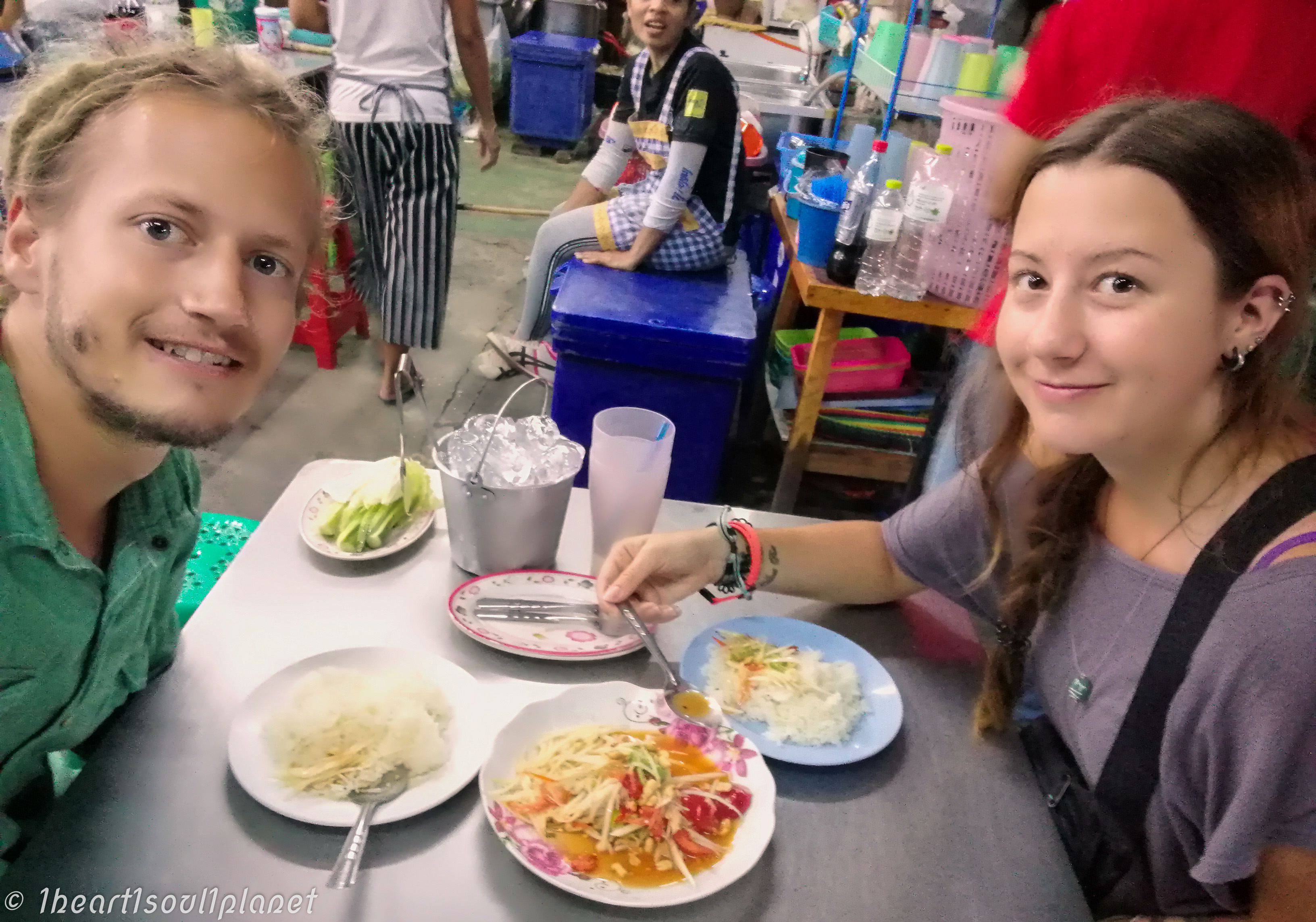 Anyway, the rest of the shrimps landed in a napkin and the next day, we were luckier.
We found a vegetarian restaurant (one of many in Bangkok) and took an Uber there.
The restaurant was close to the train station, so we bought our tickets for Koh Tao before having lunch. The food was amazing! They had a whole menu with meat substitutes, such as mockpork, mockchicken, mockfish etc. Every “normal” Thai meal was available with mockmeat. Needless to say, we were delighted :)
(…and for those wondering why people need meat substitutes: most people choose to skip meat for ethical and environmental reasons, not because they don’t like it. So, when there’s a chance to enjoy a piece of “meat”, for which no one had to die, why not? It’s tasty and other than real meat, it doesn’t harm anybody.)

The rest of the day was spent in our room, with the fan and Netflix on, because we had great wifi. Also, we’ve already seen Bangkok several times, so no need for sightseeing.
For dinner, we took an Uber again to another nice vegetarian restaurant, with a very wide selection of mockmeat.
Nici was again a bit unlucky, because she chose a Massaman curry and it tasted nothing like Massaman curries usually do. It wasn’t very good, honestly. But René’s food was great, so we assume that it’s actually quite a good restaurant.
The next day, we had to check out before noon, but our train was going to depart in the evening. We found a place to store our bags and then we went back to the vegetarian restaurant from before, but unfortunately, it was closed. Soon enough, we got hangry and Nici couldn’t walk well with her hurting foot, so we took a taxi to Khao San road nevertheless and had lunch in May Kaidee’s vegetarian restaurant, which lies next to the hostel, where we stayed two years ago. 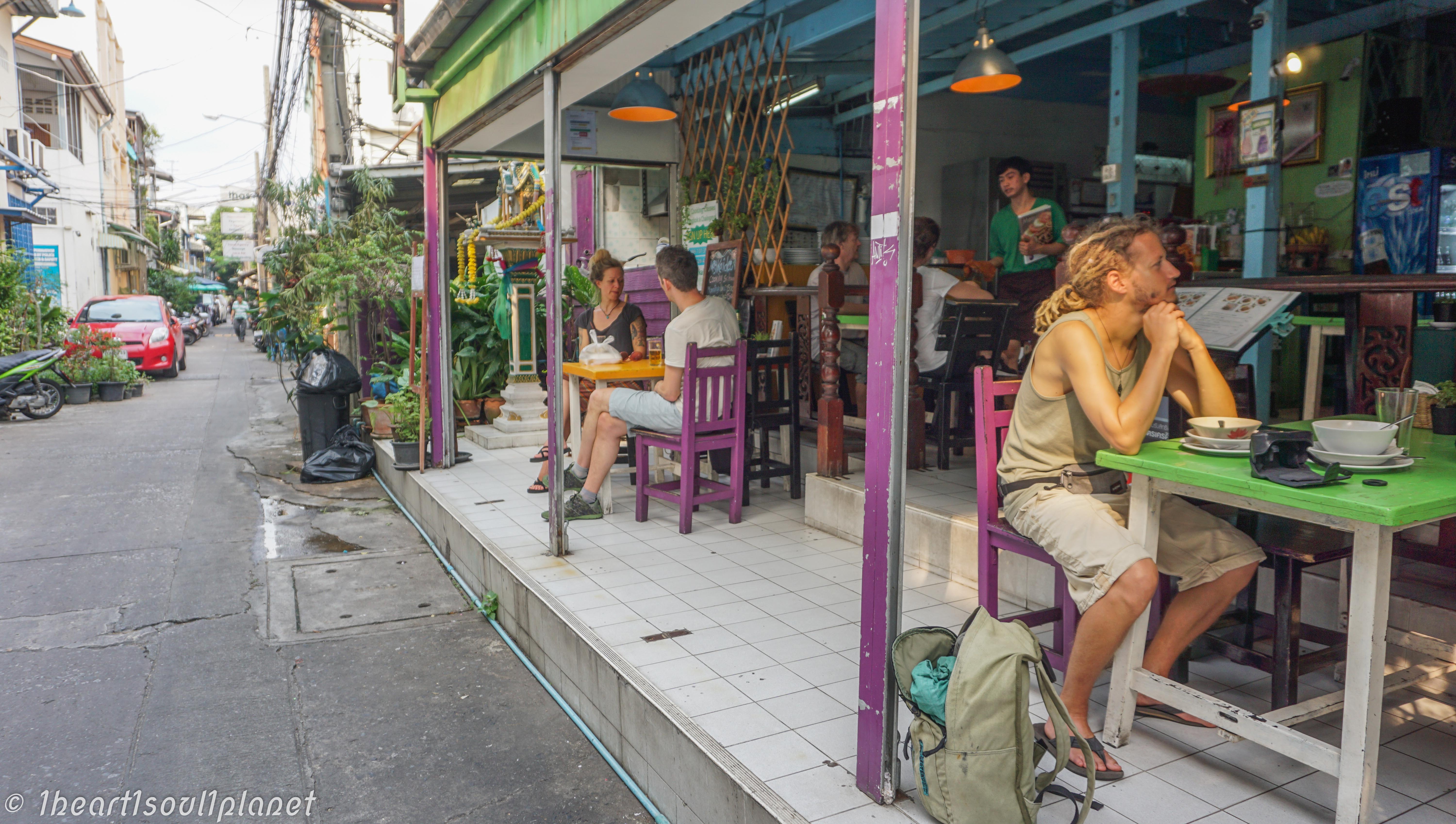 The food is still as great as then and we were quite stuffed, when we took a taxi back to the train station.
There, we watched a movie on our laptop and went to get dinner to go before boarding our train at 6.30 pm. 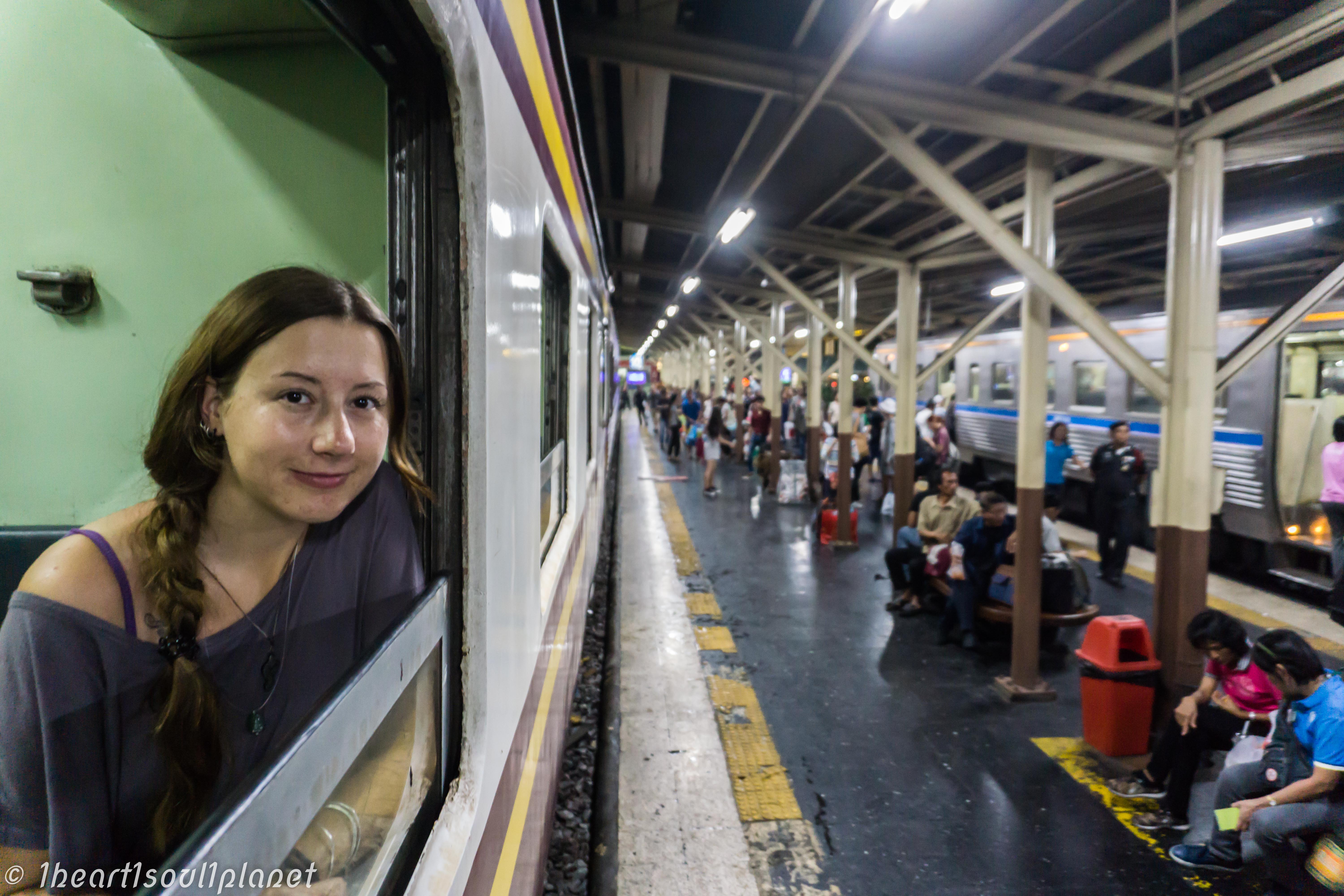 Even though the train was extremely comfortable, we both couldn’t sleep and when we arrived in Chumphon at 5am, we were quite tired. When we ordered a black tea in a café, we got a coffee instead, but at least that managed to wake us up.
The bus was on time and brought us to the ferry.
It always amazes us how well everything functions, when we’re in touristic areas. We’re used to places where tourists usually don’t go, but despite being a bit annoyed by all those weird people around us, we were glad that everything was marked clearly and every mode of transportation was on time.
The speed boat brought us to our beloved island and we were glad to be home.

There was one problem though: Nici’s foot was really bad and René had to carry both big backpacks. We miscalculated the way to our hotel and decided to walk, because the cabs seemed to be way too expensive. The thing is, the 1,6 kilometers we’d thought we had to walk, were a shortcut through the forest that’s only accessible by foot. The main road, however, was more than 10 kilometers- and it went up a steep mountain.
Soaked in sweat and hangry, we stopped in the middle of the mountain and got lucky. A local picked us up with his pick-up and drove us to the Tao Thong villa.
We then walked down to the beach, looking for the reception, but realized soon enough we were in the wrong Tao Thong villa. We had booked a bungalow in Tao Thong villa 2.
Nici couldn’t walk anymore, so René went to check it out first.
We must say: the area was absolutely beautiful! 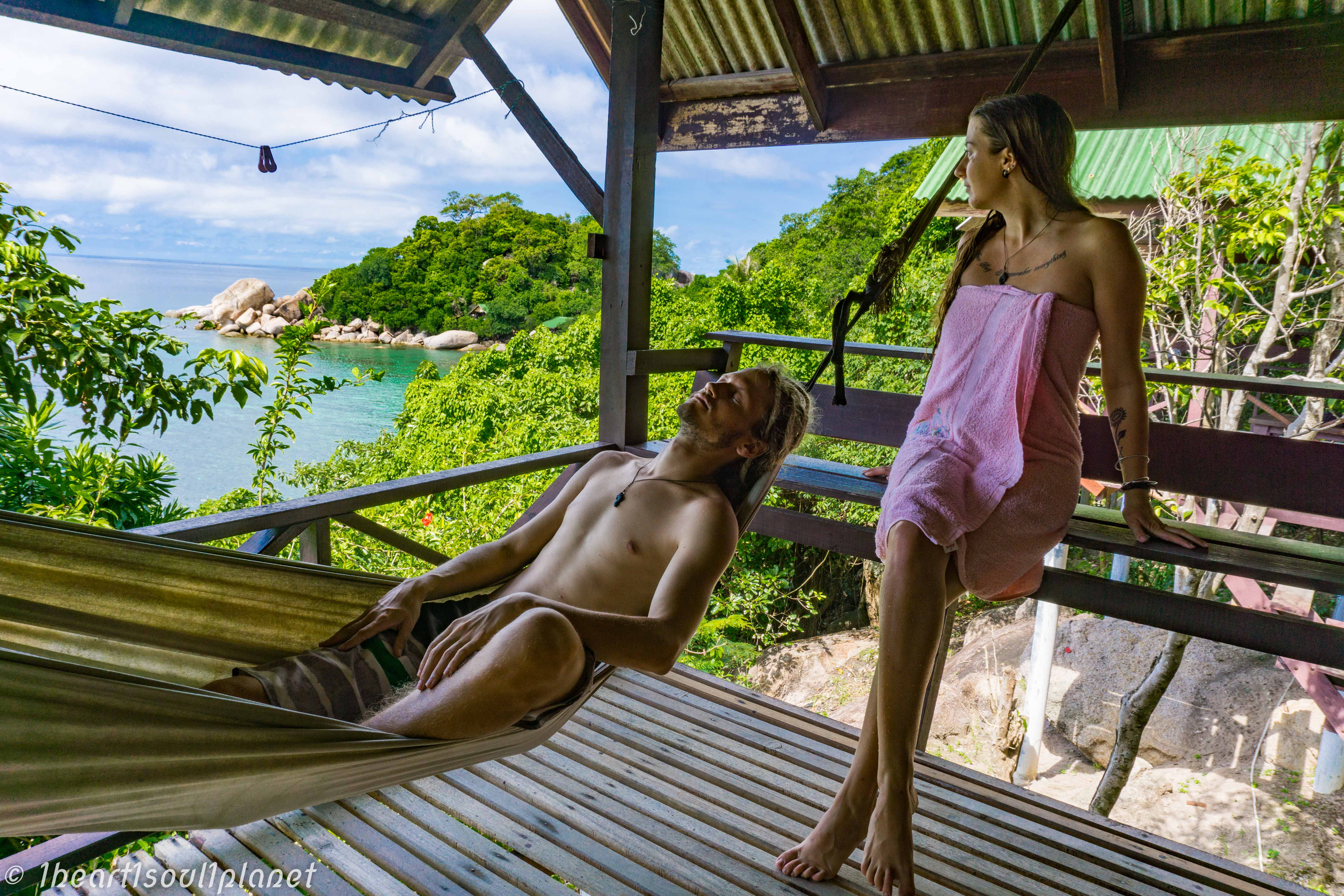 And yet, we regretted having booked two whole weeks there, because with an injured foot, it looked like a bad place to stay.
The nice woman at the reception said that changing the booking was no problem, but she recommended us to get a motor bike and she also gave Nici a cream for the foot.
So… Poor René walked thirty minutes back to town to get a motor bike, but he got a good deal and got a new model with good tires for 150 baht per day. We called her Eleven, because that was her number.
The first time we had to drive over the mountain, was extremely scary. It seemed very high and the road looked bad, but we managed and soon enough, we enjoyed lunch in La Carotte qui rit, our favorite restaurant, from when we were here in 2015.
The food was still absolutely delicious, but way more filling than we remembered.
By the time we got back, the sun was already setting and we missed what could have been the most beautiful sunset of our lives. The way the setting sun reflected off the ocean was prettier, than anything we’d seen before. It was a mixture between an Indian and a Sri Lankan sunset, the sun was a huge, orange ball but you could see it all the while until it was completely gone. In India, it usually disappears behind the smog before it reaches the horizon.
Anyway, we saw the sunset from time to time through the palm trees, while driving back over the mountain, but by the time we reached the bungalow and had our camera out, the sun was gone.
Luckily though, it wasn’t over completely and we managed to take this beautiful shot: 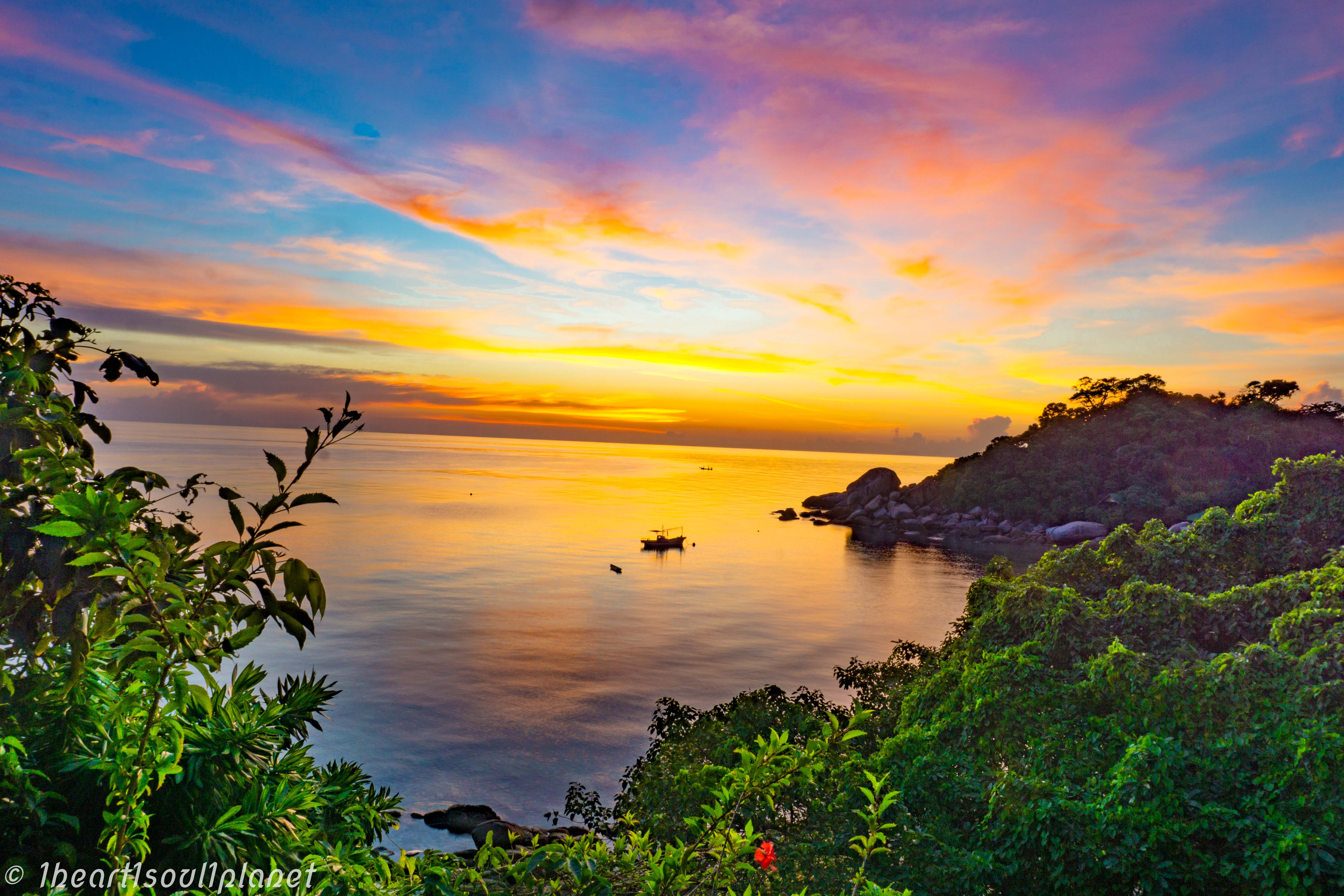 It was also an incredibly clear night, so René was really excited and went out to take pictures of the milky way: 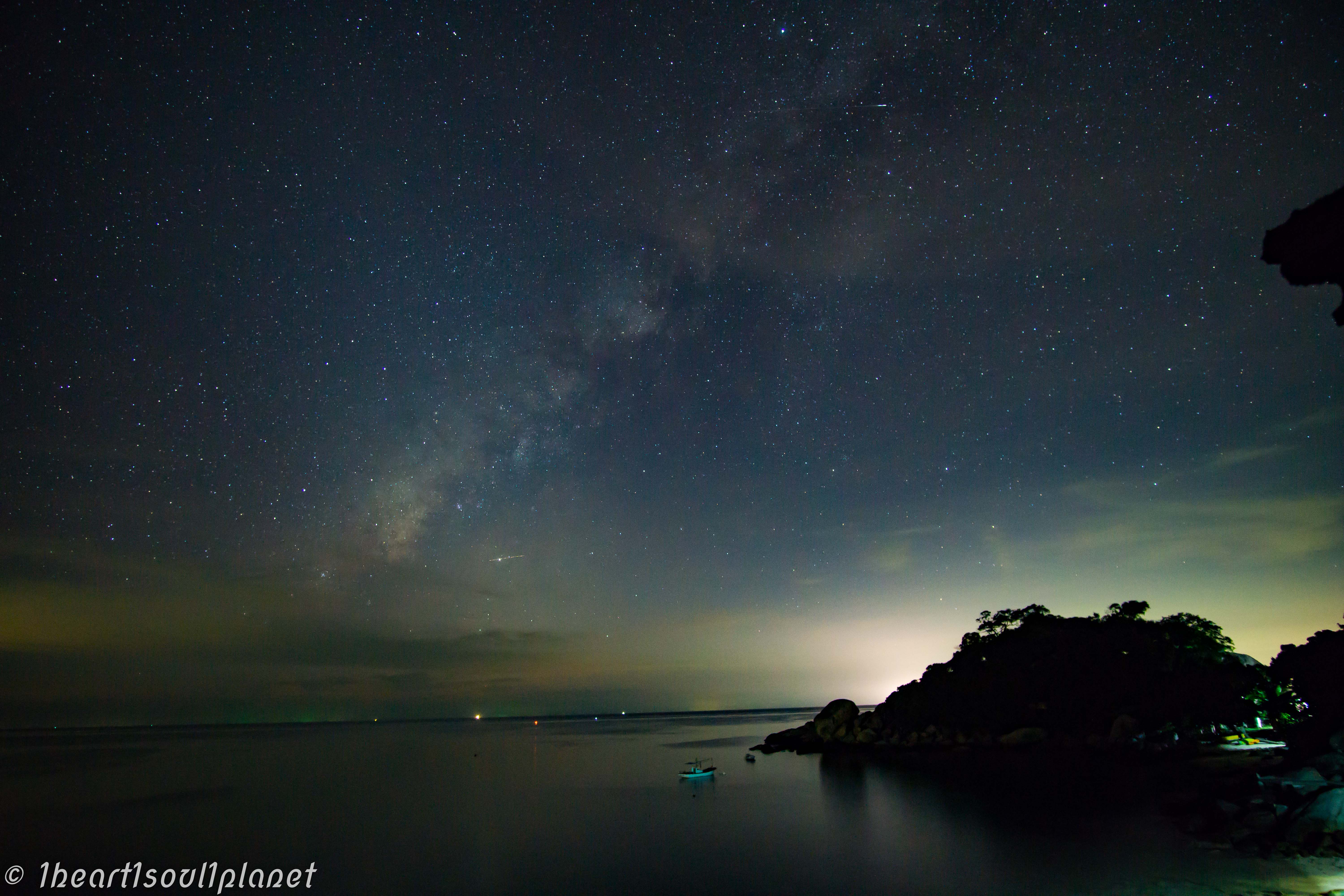 Because the mountain seemed so dangerous, especially at dark, we wanted to drive over it as little as possible, so we often ate dinner at the Tao Thong villa. That wasn’t bad either, because they also served all their meals with tofu upon request and the food was delicious.
We enjoyed our meals while sitting on a wooden platform, overlooking the ocean. It was truly a paradise and the first five days were sunny as well. 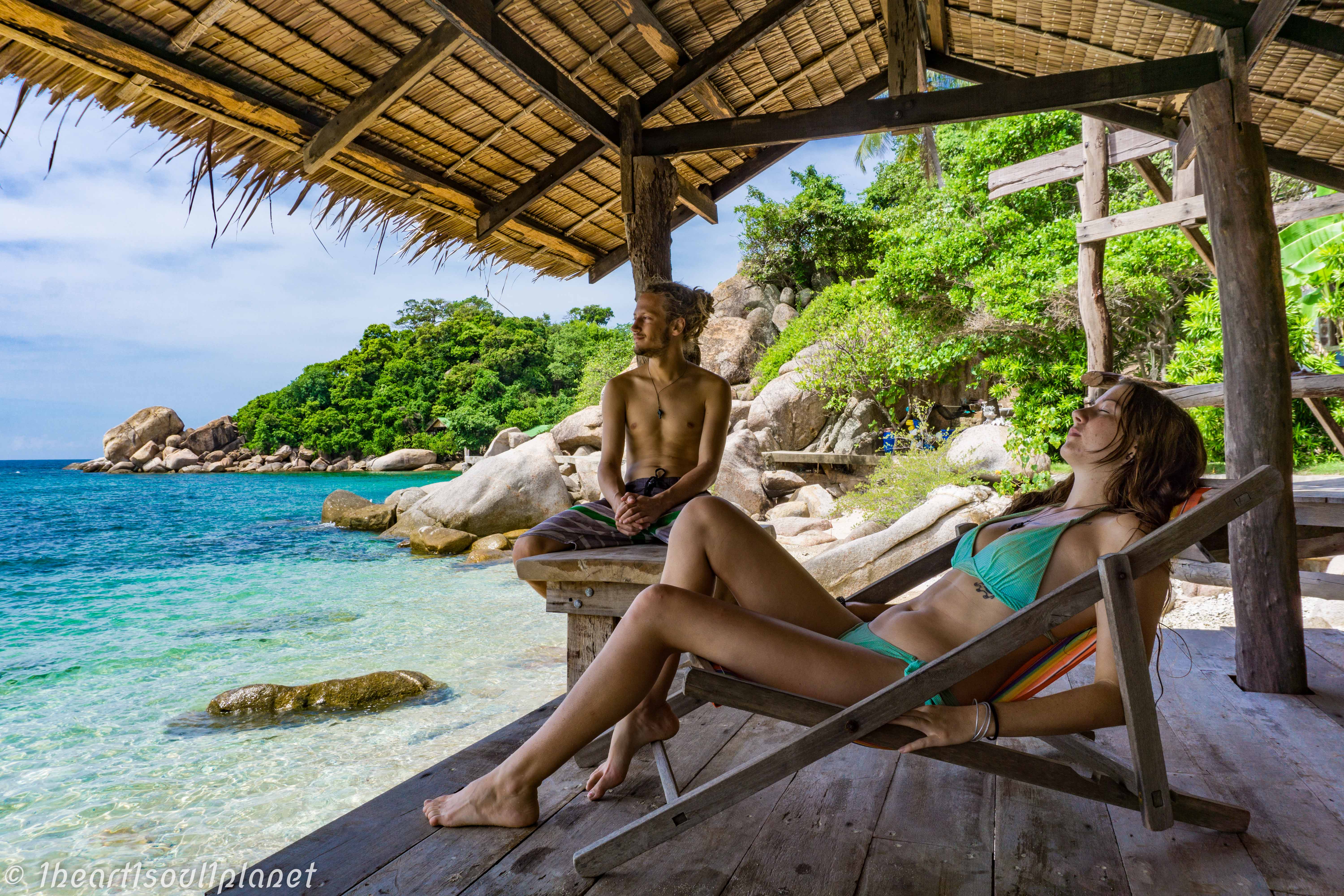 René discovered a restaurant, which is famous for their vegan meals, and it was quite close to where we were staying, so we also went there to eat. It’s called Babaloo and it, too, offered lots of mockmeat and Nici found out that she especially loves mockchicken, whereas René prefers mockduck.

Soon enough though, we realized that prices were higher than we remembered, so we started eating at Yang’s more often.
Yang’s was the place, where we and our friends always went to eat back in 2015. (We used to call it Cheeky Yang’s). They serve very cheap, very tasty food, both Thai and western and everything is available with tofu as well. There’s a tofu burger and a tofu schnitzel for instance, and they also offer free water. The place is extremely popular and usually quite full, but the cooks are really fast and you never have to wait long.
Since Nici’s a creature of habit, she ate the fried mushroom with tofu about almost every single day, while René tried out different dishes and had the tofu schnitzel for the first (but not last) time. 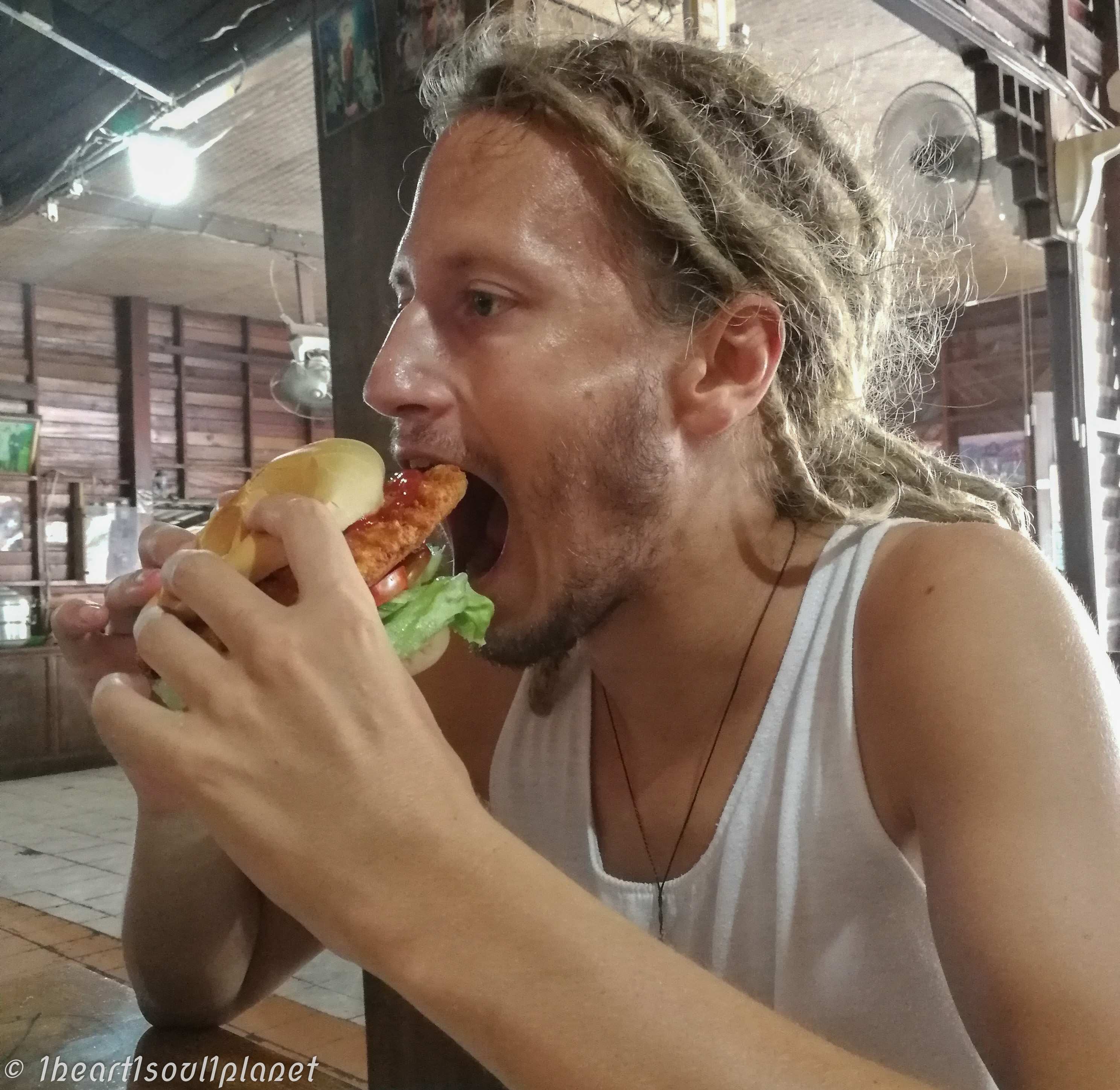 René also went diving a couple of times at the simple life divers. That’s where he took his divemaster course two years ago and now he gets a generous discount on fun-dives.

Because of Nici’s foot, we couldn’t walk around and explore the island, but it wasn’t so bad because we already know it quite well and we were happy enough just spending our days on the beach, snorkeling, sunbathing, reading, writing and watching Netflix. 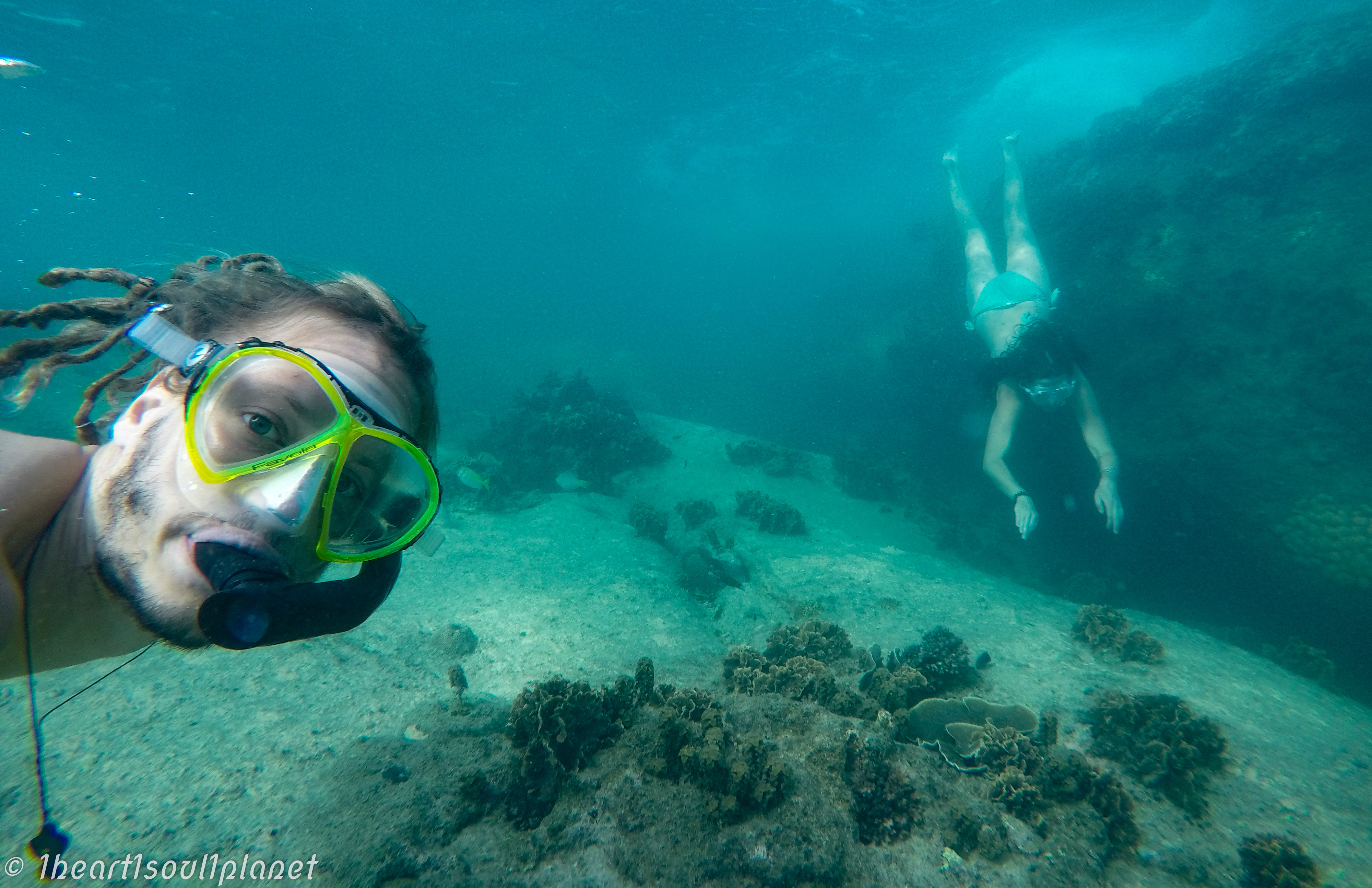 When the foot got worse instead of better, Nici decided to see a doctor and he gave her pills and a cream. The pills worked very well and the pain and swelling disappeared after a couple of days.
Hence, we were ready to explore.
There wasn’t much walking though, because we thought it would be better to leave out the viewpoints, where actual hiking or climbing was required.
The one we visited, was motor bike accessible and we celebrated our one-year-worldtrip-anniversary with a good beer before taking a couple of pictures. 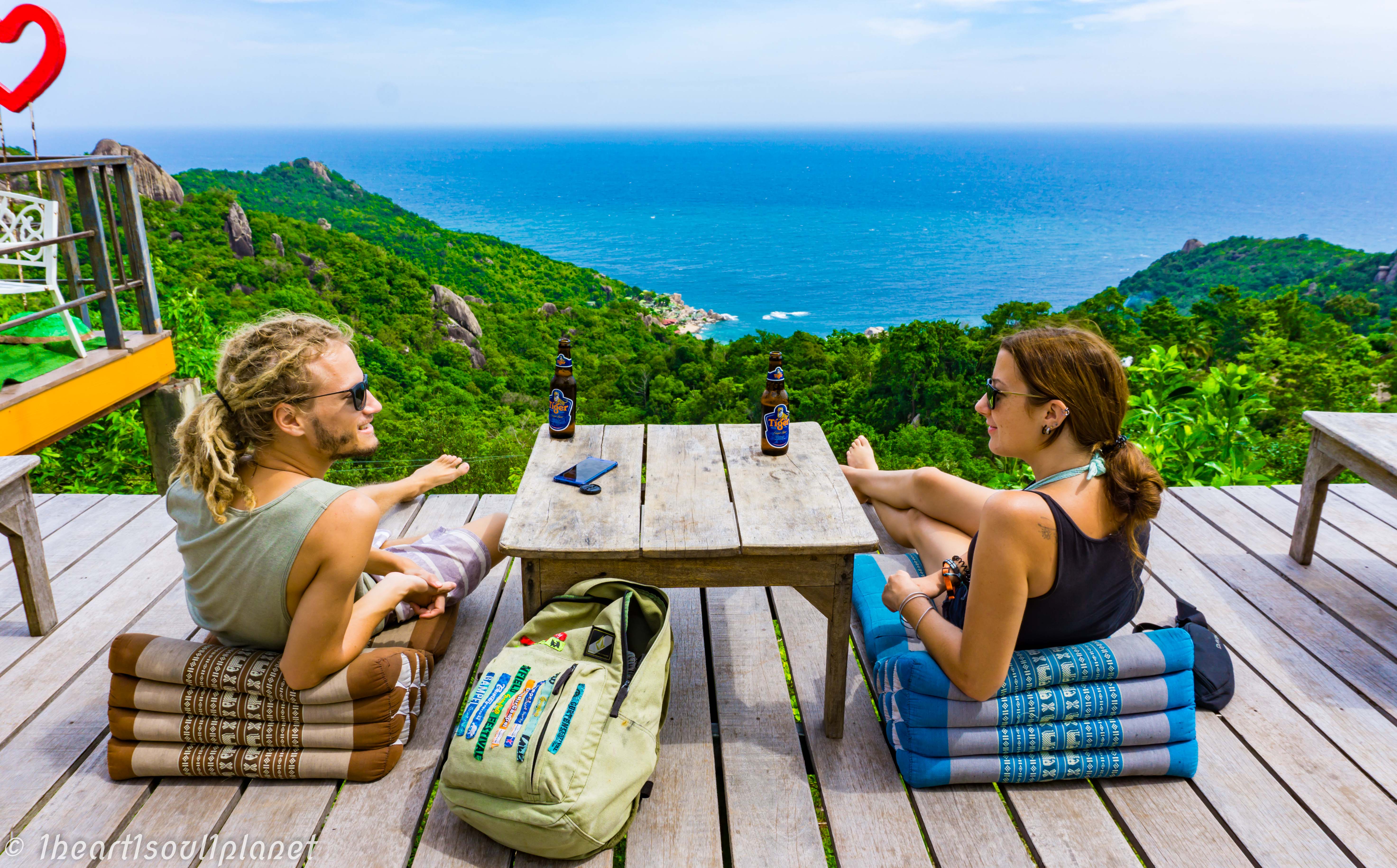 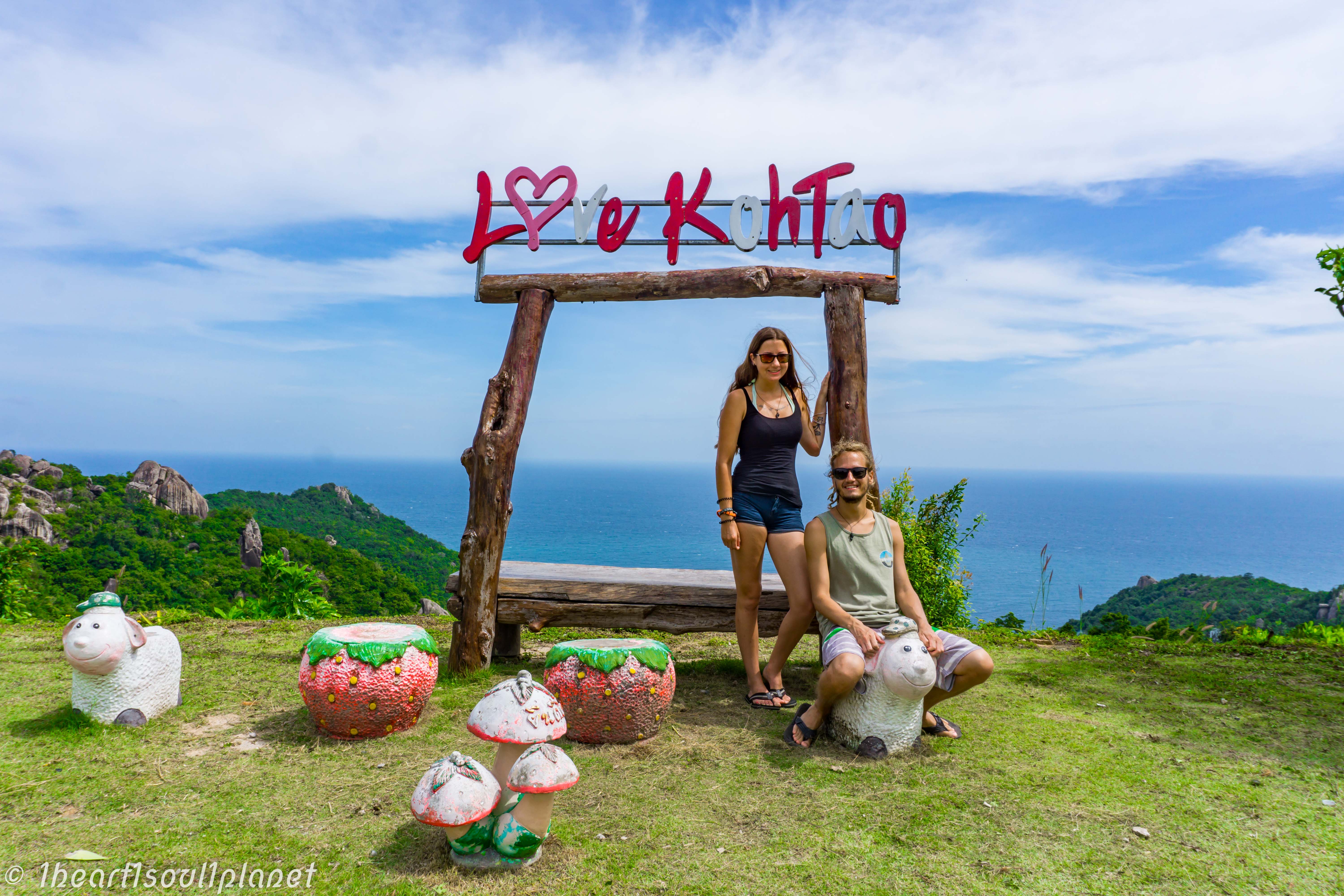 We also made a friend in the Tao Thong villa 2, and with him, we enjoyed more beer and watched the fire show in our favorite bar: the rock (which is now called Leo bar). 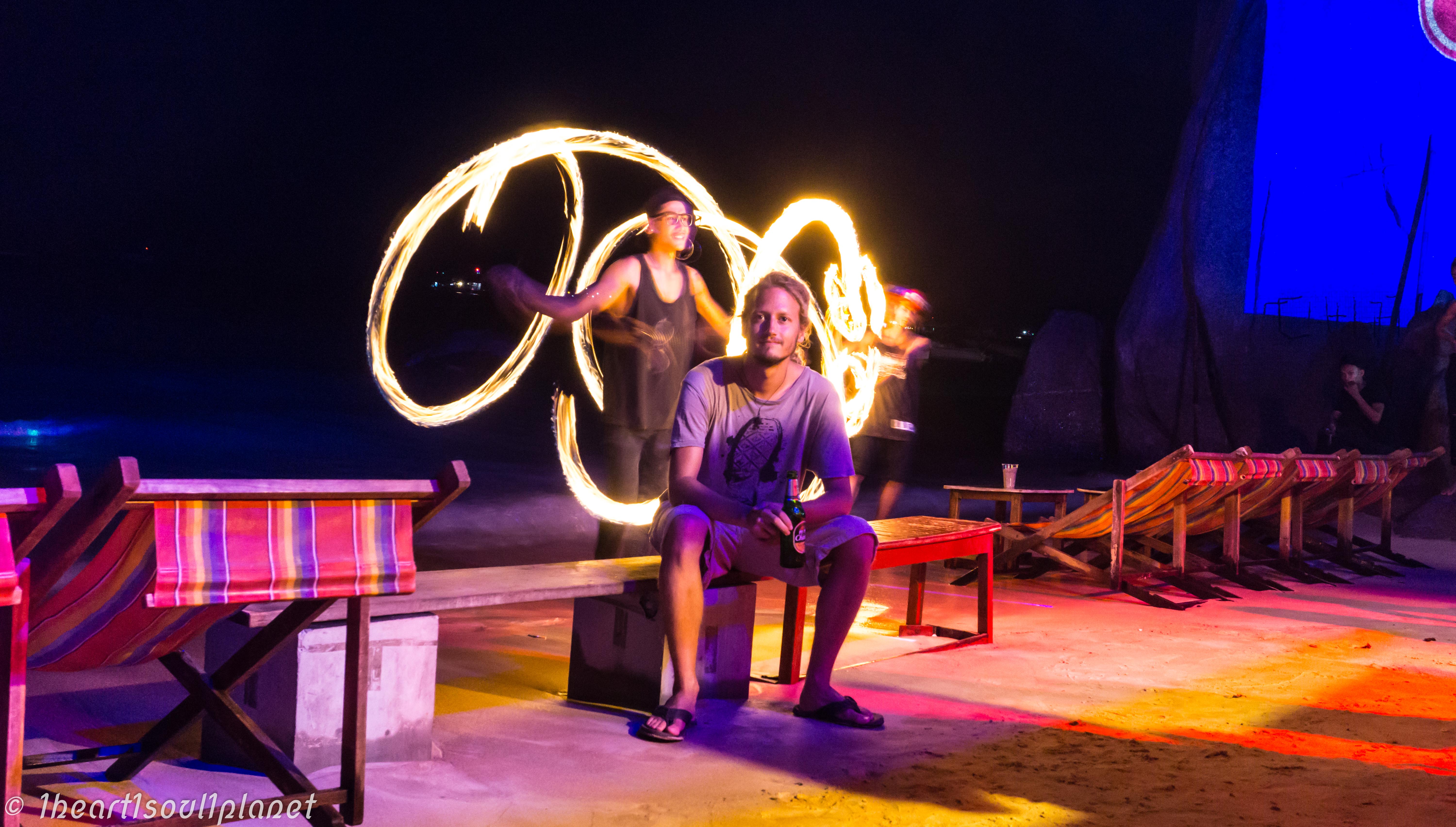 Oh, by the way, we loved Tao Thong villa 2 so much, we ended up staying two whole weeks nonetheless. Even driving our bike over the mountain became thrilling and fun. We actually considered spending a whole month on Koh Tao, but then the weather got bad and we decided to leave and see something else.

Choosing where to go wasn’t that easy… but one of Nici’s school friends was going to be on Koh Lanta, so we decided to go there as well… though saying our goodbyes to Koh Tao was heartbreaking :(