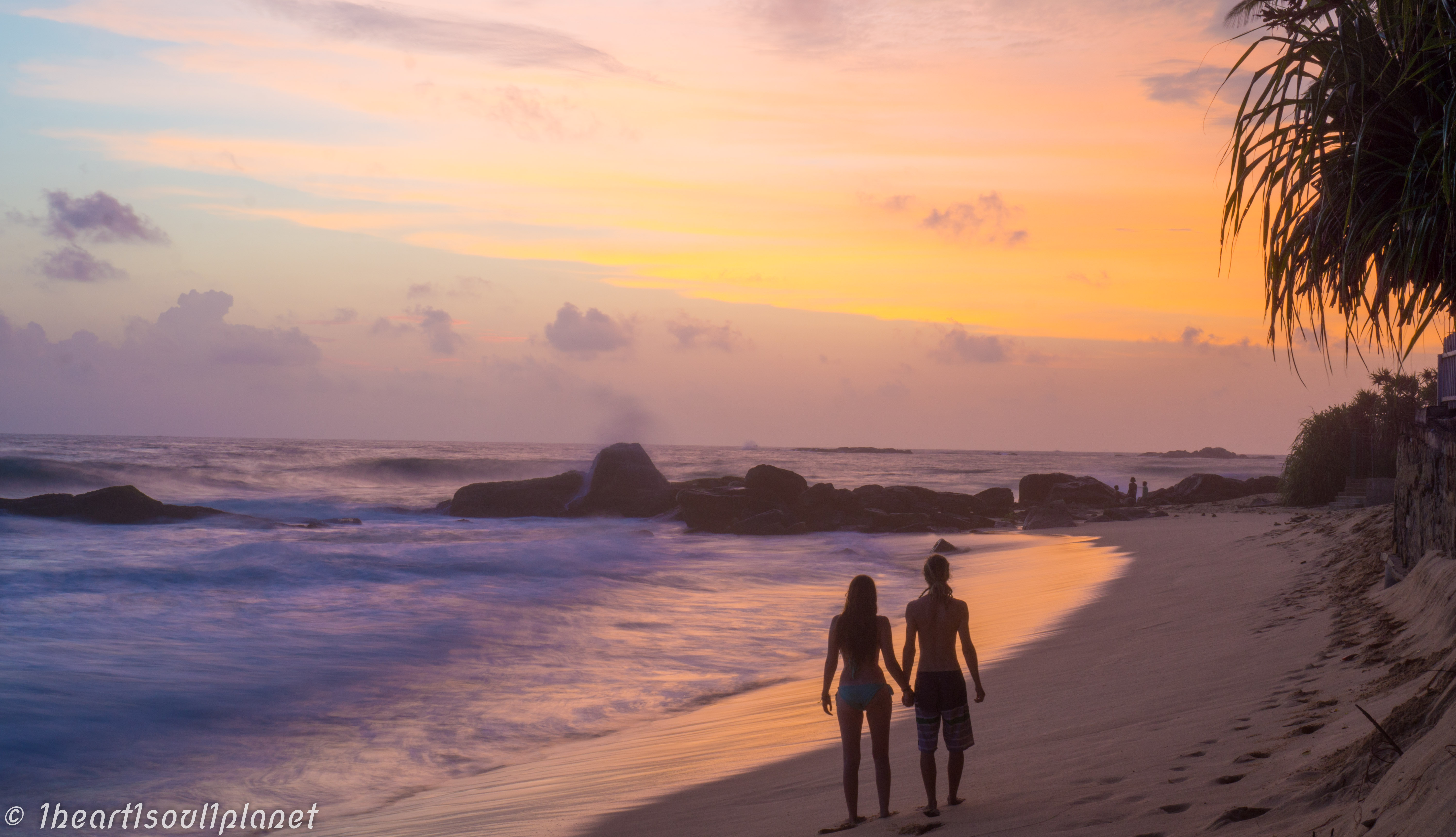 We reached Colombo in the evening and its airport struck us as quite welcoming and easy to get through.
Receiving our previously booked electronic visa was no problem, so we got through immigration really fast.
Another nice surprise was, that Uber is allowed to operate near the airport, which gave us a cheap opportunity to reach our guesthouse, about an hour drive away from Colombo airport.
It was already dark and we couldn’t see much from the car window, but our first impression of Sri Lanka was great.
The driver drove safely, the roads were good, not too much traffic and most importantly: not too much honking.

The guesthouse, where we had booked three nights, was also very welcoming. Its owner was friendly and helpful and our room comfortable.
We slept rather long (as always) and got up to get our laundry done at a place nearby. Then, we strolled around until we reached the beach and found a place to eat.

Sri Lanka’s definitely much different than India. The streets even in Colombo weren’t that crowded and no one stared at us in a weird way. Generally, people here seem to like tourists a lot more and that’s shown in the extremely friendly way they treated us. 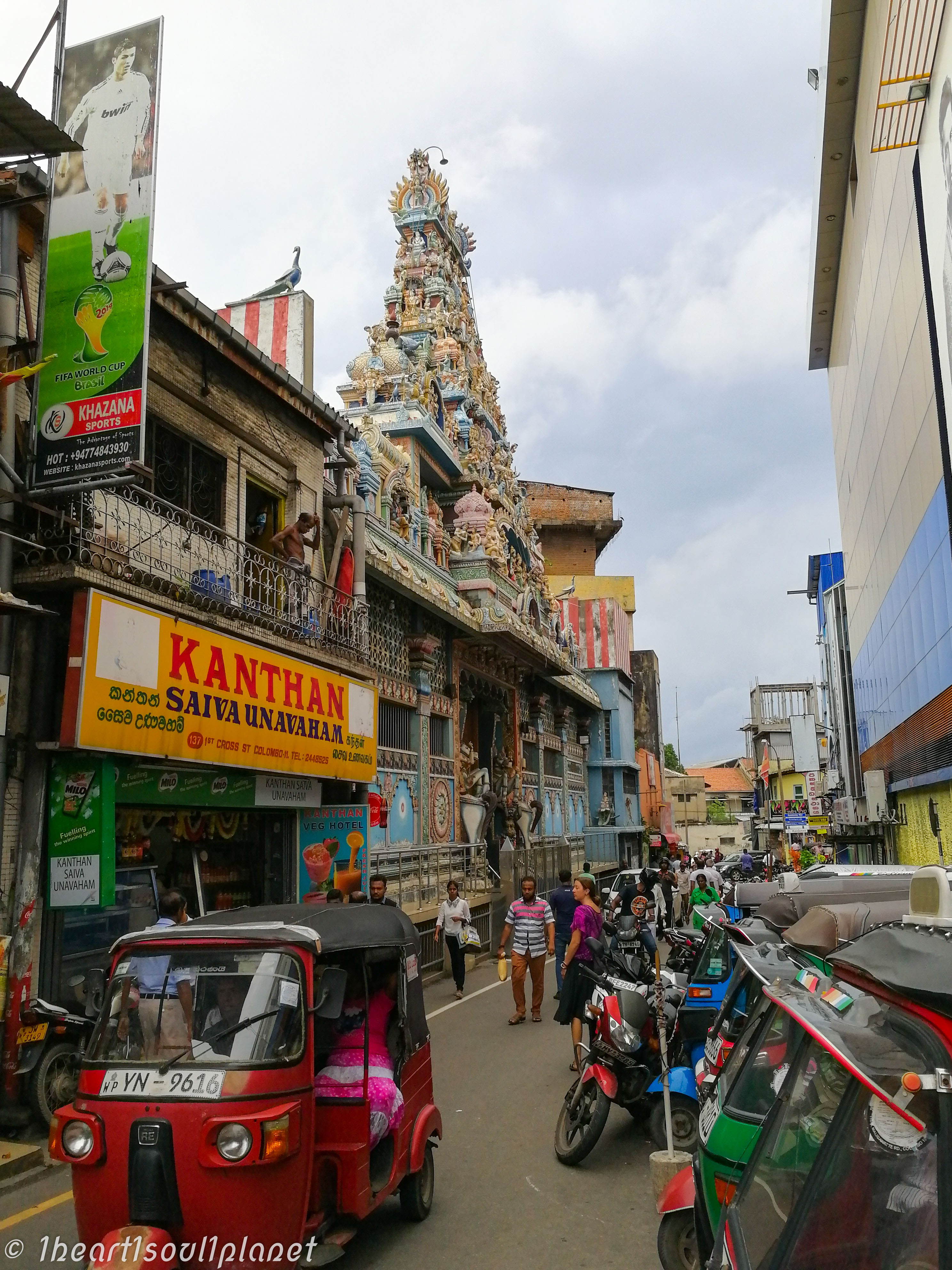 We spent our days in Colombo strolling around to make at least 10’000 steps a day and to get to know our surroundings.
For dinner, we found a nice vegan burger place.

By train from Colombo main station, we then traveled south to Galle.
We had booked a week in the Crazy Coconut Villa near Unawatuna, but it soon became clear that one week was not nearly enough to enjoy this wonderful place… 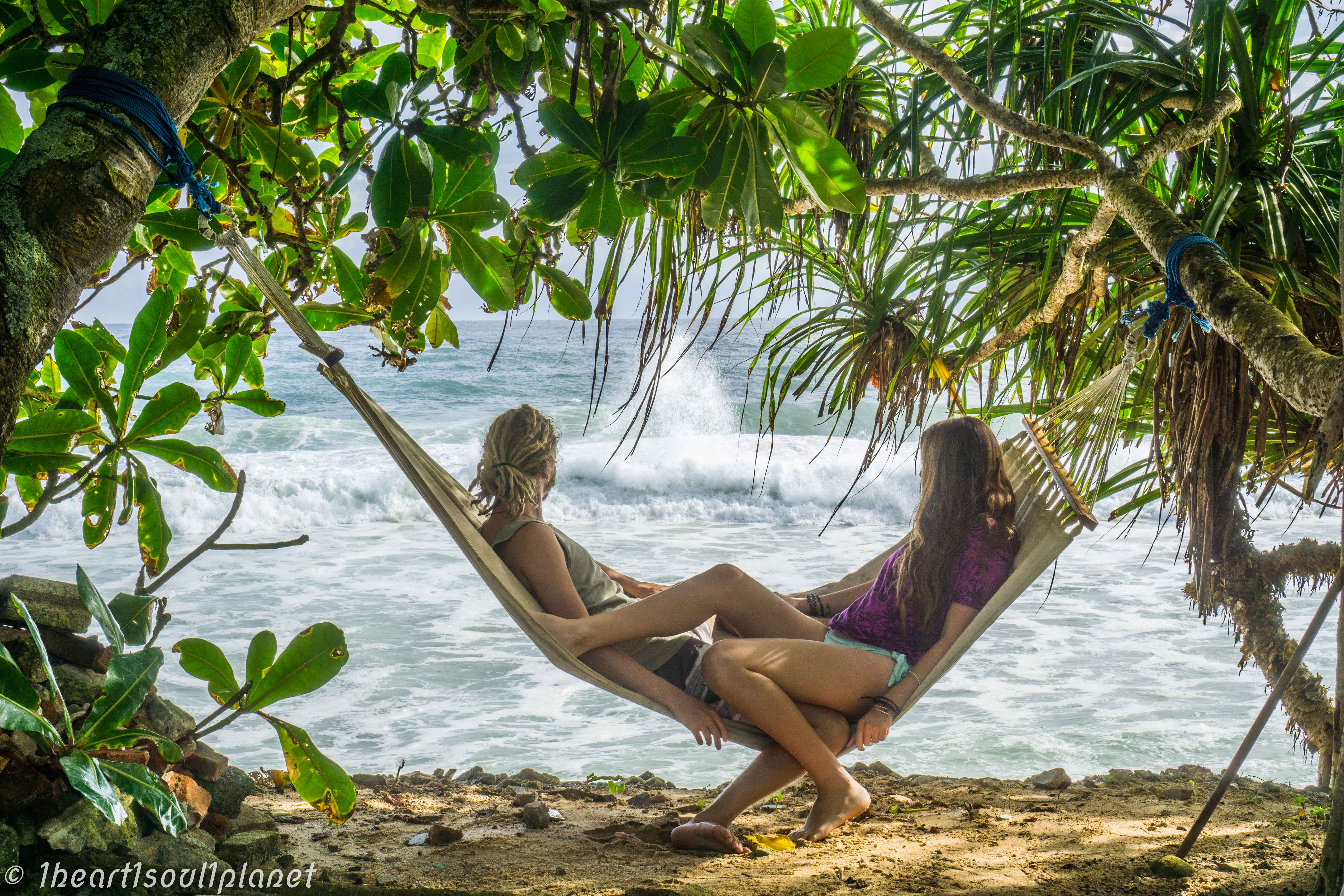 Our room only cost us 15 dollars a night, which is not much considering we had a nice, big bathroom, rather good wifi, a kitchen and most importantly: a beach almost to ourselves.
It was not Unawatuna beach, but one a lot smaller. We didn’t even find out its name, but there were no chairs, no bars, no sun umbrellas, no nothing. 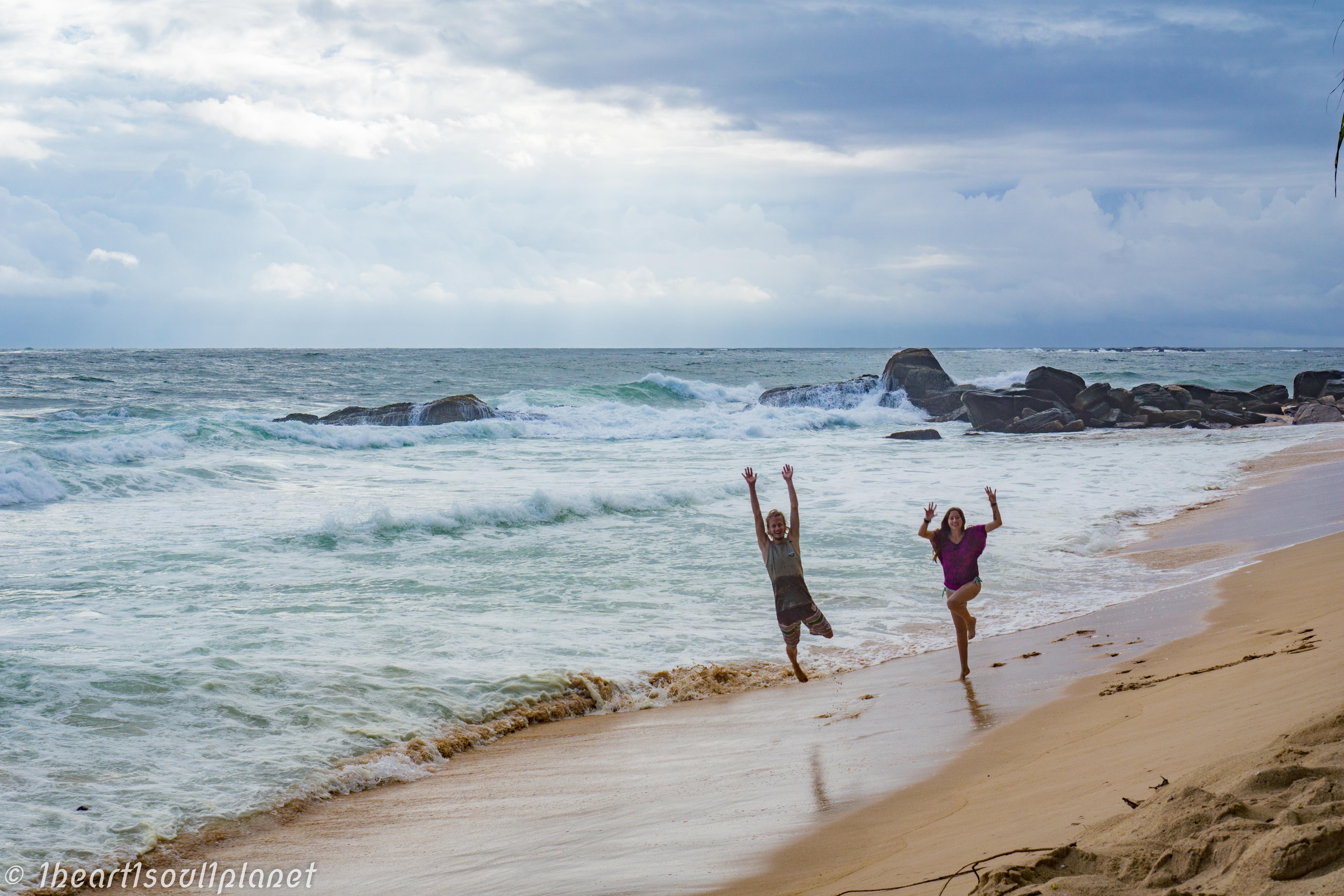 Out hotel provided a couple of chairs a little bit above the beach, so you could enjoy the view.
Apart from locals and people strolling around, we were the only ones there for about two whole weeks :-)

To regain our strength after the rather wearisome journey through Bahrain, we spent a couple of days just lying on the beach and bathing.
Then, we rented a motor bike and drove around to explore the area.

The first trip we made was to visit the tea plantation by Herman teas, which is famous especially for their Virgin White Tea. 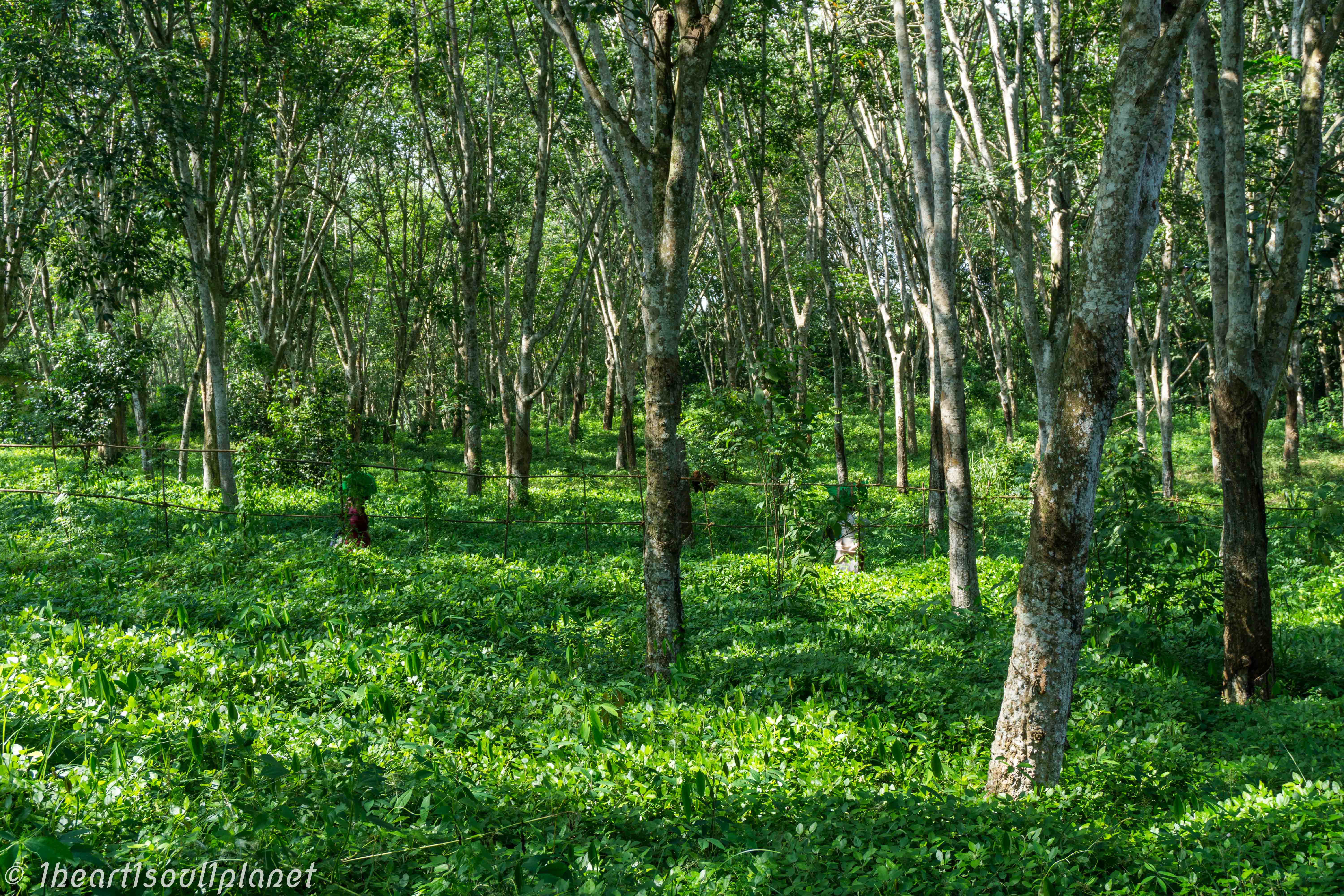 We had not even heard of this tea sort before and were quite intrigued to learn that the tea got its name from China, where in the early days only virgins were allowed to work on the fields.
That has changed, obviously, but still no one is allowed to touch the tea plants with bare hands.
Our guide, who showed us around for free, introduced us to other tea plants as well as coffee and rubber trees. We then got the chance to try all kinds of teas and even got offered a piece of cake. 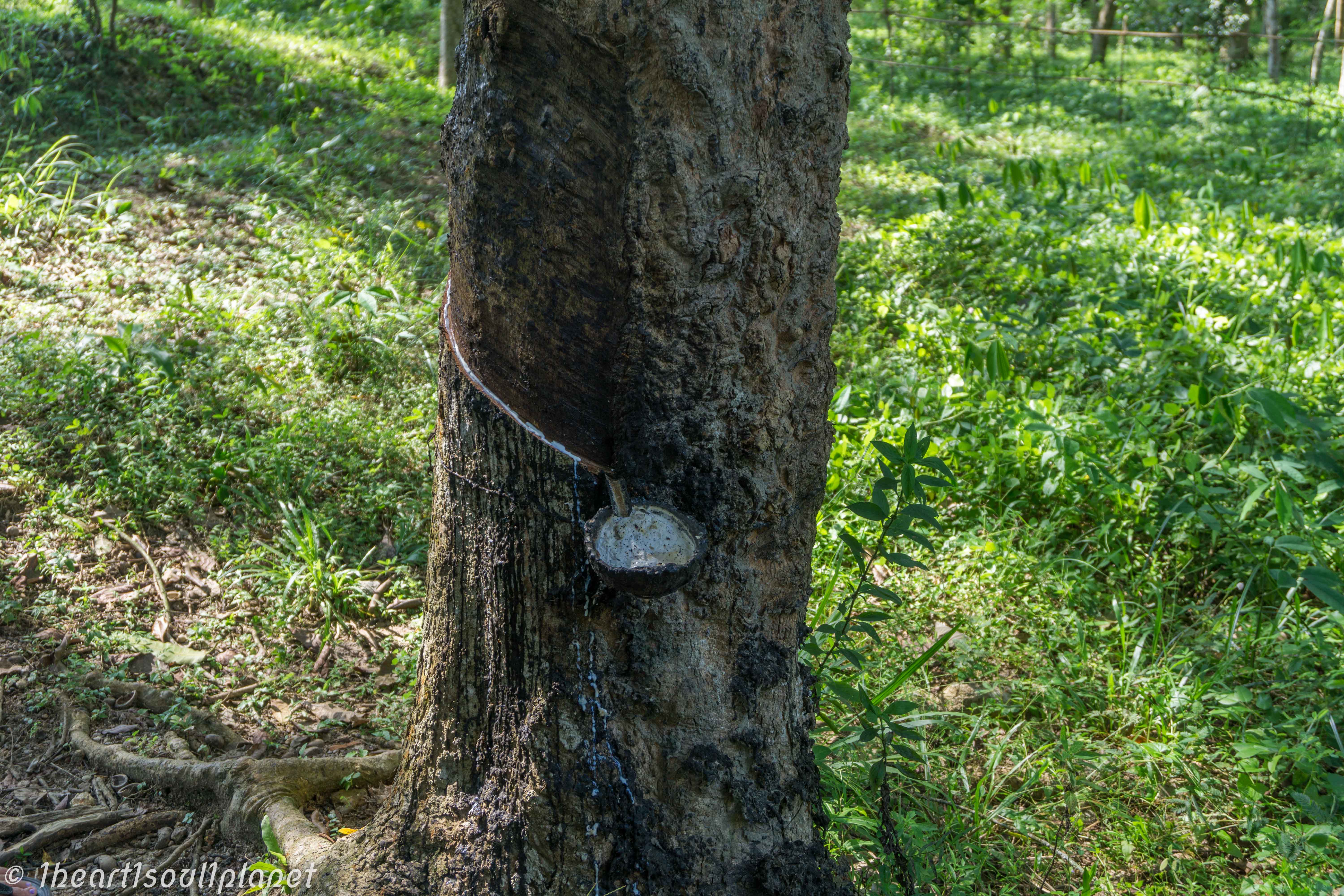 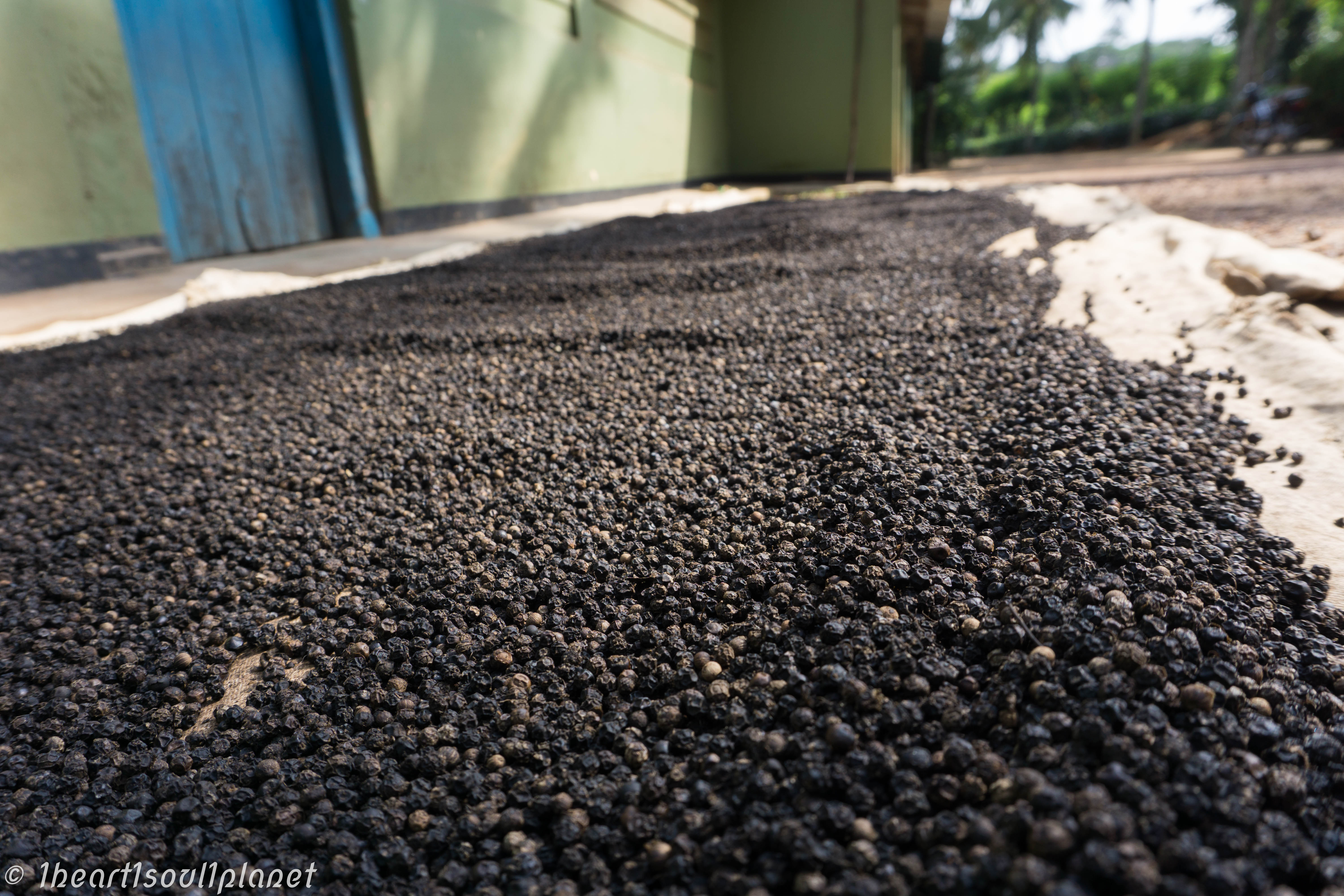 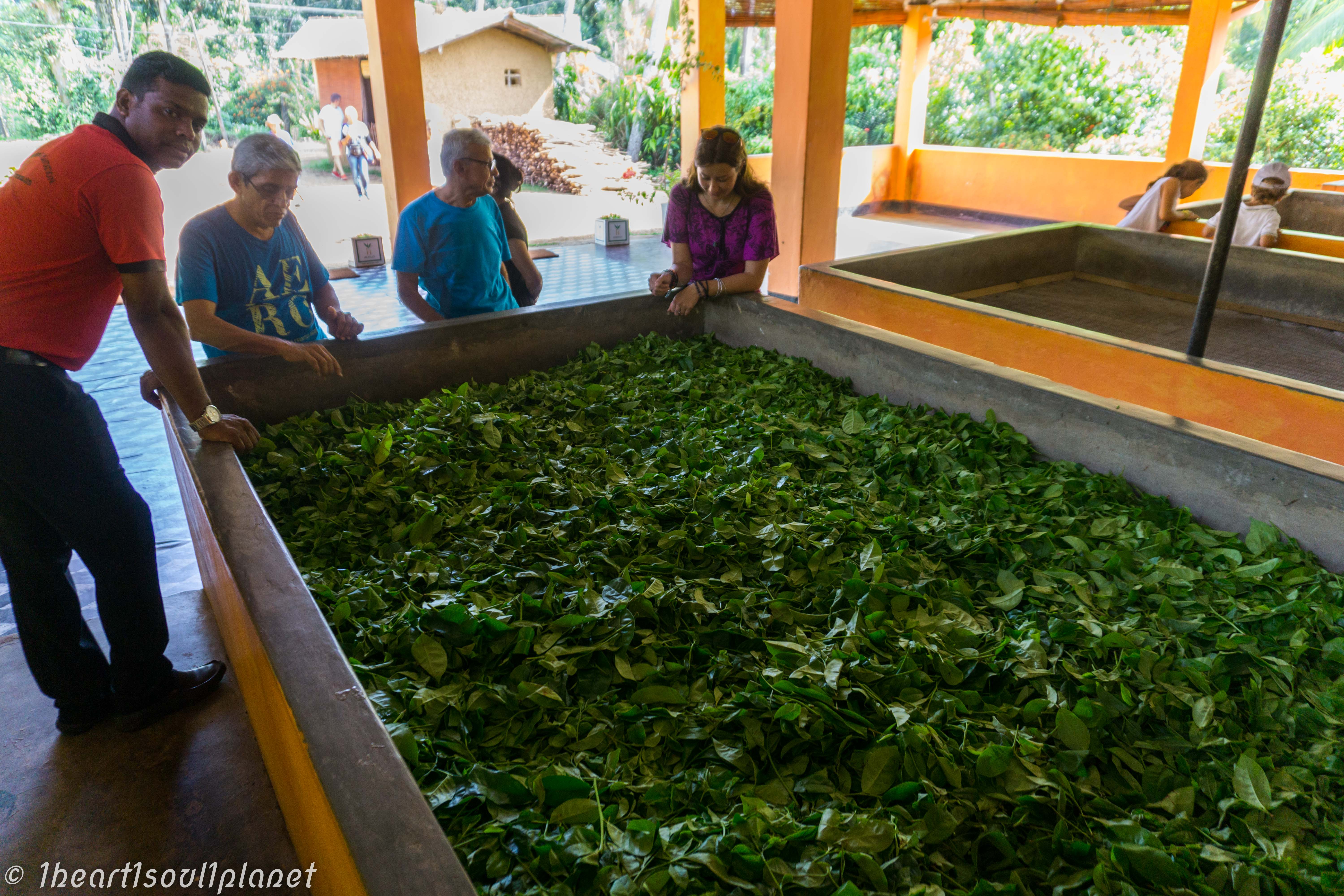 The Virgin White Tea proved to be very delicious, but also way too expensive, so we bought Lemon Grass Tea instead.

The trip to the tea plantation hadn’t taken as much time as expected, so on the way back to our hotel, we stopped at a sea turtle hatchery and bought a tour, where we were shown all turtles who lived there. The guide also explained how they got there, where they live and what they eat and so on.
There were turtles whose legs had been cut off by motor boats or fisher nets, so now they have to stay at the hatchery and be fed.
We even got the chance to hold some of the sea turtles :-) 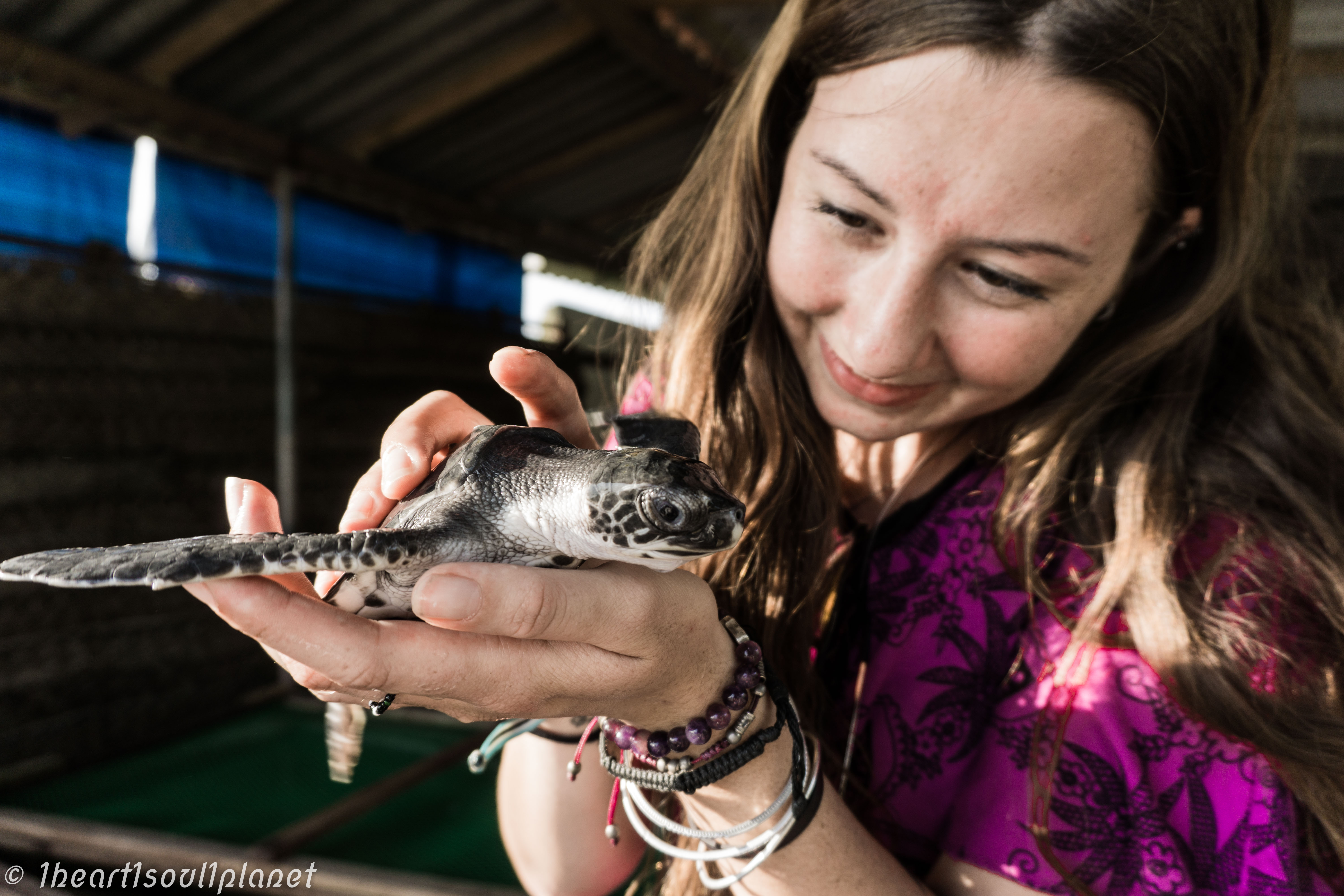 Another trip we made near Unawatuna, was to a very old temple on a hill.
It was built underneath a big rock over 2000 years ago. The interior is rather new with nicely painted walls and beautifully colored tiles on the floor.

Hoping to see animals, we drove to the closest rainforest and bought tickets. Maybe we would have been more successful in finding snakes, if we had accepted to pay for a guide, but we really just wanted to enjoy the peaceful forest alone. 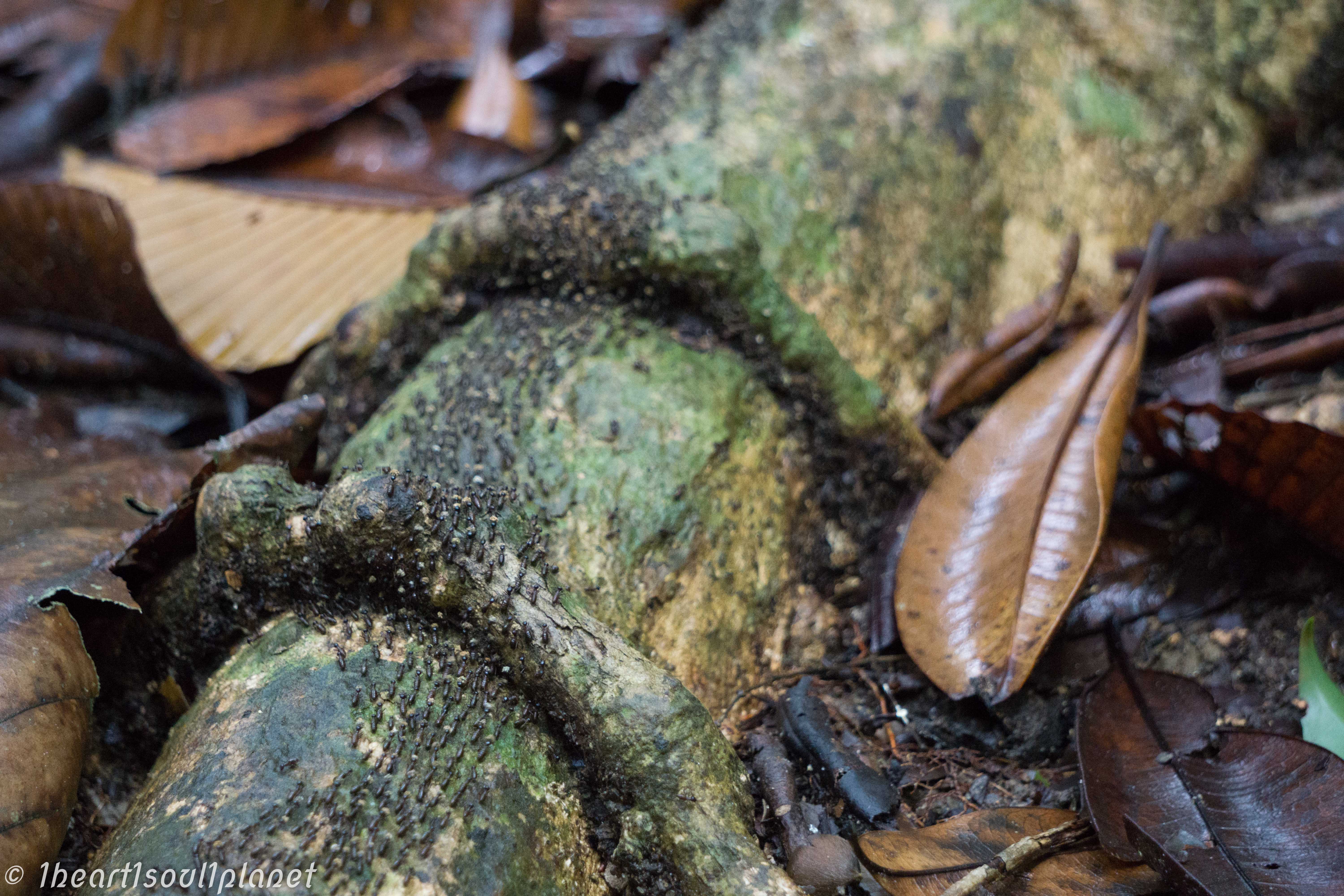 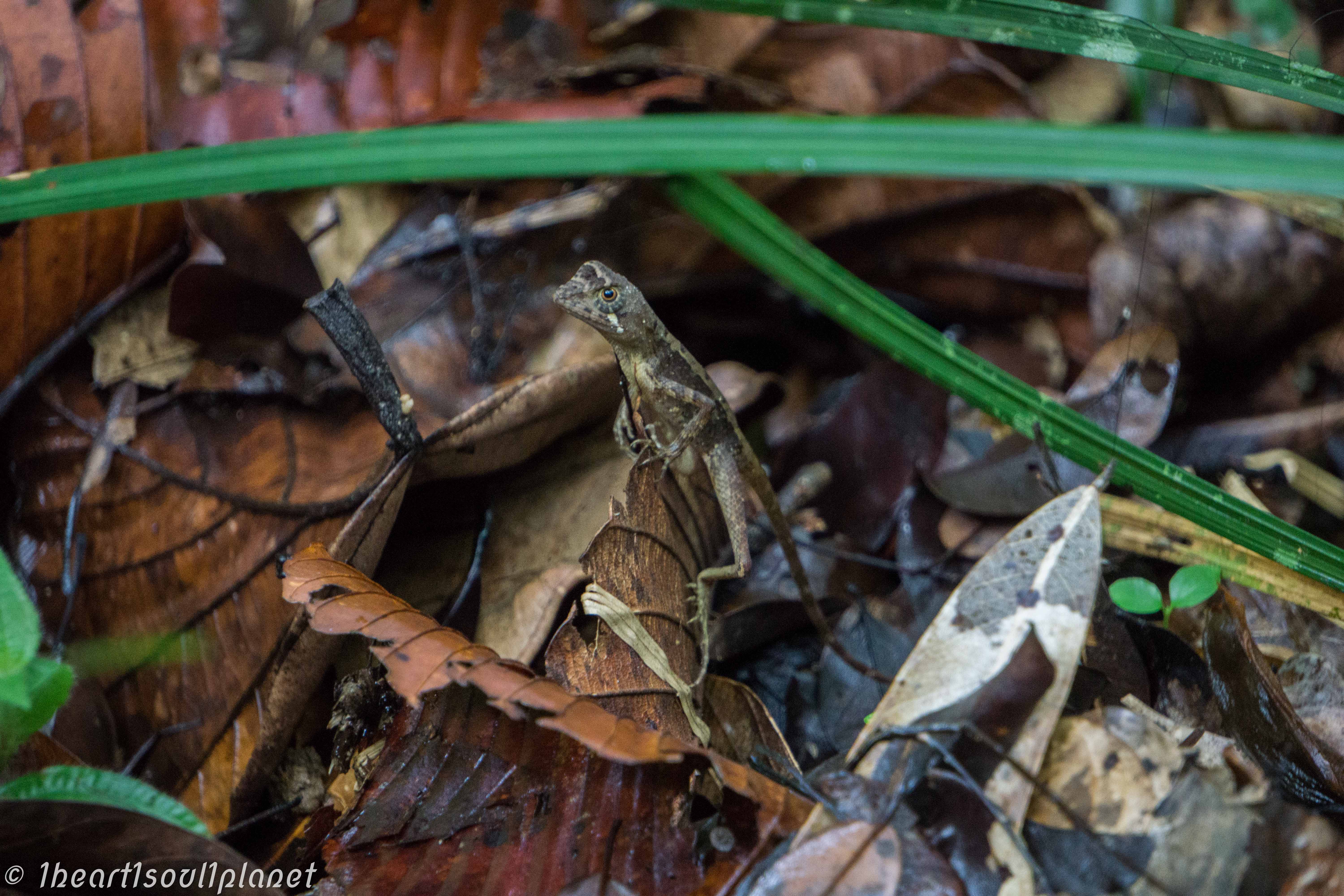 So, no snakes, but a couple of lizards and many, many leeches. Luckily, we had already learned how to get rid of them and had packed salt.
We couldn’t help but feel reminded of our favorite show ‘Supernatural’, where people chase demons off by throwing salt at them. It worked to put salt in our shoes, the leeches stayed away and we’re convinced now, that they’re actually demons…

Since Unawatuna is a rather touristy place, the food in most places was way too expensive for our taste.
Luckily, we found a local vegetarian restaurant, where the delicious Sri Lankan rice and curries is sold for only 350 Rupees, so we dug in. 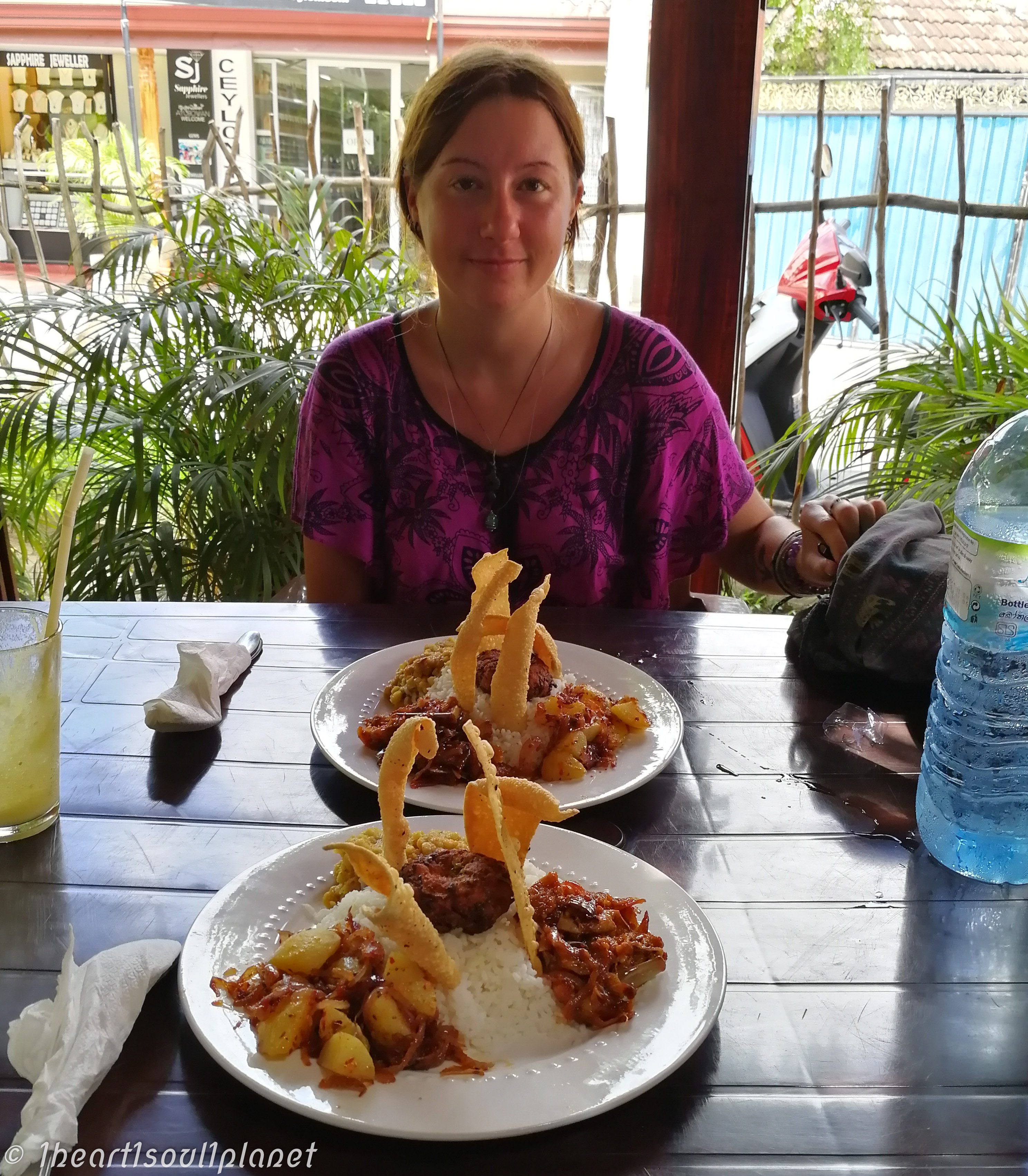 René wanted to go surfing, so we wanted to look for a different place to stay and drove around, checking out hotels, but all were too expensive and in the end, we decided to stay even longer.
Why look further when you’ve already found paradise? 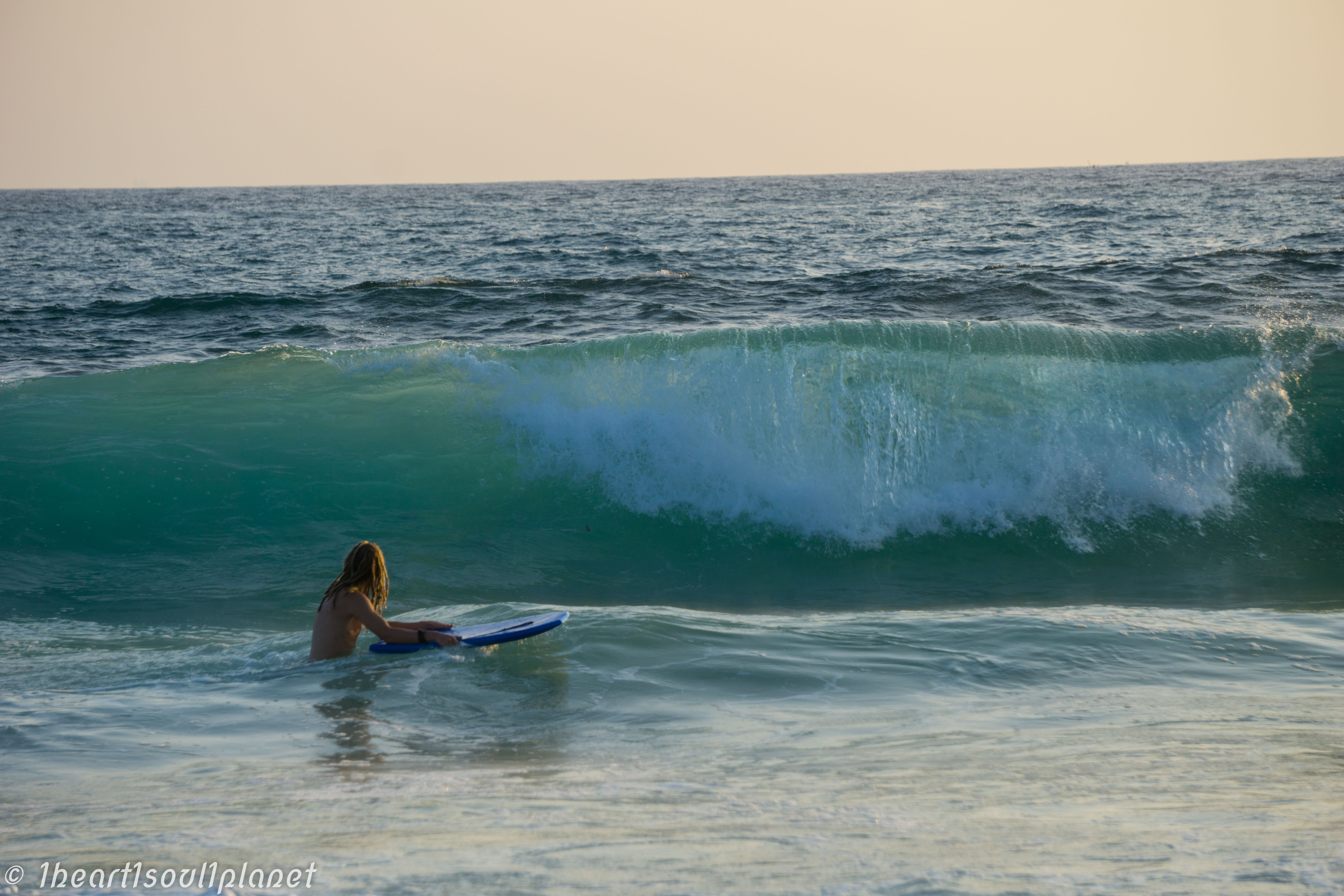 Only when more guests arrived and the place got too crowded for our taste, did we decide that 2,5 weeks in Unawatuna was enough.

After all, we still wanted to explore Sri Lanka’s East Coast…