We really don’t want to say anything bad about India, but our "adventurous" experiences left us quite exhausted and fed up with travelling.
We know that this is only due to bad luck and has nothing to do with the country.
Nonetheless, we counted the days until we could finally go back home- to Switzerland.

Never before did we enjoy our home country as much as in those 6 weeks!
Suddenly, after seeing the poverty in Africa and India, we’re now able to truly appreciate the “normal” luxuries of Switzerland. Not only clean toilets and punctual public transportation, but being able to enjoy the beautiful landscapes without having tons of trash spread everywhere…
However, living out of a backpack despite being home is a bit annoying, to be honest.
Our reactions regarding that matter part a bit, we have to admit. While René was just eager to pack his things and continue travelling, Nici just wanted to rent an apartment and go back to a “normal” life.

First though, we decided to travel a bit around Europe…
Two of our friends had planned a trip to Norway and kindly agreed to let us join them.
We were both looking forward to the journey, though packing for Scandinavia is a bit complicated when you’re living out of a backpack that contains only clothes for tropical countries…
Thanks to generous family members, we got some thick clothes and were ready to go.

Since Nici’s sister lives near Hirtshals (Denmark), from which the ferry departs to Norway, we were able to visit her on Stald Nordkap, where she lives with lots of horses, sheep, dogs, cats, ducks, geese, chickens and bunnies.

After a relaxing day on the beach, we boarded the ferry at 8pm and were amazed by its luxurious interior. Sure, we had already grown accustomed to European standards, but that ferry was extremely fancy… 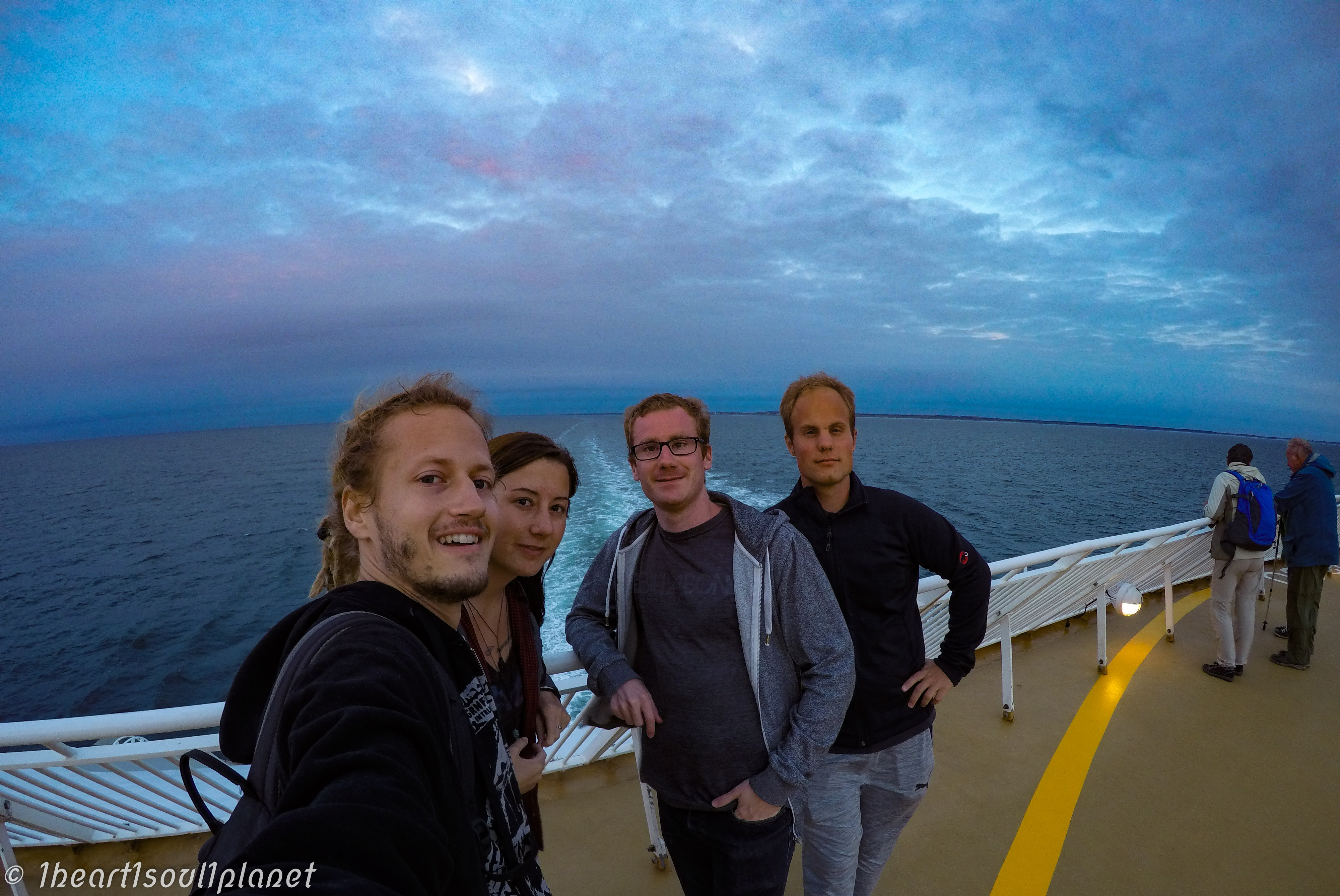 After driving for hours with almost no sleep at all, we were too tired to enjoy the concert on board or the drinks at the bar and decided to go straight to sleep.

Norway greeted us with clouds and rain, when we left the ferry early the next morning. We hadn’t expected much else, but when our hostel informed us that we could not check in yet, we parked our rental in front of a Coop and slept in the car until noon, with the sound of the raindrops hammering softly on the car roof like a lullaby.

After a full night’s sleep and a hot shower, we drove off to explore Stavanger… this time with barely any rain. 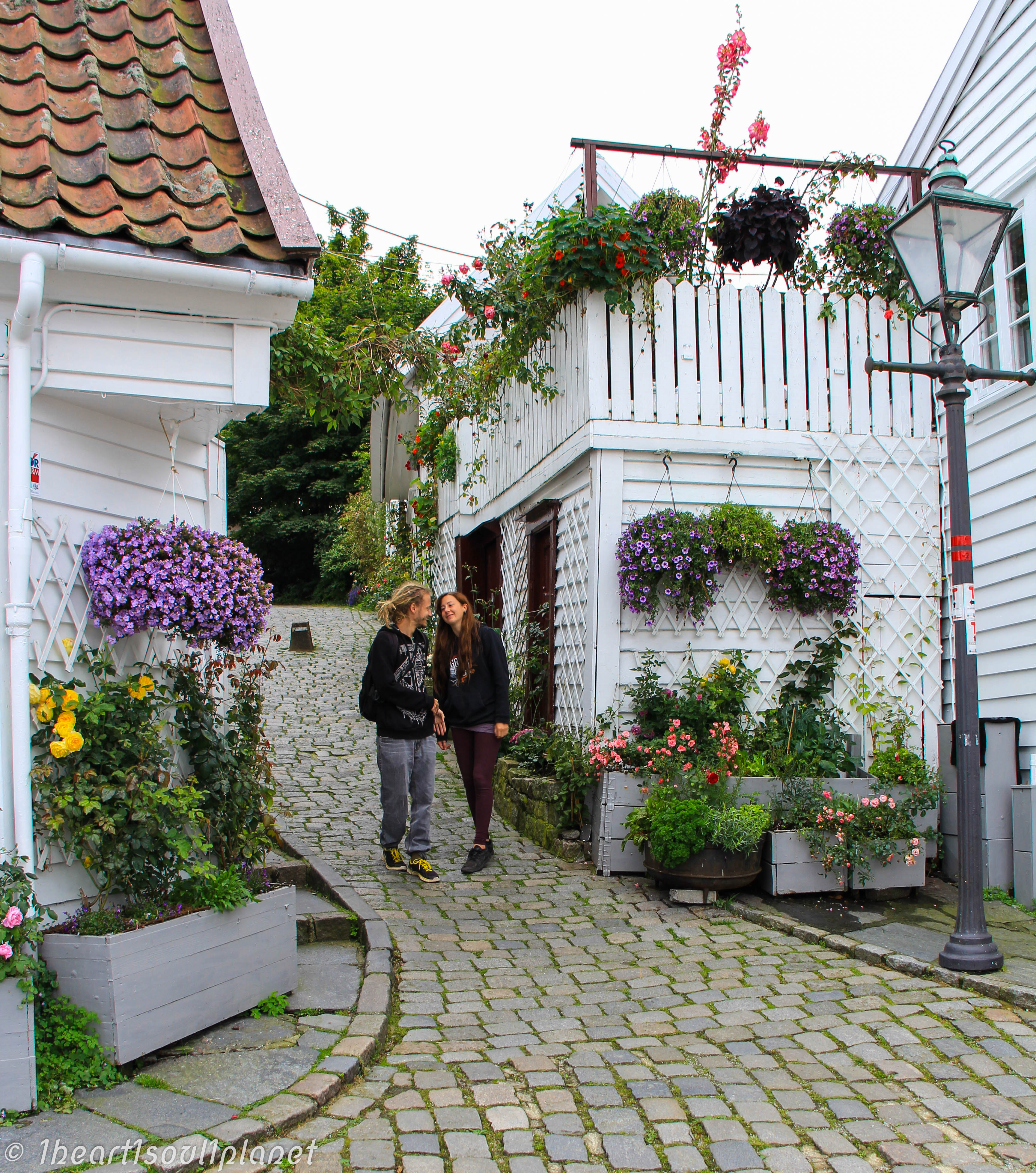 Stavanger is truly an amazing town. We instantly adored the little white houses with pots containing all kinds of colorful flowers on the window sills or by the doorsteps and were able to take some nice pictures. Everything was just the way you’d expect it to be in Norway :)
It was an especially nice welcome, since none of the towns that followed on our trip could top it…

Another comfortable yet cool night passed and we got up early for our first hike in Norway.
The scenery that accompanied us on the ride to the Preikestolen was breathtaking- but we knew there was more yet to come.

The first thing we noticed when approaching the hiking area, were the loads of people that either were brought there by bus or their own vehicles.
We are not exaggerating when we say that literally the whole 2 hours to the Preikestolen, the way was crowded with tourists. 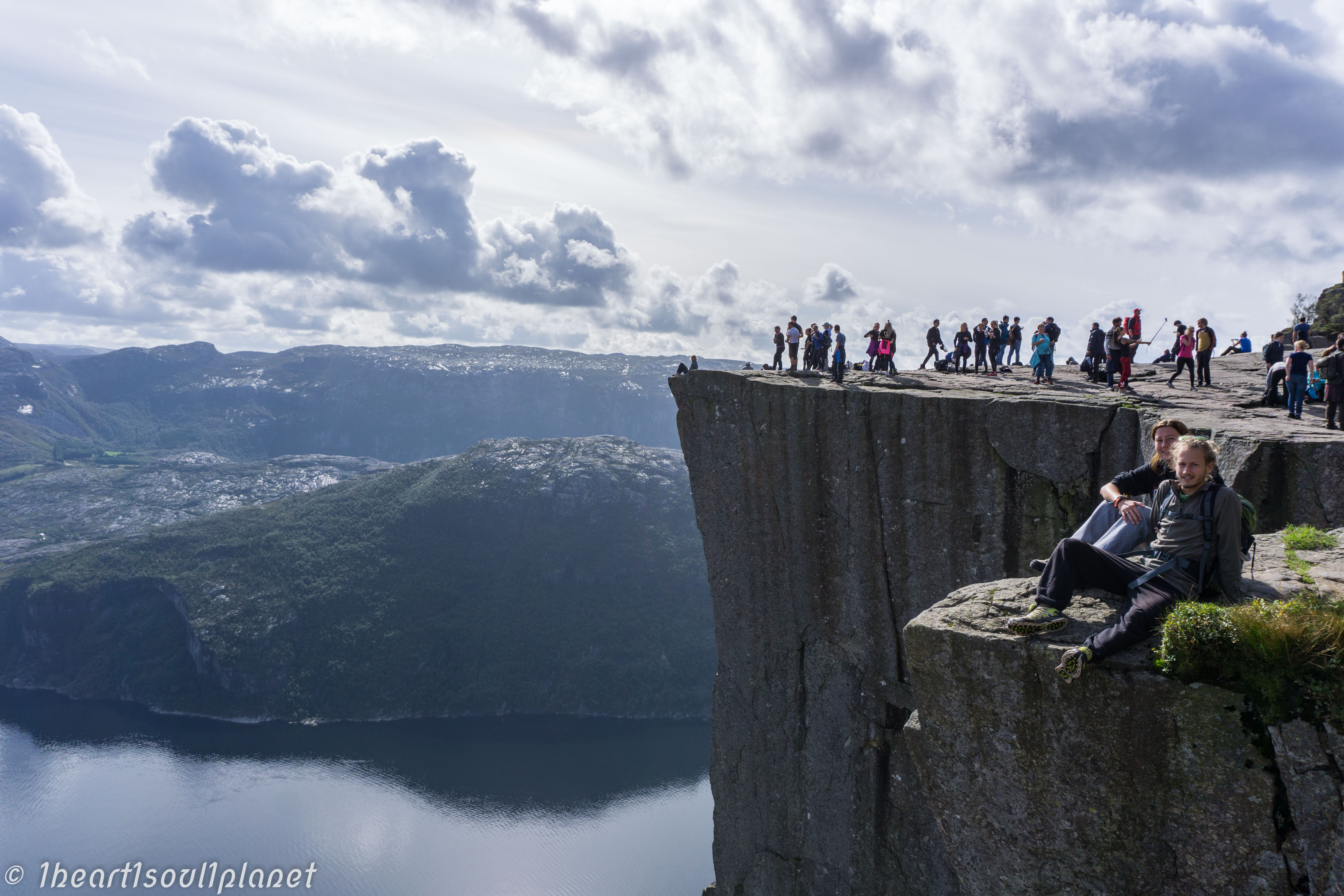 It was impossible to choose our own pace without having to overtake the people in front of us.
It didn’t bother us, however, and we were able to take in the beauty of our surroundings and hey- we even managed to take some pictures with no other people on them.
The Preikestolen itself was crowded as well and we really didn’t feel like elbowing our way through to reach the edge, so we observed the flight of our friend’s drone instead and took our photos in other areas.

Feeling light-headed by the surprisingly easy hike (or maybe the thin air?), we decided to accept another challenge and visit the Trolltunga the next day.
We knew that it was going to be harder, since it’s a 28 kilometers and approximately 12 hour hike, but as we said… thin air… 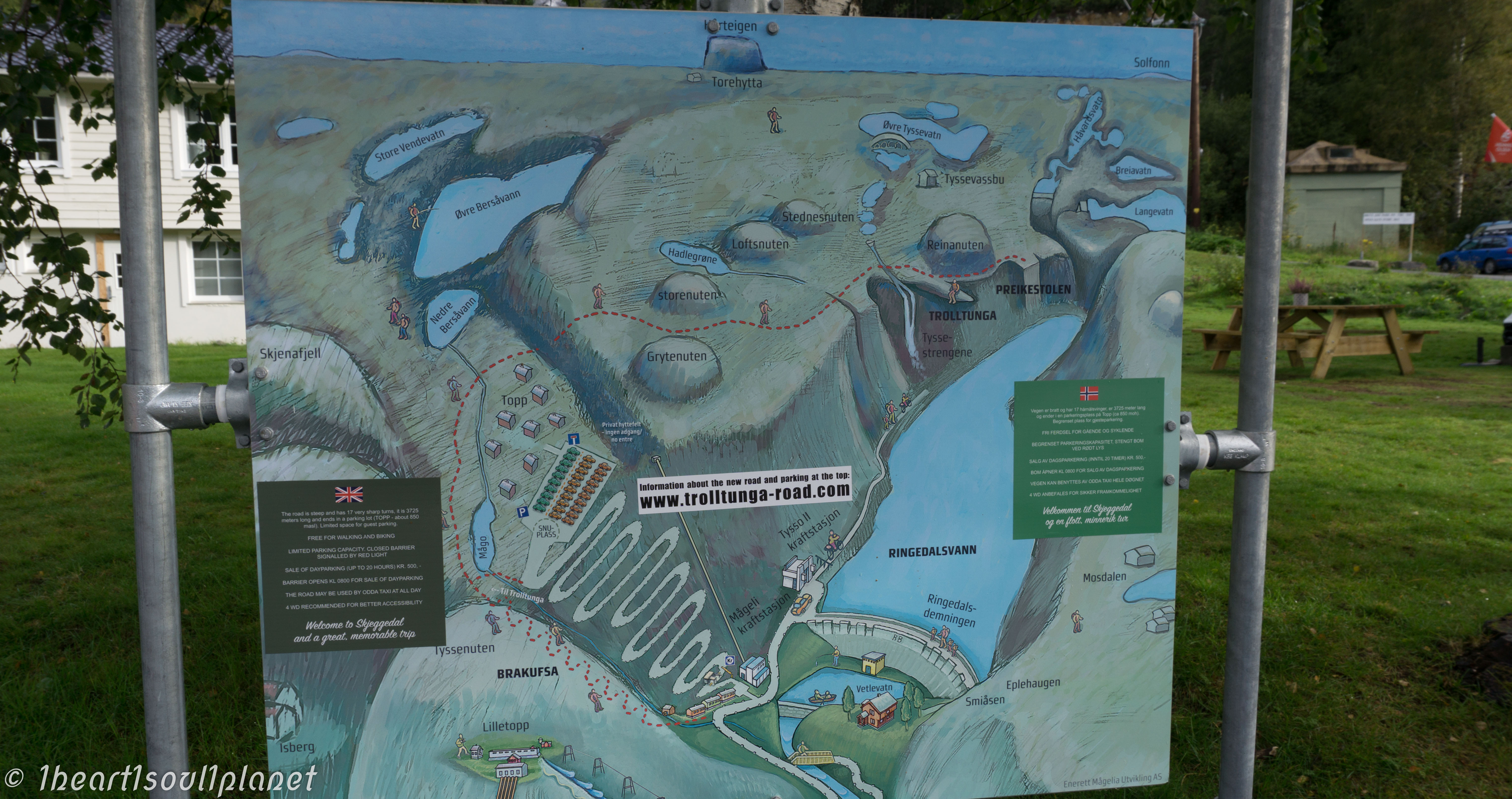 Some people spend the night in a tent near the Trolltunga to split the hike in two and we would have done the same, but our friends had no tents and so it was clear that we’d have to do everything in one day.

The first four kilometers were on a serpentine road up the mountain and it was a *beep* until we finally reached the real hiking trail and were left gaping at our beautiful surroundings while devouring some bread and vegan cream cheese and letting the drone fly once again. 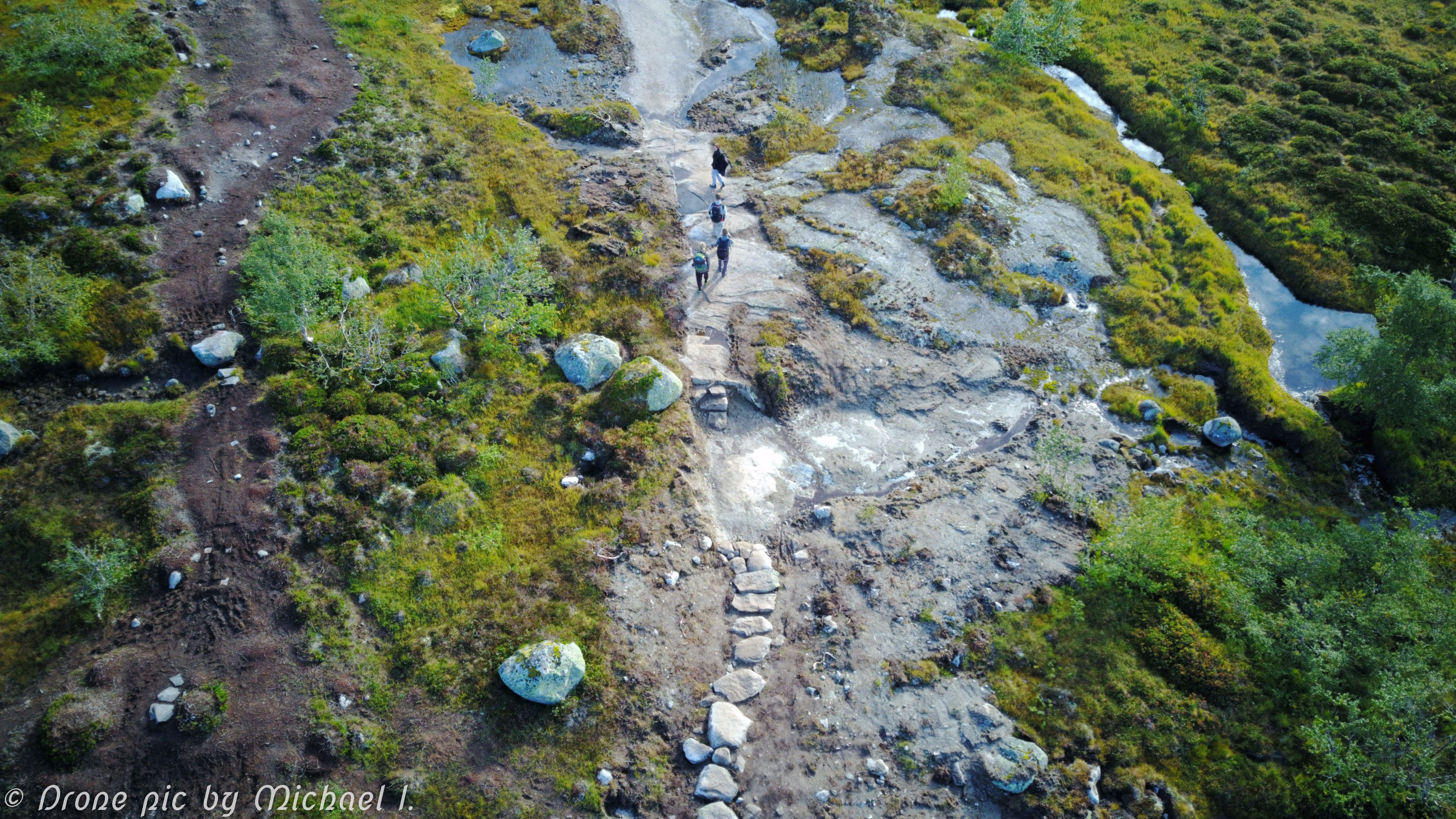 But even here, on the hard hike to the Trolltunga, there was never a moment without other people around. We had expected to be able to enjoy some solitude on the trek, since it was supposed to be extremely hard.
Optically, it seemed to have less people, but they were spread on a 14 kilometer-trail, so all in all, it was probably a similar number of people as on the Preikestolen.

After a vast, flat area, we felt light-headed once again- until we reached the worst climb.
René and Michael were the faster ones this time, but Nici had wasted most of her energy literally running up to the Preikestolen the previous day and found herself considering sitting down on some rock and waiting for the others to return.
Simon was kind enough to wait and together, they found the motivation to continue. 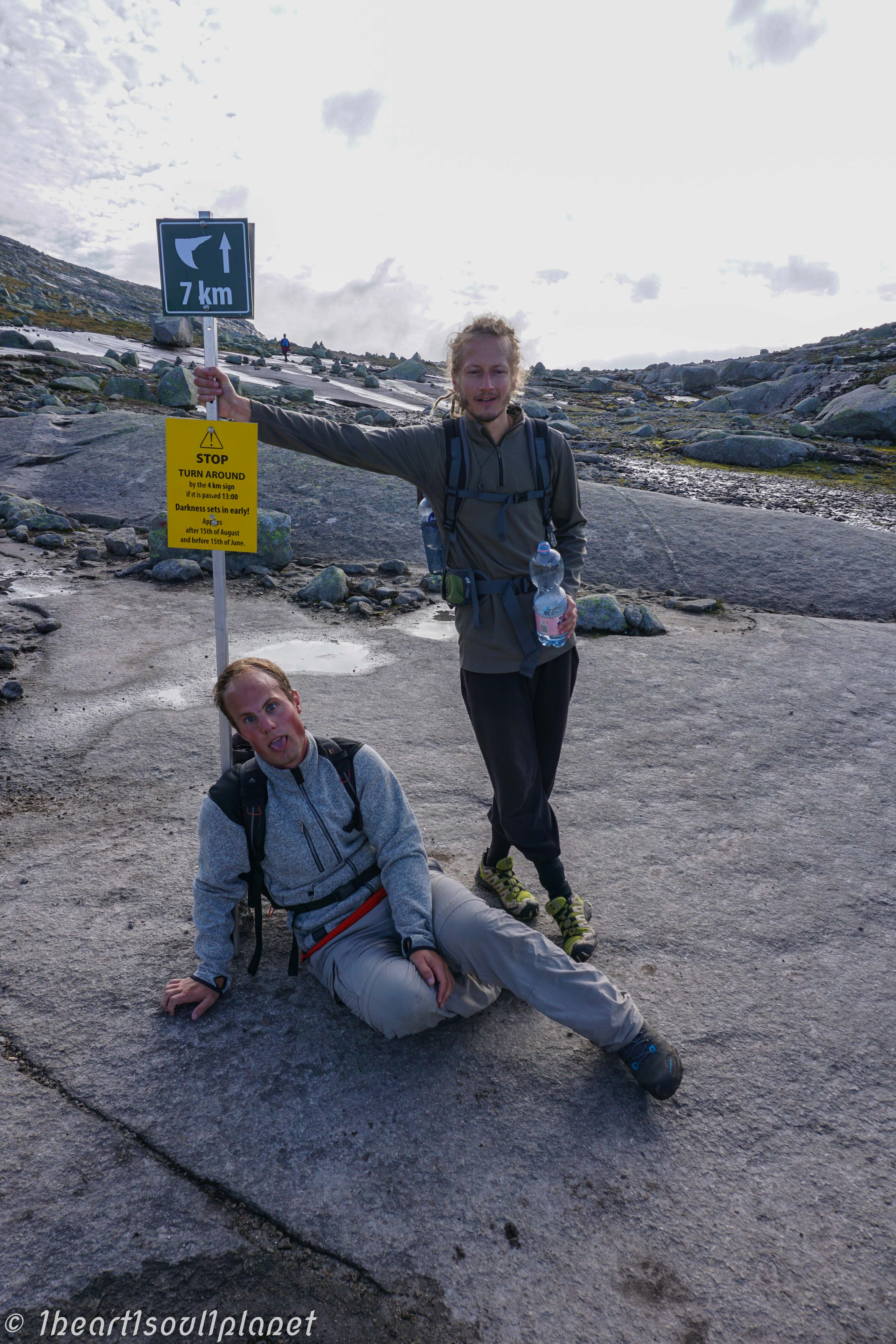 The trail stretched on and on and when we reached the sign that said there were only four kilometers left, the majority of our group decided that there would be no lunch break until we arrived at the Trolltunga. That left Nici hangry and poor René struggling to keep the good mood. 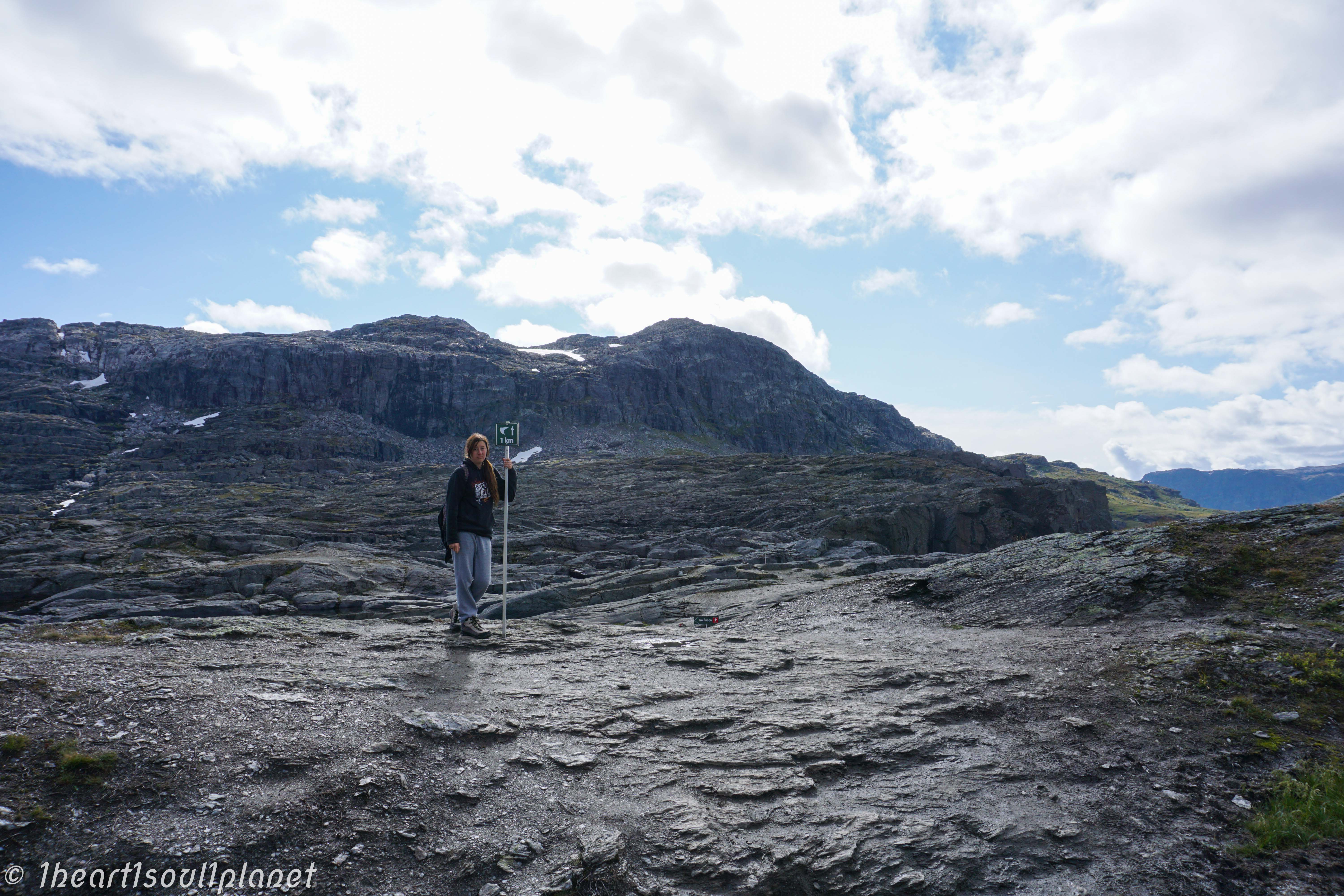 At least there was some kind of system on the Trolltunga: people actually stood in a queue so that everybody could step out on the stony tongue alone to take a good picture.
It was cold though. Really cold. Some bread in our bellies gave some warmth during the 15 minutes we spent standing in line.
We had decided to split up so that two people could take pictures while the other two stood on the tongue. 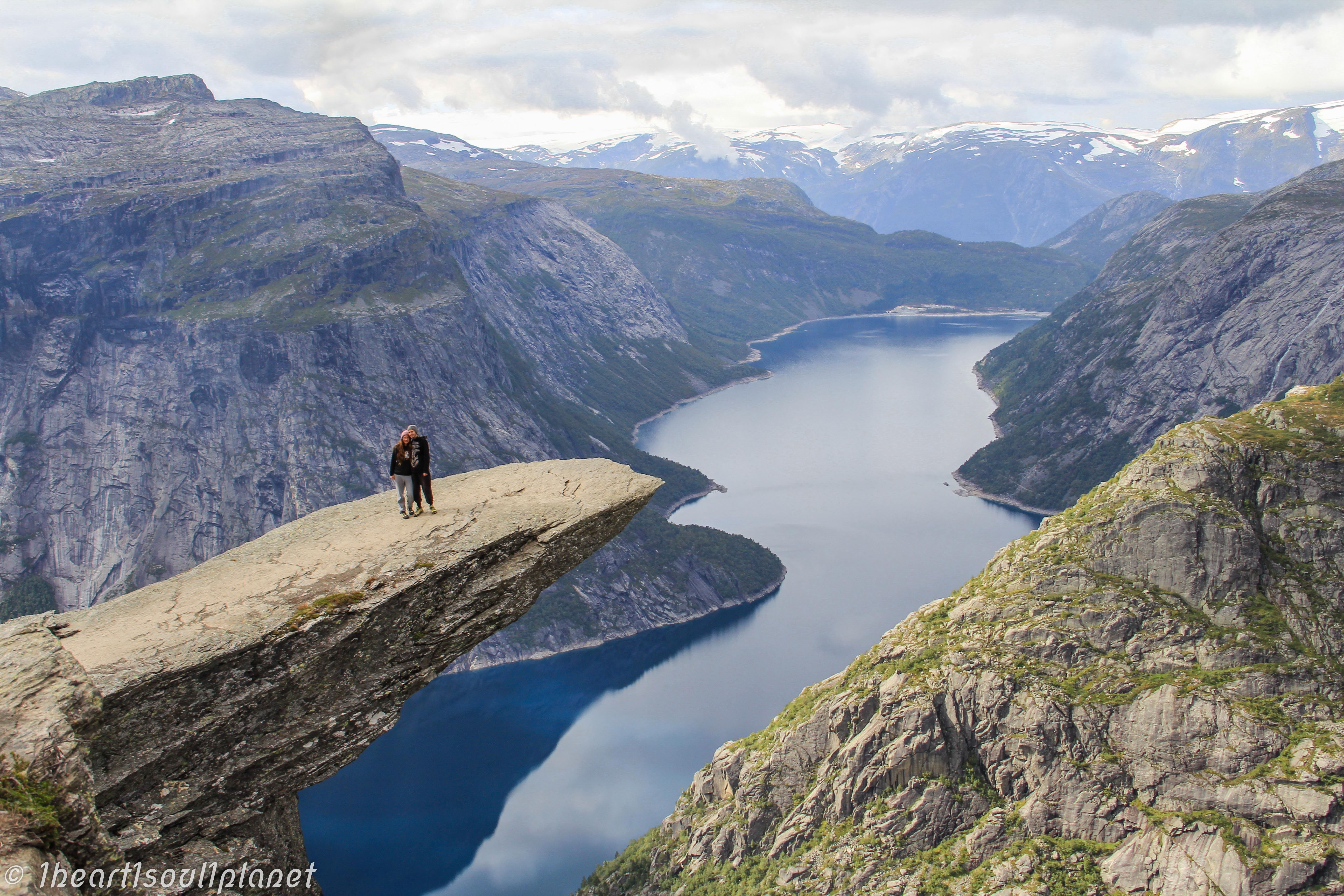 When all pictures were taken, we packed our things and started to hike back. Our friends wanted to let the drone fly once again, but the two of us were too weary to spend more time on the mountain and so we split up again and went back to our Airbnb.

Surprisingly, the last four kilometers on the serpentine road seemed to stretch on endlessly and we could barely move our feet anymore. There were even some tears shed (guess whose), but in the end, we arrived and after a hot shower and massaging our legs, they didn’t even hurt that much anymore.

In the comfort of our rental, we drove to Bergen the next day. Through tunnels (lots of tunnels), by waterfalls (lots of waterfalls) and over mountains that offered a beautiful view across the fjords. 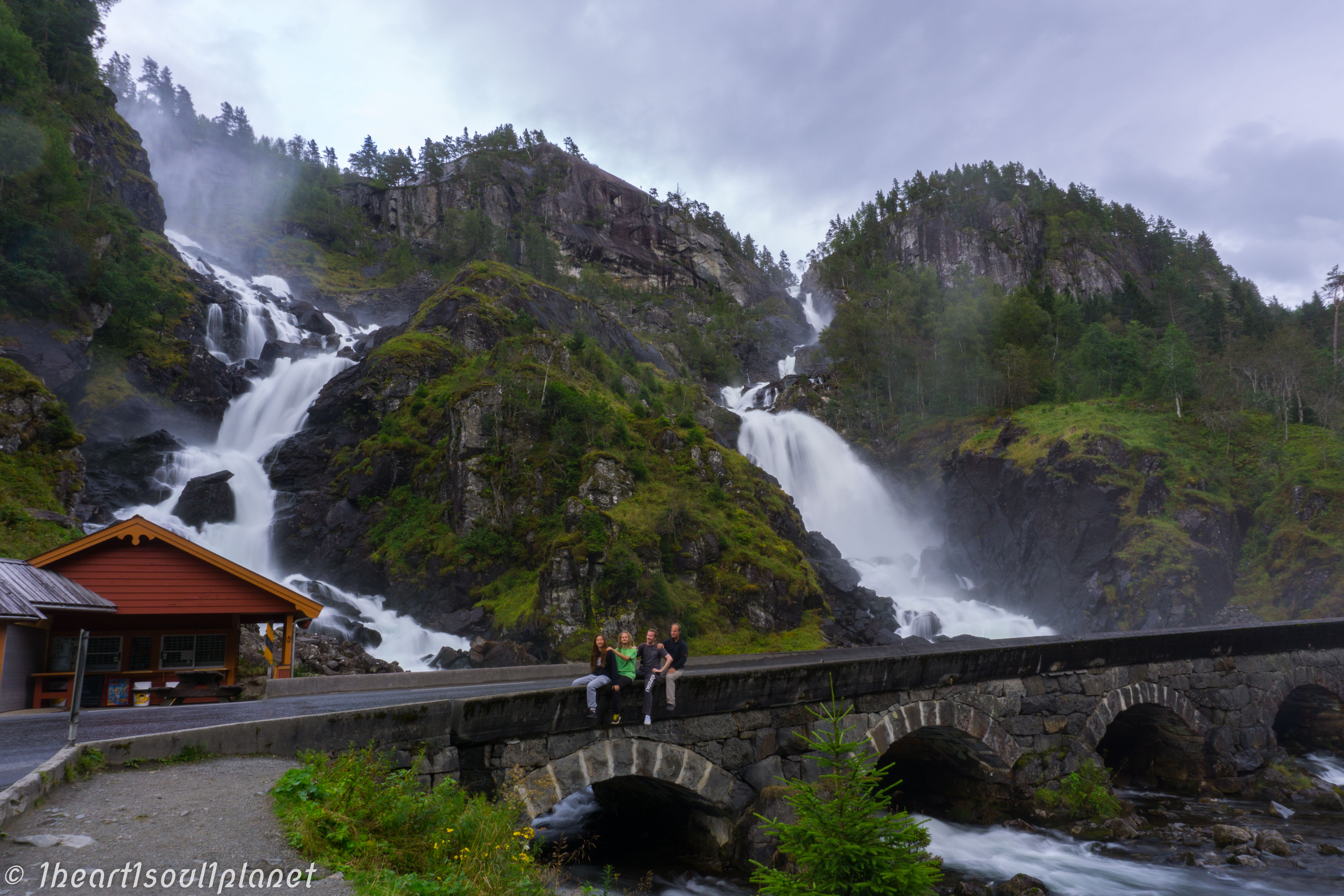 Personally, we wouldn’t say that Bergen was especially beautiful, but it had nice restaurants and pubs and we treated ourselves to good food and good (expensive) beer. 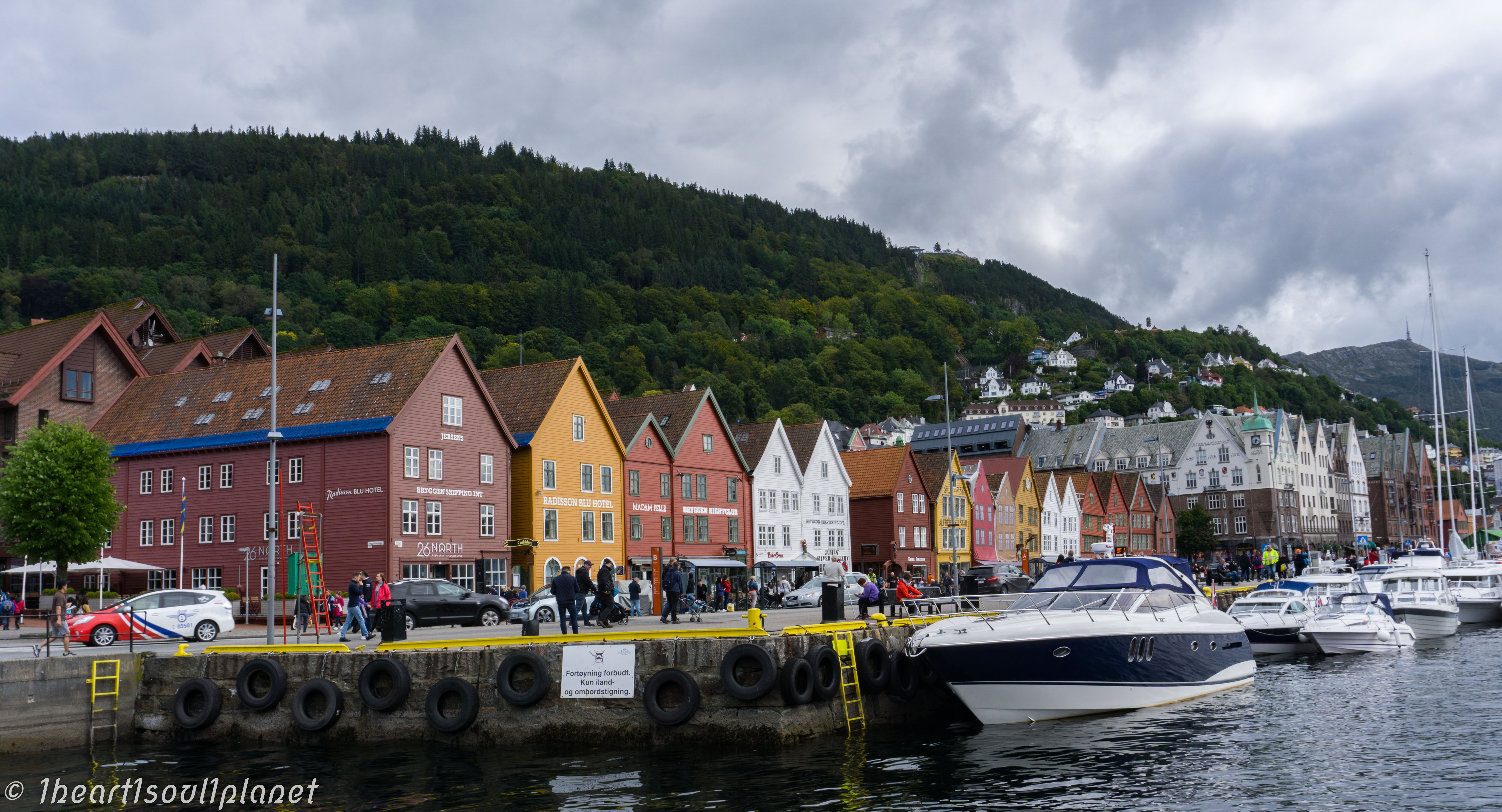 Our further road trip led us over a beautiful mountain, where we stopped to take some pictures in the snow…

Often, the road was blocked by herds of sheep- which reminded us of Africa… 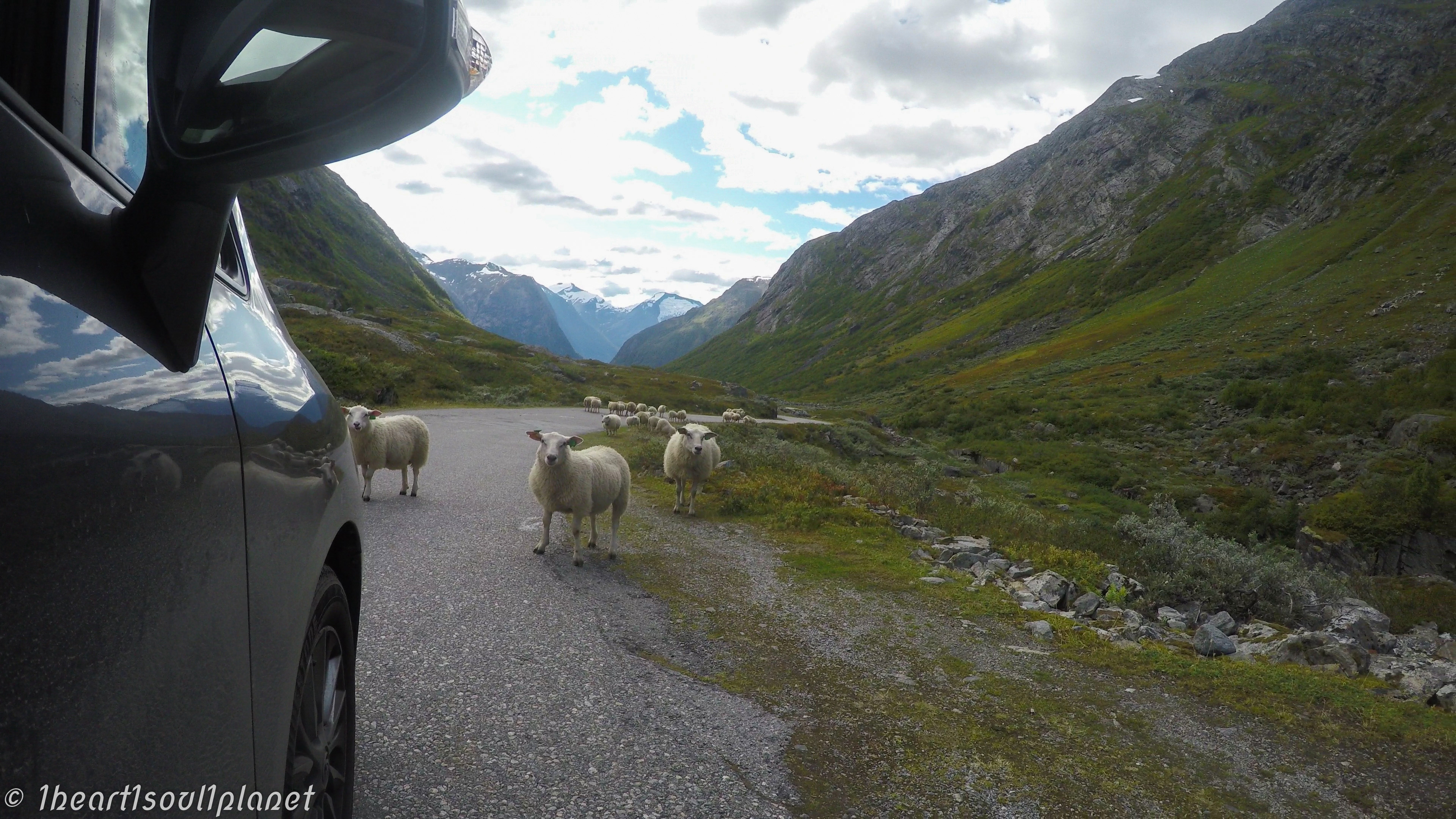 The view, we encountered, was breathtaking almost during all of our roadtrip :)

Over the Geiranger Fjord and Lillehammer, we drove to our last stop, Oslo, where we drank some more beer and enjoyed delicious meals in a vegan restaurant.

The same fancy ferry as before brought us safely back to Denmark- only this time the trip took only five hours.

Our friends then drove back to Switzerland but the two of us stayed another four days in Denmark with Nici’s sister and Mum, before taking a plane back home…