We were given the opportunity to admire Indian driving when we took a local bus to Margao, from which our night bus was supposed to depart.
The ride took only 1,5 hours, but there were at least ten different situations of near-death experiences involved, that made us clutch to the poles in fear of perishing on the road. Might be we’ve grown a bit overanxious since that day we took somersaults in the Namibian desert or might be some Indian bus drivers follow the motto ‘No risk, No fun’. Be that as it may, it wasn’t very funny for us nor the drivers of the cars that were forced to drive off the road, when our bus was overtaking. The law of the strongest seems to rule the roads in this country and when you drive a bus, you’re on the save side, right? Just honk and you’re free to overtake, no matter if a dozen cars are coming towards you on the other line.

Anyway, we survived with neither road rash nor heart attack and reached Margao. Our bus wasn’t there though and we waited for a couple of hours, until we were told to get on a bus that wasn’t ours, but was supposed to bring us to it. It did, in the end, though in between there seemed to be several misunderstandings, after which our bus drove to some place and then back again.
When safely aboard of the right bus though, we stretched our limbs in our bunk bed and caught some sleep before reaching Hospet.
Hospet was not our final destination, however. From there, we took a rickshaw to Hampi. 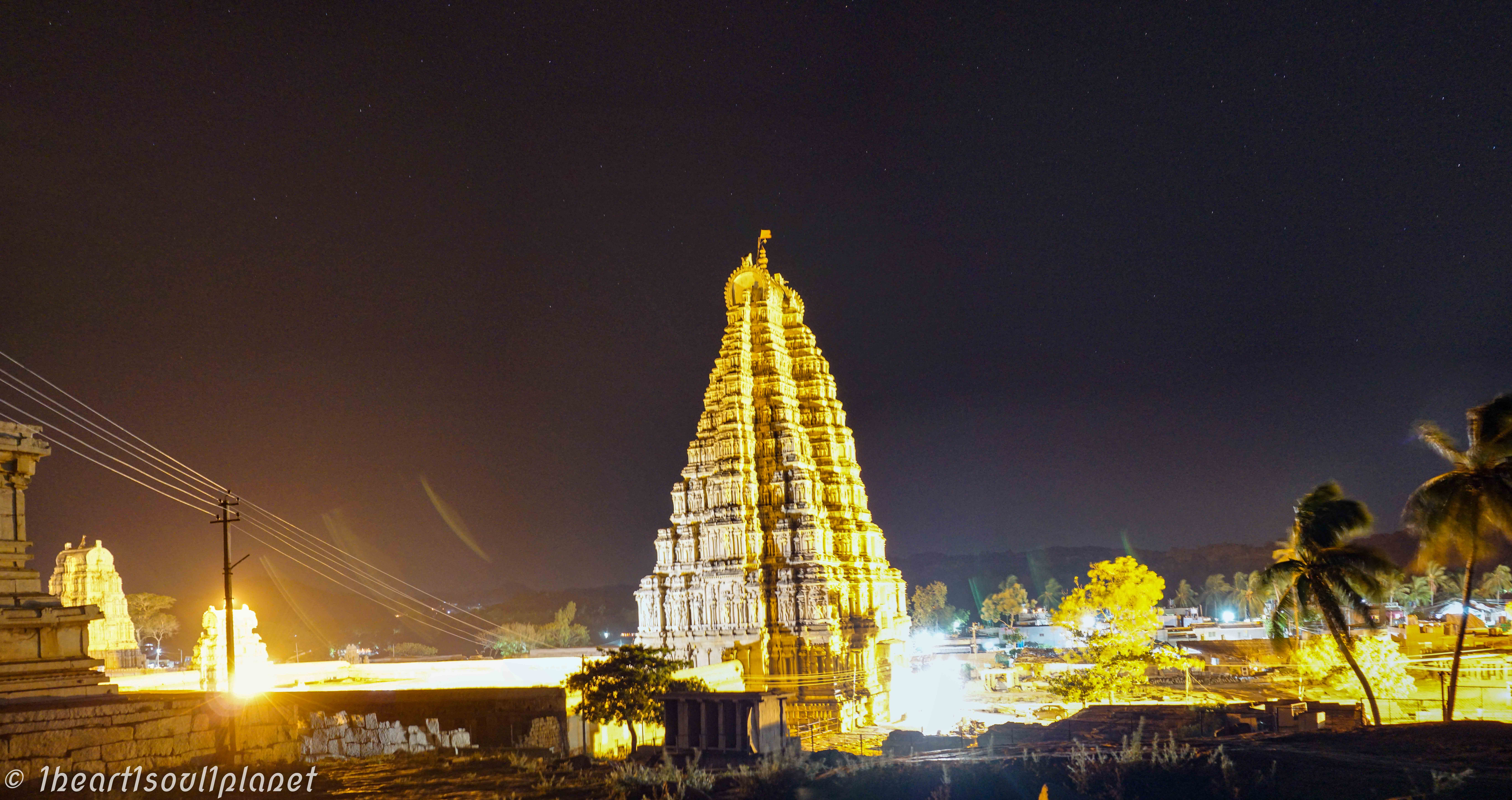 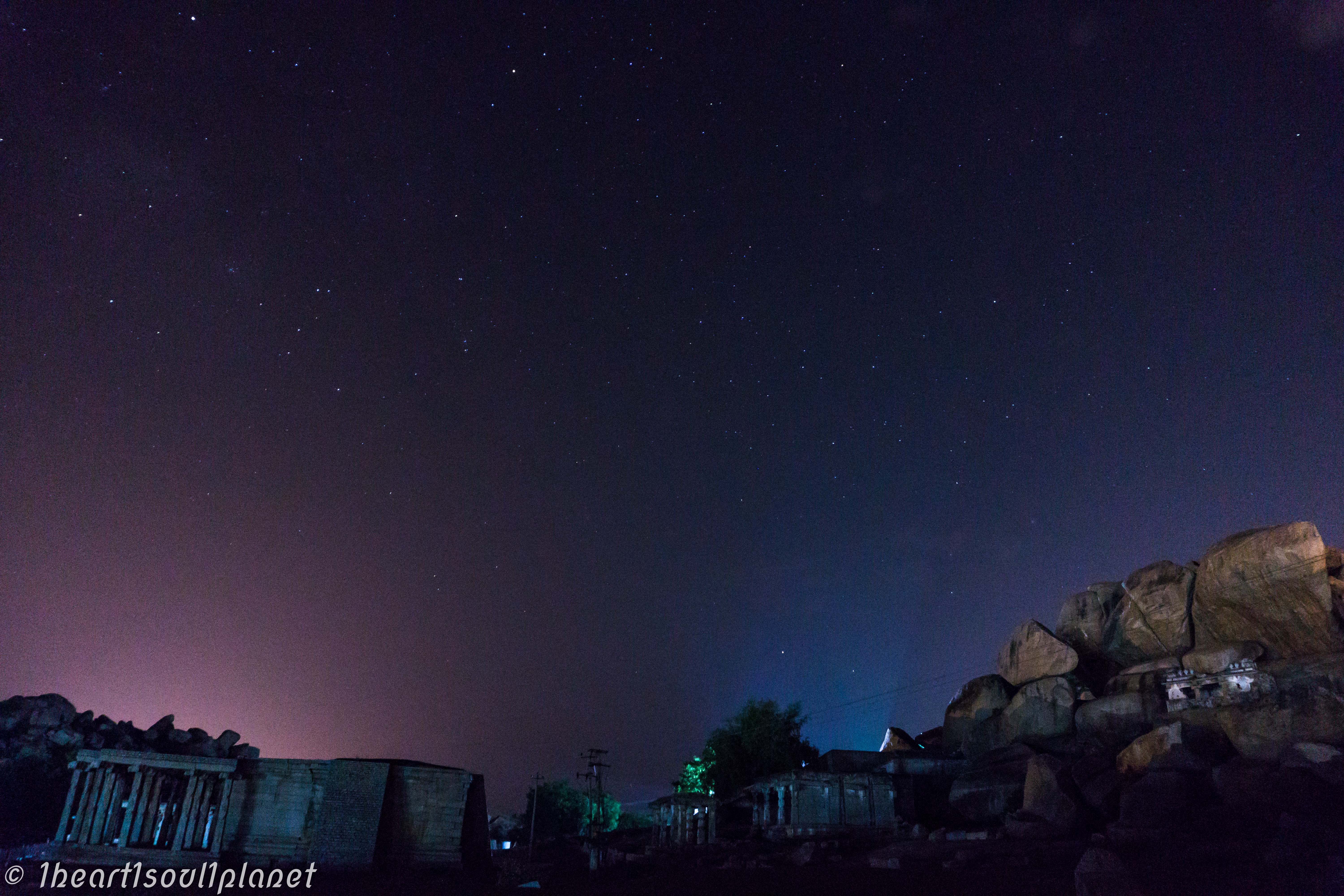 It was already 1.30am, when our rickshaw driver, Aki, sought his way through a labyrinth of narrow alleys that wind their way through small stony houses the color of sand, with flat roofs and ladders or metal staircases that lead to them. The first thing to catch our eyes however, was the big temple near Hampi’s entrance gate, which is illuminated during the night and glows warmly in yellow and orange.
The town was deeply asleep, the windows of the houses dark, its owners dreaming. Some dogs and people alike were sleeping outside, the humans covered by colorful blankets, the dogs by their fur. No one needed to be warmed that night, though, since the warmth of the night told stories of the heat of the day.

Our guesthouse was deserted and it took us a while to realize that the owner had prepared a room for us and left the door open, but when we finally did, we sank into bed and enjoyed some rest.
The heat of the day awoke us at around noon and we were soaked in sweat and felt as if we had awoken in a sauna.
Our bellies were empty and we were eager to explore the towns and especially its restaurants. Since Hampi is a very religious place, we had read that meat is not eaten here and that sounded very promising to us. The more vegetarian food there is, the more vegan options are usually available.
And Hampi definitely offers more than enough restaurants! We strolled to Mango Tree, left our shoes outside (that reminded us of Thailand) and sat down onto the mattresses and cushions on the floor, spreading our legs underneath the low table. The walls were covered with colorful fabrics and carpets, showing Ganesh or Shiva or… Bob Marley, with a joint between his lips.
Used to tourists, the waiters spoke English well and advised us on what foods to eat that didn’t contain dairy. Other than in Goa, there was a list of Israeli meals and we chose Falafel with Hummus :-)

We then strolled farther through the little town, admiring the markets with their range of glistening golden bracelets and earrings, and colorfully patterned fabrics. 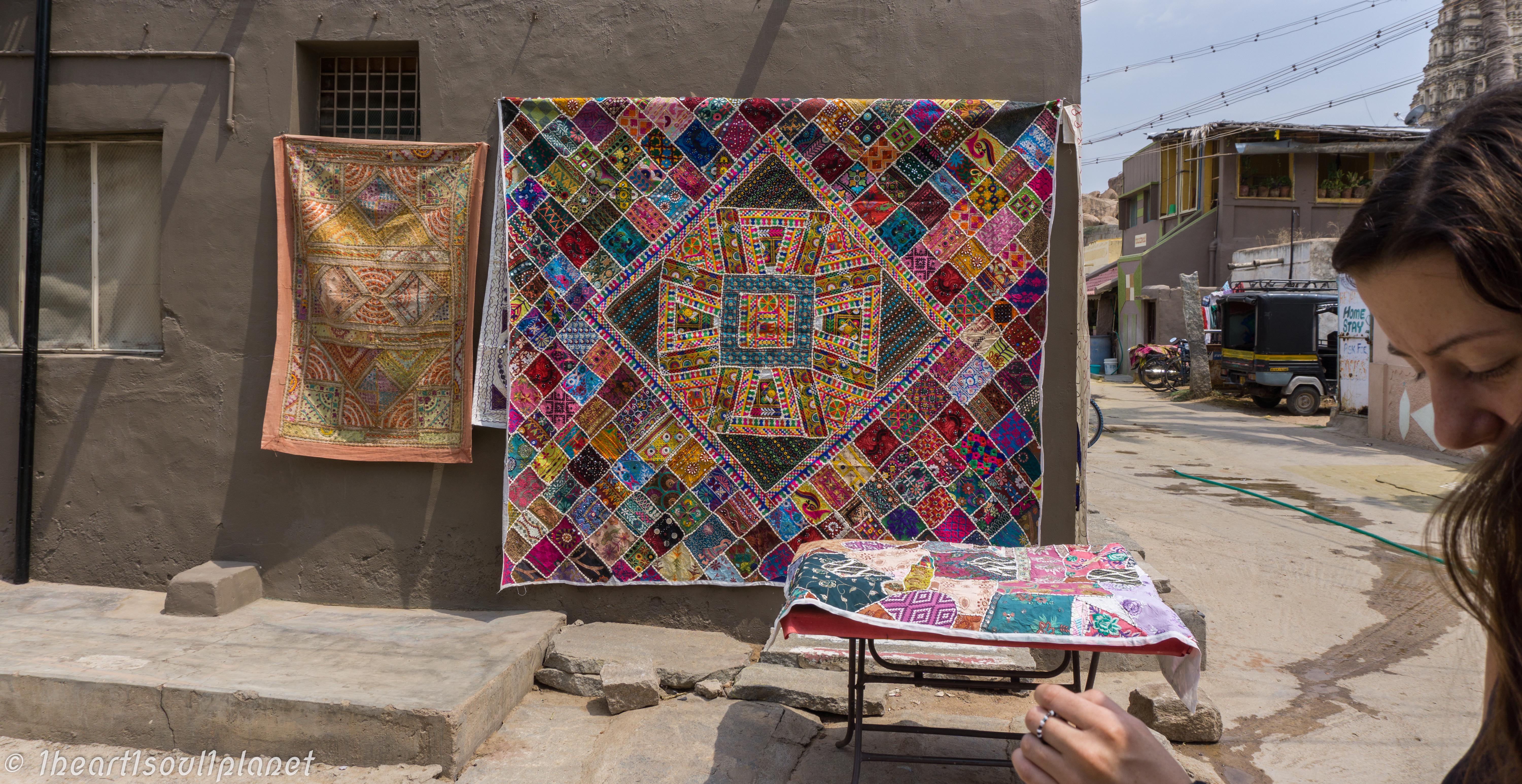 Of course, we wanted to see the big temple in daylight, but the day was extremely hot and after we had left our shoes at the entrance of the temple, we burned our feet on the scalding stones. There were rugs alright, but they didn’t lead to every corner that we wanted to visit.
A temple elephant with a painted head was eating hay underneath a stony roof and he seemed to be accustomed to people taking pictures of him. We felt sorry for him, though. He was chained and crammed in a small space enclosed by pillars- and apart from an early morning bath in the river, there’s not much for him to do, apparently. 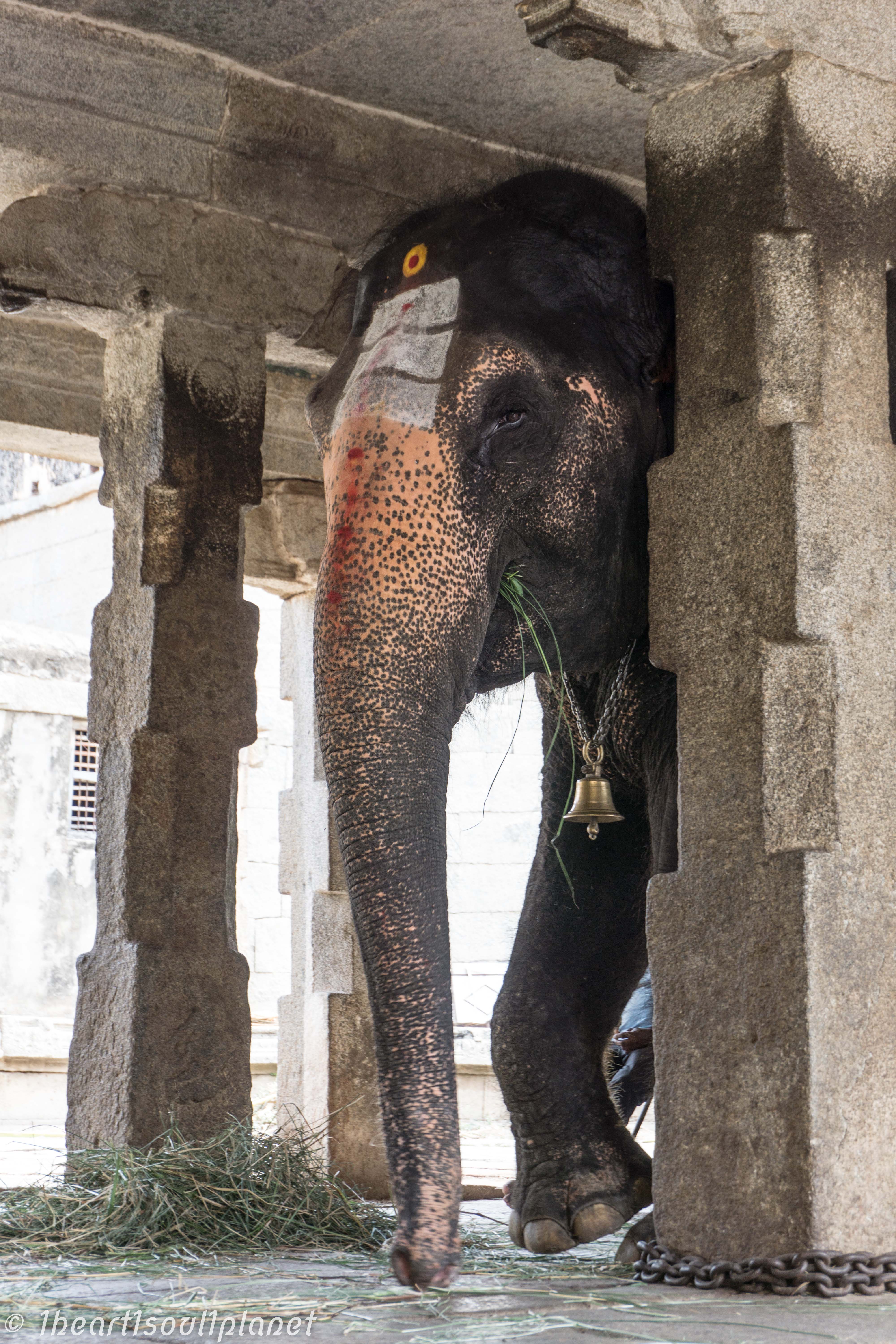 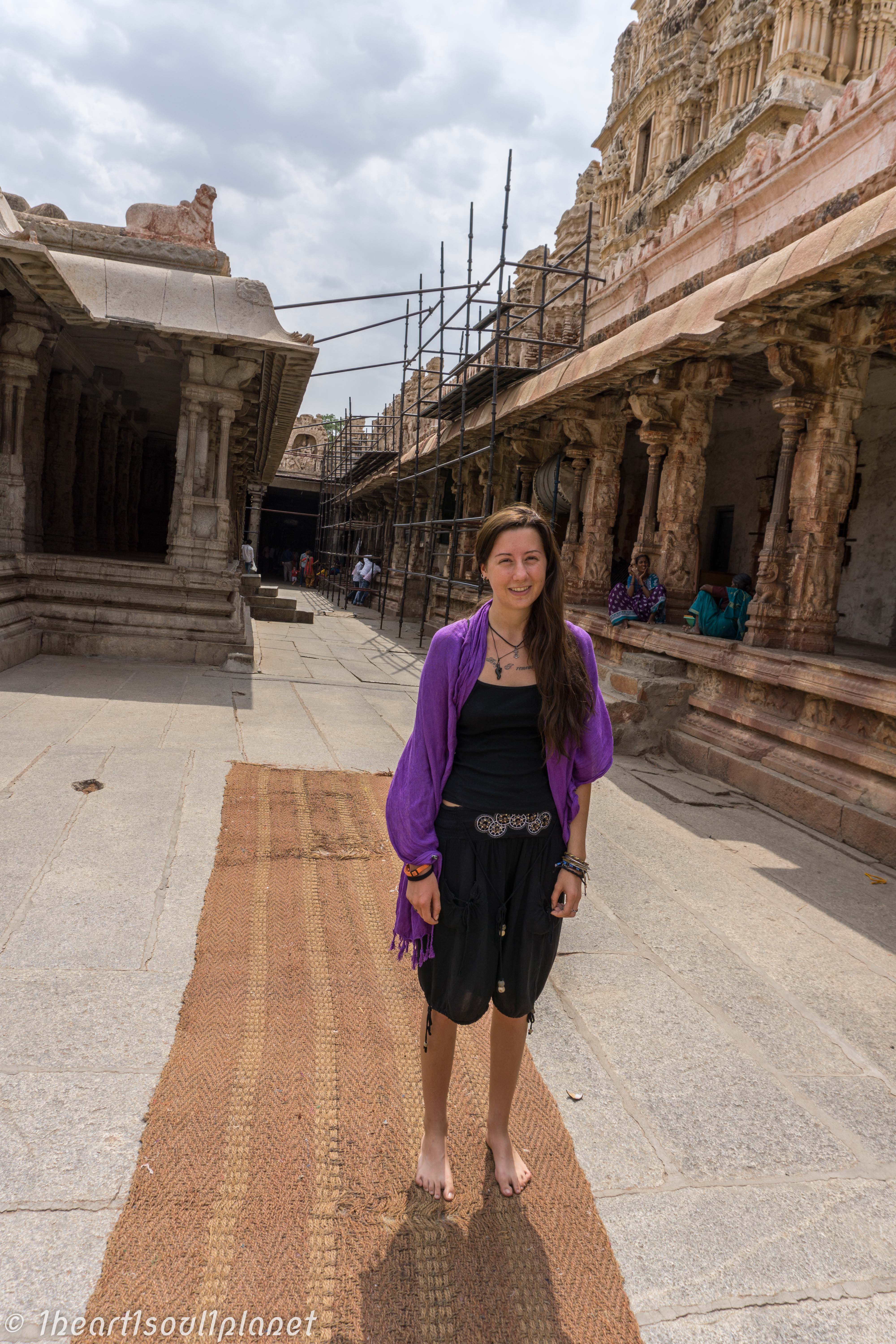 After finishing our visit in the big temple, we walked up a hill to where old stony ruins of ancient times are overlooking the town of Hampi.
It was 38 degrees in the shade that day, though, and we soon grew weary of walking around and since we had no water left, we decided to go back and have some food and water.
We wanted to take a time-lapse of the sunset from atop the hill, but miscalculated and arrived, when the sun was already a fiery ball approaching the mountains in the distance.
We enjoyed the view nevertheless and made a short time-lapse, before people asked us to take pictures with them and a guard began chasing people off the hill, since it closes at night. We decided to come back the next day, but sooner. 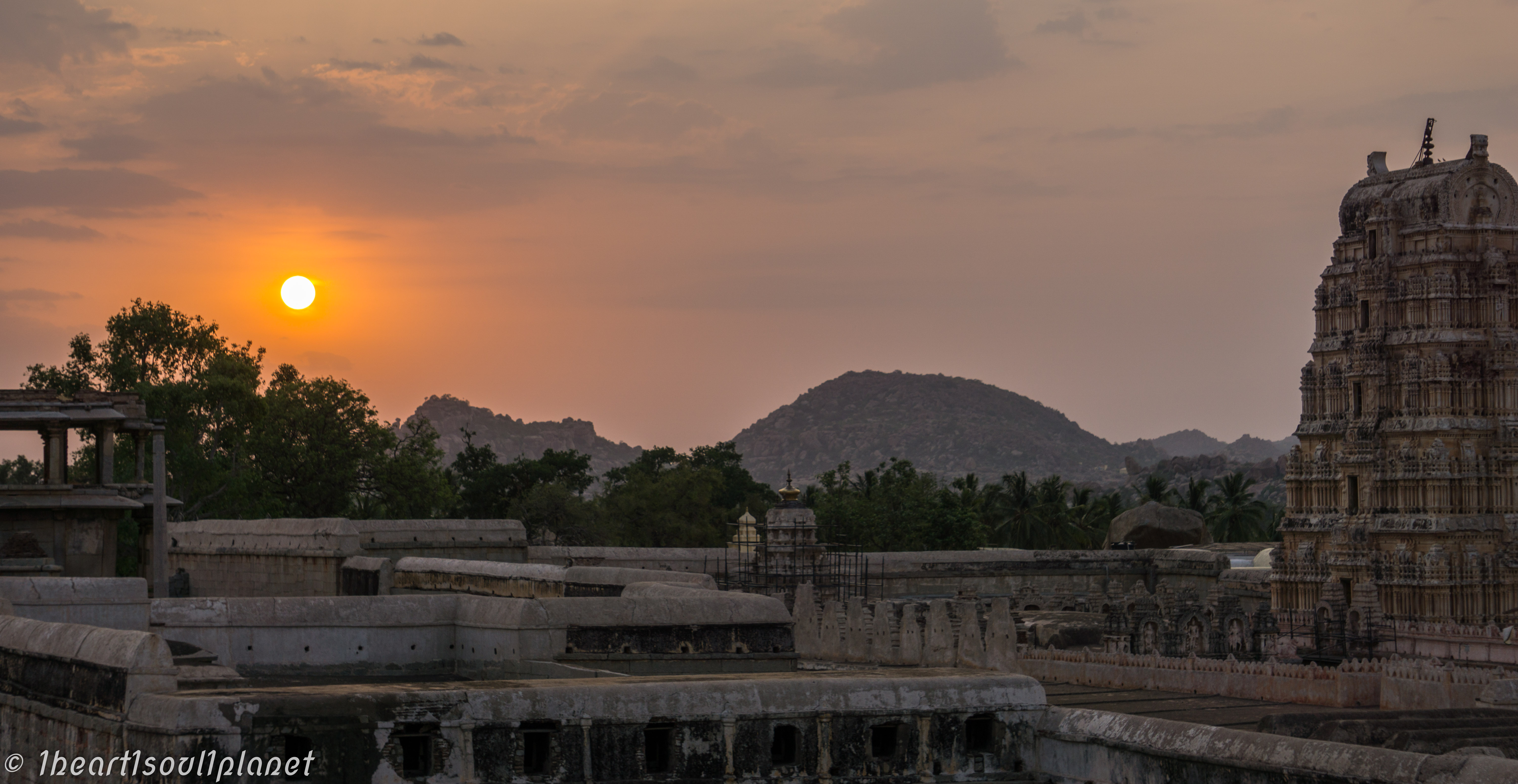 The next day was just as hot and we enjoyed the shade of a rooftop-restaurant, while reading Game of Thrones and sipping pineapple juice, until it was time to go back to the hill.
We found an amazing spot on top of a huge rock, where we spread our legs and relaxed- but only for a short time, since soon enough, we got called down by the security guards. We thought it was forbidden to be on that rock, but it turned out they just wanted to tell us not to use a tripod. We were confused by that notion and thought we’d misunderstood them, but again they told us that tripods were not allowed.
We think it’s because the government wants to secure its right of having the only professional pictures of the area. Shame, but well…
We used our small tripod instead and the gopro and hid both behind a rock, so the guards wouldn’t see. The new place we had to choose didn’t offer half as good a view as the one before, with electric cables hanging down between the ruins of the temples.
There were dozens of monkeys chasing each other through the pillars and rocks, though, and we enjoyed watching them until one of them threw a bottle of water at Nici and darted off. 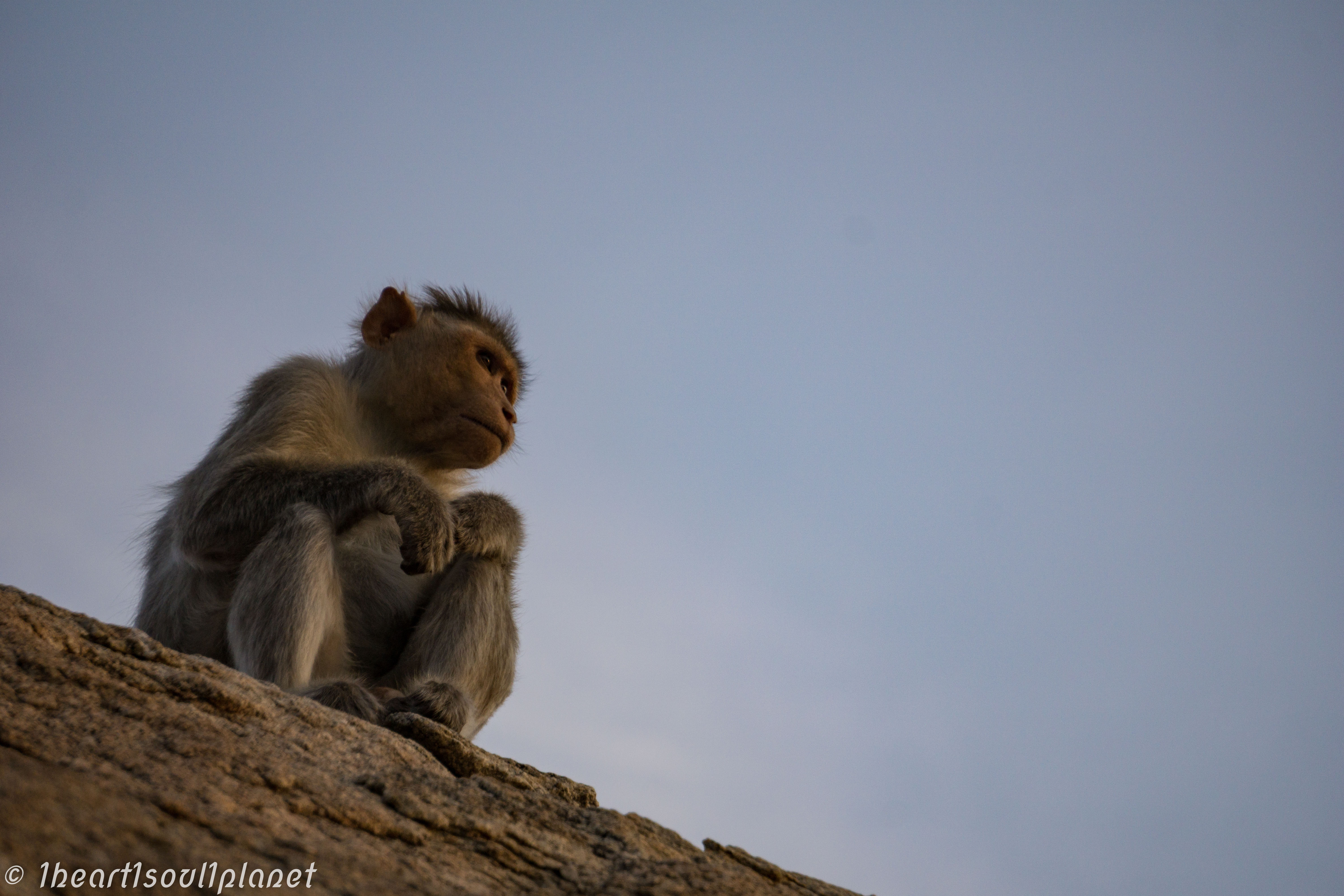 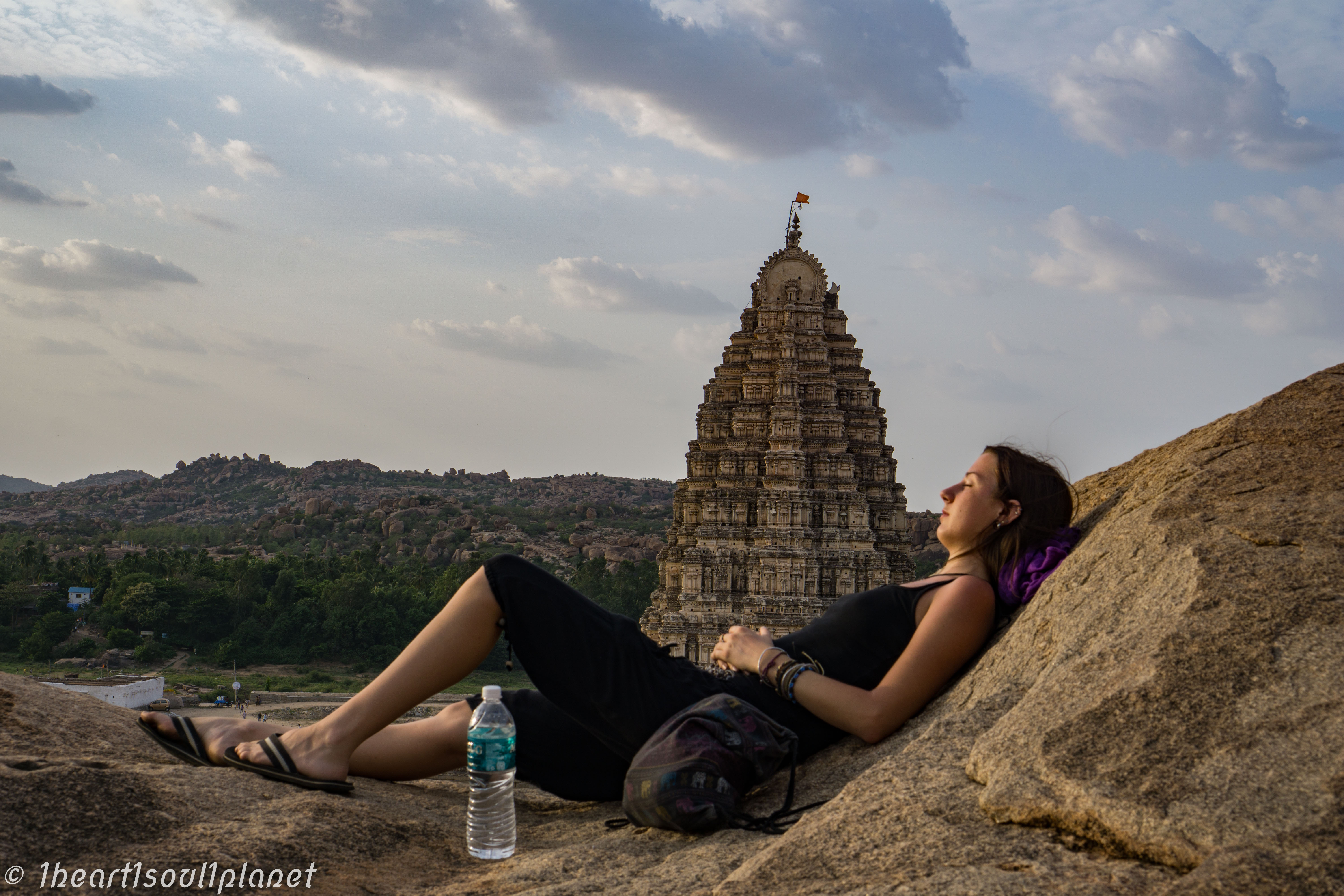 On the third day, we arranged for Aki to drive us around in his rickshaw. We saw more temples, more ruins, statues of goddesses and the queen’s bathhouse, but after a few hours already we were hungry and honestly, we’d seen enough, so we went back and relaxed.

Grown bored of the temples and ruins, we spent the last days in Hampi hiding from the sun in Ravi’s Rose rooftop-restaurant, where we enjoyed cheap but delicious food and did some more reading and writing.

Aki, our faithful rickshaw-driver, brought us to the train station in Hospet on the last evening. We said our goodbyes to the beautiful and holy town of Hampi, then we waited, feeling excited, for our first train ride in India… 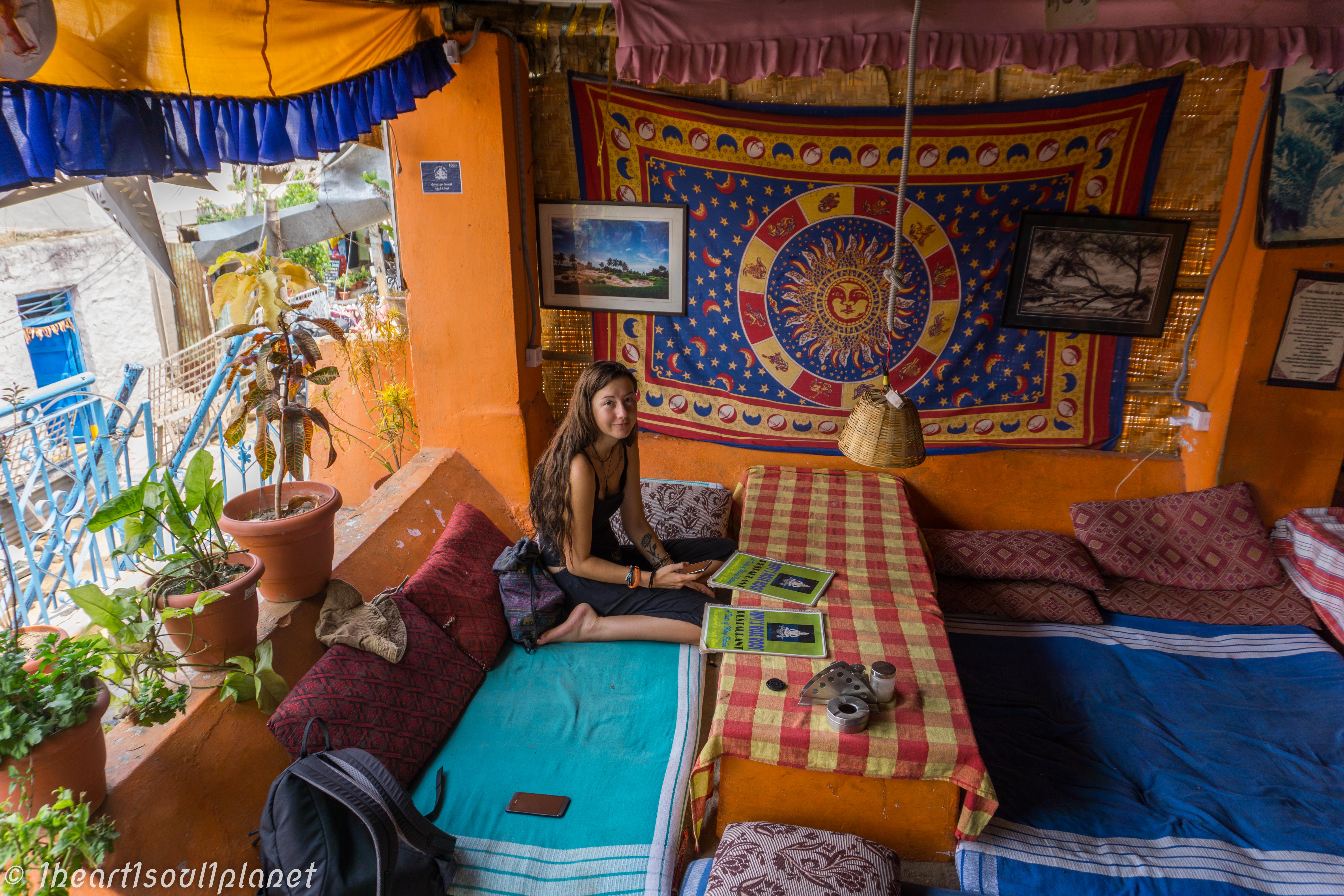 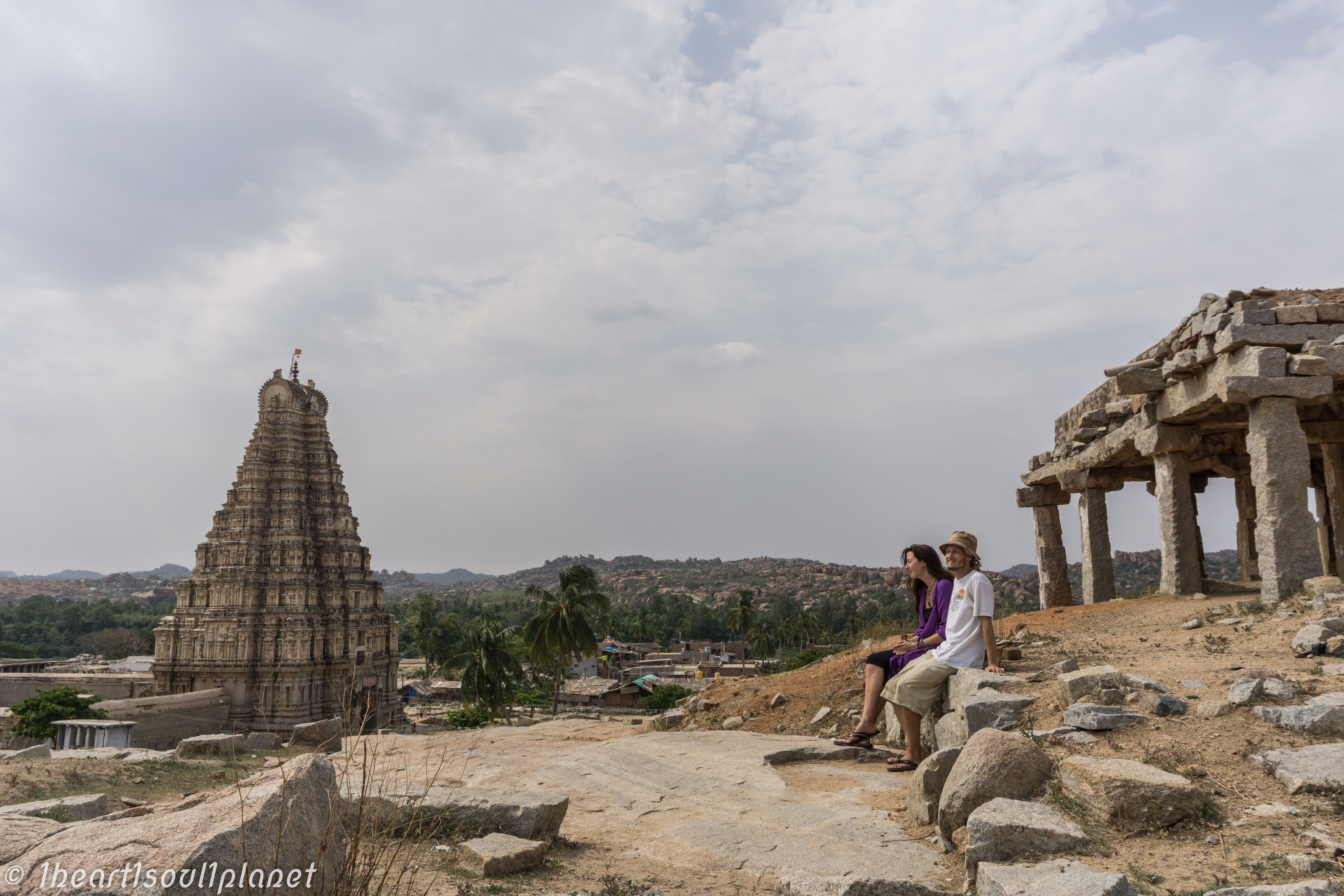