We were a bit sad to leave our friends in Mumbai behind, but at least equally excited to get our next chapter properly started!

When trying to book our further travel however, we learned that spontaneity doesn’t really work in India- that is if you’re eager to travel by train.
Travelling by train is a MUST in India, but it’s more complicated than we had anticipated.
First of all, you need to book weeks in advance and that is definitely not how we do things. Then you need an Indian credit card to buy the tickets, so we couldn’t do it ourselves.
Hence, we decided to travel by bus instead.

Buses are spontaneously bookable, but they’re more expensive than the trains. Well, honestly, it’s India… so we’re talking 15 dollars for a 12-hour trip instead of four or five dollars… We can live with that…

Anyway, we chose Paulo Travels and shared a bunk bed in a sleeper-bus. It was comfortable enough and the aircon was in a reasonable mode, so we didn’t feel too cold.

Our first destination in Goa was Calangute.
The small town welcomed us with rain but our guesthouse where we had booked in advance (Romaldo Guesthouse) wasn’t far. Our host was very friendly and told us that he lived in the USA and Australia for many years, so he knows about veganism and offered to assist us when we tried to order Indian food. He also offered to prepare a vegan breakfast, but with our sleeping habit…well…

Romaldo Guesthouse lies about 60 meters from the ocean and we spent the first two days in Calangute relaxing on the beach. We had bought a kindle in Dubai and were finally able to continue reading Game of Thrones.
Our unhealthy looking pale skin got a nice tan and we even managed to not get sunburned. 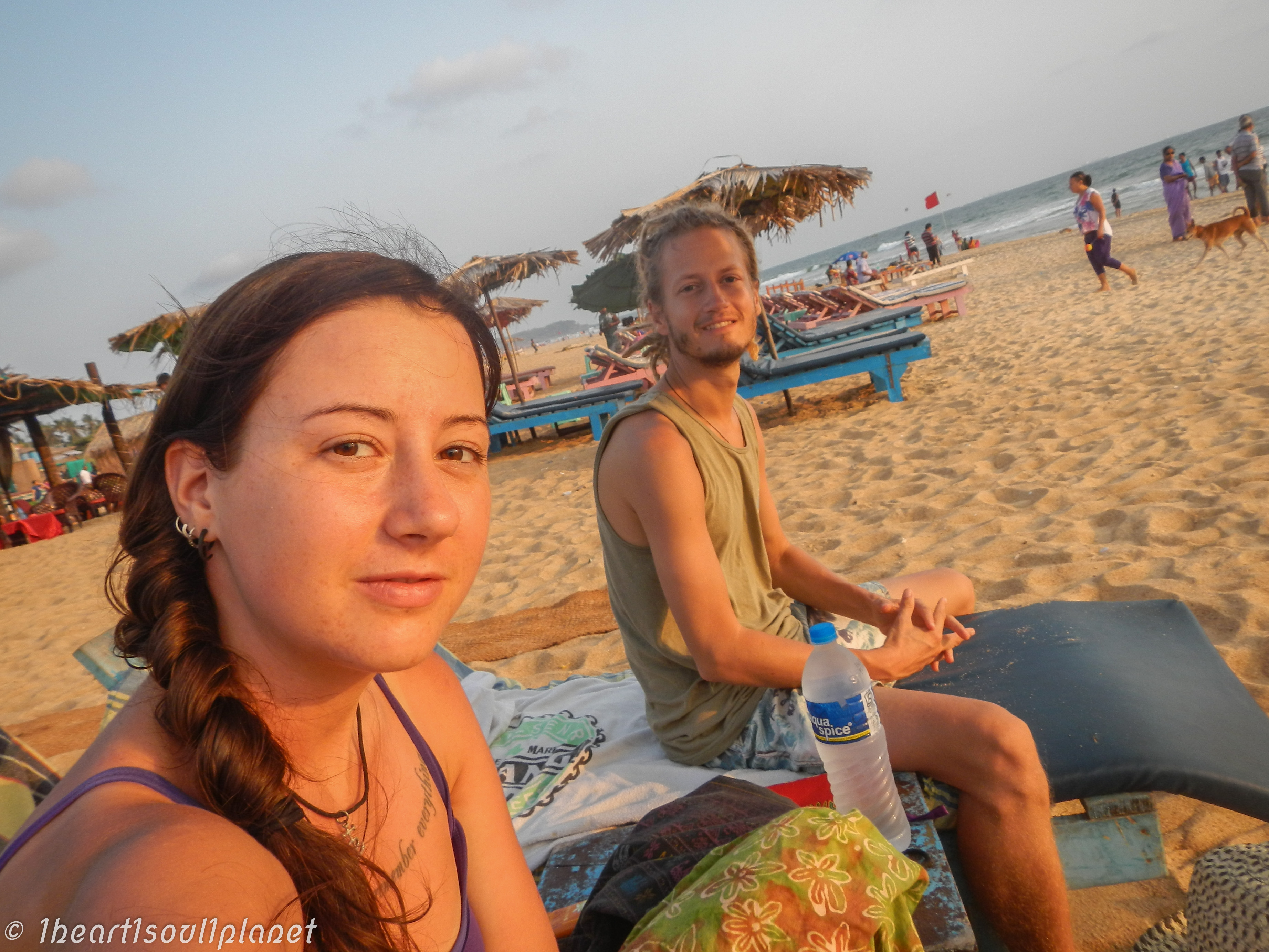 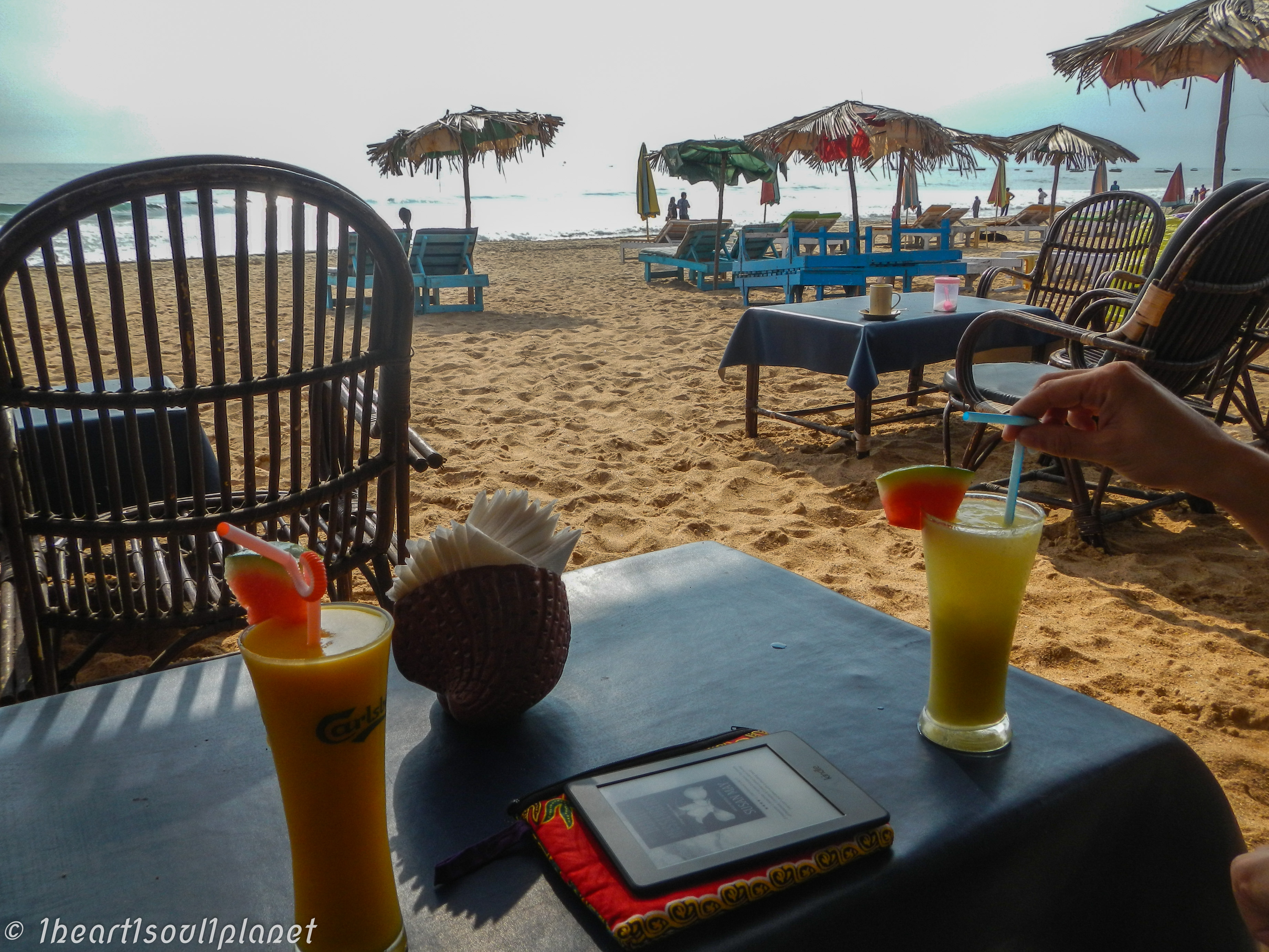 Since it’s low season, the area was as good as empty and most tourists were Indian and had probably come from more rural areas where they don’t often come across white people, so many asked us to take a picture. What was funny in the beginning, started to annoy us quite soon, especially because Nici felt uncomfortable taking pictures with random (male) strangers when wearing only a bikini, so we started to decline.

Men… that’s a topic with a big influence on our travel.
Before arriving in India, we had had many talks with travelers who had already been to India and it was always the same. All the men said: “It’s awesome, you’ll love it!” All the women said: “It’s a beautiful country, but… you have to be careful”
We also heard quite a lot of horror stories both in the news and also from travelers, so Nici was a bit suspicious about India.
We’re positively surprised so far, though there’s one thing that’s really annoying: The stares.
In Africa, people would look at us too, from time to time, that’s normal. It’s the same with tourists of different colors in Europe, they always get curious looks.
It’s not quite the same here, though. They literally stare and they don’t mind that we notice, they continue staring even when we stare back.
Some people even wait for us to catch a closer glimpse or follow us around. René doesn’t care but Nici feels uncomfortable, especially on the beach. Taking a bath becomes a show with quite a lot of spectators, so she often chose not to go swimming at all.
We don’t want to complain though, people are extremely friendly and we’re sure we’ll get used to being stared at after a while.

A big plus is the safety. It’s perceptibly safer here than in most countries in Africa.
Goa is used to tourists, so no one seems to care when we walk around with the camera hanging around our necks. 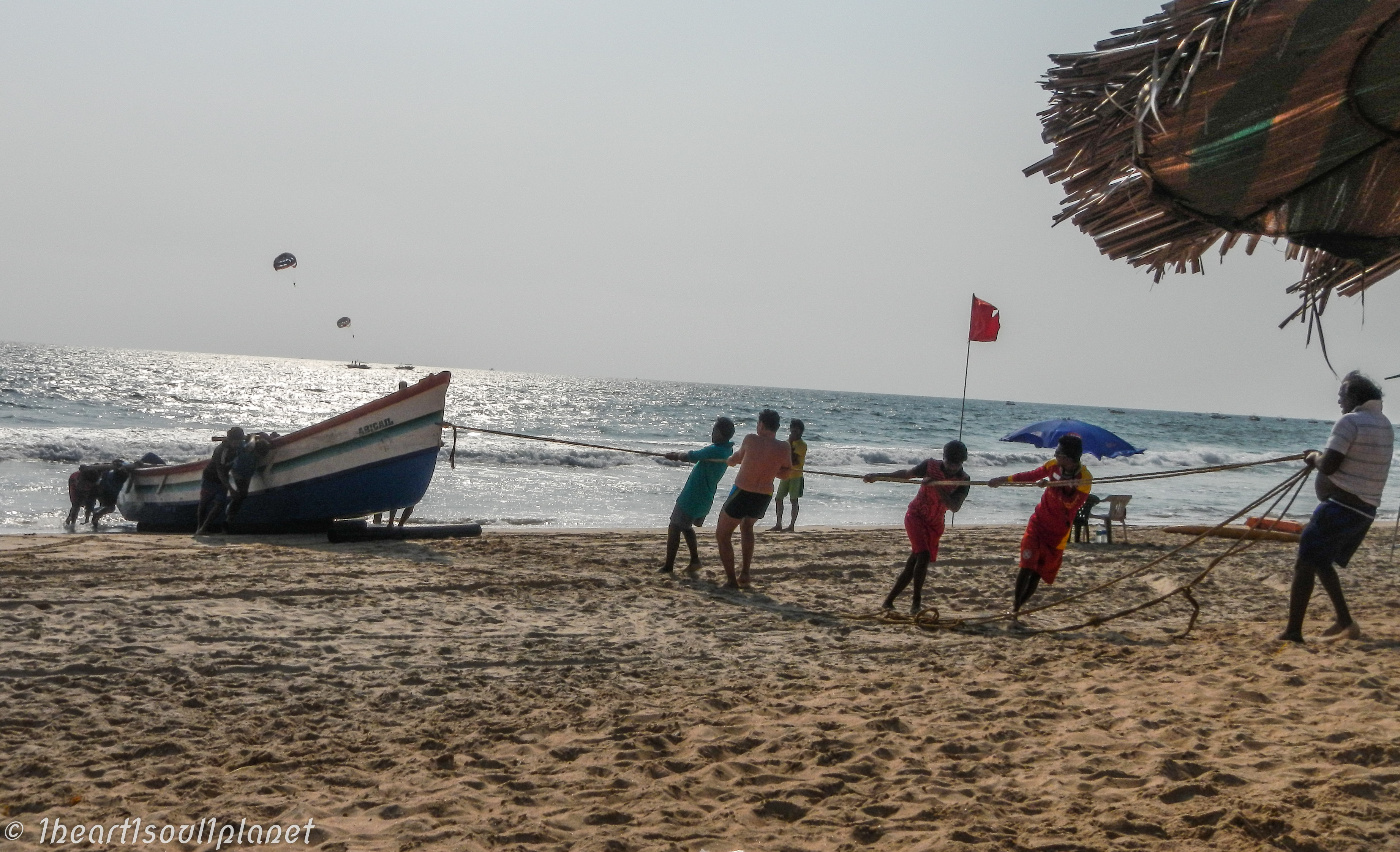 Anyway, there we were, feeling relaxed through and through after two days on the beach… and then Nici fell sick.
She got the same flu that René already had in Mumbai, so we enlengthened our stay in Romaldo’s Guesthouse.
Nici tried to recover in the room underneath the fan while René went out to stroll around the colorful and alternative-looking town with its markets and restaurants.
After six months of being together 24/7, splitting up for a couple of hours turned out to be a good idea, though we already missed each other after being apart for two hours.

After five days in Calangute, Nici had recovered enough to continue travelling.
Even though we loved Calangute, it had disappointed us food-wise. We thought India in general would be a paradise for vegans… but we were wrong. About a third of every menu is vegetarian, but apart from Dal Fry and one or two starters, everything contains dairy.
Whenever we order something that looked vegan, they put some cream on it as decoration. When we say “no dairy”, most waiters don’t understand it.
We decided to go to Vagator, because there was supposed to be a vegan restaurant called “bean me up”.

Thanks to low season, the restaurant turned out to be closed. We still stayed in Vagator for two nights and ate mostly western food in the mango tree restaurant. The beach wasn’t very nice, but we rented a scooter and enjoyed the freedom of driving around- something that reminded us of Thailand and our first vacation together in the Dominican Republic.
We drove up to a Portuguese Fort, where we took some pictures and enjoyed the view- but only for a short time, since it was extremely hot and we felt as if we were melting. 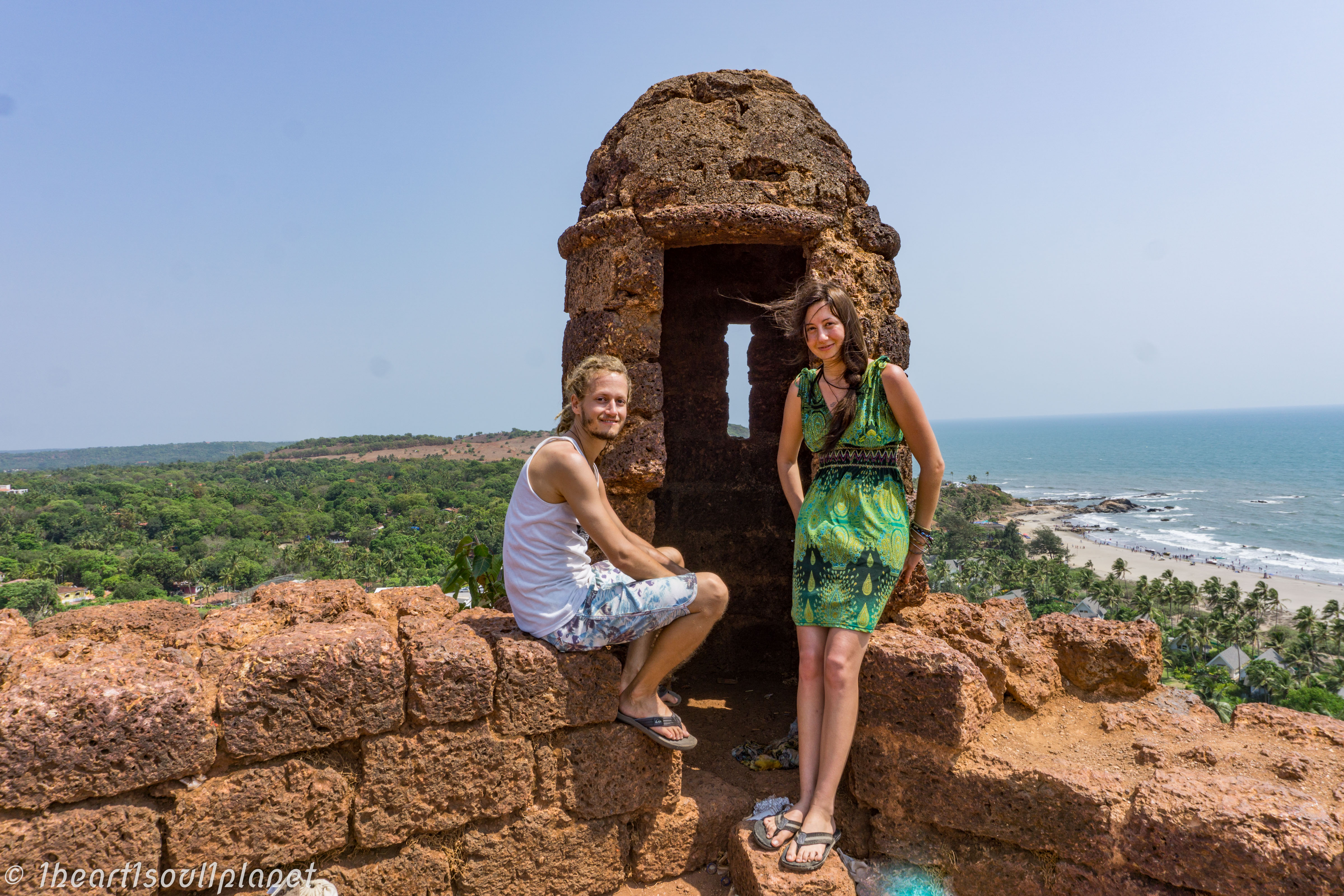 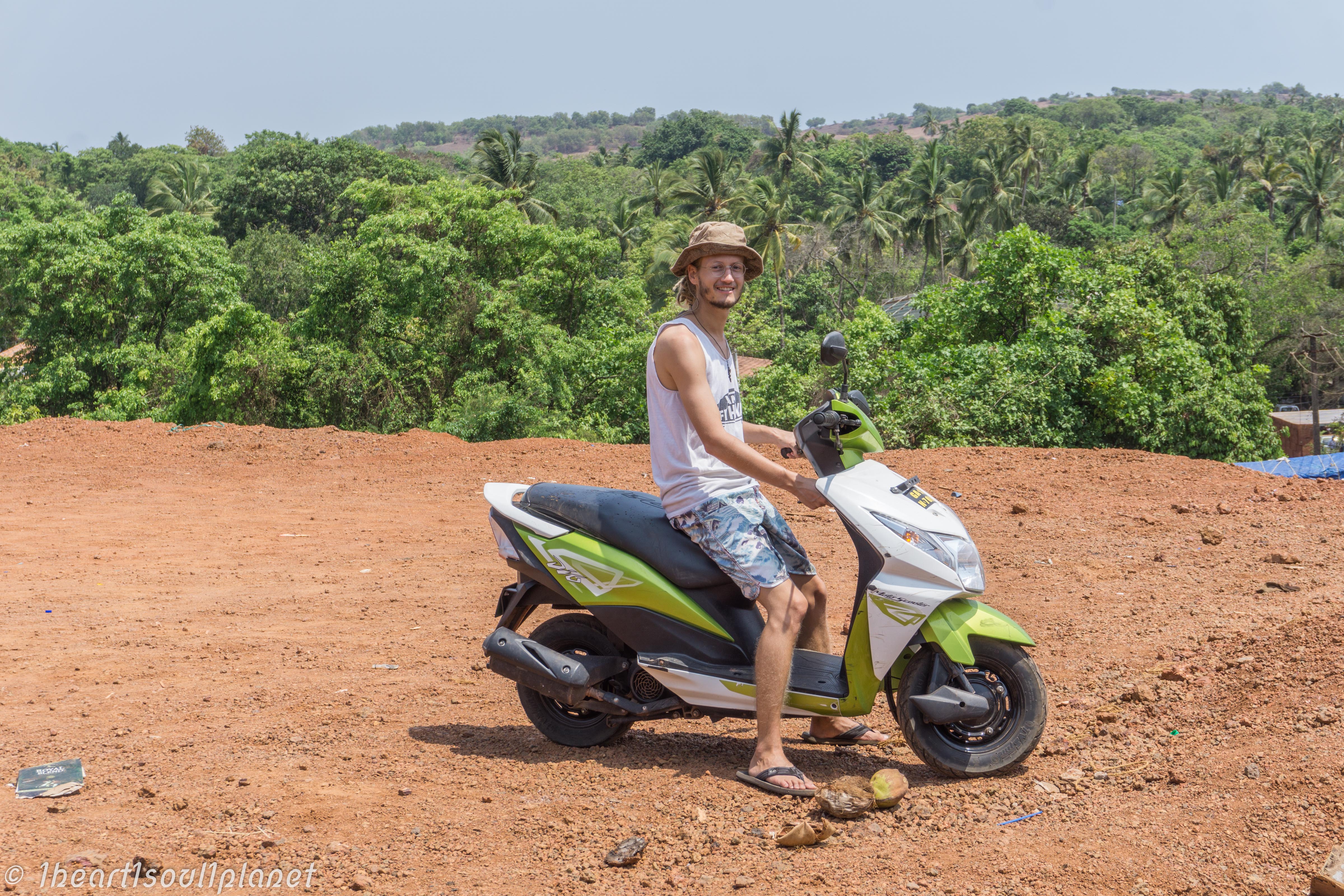 Nici enjoyed the markets a little bit too much and bought clothes that later turned out to be torn or discolored. Well, there’s a reason why they’re so cheap.

We didn’t know what else to do in Vagator, so we decided to travel south to Palolem.
The journey by bus would have required us to change bus four times, so we ended up taking a taxi and paying 2500 R (35 $).

In Palolem, we chose the summer hostel, which was close to the beach and offered free breakfast and free drinking water.
We went back to eating Indian food, but the portions served here are enormous! We ended up taking leftovers home after every meal.
The beach was very nice and vast and again, not too many people chose to hang out there during the day, because of the heat, so we enjoyed the tranquility.

Again, lying on the beach was about all we did, but what else was there? Most people come to Goa to party and we met some rather confused tourists in the streets who didn’t seem to be 100% present in this world. Call us boring, but we’d choose an unintoxicated beach-day over that anytime.
Especially, when you can watch the sun set the sky on fire as it disappears slowly behind the horizon… That’s colorful enough for our taste ;-) 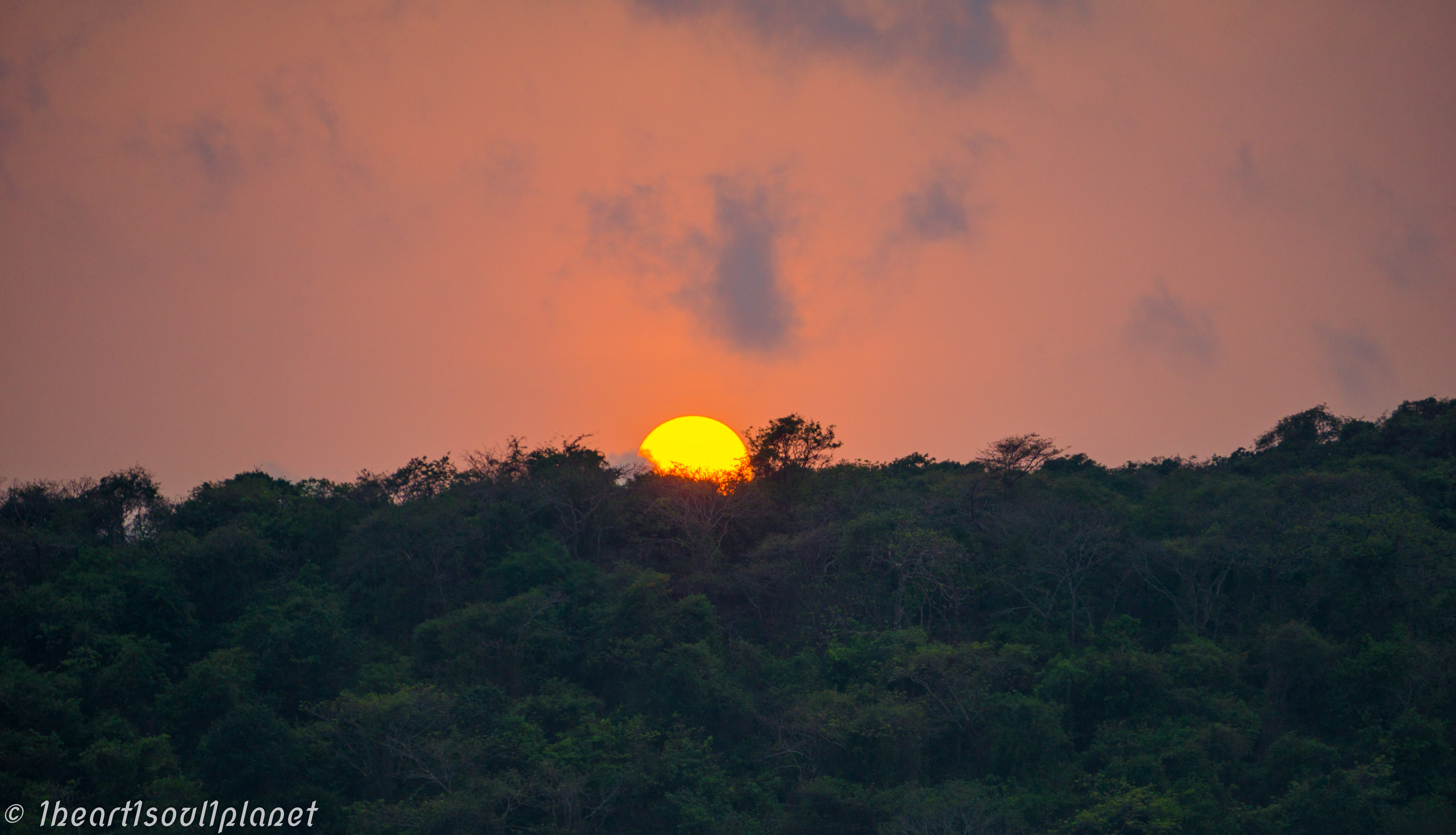 We’re looking forward to do some hiking again sometime, but right now it’s just too hot. Nici also wants to take some yoga lessons, but René’s not convinced yet…

All in all, Goa is amazing! The colorfully painted houses, the markets with their fabrics and sparkling jewelry, the palm trees aligning the vast beaches, the relaxed atmosphere… We enjoyed it all a lot and we’re extremely glad to have come here during the low season, because apparently, most areas are really loud and crowded during high season. Well, some people like it that way… we don’t…