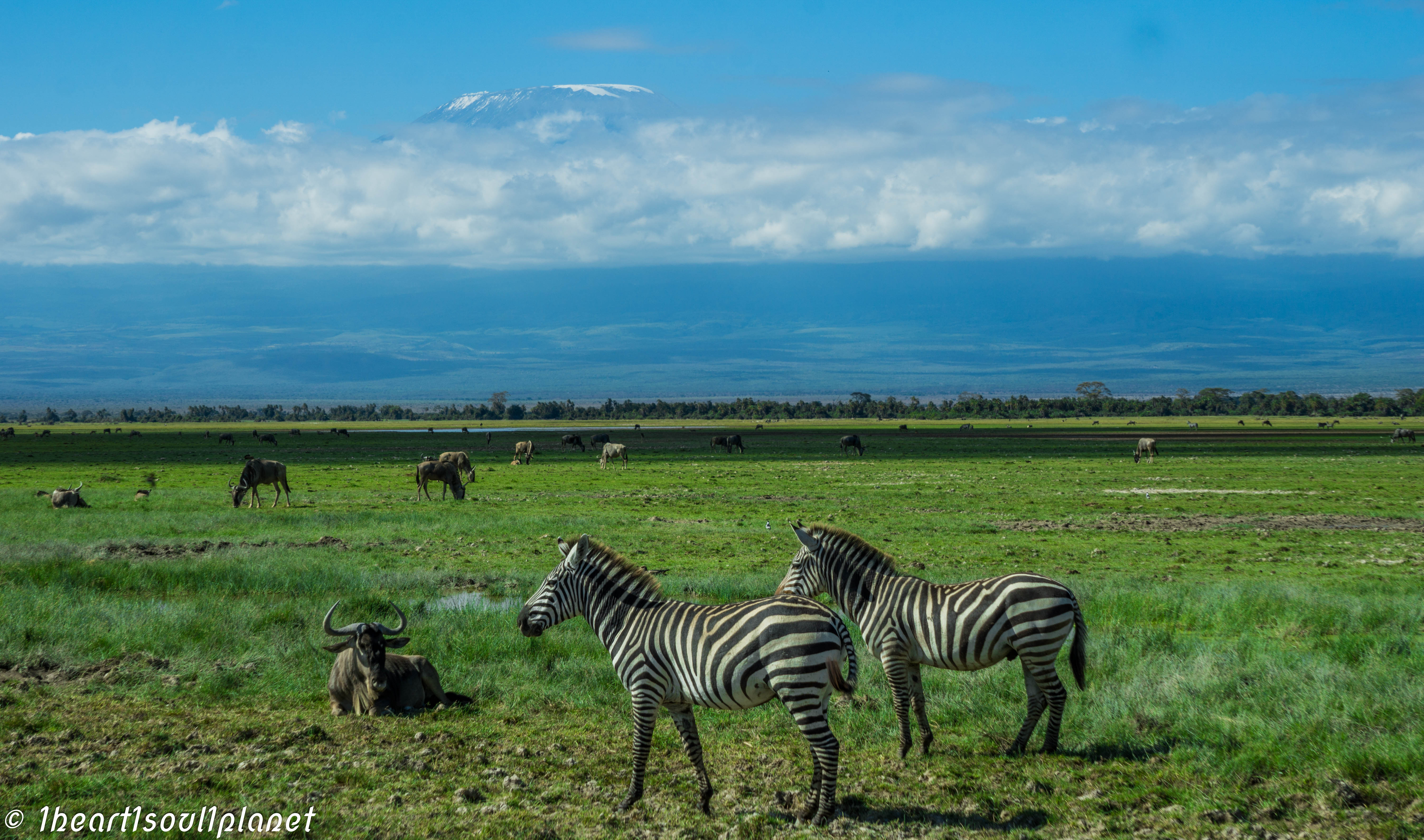 When we arrived at the immigration office on the Tanzanian side of Namanga, the officers asked us where we were going and we replied “to Namanga”.
They said: “You are in Namanga, so where are you going?”
We were a bit confused ourselves because we had thought Namanga lies only in Kenya, but the town spreads over the border. We had planned to stay in Namanga for a couple of days to visit Amboseli National Park, but apparently that’s not too common, so we ended up saying we’re going to Nairobi to avoid further confusions.
On the Kenyan side, we were asked if we got the yellow fever vaccination- which we have, but we were surprised nonetheless that they actually controlled it.
Anyway, the lady at immigration was very nice but also concerned because we hadn’t planned anything yet, so after selling us the East Africa-Visa, she introduced us to a friend of hers who does tours and game-drives for tourists.
His name is Stanley and we got along well, he showed us a cheap but comfortable guesthouse and we booked two nights there, then we decided to go on a game-drive with him for only 50 dollars per person.

The next day, Stanley picked us up before sunrise and even bought snacks for us, since we had falsely believed there would be restaurants in Amboseli National Park. There aren’t.
The game-drive was wonderful! We were actually not even really interested in seeing animals, we mostly wanted to see Mt. Kilimanjaro to take those “extremely African pictures” with animals and the mountain in the background.
We ended up seeing lots of animals though and were even lucky enough to see the top of Kilimanjaro, which is rather seldom during rainy season, because it’s usually covered by clouds. The clouds did cover it- but only after we had already taken our pictures…
We saw lots of animals and very close by the road. The area was very moist and the ground was covered with water, so we were able to watch herds of elephants bathing and zebras and wildebeests with their babies and since there aren’t many predators left in Amboseli, the herds were huge!
At noon, we went to a viewpoint to eat lunch and watched hippos grazing in the shallow lakes below.

At the end of the day, we were tired, but satisfied and were able to tick off Mt. Kilimanjaro from our bucket list- even if we hadn’t climbed it.

The next day, we took a matatu (minibus taxi) to Nairobi and from there we took an UBER (yes, Uber is finally available again!) to Imara Daima, where we had booked an Airbnb-room. Our hosts were Irene and her family and they welcomed us very warmly to their home. We were a bit exhausted from travelling and still a bit weak after our food poisoning, so we were really glad to finally have a nice room, with a nice bed and great wifi for a change!

The first day was spent filling out the visa-forms for India, then we enjoyed the weekend watching Netflix and sleeping and on Monday, we went to a copy shop to print our forms and flight-tickets and on Tuesday, we finally got to go to the embassy of India.

They have a very interesting schedule and visa applications are only accepted from 9.30am to 11.30am.
However, when we got there, the staff told us we needed an appointment, which we had to schedule online first and also, that our pictures weren’t the right size.
Disappointed and annoyed, we went to get the right pictures and then we visited an internet-café, falsely hoping we would be able to schedule an appointment for the same day, but it turned out the waiting list was quite long and the next available date was April the 13th, so almost 2 weeks later. That was not what we had anticipated, since we still wanted to visit Uganda and Rwanda as well. Well, there was nothing we could do about it, so we booked the appointment and went back to our apartment.

Even with our changed plans, we (or at least Nici) couldn’t really complain, because we really needed a break from travelling and we ended up spending most of the ten days until our appointment watching Netflix and Nici continued writing her book while René even caught some Pokémon.

On April the 6th however, our friend Sina arrived in Nairobi and we went to pick her up from the airport along with Irene’s sister, who also lives in Switzerland and flew to Kenya for a visit. Sina stayed with us for three days and we got a break from doing nothing.

On her first day in Nairobi, we all went to town (by train for only 40 KSH, about 0.40 dollars), but pretty soon found out that there’s nothing to do in Nairobi, so we ended up drinking tea in a restaurant and then we went to eat Chinese food.
On Saturday, however, Stanley drove all the way from Namanga to Nairobi and did a game-drive with us through Nairobi National Park - Sina’s first safari experience :-)
Aaand we all got lucky!
We saw no elephants this time, but lots of water buffalos and even four lions, one crossed the road right in front of us!

Nici caught a cold during the game-drive and so we spent Sina’s last day in Nairobi in the apartment, playing cards, but that was very nice as well.
She then left for Namibia and we were back to chillaxing.

Nici’s cold was very persistent and apart from occasional walks to the closest food-market, we stayed inside all day long and lost our tan…

The day of our appointment came though and we were quite nervous, when we entered the High Commission of India.
Turned out we had to get a ticket with a number despite our scheduled appointment and we ended up waiting 4 hours until it was finally our turn.
Lots of people before us were getting rejected and we almost lost our hope.

When it was finally our turn, the guy told us right away that we couldn’t get the visa here and that we had to apply for the electronic visa.
We said the electronic visa was only for one month and that that wasn’t enough for us. He then said we could get it for two months, but that also was not enough.
We were very persistent and ended up actually bargaining for the visa and in the end- who would have thought- the man started smiling and agreed to give us the visas (though only single entry… well, no Nepal then). He also told Nici to get married as soon as possible, or René might suddenly leave. (something that’s apparently quite common in Africa)

The process was supposed to take another ten days and we realized that there was no way we could visit Rwanda and Uganda, so we decided to only go to Uganda- as soon as we’d have our visas (which we were still not sure would work out).

René desperately needed a break from doing nothing, so we decided to go to Naivasha on April the 20th and booked two nights in the Fisherman’s Camp right next to Lake Naivasha.
We got lucky on the first evening there and saw a hippo grazing very close to us! 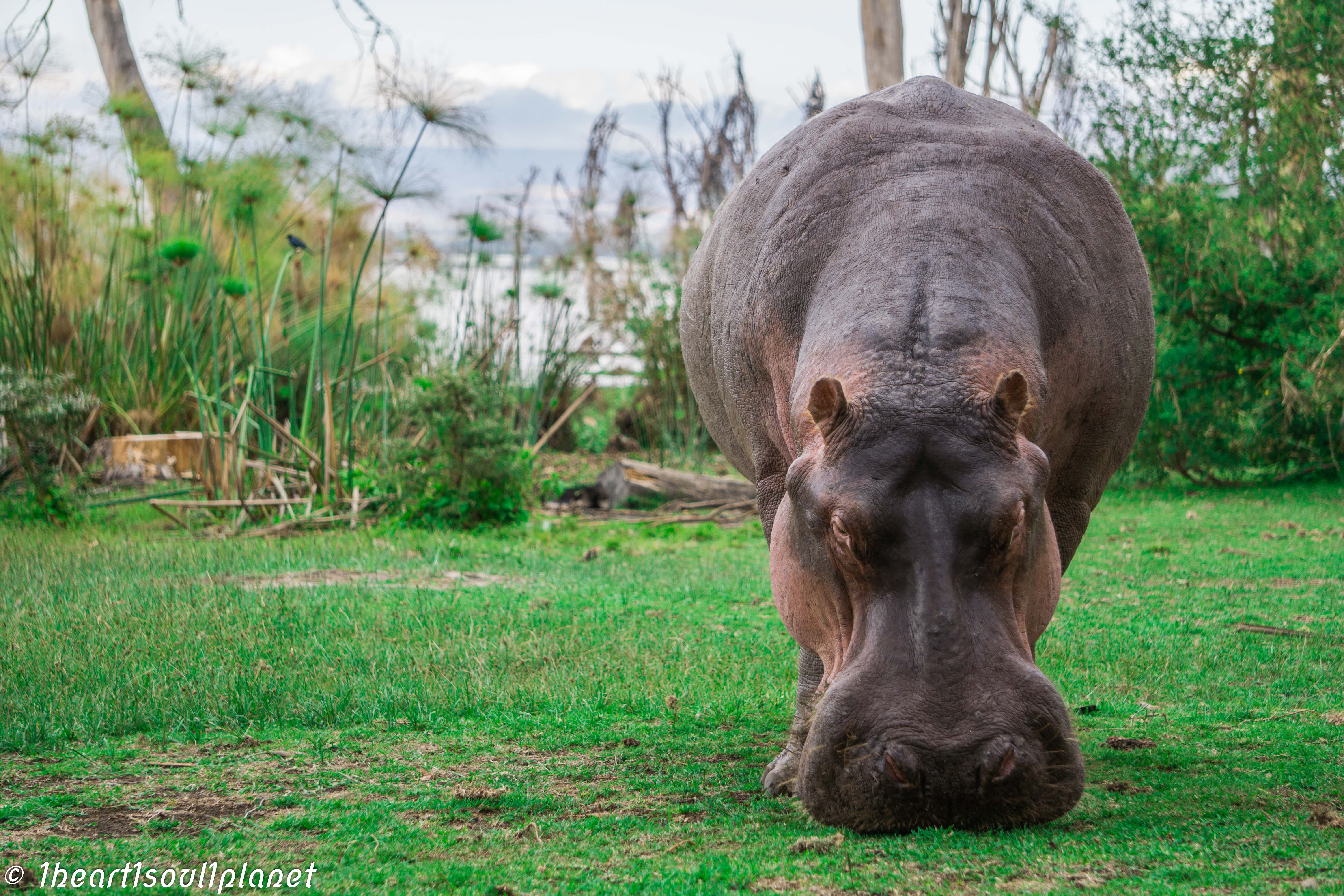 On Friday the 21st, we rented two bicycles and drove through Hell’s Gate National Park. After weeks of doing nothing, we felt very unfit and after a day of riding our bikes we were quite exhausted.
The day was wonderful though! We saw giraffes, zebras, buffalos (riding a bike through a herd of buffalos definitely gives you an adrenalin-rush), Impalas and to René’s delight, lots and lots of warthogs!
Apart from a few leopards, there aren’t any predators in Hell’s Gate, so the herbivores are quite relaxed and the herds are big.
When we reached Hell’s Gate Gorge, we booked a hike for 2000 KSH (20 dollars) and enjoyed walking and climbing through the gorge where Tomb Raider was filmed. (We haven’t seen the movie though)

The highlight of our day was when we stopped at a bench to stretch our exhausted legs and were immediately surrounded by adorable rock hyraxes! They were very friendly and even jumped on our laps and we instantly fell in love with them!

The next day, we went back to Nairobi (with aching butts) and spent a day relaxing before picking up our visas at the Indian embassy on the 24th.
And yes: it worked!
We got our visas!

Now we hope the night bus will bring us safely to Kampala, Uganda and that we will be lucky enough to see the gorillas… 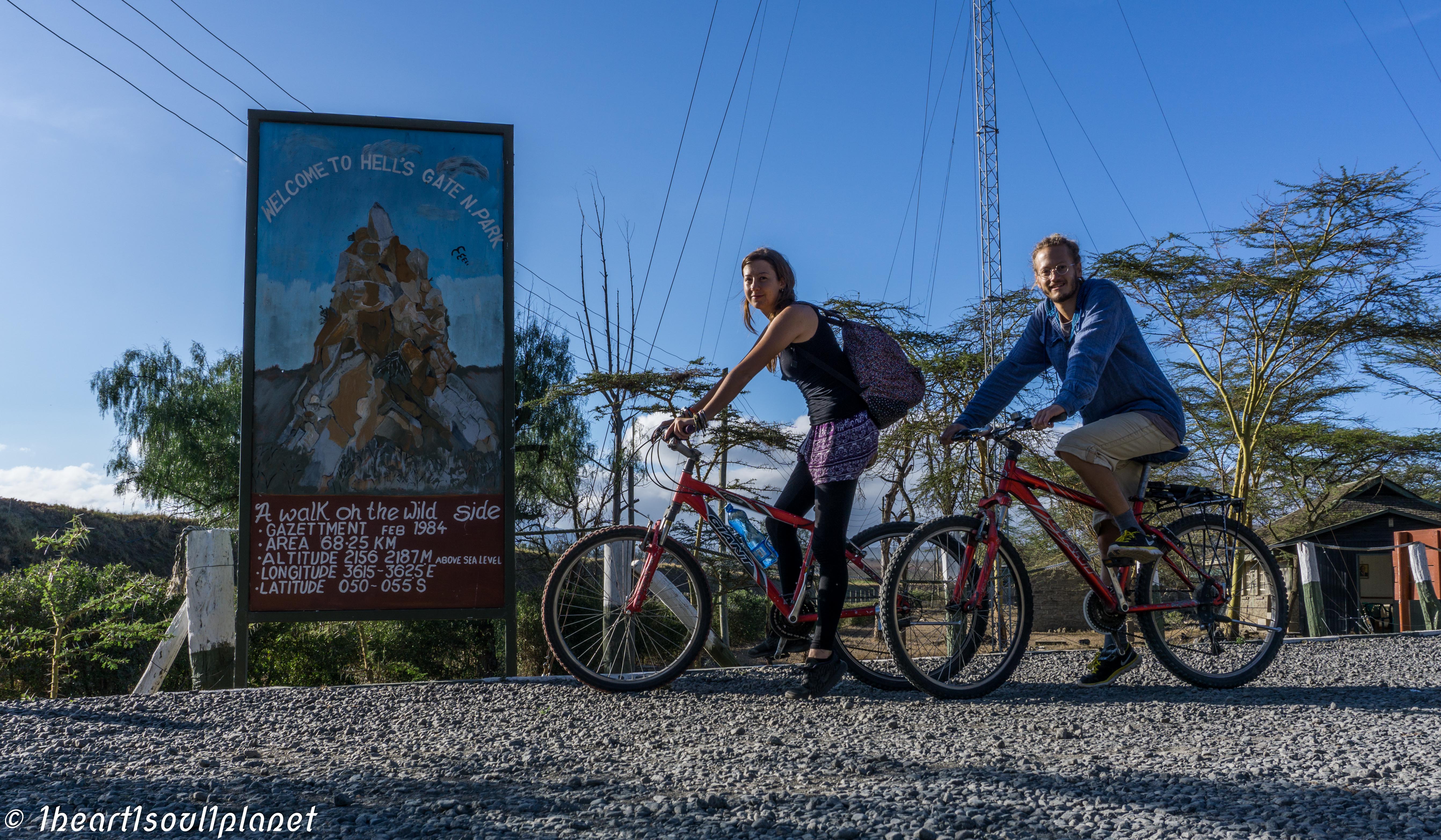