Another day in paradise 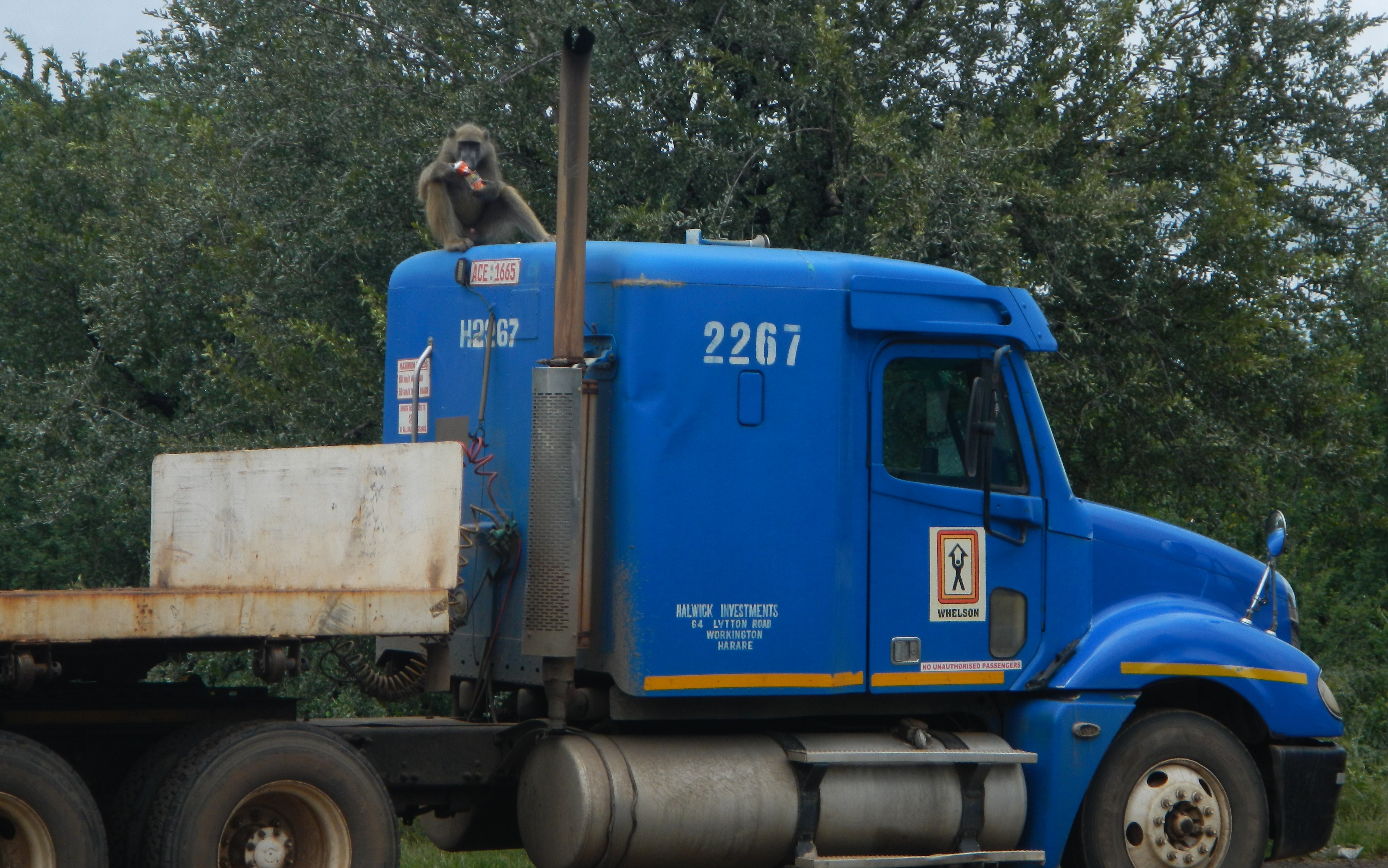 We crossed the border to Zambia by taking a taxi across the bridge. The visa was more expensive than the one for Zimbabwe (50$ instead of 30$), but again, crossing the border was easy.
Two huge baboons didn’t seem to like it, that we photographed them drinking from a soda-can…
They ran towards us, but were scared away by helpful locals… We would have managed to scare them away ourselves- probably- since we still know some tricks from our walking trail in the Kruger Park ;-)

A very friendly taxi-driver drove us to the Jollyboys-Backpackers in Livingstone, and told us about his life and the country while driving, which was very interesting.
The Jollyboys was about as awesome, as the Shoestrings, but even better organized and totally green. (They recycle everything, even compost, and run on solar energy)
We had to keep it short though and only booked one night… a shame!
At least we were able to be part of the movie-night, which apparently takes place every Sunday evening, and we got free popcorn! Yay!
This time, we slept in a dorm and we met two nice women and got some great travel-tips from them.
That afternoon, we went shopping for groceries and to buy a bus ticket for the next day.
A Rasta-guy greeted us on the way (one of many, since in Zambia, the Rasta-movement still seems to be big) and showed us around in town.
We then bought two paintings from him, to support the local Rasta-movement, which mostly “fights” for human rights and the environment.
He told us about his part in the group and that he doesn’t care much about the religious aspects- that he rather promotes love for all creatures and the planet and doesn’t like missionaries- no matter of which religion.
Guess we’re on the same page then!
Of about twenty Rasta-guys we saw, perhaps two had dreadlocks. Several guys also told us, that more and more people promote not smoking cannabis- another stereotype that is still widely spread.
René gets asked to buy weed all the time because of his hair, no matter if in Europe, Africa or Asia.
We got the impression, that many members want the movement to fit better in our society, to attract more people for the good causes.

Anyway, we bought our bus tickets to Lusaka for 140 Kwacha per person (about 14 USD) and boarded the bus at 9am, the next morning.
The ride was long, but okay.
We saw a lot of Zambia, even if only from the bus window, but we were able to buy some food from locals along the way.

Lusaka turned out to be way bigger than we had expected, but other than Windhoek and Johannesburg for example, it was more vibrant and colorful. There are markets everywhere, the streets are crowded with people and the atmosphere is great.

We stayed one night at the Kalulu Backpackers- in our tent, this time with the mattress we had bought from our friends in the Shoestrings in Zimbabwe. We had to move our tent underneath a roof though, because there was another rainstorm.
Sean, the manager of the hostel, was extremely friendly and organized everything for our further travel- he reserved the bus tickets for us, organized a taxi, asked the manager of Dean’s hill view lodge in Chipata to pick us up from the bus station and gave us tips for Malawi.
The bus ride took longer than expected, but again we enjoyed the view from the bus window ;-)
Zambia is very green right now and very fertile. There’s corn fields everywhere, but unlike the ones in Europe, they’re not all square and there’s trees right in the fields. It reminded us a bit of the Hobbit-land in ‘lord of the rings’.
Again, we bought food on the way.
We had been wondering before, why nuts are so incredibly expensive in Africa, a very small package usually costs about 10 USD at the supermarket!
However, in Zambia, people are selling peanuts on the street, so we decided to buy from them.
Nici got out of the bus and asked a woman with a big bag of peanuts, how much they cost.
The woman said 10 Kwacha (about 1 USD) and when Nici asked “for how many peanuts?”, the woman gave her the whole big bag, which was about 2,5 kilograms!!
We never wanted to eat so much, but who says No to 2,5 kilos of peanuts for only 1 dollar?
We shared them with the other passengers in the bus, but we still have a huge amount left…
They’re totally fresh, by the way, not like the ones we know in Europe, which are roasted or dried.
The ones we got are soft inside and taste differently, but very delicious…

Dean’s hill view lodge turned out to be a very nice place, looking a bit more like a backpacker’s, than a usual lodge.
We chose a chalet for only 250 Kwacha instead of camping, because it was raining- AGAIN!
The next morning (before catching the Zambia-Malawi bus to Lilongwe) we had a very interesting chat with the guys of Dean’s hill view lodge and then we were a bit late to catch the bus, which was supposed to leave from Chipata at noon, but in the end, we had to wait 2 hours at the bus station, because there was some incident and something had to be repaired…
Good for us, though! 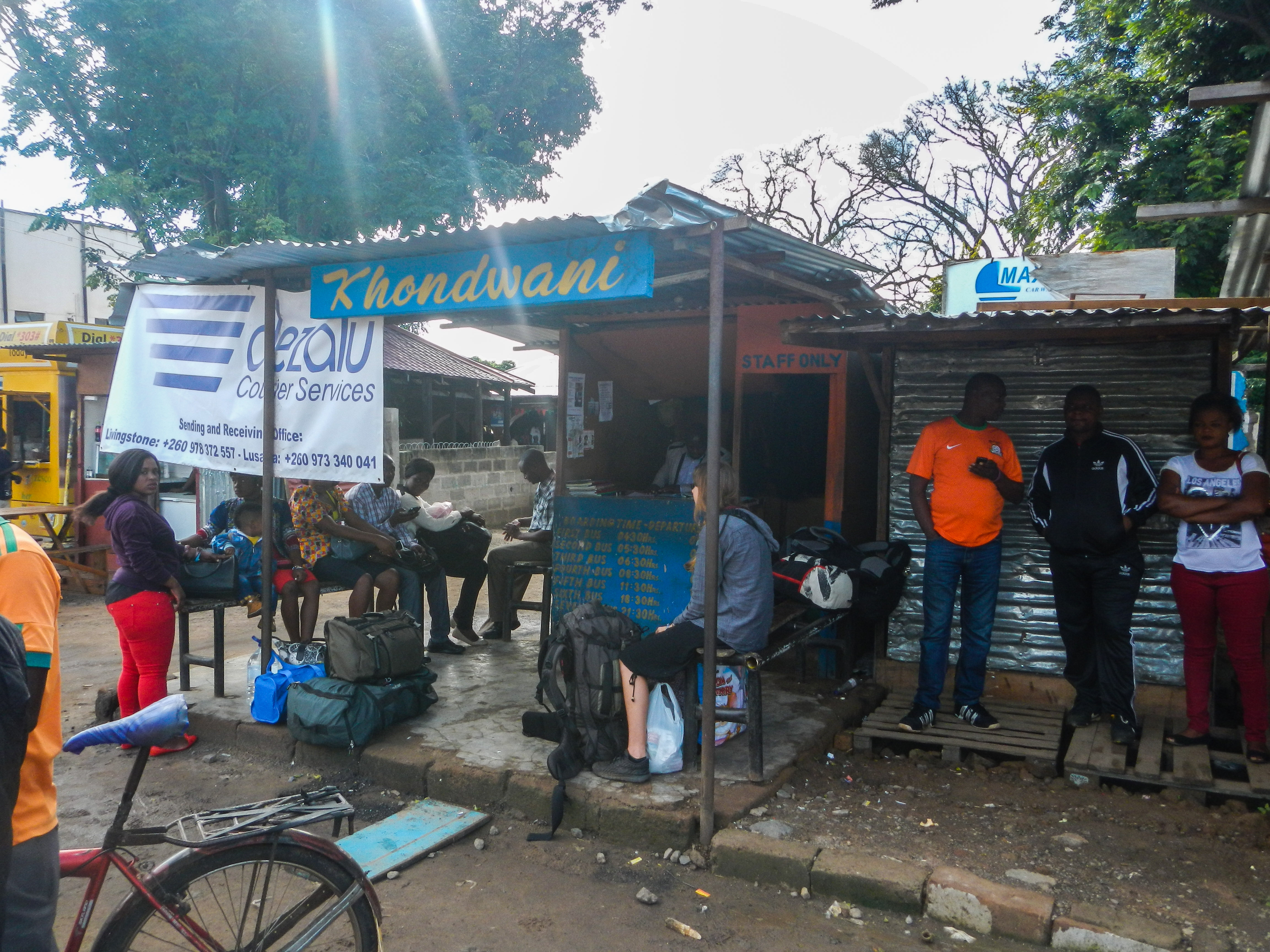