Binge-watching Dexter for three days (and nights) helped us cope with our unwanted desert-adventure.
Then our new car got delivered by the rental company and the old one got picked up.
We could’ve spent some more days just lying around but we only had 2 weeks in Namibia and had to make the best of it, so we continued our journey.

Thanks to our accident, we got another chance to see the seal colony at cape cross- we’d driven by the last time without finding it.
Locals didn’t seem to like the seals too much, they said the stink is almost unbearable. We laughed at that, because we thought they smell a bit fishy- not more.
We were wrong… the stink was unbelievable! It stuck to our clothes for days and we couldn’t get it out of the car either. But we enjoyed our visit a lot! There were hundreds of baby seals and the adult ones are very adorable as well =) 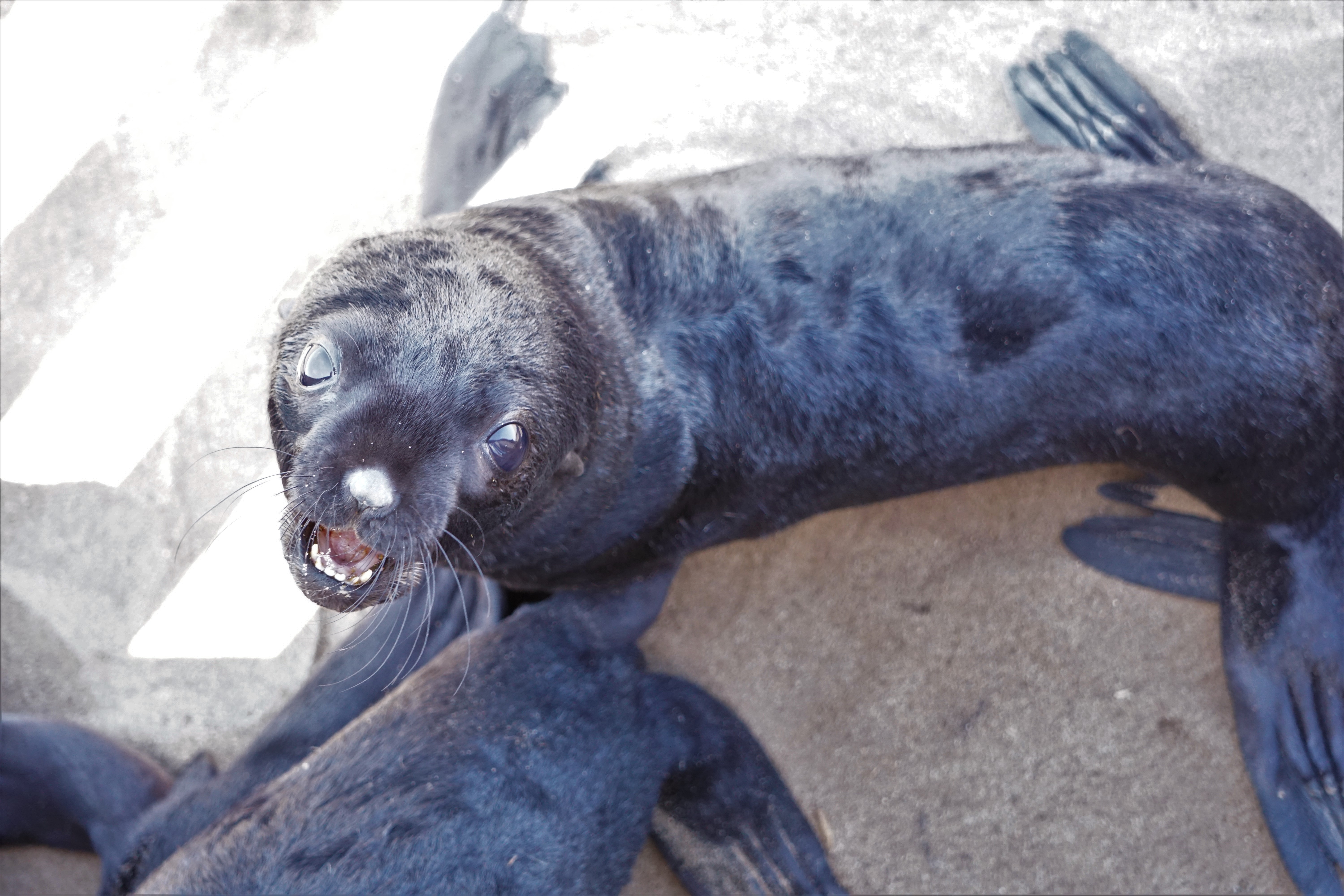 We didn’t take our chances with the Skeleton Coast again. Instead, we decided to drive to Brandberg. The roads were even worse than the ones on the Skeleton Coast and our back tires started to slip even at 60km/h, so it took us a long time to reach our destination.
At least we got there without another accident and we booked two nights at the Brandberg White Lady Lodge, where we celebrated René’s birthday with red wine and a bonfire underneath the beautiful starry sky. Since the campsite lies in the middle of the desert and not many people were camping there, we enjoyed some privacy. 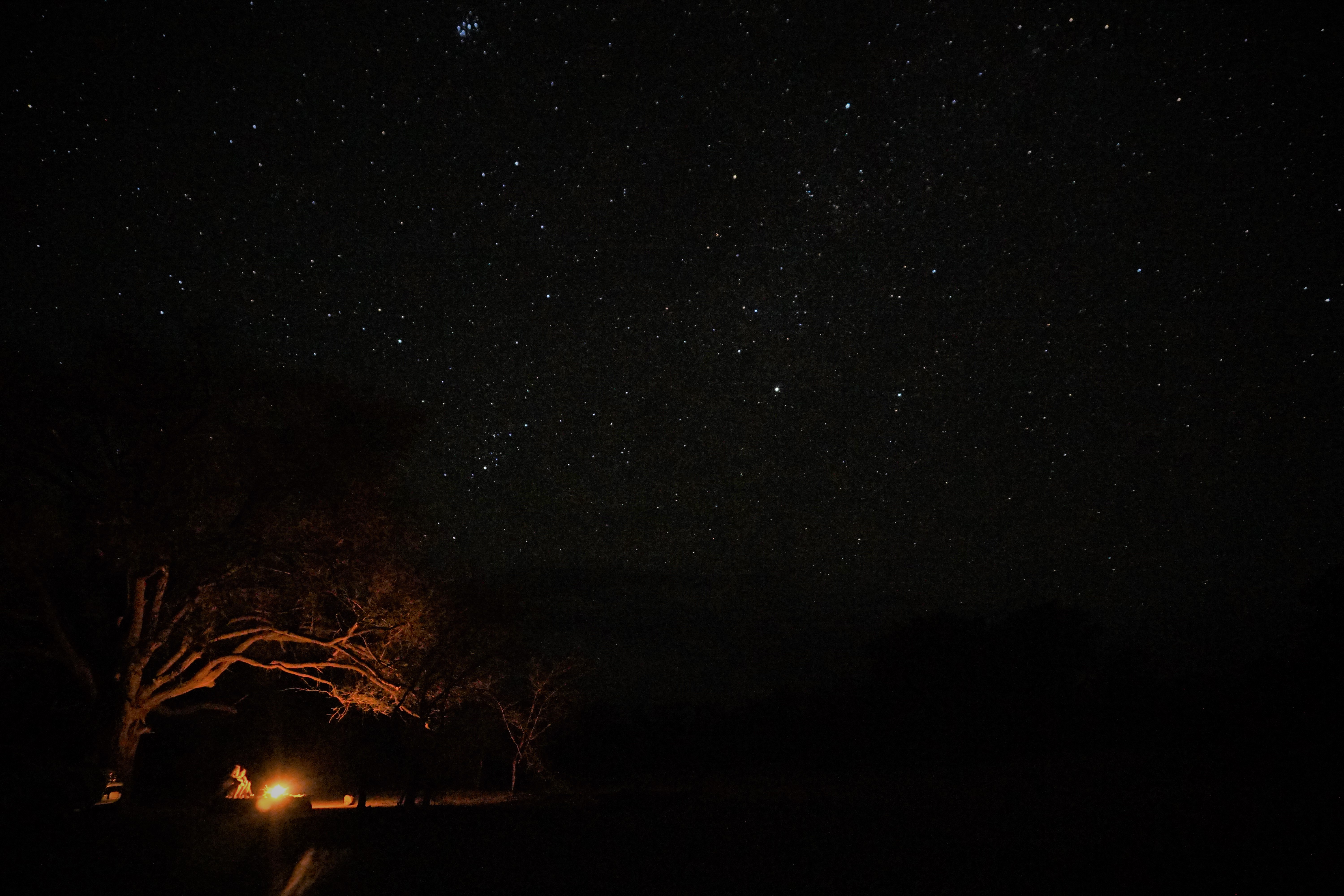 We realized however, that the three days spent in Henties Bay made it impossible to continue our original plan. We had to decide whether we wanted to skip the Etosha National Park or the Fish River Canyon in the South.
Since we’d already visited the Kruger Park, we chose the Fish River Canyon and drove back to Swakopmund, where we stayed at the same Backpackers, as before.
We visited Dune 7 near Walvis Bay and climbed on top, which was really challenging… It was a great feeling to stand on top of a Dune though :) 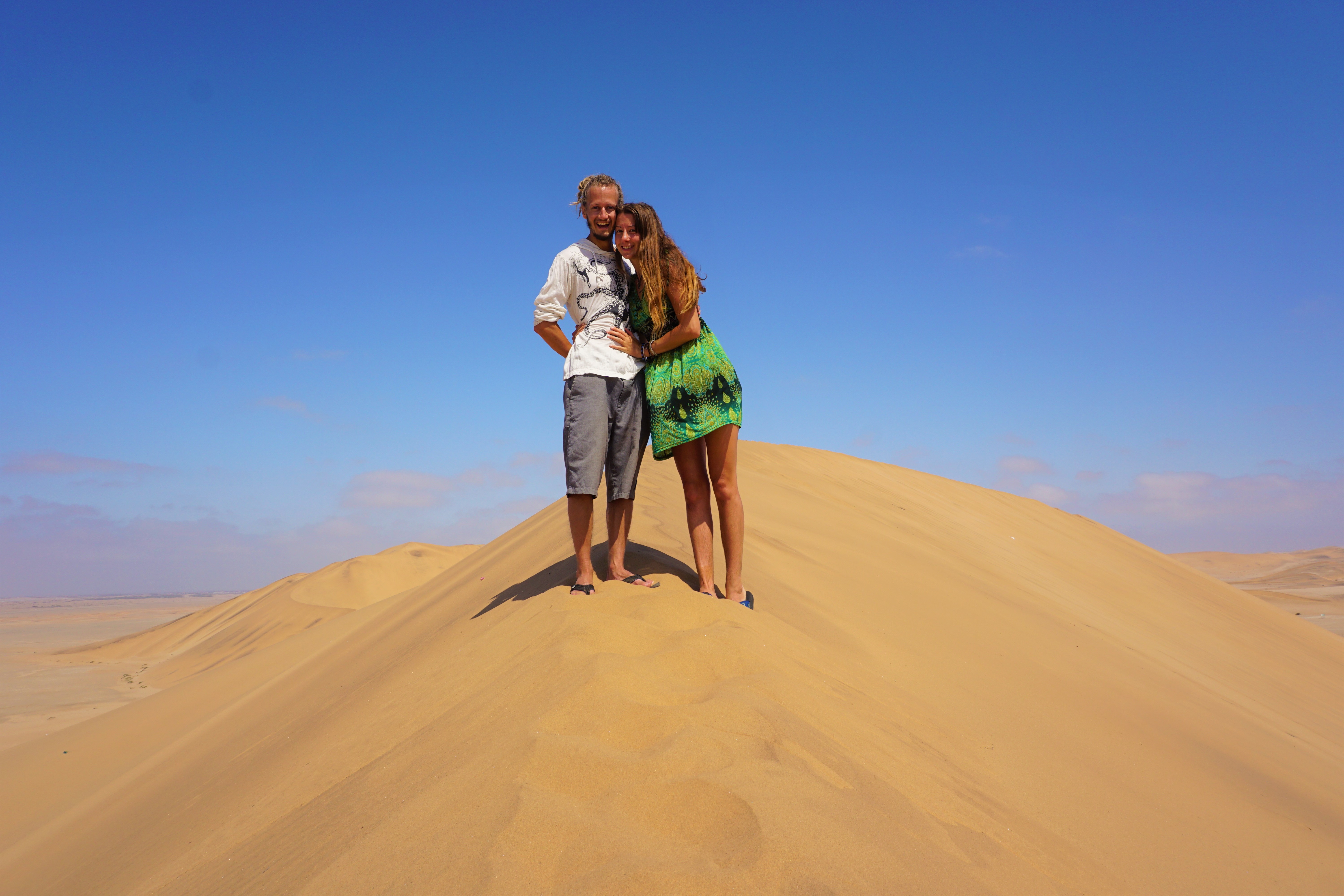 We also wanted to see the red dunes, so we drove to Sossusvlei. But it took us way longer than expected and when we were there, we didn’t have enough time to drive to Dune 45. The campsite where we spent one night was very beautiful and there were antelopes roaming around :)

The next day too was mainly spent in our car… distances in Namibia are incredible! René (the driver) never complained though ;)
We arrived in Lüderitz in the evening and found a nice Backpackers for one night. There we met two elderly French travelers, one of the two is 81 years old! He spends his senior years travelling the world with his dog… What a great thing to do after your retirement!

We had been looking forward to the Ghost town in Lüderitz, but it didn’t look too interesting from the outside and we were supposed to pay 170 N$ for a tour but we didn’t have time for that and there were so many other tourists that the feeling was far from ghostly, so we skipped it.
That was a good decision, since that day too was spent in the car until we reached the Fish River Canyon.
What an amazing place!! It is said that the Fish River Canyon is the second largest Canyon- after the Grand Canyon.
It has existed for hundreds of millions of years- since the southern continents were still together as one: Gondwana.
Over the years it got deeper, as the Fish River cut its way through the ground. The view from the edge truly is amazing!

Although it would’ve been tempting to enjoy a sundowner at the canyon, we drove back north to find a campsite. Driving at night was too risky. 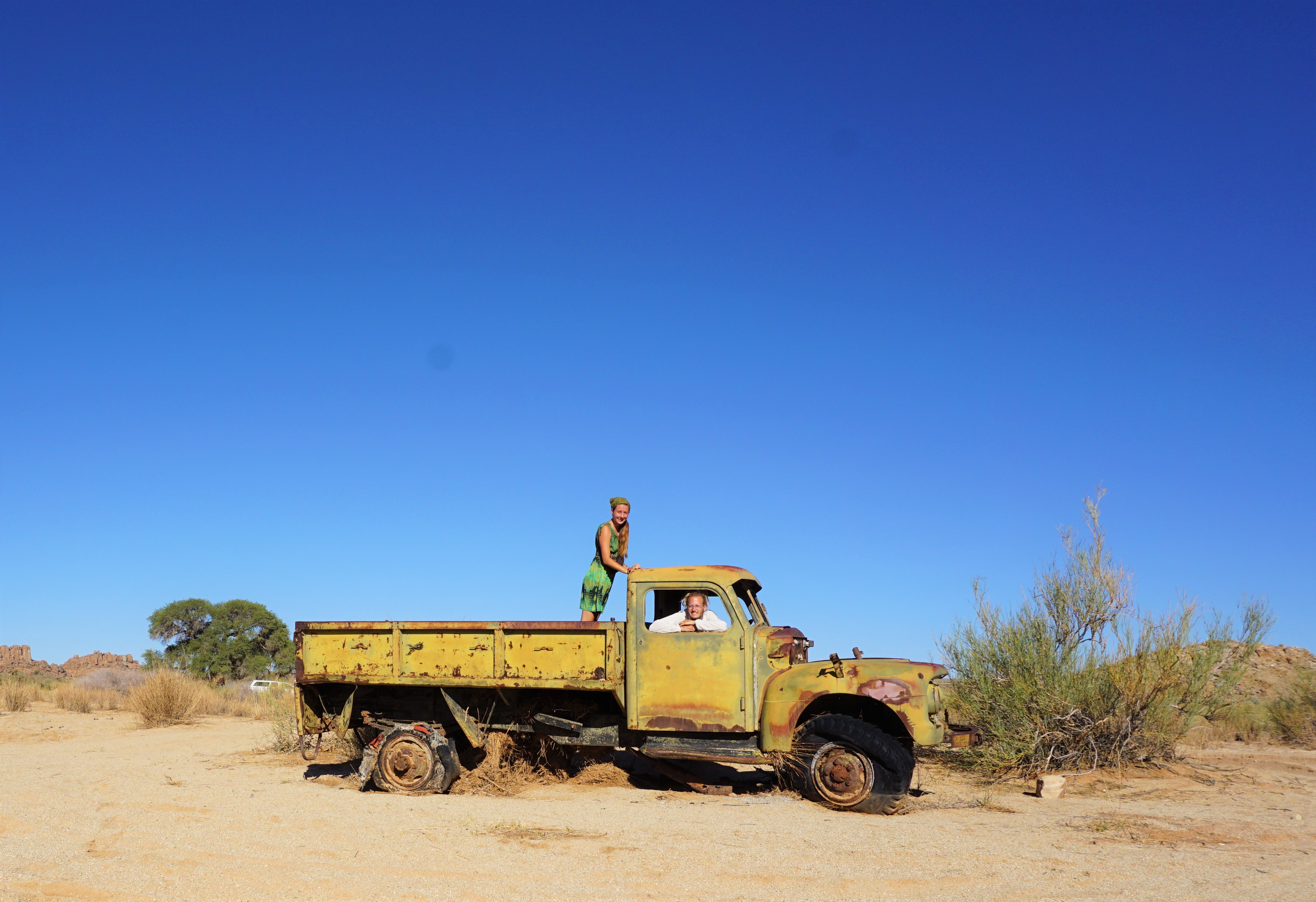 The next day, we drove back to Windhoek and booked three nights at the Backpacker Unite hostel. We still had our car for two more days, so we enjoyed our last nights on our comfortable camping mattress. We’re glad that our roadtrip is over, but we will miss sleeping in our car!

There was no time to relax since we had to work through our to-do list, which included filling out an Indian visa application form and booking our flight to Mumbai.
We also had to finish our 3 liter tank of red wine, which was not as fun as it may sound…

By the way, it was really hard to find our bus to Botswana… We were told that there’s only one bus that goes over the border, but no one knew the name of it and we couldn’t find anything online. Later we found out, that the bus only departs on Fridays and Sundays at 6am from Windhoek. We went to a tourist information but they had no idea what we were talking about.
The second tourist information where we sought help, knew vaguely that there was a bus but they didn’t have the name or number. Luckily, an elderly german man came through the door and heard us talking. He had just taken that bus some weeks ago, so he gave us the name and the location of the departure :)

So this morning at 5am, we waited for our taxi to pick us up but it didn’t show… we got really worried and started walking, hoping that we would reach the bus in time on foot, but again we got lucky and found another taxi and the driver even knew where the bus was waiting.

More about Botswana, and what happened with the visa application in our next blogpost :)


Now for those who ever want to travel from Windhoek to Gaborone (or the other way):
The bus company is called AT & T Monnakgotla Transport. Tel 3938788, cell 72111250 Tickets are sold directly in the bus and cost 440 N$ per person. The bus always leaves on time!
Departure is 6am in Windhoek, ask a taxi driver for the exact location… and by the way, you can hop on and off along the route.