Everybody loves Cape Town… the thing is, we don’t like cities in general.
Cape Town however managed to make us fall in love- not with the city but with its surroundings.

Our roadtrip had mainly led us though rural areas and we hadn’t visited cities like Durban or Port Elizabeth at all. So we weren’t used to having a lot of people around.
We like quiet areas with not too many humans anyway, so we had booked an Airbnb room in Klein Slangkop- a district that lies about 45 minutes (by car) away from Cape Town.

It was a good decision! Our place was only a 4min walk away from the beach- Long Beach, to be precise, and it couldn’t have been calmer.
Our host was about René’s age and it turned out we had a lot in common, so we had some nice chats and drinks together.

On January 4th, we had to give back our beloved “Iggy” at the airport. Byebye comfort, hello living out of a backpack (again).
We found it a bit annoying that Uber taxis are not allowed at the airport, so we either had to take a bus or a normal taxi. Of course we took the bus, since it was cheaper, but even that cost us R90 each- just to go to the city center.
The crowds and the noise in the city were too much for us and we decided to go back to Klein Slangkop without having looked at anything.
After checking a map, we realized that there was a train going to Fish Hoek, which was close to where we were staying.
We bought a ticket for only R9 each (!) and boarded the train. It looked quite comfortable inside, but that was only because we had boarded the first class unintentionally. We only realized that the second time we took the train.
Anyways, the train didn’t move. At all.
We didn’t know what to expect for that price, so we just waited patiently. Only when the other passengers started to get nervous, we realized that it wasn’t normal. Not a single train had left the station, and we had already been sitting there for an hour.
Finally, the speaker announced something, but all it said was that all trains were delayed due to “faulty points” at Cape Town station. No one had an idea what that was supposed to mean.
From time to time, some people would get off the train and others would get in, apparently some thought that one of the other trains would leave the station sooner. It was quite entertaining to watch passengers hurry out of the wagon and back in again, while others were running through the train station.
Many got off to take a taxi instead, but we knew that the second we got off, the train would start moving and we would feel stupid, so we stayed.
After 2 hours (!) our train finally left the station, only to stop again in the middle of nowhere. This time it only took about 15 minutes, until it started to move again.
Everyone was really annoyed- except us. We’re only on vacation and didn’t have to be anywhere. When at last everything seemed to be working again, we were really happy that we had taken the train- the route is incredibly beautiful! It leads along the beach and the sun was just setting above the ocean… imagine that being your daily way to work and back!

The way from Cape Town to Fish Hoek took 1 hour. Taking an Uber back to our Airbnb took another 20 minutes. But then we were “home” at last and had a well-deserved drink.

Western Cape had greeted us with a whole lot of wind and that didn’t change during the 6 days and nights we stayed in Klein Slangkop.
It was too windy to just relax on the beach (unless you like the taste of sand in your mouth) and the water was way too cold to go swimming, but thanks to that there weren’t that many people there- which is great if you want to take some nice pictures of the ocean :)
The wind gave us a headache and a cold each… and one day, it blew down our tripod while we were trying to take a picture together. Murphy’s law says what can go wrong, will go wrong and so our camera landed precisely lens forward on a rock- and the glass and some other parts fell out.
There’s even a small hole in the glass :(

Back in our room, René tried to find a store with Sony lenses online, but apparently, they only sell Canon and Nikon products in South Africa- and all the neighbor countries.
So, he tried to fix the lens instead and surprisingly it kind of worked.
Kind of? Well, the camera still takes pictures and you can’t see the hole on the photos, even zooming still works. But the camera makes weird sounds and we have to always be careful not to lose the glass again.

The first couple of days were used to organize our further travel and update our website, but we also found time to watch Dexter and cook delicious dinners with the veggie products from Fry’s Family, which we had found in a Checker’s Hyper nearby.

When we finally left the house again, we hitchhiked twice (once in the back of a pick-up), then took a minibus taxi (R8 per person) to Fish Hoek and from there we took the train to Simon’s town, where the African penguins live :)
This time we boarded the second class and the difference was obvious, there were only hard benches to sit on.
In Simon’s town, we wanted to save even more money and decided to walk to Boulder’s Beach, instead of taking another minibus taxi.
Walking took us only about 30 minutes and gave us the opportunity to look at the beautiful houses in Simon’s town.

To visit the penguins, we had to pay R70 per person. To protect these animals, some parts of the beach had been declared a nature reserve. The penguins are free to go wherever they want, but they choose to remain in the nature reserve, for obvious reasons. The number of visitors was very high. That’s understandable, who does NOT want to see those cute little penguins? 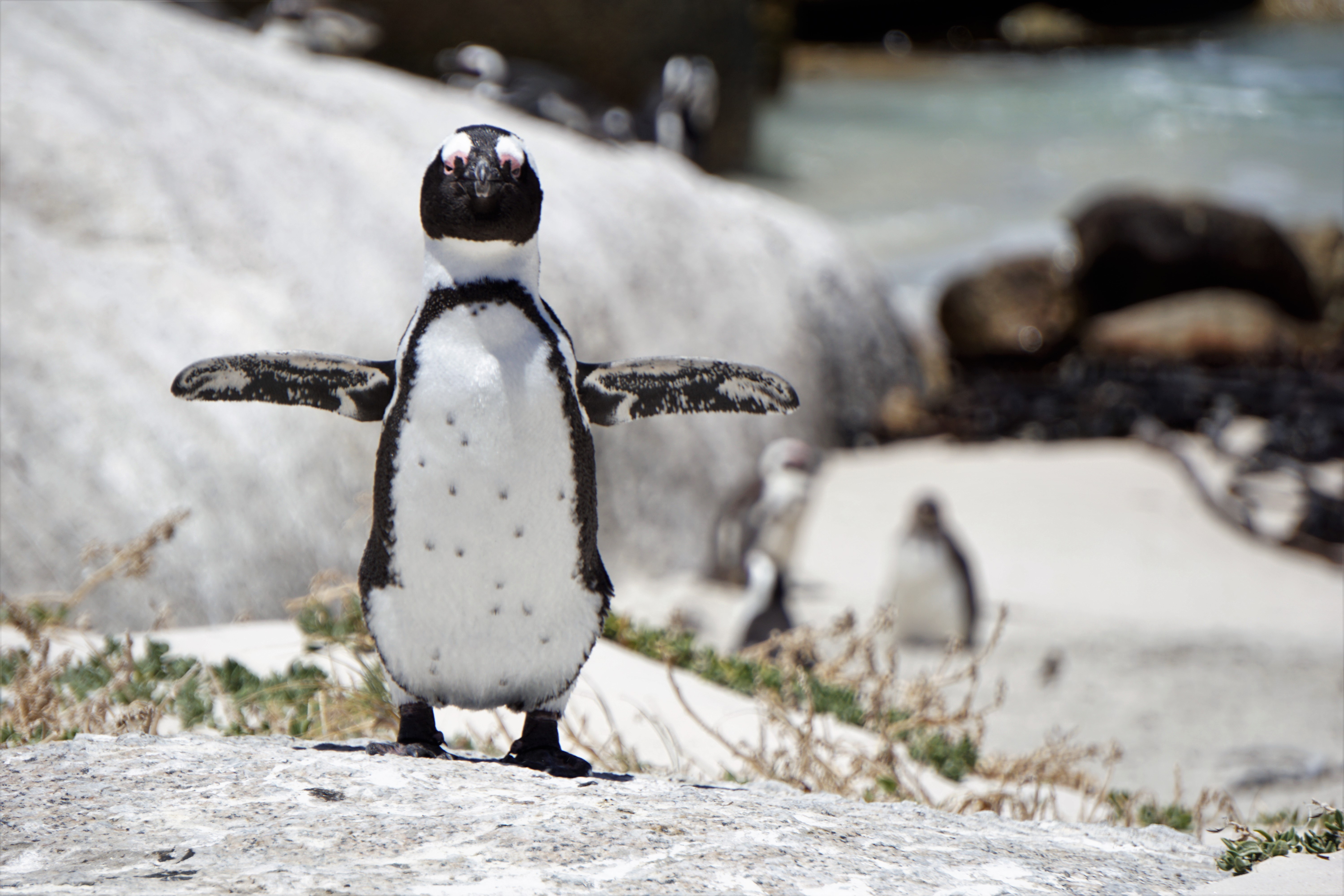 On our last day in Klein Slangkop, we took the train to Cape Town again to meet two of our friends from the coffee shack. Together, we hopped on the sightseeing bus and visited the botanical gardens. They were beautiful, but not that interesting, since spring is over and nothing was blooming.

We were sad that we had to leave our cozy “home” in Klein Slangkop, but it made more sense to stay another few nights in the center of Cape Town, before taking our bus to Windhoek on Thursday.
There was still so much we hadn’t seen yet and it would’ve been too complicated to always take the train to the city.
Our next accommodation was the Anzac backpackers, which lies only a walking distance away from the famous Long Street.

The hostel was empty apart from us, one german girl and a few employees. That was really weird, since we had found it in the “Coast to Coast”-guide and there it was said to be one of the most popular backpackers and not suitable to people who want to sleep at night, because of the wild parties.
We were a bit disappointed to find it almost empty…
We decided to check out Long Street the first night, but even that was empty. We didn’t see any of the famous parties.
To be honest, it was Monday, but still, tourists usually don’t care about week days, do they?
At least we got enough sleep before hiking up the Lion’s head the next morning. It wasn’t windy for a change, but we soon wished it were, because it was really hot and we were covered in sweat when we arrived on the top. 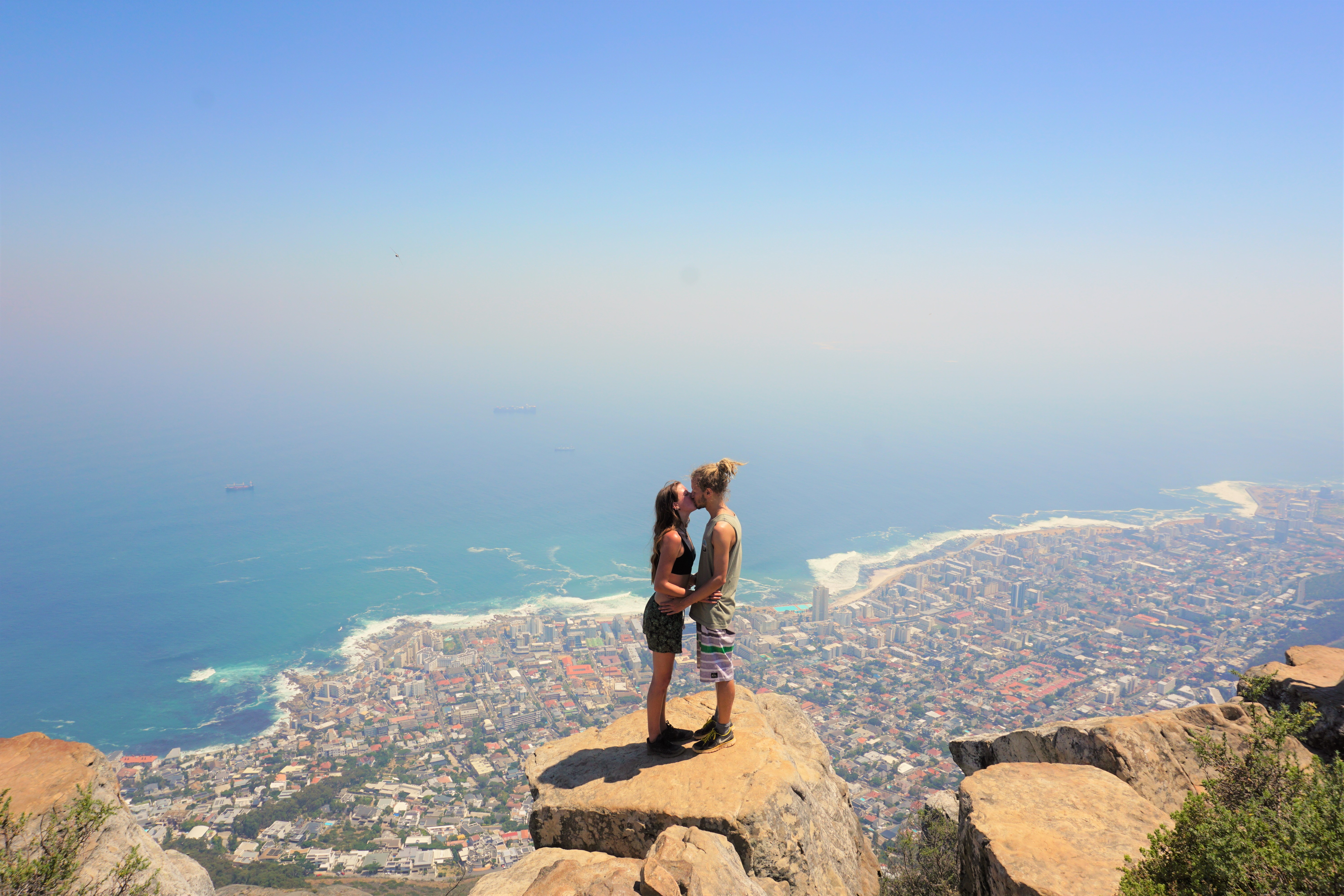 Our plan had been to hike up the Table Mountain on the same day, but after the Lions head hike we’d gotten too much sun already and had a headache, so we bought tickets for the cableway instead. We bought the “sunset special”- tickets that are only valid after 6pm and cost only R130 for both ways.
It was the logical thing to do, since we wanted to watch the sunset from the Table Mountain.
The queue for the cableway was way too long and we were scared that we would miss the sunset, but it turned out that we had mistaken the front of the queue for the end and suddenly we were the first ones to board the cable car.
We know this is a bit mean, but we were not the only ones who had made that mistake and when they suddenly led us to the entrance, we obviously took the opportunity.

We found a nice spot on the edge of the mountain and were able to enjoy the sunset (almost) undisturbed. The sunset was as good as it could possibly be, there was the perfect amount of clouds in the sky and the colors were breathtaking. 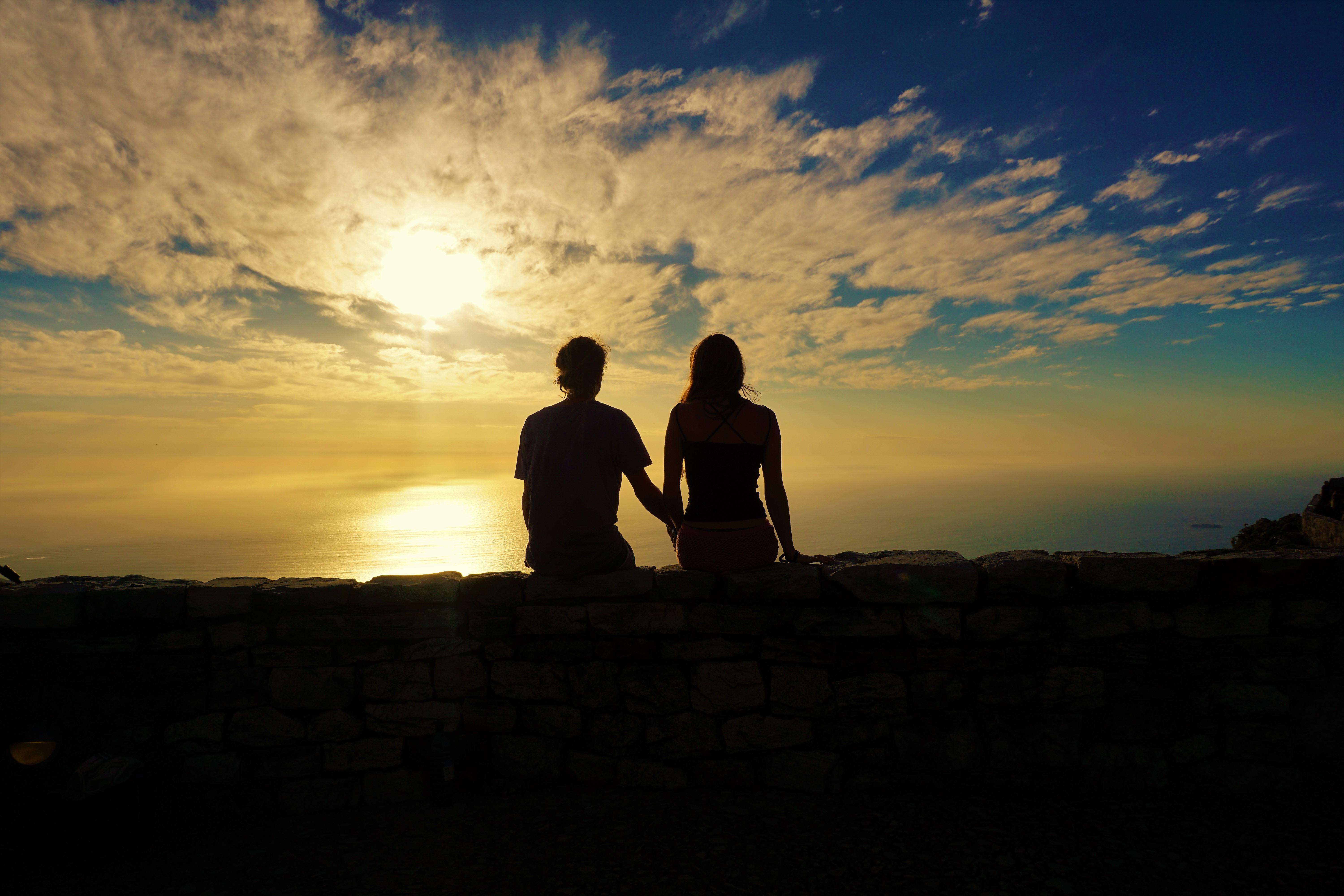 Most people left the mountain as soon as the sun had set, but when it was dark, we walked to the other side and enjoyed the nightly view over the city, with an almost full moon shining brightly above. 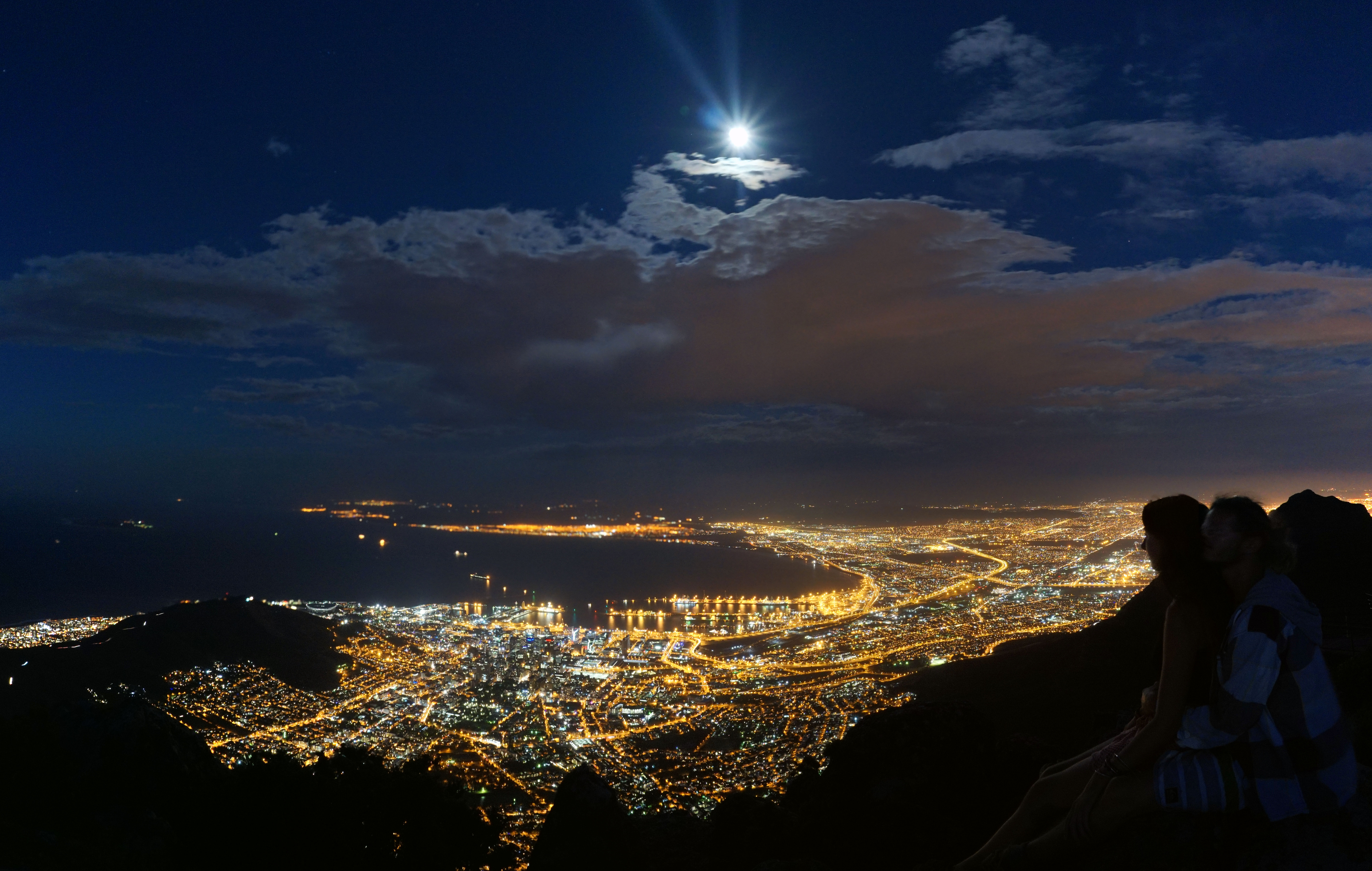 All in all, we consider Cape Town a very cool place. That’s mainly because of the mountains and beaches though, the rest is too crowded in our eyes and the most beautiful beaches have been claimed by rich people, so there’s mansions everywhere…

Now we’re sitting in our InterCape bus, on the way to Windhoek :)
The bus is very comfortable and we would recommend it, but in case you’re not a christian believer, you should bring a music device with a charged battery.
InterCape is a christian company and they “entertain” you with christian movies, commercials and prayers on screen…