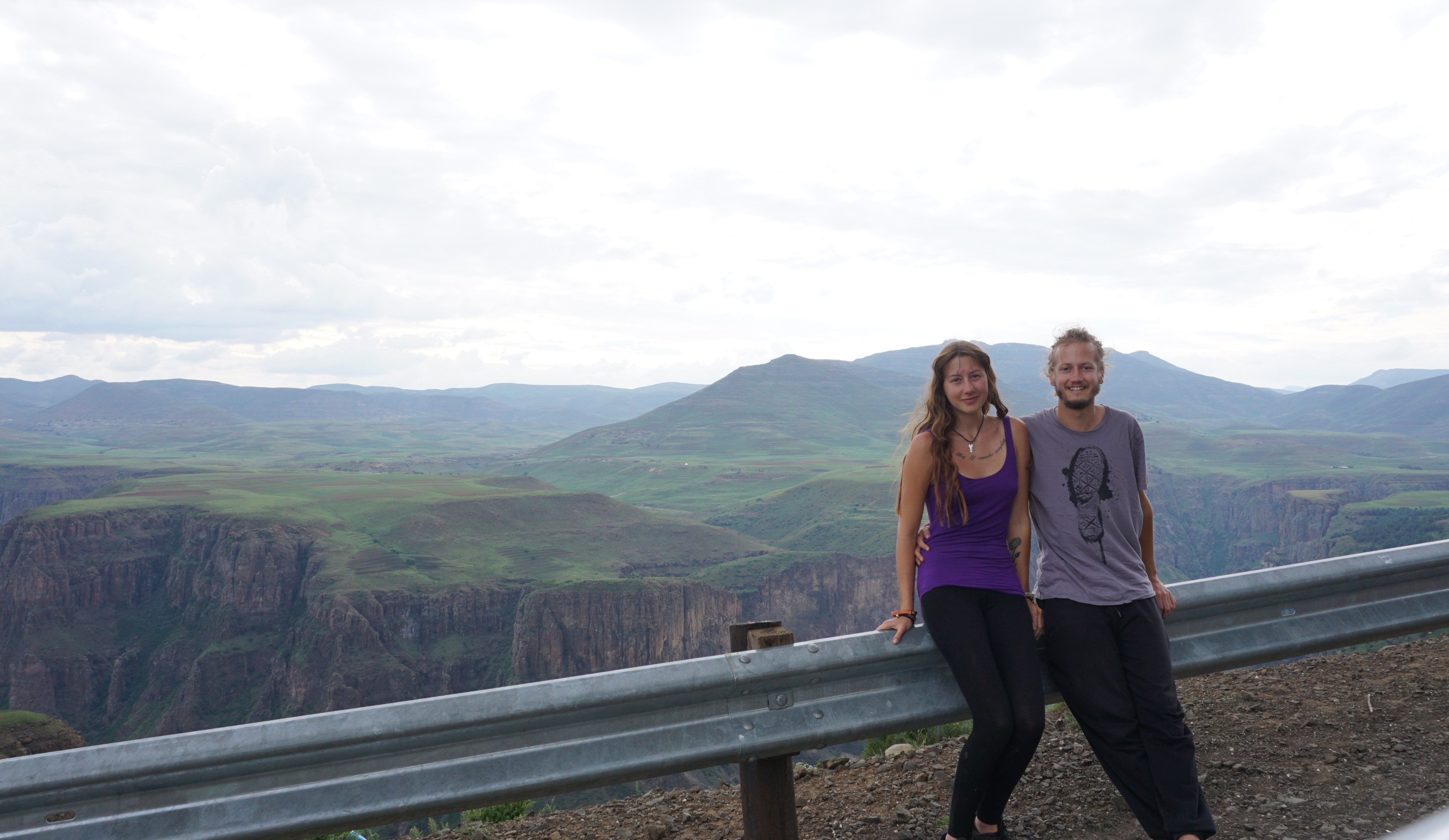 We have yet to look at pictures of the Sani pass to find out what we missed, but right now we’re happy with how things have worked out for us.
The only border post to Lesotho that looked manageable for our car was the Qacha’s nek and the lady at the Sani lodge reception agreed with our idea to drive over that one and said that it wouldn’t be a problem.

For people who don’t know much about Lesotho yet- this country is more or less surrounded by mountains, the Drakensberge. The locals live a calm and rural life and like to keep it that way so they don’t want any tar roads on the borders… there’s only few tourists who rent a 4wheeler and drive through Lesotho- and even fewer who do it without a 4wheeler ;-)

The roads were quite tough anyways and there were certain times when we thought we wouldn’t get far but surprisingly, our low clearance, two-wheeler car managed every huge pothole and every steep climb.
We wouldn’t say that our poor “Iggy” didn’t catch a couple of scratches along the way, but you know… certain things are only done with a rental…

We enjoyed the way to the border very much, despite the “African massage” we got from our car.
Near the border, people live a very natural life surrounded by the southern Drakensberge. They own cows and lots of horses- who roam around freely, just like in Swaziland.
The locals greeted us friendly and waved at us when we drove by.

Crossing the border was just as easy as in Swaziland, but here the border control staff sat in a metal container and gave us the stamp without even looking at us. They did want to know where we were going and when we said that we hadn’t booked a stay yet and that we just wanted to drive around they just exchanged a meaningful look with each other but didn’t say much.

Thanks to our recently downloaded app “iOverlander” (thanks Mikkel & Cecilie) we found a possible campsite and let our google maps navigate us. The drive took us twice as long as the app suggested, but that’s mainly because our “Iggy” has even less power than our “Shiggy” used to have (that was our car in Switzerland) so we usually drove up the mountains at 30 km/h…

We thought that Swaziland was on top of our “most beautiful countries”-list but Lesotho proved us wrong… Words cannot even describe how astonishingly beautiful that country is.
It is breathtaking- literally, since the lowest point of Lesotho lies on 1390 meters above sea.
We honestly don’t know whether we got drunk on altitude or were just happy because of the scenery, but we felt incredibly high while driving up and down the country.

Local people would make weird hand gestures towards us and we still don’t know if it means “slow down”, “give me a ride” or just “hello”.

We drove slowly anyways, not only because of a lack of horse power , but also because there are herds of sheep, goats and cows everywhere.
By the way- the main road on the inside of Lesotho is tarred and in a perfect shape, the road that led to our first destination, the Semonkong lodge, is the opposite.
One of the locals looked at our car when we arrived at the top of the dirt road, which went down to the lodge, and said: “that car is not going down there”. We knew that it would however, going down always works. We were rather worried about going up again…

At the lodge, the campsite turned out to be full (there’s only space for 5 tents) so our only option was to book two dorm beds for R200 per person (the next lodge that was mentioned in our app would’ve been 5 hours away). They were worth it though, we had a clean and comfortable room with a shower and the kitchen we could use was fully equipped. After 7 nights in our tent, our backs were glad to be able to rest on a real mattress for a change…

The next morning we continued our road trip (yes we managed to drive up again) and drove to the Malealea lodge, which was suggested to us by a south African resident who travels Lesotho all the time.

After having installed our tent, we walked a short way into Malealea to take some pictures of the amazing view over the valley.
We had stepped into a garden without noticing and were greeted by four locals, two teenage sisters with their two younger brothers. They were really friendly and we talked for a while (as much as our language difference allowed). Then they started to play local music on their phone and we all danced together, including the youngest brother, who was about 2 or 3 years old. His moves are way better than ours, so we felt a bit embarrassed…

Later we enjoyed a concert of the Malealea band while trying the local beer, Maluti (which is very tasty by the way).

We had planned to drive through Lesotho for another few hours and then go back to south Africa, but google navigation led us over another border post- one that wasn’t even on the map and apparently the border staff isn’t used to having many clients. We got our stamp without problems, but it took a while because the border guard was busy watching his show on tv…


The local money is called “loti”, which we find really cute :) You don’t really need it though because you can pay with South African rand.

Get ready to get dirty when crossing the border… We already mentioned that our Hyundai i10 managed everything but if you want to be on the safe side, drive a 4wheeler ;)

Tap water is NOT drinkable, it is not even recommended for cooking.

There’s not that many places where you can sleep, most lodges are a bit expensive but they support local communities, so that’s a good thing.