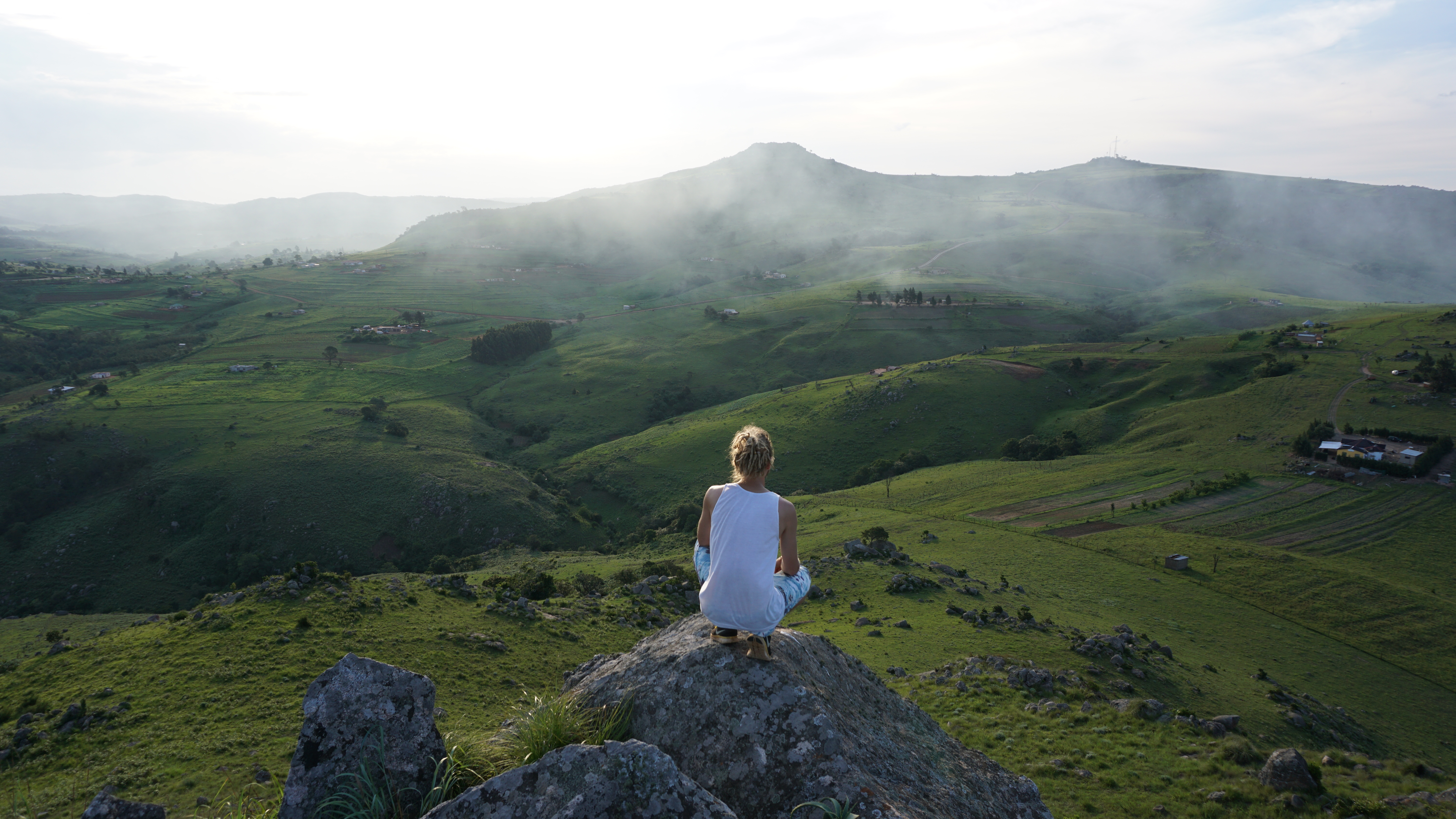 the view on a mountain in Swaziland

It felt like coming home when we drove by wonderful landscapes and through mountains- after having easily crossed the border to Swaziland.
Instead of grim looking people in uniforms we got our arrival stamps from colorful dressed people who greeted us nicely and wished us a pleasant stay- something that would be rather rare in Europe… though we have to admit that even in Switzerland the border guards sometimes are friendly.

Like Switzerland, Swaziland has lots of cows- but Swazi cows look much happier since they are allowed to keep their horns and walk around freely. It’s normal to have to wait when cows are crossing the street. You do not want to hit a cow- of course for the cow’s sake but also because it would cost you quite a lot of money.

Life expectancy in the kingdom of Swaziland is extremely low- only 51 years. About every fourth person in this country is HIV-positive. Apart from that, the kingdom seems to be a well-functioning state. You feel much safer here than in South Africa. People in general seem modest and calm and despite the poverty there is only little crime.
What we personally found great is that you don’t see any big fast food restaurants, except for KFC. This is (according to a resident) because big companies have to pay 51% of their profit to the king. Apparently, only KFC is okay with that law. That’s a shame in our eyes, a country without any fast-food giants sounds like paradise, doesn’t it?
Apart from that chicken hell however, Swaziland still looks like a paradise. Due to poverty, the land is scarcely inhabited and nature is allowed to spread.
We had just missed the draught and arrived when everything was green and looked a bit like Ireland.

For the first time on our trip, we booked a campsite at a backpacker’s- the legends backpacker’s lodge, to be precise.
This is the best way to meet fellow travelers, and we instantly made friends.
Two of them are Mikkel and Cecilie, a couple from Denmark who plan to be on a world trip for 2 years and have started in South Africa, like us. They too have a website and blog about their adventures, but unlike us they have created their website from scratch and have some incredible features on it. You can check it out on www.maptravellers.com:)

Our main activity in Swaziland (apart from drinking the local beer, Sibebe) was hiking. The country is really small and you can see quite much of it from a mountain top.

We left the legends backpacker’s lodge after a two-night’s stay and decided to travel further north (where we came from) with Mikkel and Cecilie. We found a beautiful place to stay and again went hiking. This time we witnessed a sunset, a huge lightning storm and a forest fire all at once.

Our lodge was situated on a hill and we had an amazing view over the valley. It was also incredibly quiet up there and the night was calm apart from two puppies scratching on our tent. We were tempted to let them in but the risk of them leaving a little “gift” on our sheets was too high. There were three Jack Russels in the lodge-the two puppies and one older lady. The youngest puppy was called Moby, which we found very cute until we learned that it means “ugly” in the local language…

On our last day in Swaziland we decided to go to one of the handicrafts markets, which are placed alongside of the road, despite worrying about our small backpacks. There are just too many beautiful handmade souvenirs and we can always send a package back home, if they get too heavy to carry.
The little hippos we bought don’t need too much space and are a Christmas gift from us to ourselves…


Swaziland is one of the most beautiful countries we have seen (so far). It is definitely worth a visit, especially for people who like (almost) untouched nature. If you love Switzerland, you will love Swaziland even more. It’s not as crowded and loud, but the scenery is quite similar and it’s warmer, which is a big plus!

The people in Swaziland are extremely open-minded and friendly. Some live on their small little farms and own a few cows, others have a Porsche AND a Mercedes parked in their garage- but they too are farmers. Instead of crops they grow “Swazi gold”, something you should definitely try when you visit the country ;-)

In general, prices are a bit lower than in South Africa but you can pay with ZAR.
Apart from the Swazi gold, this country is famous for its handicrafts markets. You can find them everywhere when you drive around and they’re the perfect spot to buy a beautiful and unique souvenir.
There is a glass factory as well where all kinds of glass sculptures are created. It’s called “Ngwenya Glass” and its staff forges beautiful animals from recycled glass. They also use recycled newspapers and cooking oil (mostly from KFC) in the process. The little glass hippo we bought doesn’t smell like chicken though, so we don’t mind.