Our last couple of weeks in Switzerland were quiet stressful and emotionally challenging because we had to say goodbye to our loved ones and there were certain doubts that not everything would work out the way we had planned.

Even though we were a bit late with our last arrangements (René called the military to get signed off only days before our departure) everything turned out just fine.
There was a bit of anxiety when we heard that Lufthansa was on strike. Luckily though, only the first of our three flights was with Lufthansa and it was not cancelled.
The hardest part however was having to say goodbye to our families and friends. Already two weeks before our departure every single day we had at least one visit planned.
It was cool to have something fun planned every day but whenever the day was coming to an end we got really sad. The hardest part was when some family members and friends got really emotional. It made us feel a bit guilty.

The big day came though and after we were delivered to the airport on time we caught our first flight and flew to Frankfurt. In Frankfurt we only had to wait 1,5 hours for the next flight which took us to Addis Ababa. By the way, we’re in love with Ethiopian Airlines :-) Our requested vegan food was delicious and for once it was actually 100% vegan, even the bread! We met a woman on the plane who moved from Switzerland to Addis Ababa and what she told us about Ethiopia made us regret that we hadn’t put it on our travel list… watching the ethiopian movie “lamb”, which shows the beautiful landscapes of this country, didn’t help.
We only had 2 hours in Addis Ababa before our last flight took us to Johannesburg. We did however witness a beautiful sunrise through the airport window…
The food on the last flight was disappointing. For some reason they had no vegan meals even though it was still the same airline. They brought us lacto-vegetarian food instead but luckily, the main course was still vegan.

After our arrival in Joburg, we took a taxi to the Westmoreland lodge, where we had booked the first two nights of our journey.
After a desperately needed nap it was already dark outside and we were starving, despite having been stuffed with way too much food on the flight.
Many travelers warn about Joburg, some even advised us not to visit this city at all, so we were scared to go out and look for a place to eat. A friendly guy who grew up in South Africa offered to walk us to a restaurant and of course, we didn’t decline. He told us to leave everything in the hotel room- even our phones- and only carry the amount of money that we need for a meal. That made us even more nervous- hearing something like that from a resident. All the houses in the neighborhood are protected by high spiked fences or barbed wire- a scary sight.
The next morning we barely got out of bed because we were still unbelievably tired. We followed the advice of the hotel manager and downloaded the uber-app to order a taxi. 6 minutes later we got picked up and driven to the park station for R79 which is about $ 5.80 and therefore pretty cheap for a 20 minutes ride. Actually the driver told us that since it was our first ride with an uber taxi, it was free. We refused though.
At the park station we took the city sightseeing hop on/hop off bus instead of a normal bus, because the regular buses didn’t go where we wanted to and taking a taxi to every single place we wanted to visit would have cost us more than the R190 ($ 13,5 ) we paid for the sightseeing tour. Which turned out to be great by the way- we learned many interesting facts about Joburg :-)
We hopped off at the Carlton center to enjoy the view from this 50 stories and 223m high building- which is the highest in Africa. From there you can see almost everything of Joburg. We regretted having left our Sony Alpha in the hotel (for exaggerated carefulness) but our old camera and our phones took some good pictures too. After 30 minutes on the tower, we hopped back on the bus and got sunburned before we arrived at the Apartheid museum.
With our sightseeing tickets we got a discount at the entrance and paid only R65 ($ 4.80) instead of R80 ( $ 5.70).
After 1,5 hours of reading about Nelson Mandela we had enough and went to the museum restaurant to fill our empty bellies with a delicious vegan vegetable curried pie. We wondered aloud why the Apartheid museum was only about Nelson Mandela. Sure he played an important role but there had to be more to it. So René checked the map of the museum and realized that we hadn’t seen all of it yet. It was already about 3.30pm and the last bus was supposed to leave at 5pm so we went back inside to check out the rest. The “rest” turned out to be the whole Apartheid museum though! We hadn’t even been inside yet, Mandela’s biography was a special exhibition which was in a different part of the building. The whole Apartheid exhibition was more diverse and really got us hooked. Unfortunately we had wasted too much time on Mandela (don’t get me wrong, his exhibition was very interesting too) and while we were watching a movie about a bloody riot in the 70ties, the whole museum got dark and they wanted to close. We still learned a lot about South Africa’s history and we highly recommend you to visit the Apartheid museum if you’re ever in Joburg!
Back at the park station we found a food market and bought some fresh potatoes and vegetables for only R15 (about $ 1) which we cooked in the kitchen of our lodge. Staying at a place with a kitchen is really rewarding and saves a lot of money!

The next morning we asked the manager of our lodge to book one more night for us. We couldn’t stay in the same room though and the only free one was a family suite for R400/ night (about $30). This is slightly out of our budget but we agreed anyway and the suite turned out to be worth way more than the R400 (in our opinion).
Our plan was to go to Pretoria the day after so we downloaded the Gautrain-app to always have a timetable available. Then we took an uber taxi directly to the Orlando towers which took us about 30 minutes and cost R226 ($16). We knew that there would probably be no Wifi at the towers, so we asked the driver if he could pick us up later. He gave us his personal cell phone number.
At first, we only wanted to take some pictures to stay on our budget but then we thought what the hell and decided to get on top. The lift was busy though so we waited at the bar (right next to the towers) and fell in love with black label beer ;-) It didn’t help to calm Nici’s nerves though and she had to fight against her anxiety of heights the whole time. It didn’t help that the lift got stuck halfway down and our guide had to climb on top to fix it but apparently that happens all the time and is not dangerous. Oh and the view was amazing :-) It was a different feeling than on the Carlton center, because on the Orlando towers there are no glass walls so you feel the wind and get the feeling that you’re actually higher even though the towers are “only” 100 meters.
We did not do the bungee jump or the free fall although René seriously considered it…

After having taken enough pictures of the towers we walked a bit through Soweto and ended up buying a cheap smartphone at a mall to always be able to use the uber app. Two friendly girls who worked in one of the stores wanted to take a picture with us and asked if they could introduce us to their boss. Why not? Then the five of us spent an hour trying to get our new phone working and when finally the data was running, we realized that we could not use uber because the phone has a too bad CPU. Great. One of the girls told us that she considered us really brave for visiting Soweto on our own and that we were the only white people around. We already had noticed that people kept staring at us but they were all really friendly and greeted us nicely, some kids even waved while walking by :-) Only a security man did not seem too pleased when we were waiting at the mall entrance for 45 minutes (we had called our friendly taxi driver to pick us up) but he didn’t say anything.
Sello, the taxi driver, fought his way through the rush hour and after picking us up he told us that this was a private ride, not an uber ride, then he drove us around in Soweto, showed us the Mandela house and other big spots and back at our lodge, he even let us decide what we wanted to pay.

All in all we had a great three days in Johannesburg and we’re already looking forward to Pretoria :-)

Exciting and colorful city with all kinds of different buildings and people. Unfortunately a lot of people are scared of Joburg (we were too) and this kept us from exploring the city on our own (apart from that afternoon in Soweto). This is a shame because now we actually think that Joburg is a lot safer than the rumors imply.
Uber taxis are available all the time however, which kept us mobile.

We recommend: the Apartheid museum, the Orlando towers in Soweto and the view on top of the Carlton center.

We advise you to: download the uber-app, buy food from the markets, dress simple when leaving the hotel (jeans, sneakers, t-shirt) and only take the amount of money that you need for the day, keep your expensive camera (if you have one and want to take it along) in a bag instead of hanging around your neck.

What we especially liked: even though Joburg is huge, many people greeted us friendly on the streets :-) 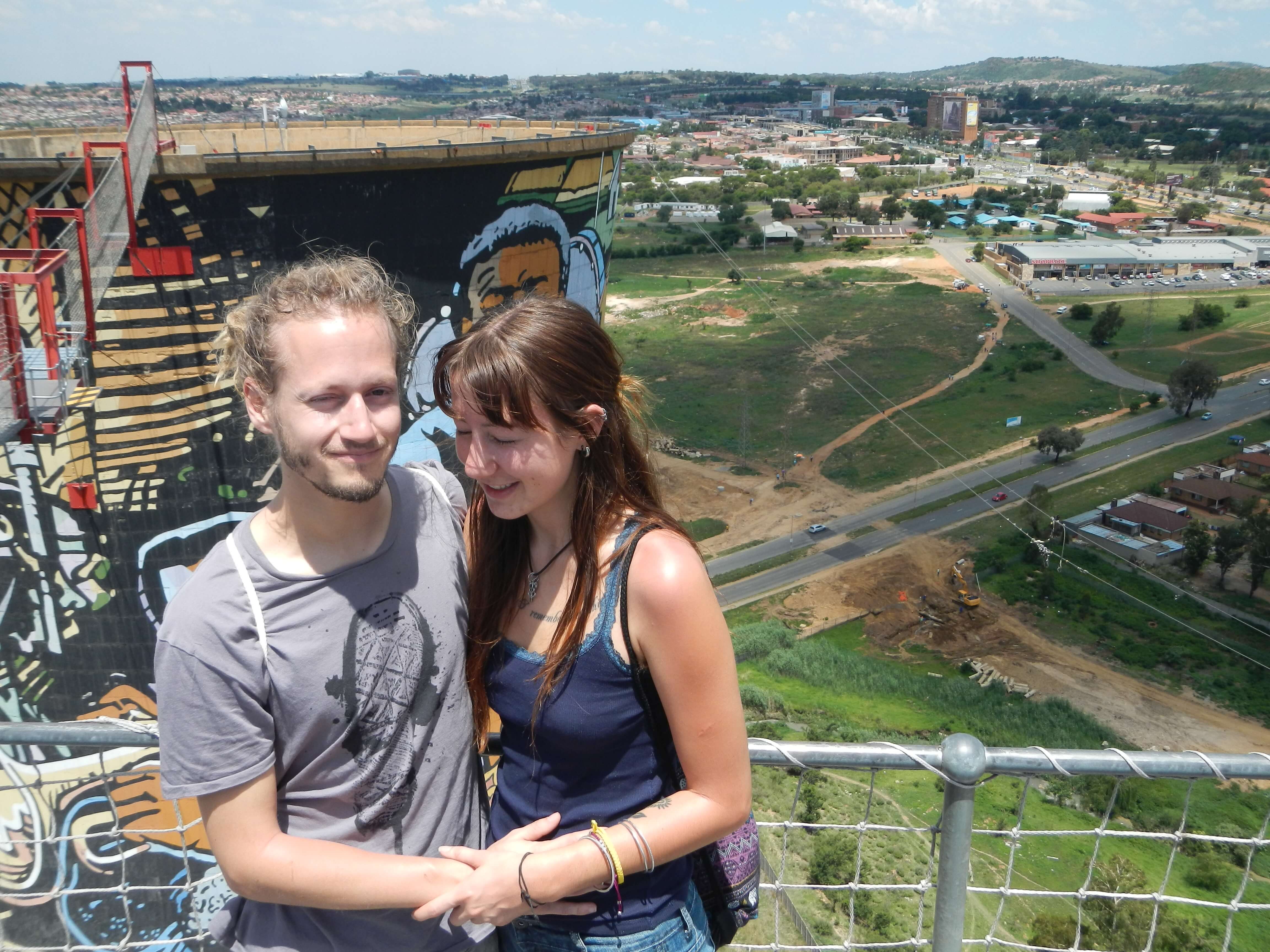